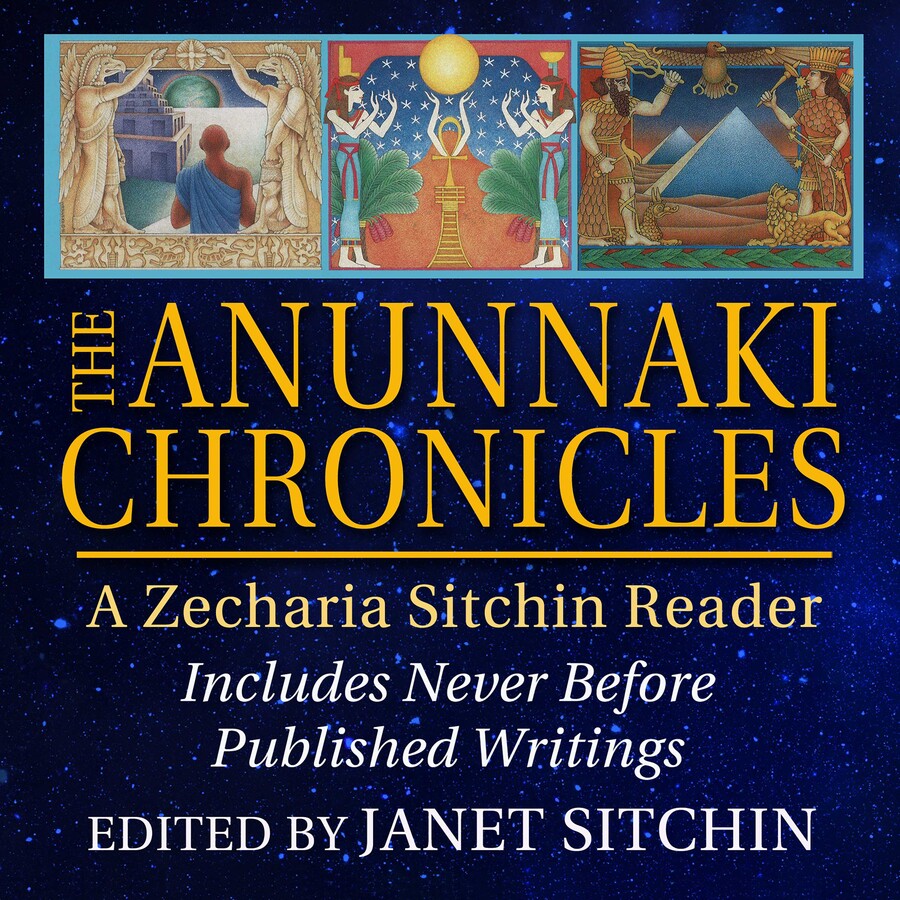 • Each piece includes an introduction, offering context and insight into Sitchin’s passionate work and revealing the man behind the theories

• Explains the genesis of The 12th Planet, the Anunnaki influences on the Sumerian civilization, the orbit of Nibiru, the prehistory of the Americas, the extraterrestrial origins of modern man, and much more

What if the tales from the Old Testament and other ancient writings, such as those from Sumer, Babylon, Egypt, and Greece, were not myths or allegory but accounts of actual historical events? Known for his ability to read and interpret ancient Sumerian and Akkadian clay tablets, Zecharia Sitchin (1920-2010) took the words of our most ancient ancestors as fact and, through decades of meticulous research, showed that they revealed a coherent narrative about the true origins of humanity and civilization. Drawing both widespread interest and criticism, his Earth Chronicles series of books, beginning with The 12th Planet, detailed how humanity arose after the arrival of the Anunnaki (“those who from Heaven to Earth came”), alien “gods” who created modern man in their own image and imparted gifts of civilizing knowledge.

Providing an insider’s look into the decades of research behind Zecharia Sitchin’s complete works as well as an in-depth overview of his theories, this collection includes carefully selected chapters from the Earth Chronicles series as well as never-before-published letters, articles, and lectures. We learn about the genesis of The 12th Planet in “The Book as a Story,” the Sumerians and their Anunnaki influences in “The Sudden Civilization,” the orbit of Nibiru in “UFOs, Pyramids, and the 12th Planet,” the prehistory of the Americas in “Cities Lost and Found,” the extraterrestrial origins of modern man in “The Cosmic Connection--DNA,” and much more. We get to read never-before-published lectures, culled from Sitchin’s decades of presentations, as well as the article that spurred the writing of There Were Giants Upon the Earth.

Each piece includes an introduction by Sitchin’s niece, offering context and insight into Sitchin’s passionate work. These introductions reveal the man behind the theories, a world traveler known for his scholarship, dry humor, and precisely chosen words. If his theories are true, as Sitchin wholeheartedly believed, then this collection presents some of the most important knowledge we have of our origins and future.

UFOs, Pyramids, and the Twelfth Planet

Lecture at the UFO Conference at the Great Pyramid, January 1992

Over the years, Zecharia Sitchin was often asked to speak at various conferences. In January 1992, he spoke at the UFO Conference at the site of the Great Pyramid in Giza, Egypt. Not only does he mention biblical references to UFOs, but he also explains who built the Giza Pyramids--and why--and tells us a bit about what the Anunnaki were doing here on Earth.

Whenever I am asked about UFOs--What do I think about UFOs, do I think they exist, do I believe the people who encountered them--I am ready with my own UFO story.

It is one about a young man who was hiking from his hometown to another place. As it got dark at the end of the day, he lay down to sleep in the field. In the middle of the night he was awakened--not by noises but by bright lights. Half asleep, half blinded by the bright light, he saw a UFO. It was hovering above the ground. A ladder or steps were coming down from an open hatch or doorway, reaching to the ground. Some of the occupants of the UFO were going up and down this ladder.

He could see their commander, standing at the open door silhouetted against the light inside. And, overcome with awe and fear, the young man fainted. When he came to, the UFO he had seen was gone. But the young man knew what he had seen. Here is what he had realized: “Indeed,” he said to himself, “the Lord is present in this place, and I knew it not. . . . How awesome is this place! It must be the place of the gods, and this is their gateway to heaven!” Now, what should we make of this story? What would you think if the young man rushed in here and told us all that? What would the media make of it? Would they ridicule it, or report it as a truthful experience?

As it happens, the tale has been reported in a publication that I consider very, very reliable. It is called the Bible. And, as some of you might have guessed, the story that I told you is the so-called Jacob’s dream. It is one UFO encounter about which I have no doubts, because I am a great believer in the veracity of the Hebrew Bible.

This UFO report, in chapter 28 of Genesis, contains a great deal of important information. It shows us that in biblical times people were awed, but not mystified, by the phenomenon that nowadays is called the UFO enigma. To Jacob what he had seen was not a UFO, an UNidentified Flying Object, but one that he did identify at once. He knew what it was, and he realized at once that he had inadvertently chosen as his rest place for the night a spot that was adjacent to a UFO base. He knew that the vehicle was operated by “The gods”; and he realized that “this was their gateway to heaven.”

Jacob’s vision is not the only biblical tale of flying craft coming from and disappearing into the skies. There is the story of the fiery chariot that carried the Prophet Elijah to heaven, and the story of the flying machine that the Prophet Ezekiel had seen. Such stories illustrate the point that I wish to impress upon you: If you believe in the Bible, you must accept the possibility of UFOs.

One who was certain that the tales were true was the famed Greek conqueror Alexander the Great. In the fourth century B.C. he came to these lands in search of immortality. He did so because he was convinced that he was entitled to live as long as the gods; and the reason was the rumors in the Macedonian court that the real father of Alexander was not his father Phillip, but an Egyptian god who, disguised, came one night into Alexander’s mother’s quarters and there fathered the future conqueror. The name of that Egyptian god was Amon-Ra, meaning “RA, the Hidden One.”

Fighting his way through Asia Minor (today’s Turkey) and the lands that are now Syria, Lebanon, and Israel, Alexander reached Egypt. His first stop, his very first stop, was at a city called by the Egyptians ANU, and known to us from the Hebrew Bible by the name ON. The Greeks called it “City of the Sun,” Heliopolis. There, in a shrine dedicated to the great god, there was on display the actual object in which the god had come to Earth from the heavens, his so called celestial boat. It was a well-known shrine, and once a year its Holy of Holies was opened to admit the Pharaoh to see the sacred object. Thousands of pilgrims were gathered at Heliopolis at that time, not unlike the thousands who come once a year to Mecca to venerate the Ka’aba, the sacred black stone.

No one knows where that object had vanished to, or when it disappeared. Indeed, one theory is that it was taken to Mecca and that it was placed within the large boxlike structure that houses the Ka’aba and which no one can ever enter. But we do know how that object had looked, because a small stone replica of it was discovered by archaeologists.

I show a picture of this replica above. Clearly, what Alexander went to see and what he did see was a UFO. . . . Except that for him, as for Jacob 1,500 years earlier, it was not an UN-identified Flying Object but the remains of a very identifiable command module of a spacecraft.
Zecharia Sitchin

“Janet Sitchin’s collection The Anunnaki Chronicles is a worthy successor to her uncle Zecharia Sitchin’s life’s work. It expands and enhances our understanding of who the Anunnaki were, why they came here, and why they may someday return.”

“It is almost impossible to quantify the effect that Zecharia Sitchin had on our understanding of the origins of our species and the mysterious activity of the Anunnaki on planet Earth. His work inspired millions; his research shattered our rigid belief system and caused our history to be rewritten by many that followed him. Zecharia remains one of my key inspirations and a valuable source of critical information in the area of ancient human history and the enslavement of the human race.”

– Michael Tellinger, author of Slave Species of the Gods: The Secret History of the Anunnaki and Their

“Well researched and persuasive . . . Sitchin brings to [The 12th Planet] the logic and scholarship so often lacking. . . . He demonstrates the flaws in established theories and exposes a few ancient hoaxes.”

“A dazzling performance. . . . Sitchin is a zealous investigator into man’s origins . . .”

"An excellent selection of texts highlighting the key breakthroughs of Zecharia Sitchin about the Sumerians’ feats in bioengineering, microchips, and astronomy, and how these are corroborated by new scientific discoveries. A must read for any one interested in the high-tech civilization that preceded our own by a few millennia at least."

– Chris H. Hardy, PhD., systems scientist, author of DNA of the God and The Sacred Network

"Providing an insider’s look into the decades of research behind Sitchin’s complete works as well as an in-depth overview of his theories, this collection includes carefully selected chapters from the Earth Chronicles series as well as never-before-published letters, articles, and lectures."