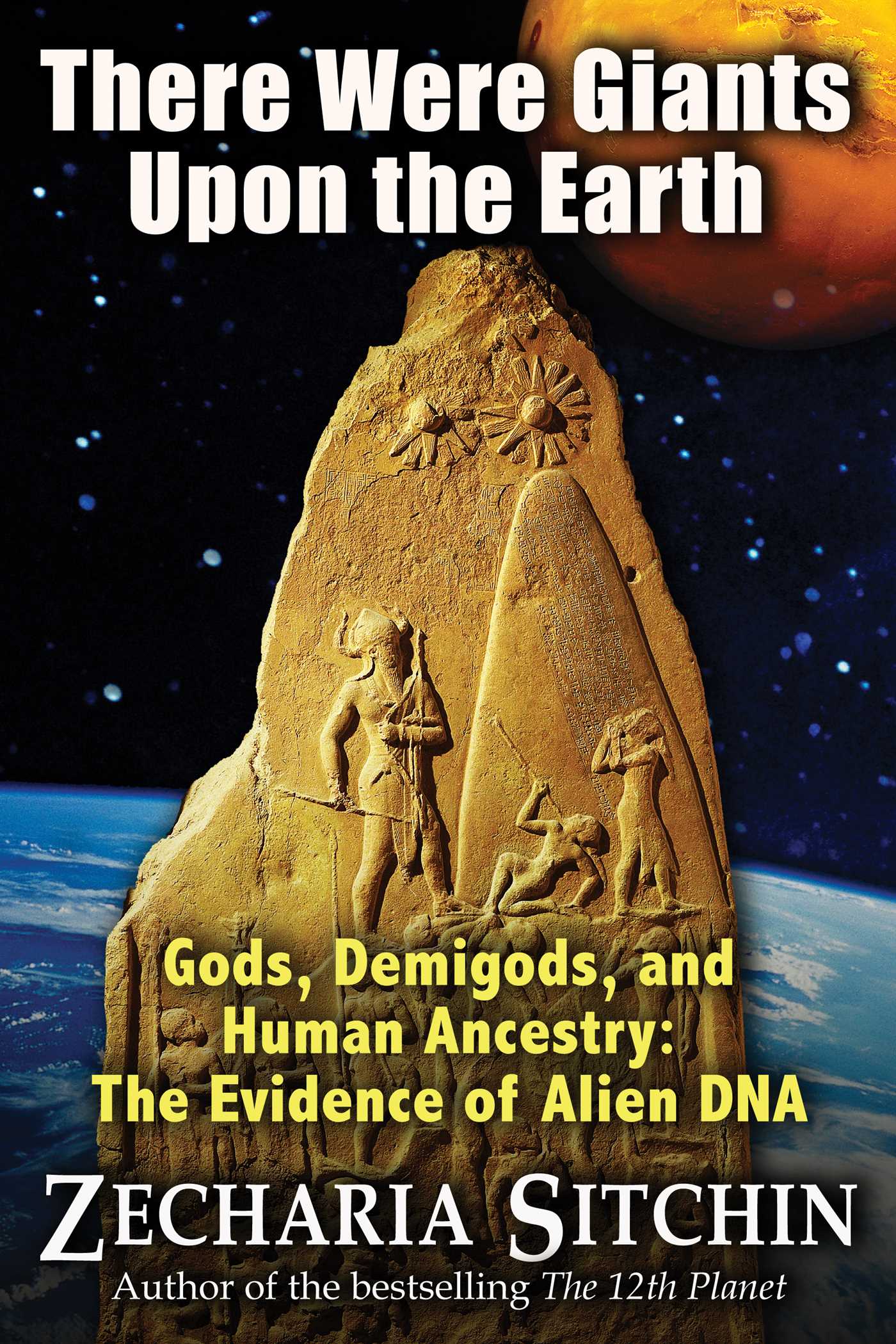 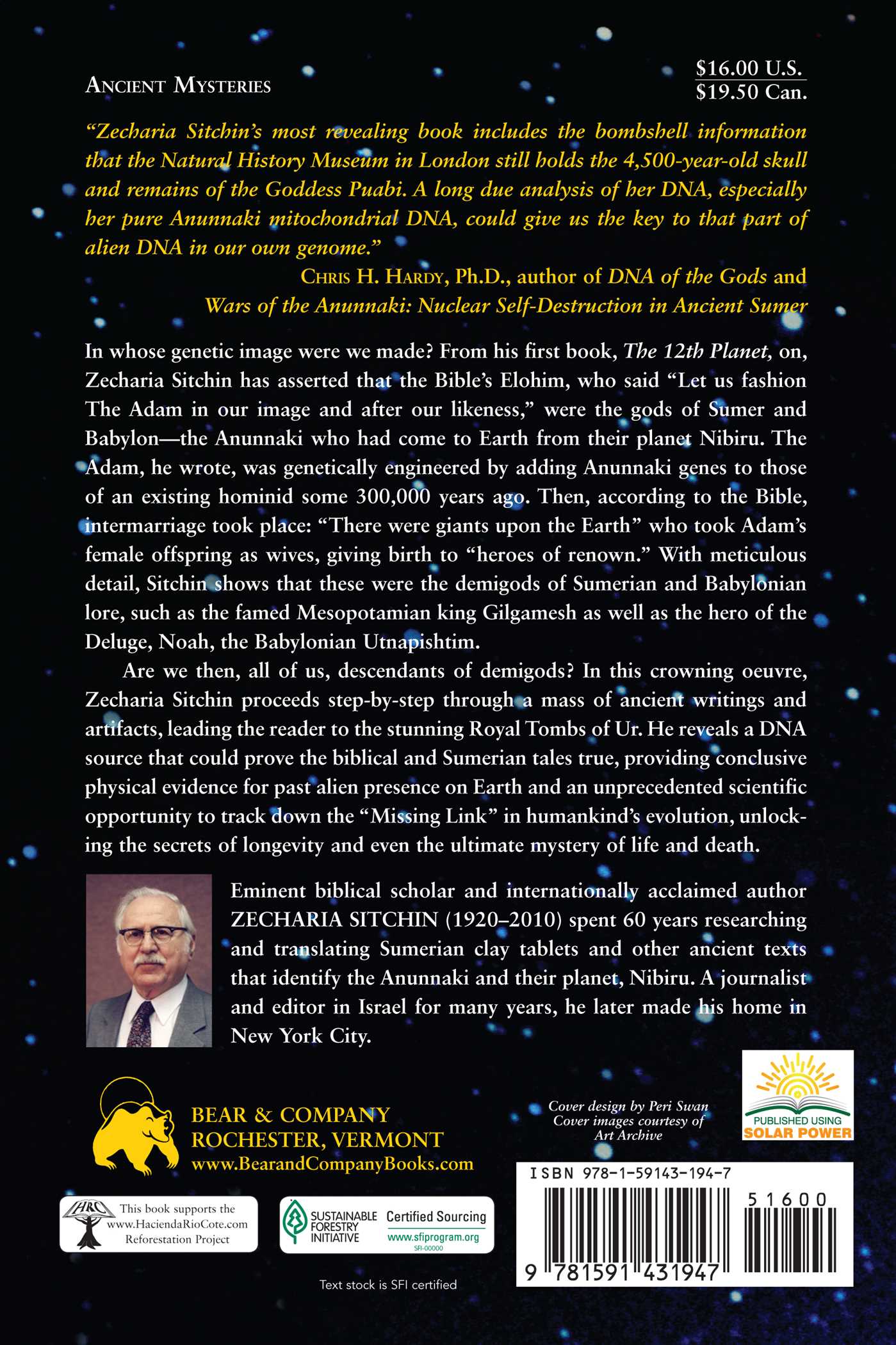 There Were Giants Upon the Earth

Gods, Demigods, and Human Ancestry: The Evidence of Alien DNA

The crowning work of the bestselling Earth Chronicles series

• Identifies and describes the demigods, such as Gilgamesh, descended from these visitors

• Outlines the tests of this physical evidence of alien presence that could unlock the secrets of health, longevity, life, and death

In whose genetic image were we made? From his first book The 12th Planet on, Zecharia Sitchin has asserted that the Bible’s Elohim, who said “Let us fashion The Adam in our image and after our likeness,” were the gods of Sumer and Babylon--the Anunnaki who had come to Earth from their planet Nibiru. The Adam, he wrote, was genetically engineered by adding Anunnaki genes to those of an existing hominid, some 300,000 years ago. Then, according to the Bible, intermarriage took place: “There were giants upon the Earth” who took Adam’s female offspring as wives, giving birth to “heroes of renown.” With meticulous detail, Sitchin shows that these were the demigods of Sumerian and Babylonian lore, such as the famed Mesopotamian king Gilgamesh as well as the hero of the Deluge, the Babylonian Utnapishtim.

Are we then, all of us, descendants of demigods? In this crowning oeuvre, Zecharia Sitchin proceeds step-by-step through a mass of ancient writings and artifacts, leading the reader to the stunning Royal Tombs of Ur. He reveals a DNA source that could prove the biblical and Sumerian tales true, providing conclusive physical evidence for past alien presence on Earth and an unprecedented scientific opportunity to track down the “Missing Link” in humankind’s evolution, unlocking the secrets of longevity and even the ultimate mystery of life and death.

And It Came to Pass

And it came to pass, When men began to multiply on the face of the Earth and daughters were born unto them, that the sons of God saw the daughters of men that they were fair, and they took them wives of all which they chose.

There were giants upon the Earth in those days and also thereafter too, When the sons of God came in unto the daughters of men and they bare children to them--the same Mighty Men of old, Men of Renown.


The reader, if familiar with the King James English version of the Bible, will recognize these verses as the preamble, in chapter 6 of Genesis, to the story of the Deluge, the Great Flood in which Noah, huddled in an ark, was saved to repopulate the Earth.

The reader, if familiar with my writings, will also recognize these verses as the reason why many decades ago, a schoolboy was prompted to ask his teacher why it is “giants” who are the subject of these verses, when the word in the original Hebrew text is Nihilism--which, stemming from the Hebrew verb Navel, means to fall down, to be downed, to come down--and in no way ‘giants’.

The schoolboy was I. Instead of being congratulated on my linguistic acumen, I was harshly reprimanded. “Sitchin, sit down!” the teacher hissed with repressed anger. “You don’t question the Bible!” I was deeply hurt that day, for I was not questioning the Bible--on the contrary, I was pointing out the need to understand it accurately. And that was what changed my life’s direction to pursue the Nefilim. Who were they, and who were their “Mighty Men” descendants?

The search for answers started with linguistic questions. The Hebrew text does not speak of “Men” who began to multiply, but of Ha’Adam--“The Adam,” a generic term, a human species. It does not speak of the sons of “God,” but uses the term Bnei Ha-Elohim--the sons (in the plural) of The Elohim, a plural term taken to mean “gods” but literally meaning “The Lofty Ones.” The “Daughters of The Adam” were not “fair,” but Tovoth--good, compatible . . . And unavoidably we find ourselves confronting issues of origins. How did Mankind happen to be on this planet, and whose genetic code do we carry?

In just three verses and a few words--forty-nine words in the original Hebrew of Genesis--the Bible describes the creation of Heaven and Earth, then records an actual prehistoric time of early Mankind and a series of amazing events, including a global Flood, the presence on Earth of gods and their sons, inter-species intermarriage, and demigod offspring . . .

And so, starting with one word (Nefilim), I told the tale of the Anunnaki, “Those who from Heaven to Earth came”--space travelers and interplanetary settlers who came from their troubled planet to Earth in need of gold and ended up fashioning The Adam in their image. In doing so I brought them to life--recognizing them individually, unraveling their tangled relationships, describing their tasks, loves, ambitions, and wars--and identifying their inter-species offspring, the ‘demigods’.

I have been asked at times where my interests would have taken me were the teacher to compliment rather than reprimand me. In truth, I have asked myself a different question: What if indeed “there were giants upon the Earth, in those days and thereafter too”? The cultural, scientific, and religious implications are awesome; they lead to the next unavoidable questions: Why did the compilers of the Hebrew Bible, which is totally devoted to monotheism, include the bombshell verses in the prehistoric record--and what were their sources?

I believe that I have found the answer. Deciphering the enigma of the demigods (the famed Gilgamesh among them), I conclude in this book--my crowning oeuvre--that compelling physical evidence for past alien presence on Earth has been buried in an ancient tomb. It is a tale that has immense implications for our genetic origins--a key to unlocking the secrets of health, longevity, life, and death; it is a mystery whose unraveling will take the reader on a unique adventure and finally reveal what was held back from Adam in the Garden of Eden.

Sumer, it is now known, was the land of a talented and dexterous people in what is now southern Iraq. Usually depicted in artful statues and statuettes in a devotional stance, it was the Sumerians who were the first ones to record and describe past events and tell the tales of their gods. It was there, in the fertile plain watered by the great Euphrates and Tigris rivers, that Mankind’s first known civilization blossomed out some 6,000 years ago--“suddenly,” “unexpectedly,” “with stunning abruptness,” according to all scholars. It was a civilization to which we owe, to this day, virtually every ‘First’ of what we deem essential to an advanced civilization: The wheel and wheeled transportation; the brick that made (and still makes) possible high-rise buildings; furnaces and the kiln that are essential to industries from baking to metallurgy; astronomy and mathematics; cities and urban societies; kingship and laws; temples and priesthoods; timekeeping, a calendar, festivals; from beer to culinary recipes, from art to music and musical instruments; and, above all, writing and record keeping--it was all first there, in Sumer.

The philological recognition of Sumerian began, as we have illustrated, not through the discovery of the Sumerians’ own tablets, but through the varied use, in Akkadian texts, of ‘loan words’ that were not Akkadian; the naming of gods and cities by names that made no sense in Assyrian or Babylonian; and of course by actual statements (as that by Ashurbanipal) about the existence of earlier writings in ‘Shumerian’. Though virtually everything that we consider essential to a developed civilization has been inherited from the Sumerians, many people still respond with a blank “Who?” when they hear the word ‘Sumerian’ . . .
Zecharia Sitchin

There Were Giants Upon the Earth

Gods, Demigods, and Human Ancestry: The Evidence of Alien DNA