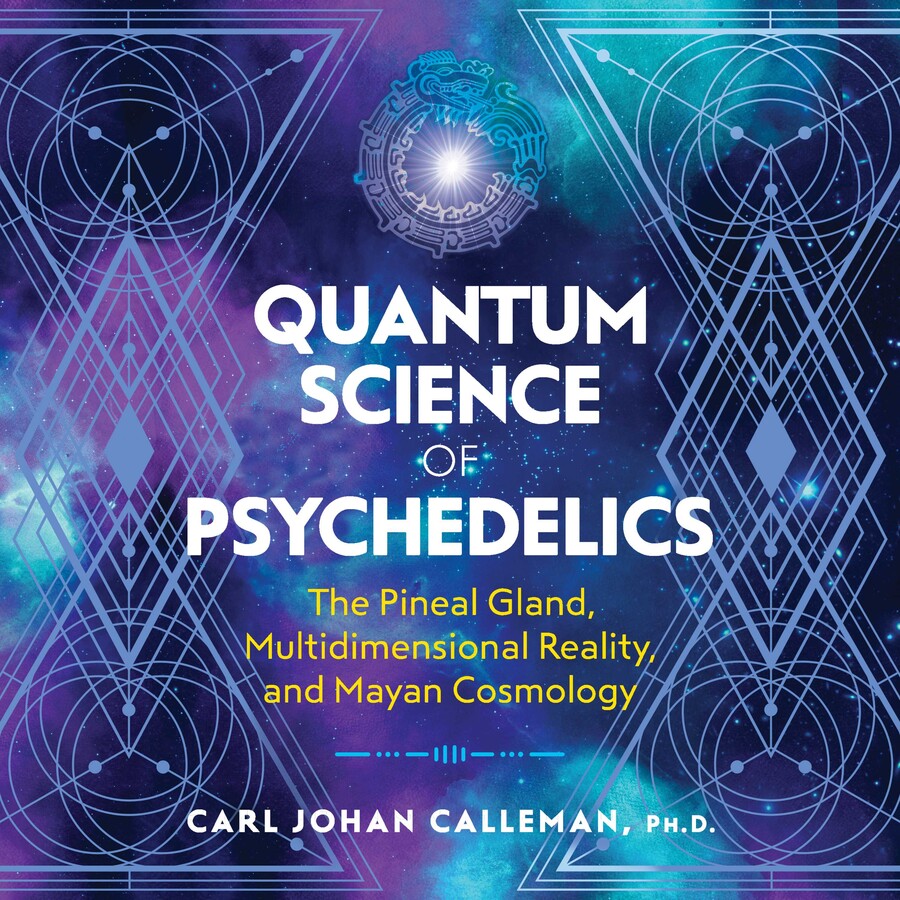 • Explains why altered states of consciousness exist, how they work, and why psychedelics have the effects that they do

• Describes how quantum waves, rather than the DNA molecule, have been the driving force behind biological and historical evolution

In this groundbreaking book, Carl Johan Calleman reveals the quantum science of the Maya, a science lost to the modern world that explains the phenomenology of psychedelics and altered states of consciousness. The ancient Maya had a sophisticated understanding of the multidimensional nature of reality and the forces that drive the evolution of consciousness. Calleman explains how quantum waves, illustrated by the Mayan Calendar, emanate from the center of the universe and activate new phases in the evolution of consciousness through holographic resonance, which alters the dualities of the human mind. For example, the 5th Wave, which dominated in Paleolithic times and evolved human consciousness above that of animals, brought a chaotic floating state reminiscent of the psychedelic or shamanic state, and the recent 8th Wave brought the digital revolution. The 9th Wave, which began in 2011, offers the potential for individual development of higher consciousness and healing if we can synchronize ourselves with its positive holograms.

This multidimensional perspective explains why altered states of consciousness exist and how they work. Calleman describes the role of the pineal gland for the human mind, how it controls our state of consciousness and how it can connect us to the cosmic Tree of Life. He shows that the mind is a “reducing valve” that normally limits our experience of cosmic consciousness but that this can be reversed through altered states. As Calleman concludes, psychedelics like ayahuasca and DMT not only give rise to extraordinary mystical and cosmic experiences and enable access to healing states, but they also are important for harmoniously synchronizing humanity with the 9th Wave to further the evolution of consciousness.

From Chapter 12: How Psychedelics Actually

Work The Pineal Gland--The Seat of the Soul

The starting point for the development of a new model for how the brain, mind, and spirit are connected is found within the pineal gland. This is a small, 5-8 mm long organ in the center of the brain with the shape and surface of a pinecone, and it is from the pinecone that it gets its name. It is located at the roof of the posterior third ventricle, directly above one of the crucial byways for the cerebrospinal fluid. It also lies in a very central position between the laterally positioned thalamic bodies and interacts with the pituitary gland. Moreover, medical dissections have revealed that its front section is equipped with a structure similar to the human eye and has a few quite unusual characteristics.

In ancient times it was thought that the pineal gland had an important role to play for communications with the Divine. As an example, on the murals in the palace of the Assyrian King Ashurnassirpal II, he is portrayed together with the Tree of Life (which it was one of the tasks of the King to tend for) and beings with wings (signifying that they were of divine origin), which presented him with pinecones. Looked upon in the appropriate context I think we can see a profound symbolism in this. Not only does this mural tell us that the pinecone (symbolic of the pineal gland) was associated with the Tree of Life, but it also tells us that the pinecones carried a message from the winged beings from the Divine. In support of such a view we should here consider the fact that the pineal gland is located on the midline of our bodies, which, as we have seen is a direct expression of the Tree of Life and is what, through resonance, creates the geometric compartmentalization of the left and right brain halves.

Further East, the pineal was seen as the biological correspondent to the Third Eye, located in the center of our foreheads. To Hindus and Buddhists in India the Third Eye is a symbol of enlightenment. They refer to it as “the eye of knowledge,” which is seen as the gateway to higher consciousness. The Greek Galen, often looked upon as the father of Western medicine, on his part believed that the pineal was a valve that regulated thought. In this we obviously have a connection to the previously discussed idea of a reducing valve with the potential to limit the range of our experiences. I believe that the pineal is at the center of a reducing valve--the geometric mind--and that it is from this that it gains its importance.

If we look to the time of the scientific revolution in Europe (initiated by the beginning of baktun 13 in the Mayan calendar), the pineal gland attracted the interest of the Frenchman René Descartes, who may be regarded as its foremost philosopher. In a text from 1636 he called the pineal the “seat of the soul,” a location where the body and mind meet, based on its unique feature of being an unpaired part of the human brain. I think he was right on this point as I believe that our experience of being an “I” relies on the fact that there exists a singular central point around which a coherent mind is created. Based on these traditional thoughts, I believe we should look at the pineal in a larger spiritual context in order to understand the role that it may have for the creation of altered states of consciousness. The pineal is, in other words, not just an isolated organ but gains its importance from its connection to the geometry that emanates from the Tree of Life and ultimately shapes the human mind.

It is not a secret that official modern science does not like the pineal gland. The Darwinist bias that the human body is created by random mutations leads modern science to downplay any hint of an underlying geometric structure that has created life. For the same reason, it places no importance on the fact that the pineal gland has a very central location in the human head. This dismissal is consistent with a view where evolution is driven by random material factors, but not with one where macrocosmic quantum waves bring certain geometries to life. In quantum science, geometry is what underlies all of evolution and so, based on this, it is not seen as an anomaly that the pineal gland plays a significant role.

Other than its location there are three features of the physiology of the pineal gland that I want to highlight here. The first is that its surface is covered by so-called cilia, which are organelles that can bring about the movements of cells or, as in this case, of a small organ. A second, relatively recent discovery is that cubic, hexagonal and cylindrical crystals of the mineral calcite are present inside the pineal. The scientists that studied these crystals by means of electron microscopy argued that these have piezoelectric properties and may serve as transducers. A transducer is a unit, usually used with electronic communications, which transforms information from one form to another. Electromagnetic waves in the microwave range can for instance be transduced into images on a TV screen.

From this observation we may draw the interesting conclusion that in a central position of our brains a transducer is located, the pineal gland. The questions then follow naturally: A transducer of what and where does the information being transduced come from? How does this connect to the Tree of Life as is implied in the Assyrian mural?
Carl Johan Calleman

“Carl Johan Calleman has produced nothing less than a potential Copernican Revolution across the sciences with his seventh book, Quantum Science of Psychedelics. Trained in chemistry, Carl has an encyclopedic grasp of the broad spectrum of the sciences. Building upon his previous research and books, he essentially is proposing to replace the flawed neo-Darwinian paradigm of random chance mutations with a much more purposeful transformation of bodies and minds, as well as culture, through the interference patterns of Mayan macrocosmic quantum waves. Rather than producing consciousness, the brain acts as a ‘reducing valve,’ downloading consciousness and allowing for resonance with various quantum waves. Carl Johan Calleman is not some mere armchair scholar but is a true participant-observer into the realms of which he writes. From his research into the significance of the Preferred Axis in Cosmology to the central role of the pineal gland, from his careful analysis of the Mayan calendar system to his participation in ayahuasca ceremonies, Carl must be credited with forging a path into a new (yet very old and forgotten) way of viewing, explaining, and predicting the world. You cannot read this book without expanding your mind!”

“Carl Calleman’s Quantum Science of Psychedelics is his magnum opus. He integrates macrocosmic quantum science with human brain functioning in the pineal gland to reveal a direct route to the organizing principle of the universe, the Tree of Life. He shows how psychedelics are a doorway into all nine dimensions that synchronize us with the highest states of consciousness. Calleman’s entirely new theory of evolution based on macrocosmic quantum science has profound implications for our understanding of altered states. His book is a must-read for students of the Mayan calendar and the quantum and for anyone seeking healing and advanced awareness.”

“Calleman challenges conventional scientific thinking about the roles of psychedelics, shamanism, the ego, and rationality in the evolution of human consciousness, offering external mechanisms in the waves of creation described by the Mayan calendar and the sequential buildup of cosmic quantum states. The Mayan waves of creation and the cycles they produce offer a new paradigm that helps us better understand the determinants of past evolution, our present condition, and the factors that structure our relationship to the universe.”

– Michael Winkelman, Ph.D., author of Shamanism: A Biopsychosocial Paradigm of Consciousness and Heali

“Carl Johan Calleman is a brilliant and provocative visionary whose books point to the potentials for our future. His new book, Quantum Science of Psychedelics, provides insight as to how the Ninth Wave is calling to us. He details ways to access and participate in the manifestation of humanity’s future. It’s an important book to read in these turbulent times. We need to know how we can participate in the positive future for us all.”

“Every so often a book is published that produces a fundamental reassessment and reordering of the conventional archaeological paradigm. This new--and vastly important--study by Mayan scholar Carl Johan Calleman is such a book. Combining a wide-ranging exploration of such fascinating subjects as archaeoastronomy, prehistoric mythology, and epigraphy, this book should be on the reading list of anyone interested in the antiquity and fate of human civilization.”

"Dr. Calleman takes his readers on a very unique journey to recover forgotten clues and insights from the ancient shamanic visionary and psychedelic world (as envisioned through substances such as ayahuasca and DMT), explaining how an evolution of consciousness is still unfolding and gradually making itself known in our modern world of quantum science."