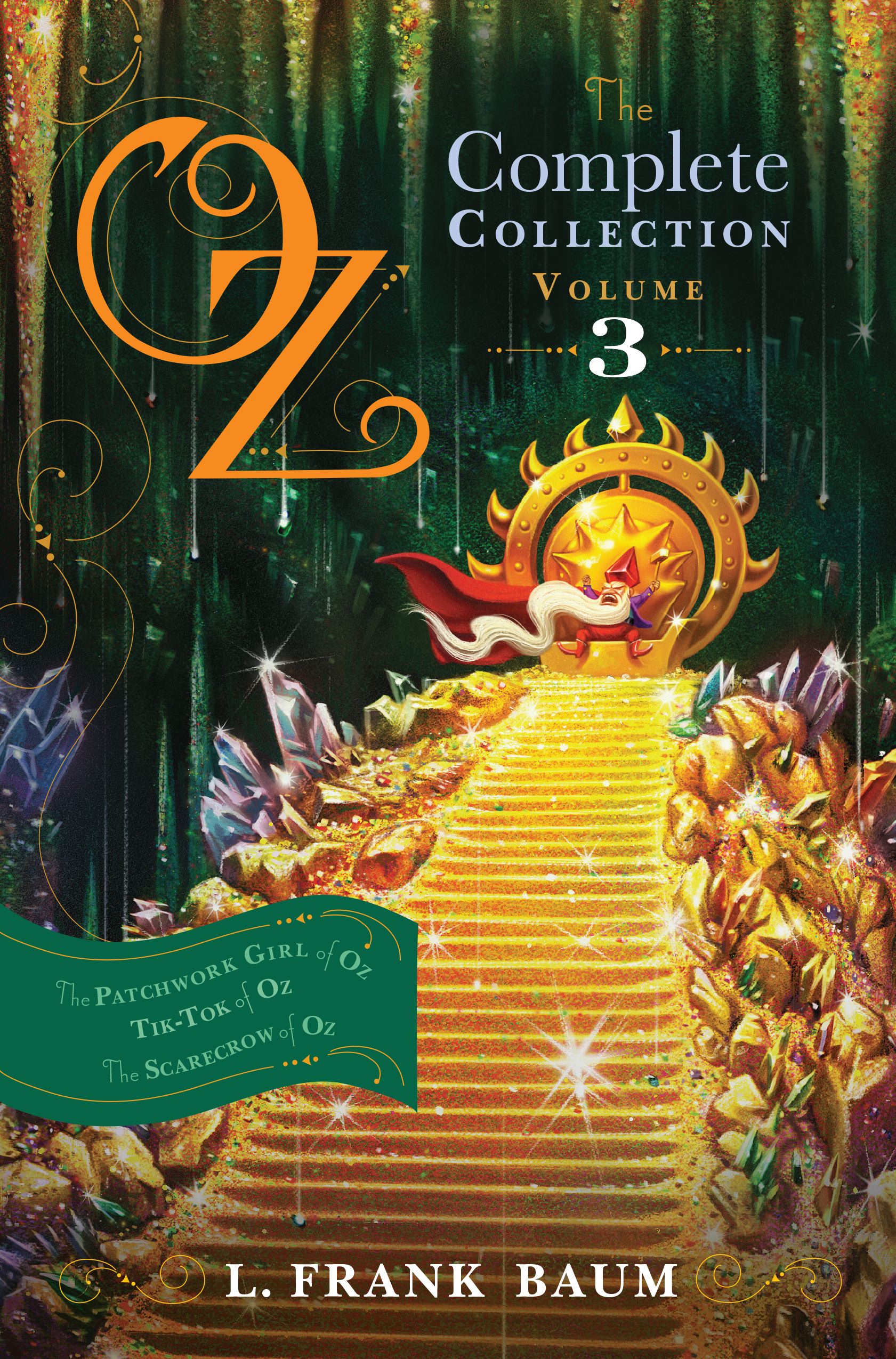 The Patchwork Girl of Oz; Tik-Tok of Oz; The Scarecrow of Oz

Explore the wonder of Oz in this collection of books seven through nine in L. Frank Baum’s classic American fairy tale series.

The seventh, eighth, and ninth titles of the iconic Oz series, now in one collection!

In The Patchwork Girl of Oz, the Munchkins Unc Nunkie and Ojo the Unlucky call on the Crooked Magician, who introduces them to his latest creation: a living girl made out of patchwork quilts and cotton stuffing. But when an accident leaves beloved Unc Nunkie a motionless statue, it is up to Ojo to save him. Can the mighty Wizard of Oz help?

In Tik-Tok of Oz, Betsy Bobbin and her loyal mule, Hank, wash up on the shores of an unknown fairyland during a storm. There they meet the clockwork man Tik-Tok and find themselves trapped in a battle with the king of the Nomes.

In The Scarecrow of Oz, Cap’n Bill and Trot journey to Oz and, with the help of the Scarecrow, overthrow the cruel King Krewl of Jinxland, who has been busy gathering an army for an invasion of Oz. Will they be able to stop the invasion?

Unc looked out of the window and stroked his long beard. Then he turned to the Munchkin boy and shook his head.

“Isn’t any butter? That’s too bad, Unc. Where’s the jam then?” inquired Ojo, standing on a stool so he could look through all the shelves of the cupboard. But Unc Nunkie shook his head again.

“All,” said Unc, again stroking his beard as he gazed from the window.

The little boy brought the stool and sat beside his uncle, munching the dry bread slowly and seeming in deep thought.

“Nothing grows in our yard but the bread tree,” he mused, “and there are only two more loaves on that tree; and they’re not ripe yet. Tell me, Unc; why are we so poor?”

The old Munchkin turned and looked at Ojo. He had kindly eyes, but he hadn’t smiled or laughed in so long that the boy had forgotten that Unc Nunkie could look any other way than solemn. And Unc never spoke any more words than he was obliged to, so his little nephew, who lived alone with him, had learned to understand a great deal from one word.

“Why are we so poor, Unc?” repeated the boy.

“Not,” said the old Munchkin.

“I know; but everyone in the Land of Oz has a place to live. What else, Unc?”

“I’m eating the last loaf that’s ripe. There; I’ve put aside your share, Unc. It’s on the table, so you can eat it when you get hungry. But when that is gone, what shall we eat, Unc?”

The old man shifted in his chair but merely shook his head.

“Of course,” said Ojo, who was obliged to talk because his uncle would not, “no one starves in the Land of Oz, either. There is plenty for everyone, you know; only, if it isn’t just where you happen to be, you must go where it is.”

The aged Munchkin wriggled again and stared at his small nephew as if disturbed by his argument.

“By to-morrow morning,” the boy went on, “we must go where there is something to eat, or we shall grow very hungry and become very unhappy.”

“Where shall we go? I don’t know, I’m sure,” replied Ojo. “But you must know, Unc. You must have traveled, in your time, because you’re so old. I don’t remember it, because ever since I could remember anything we’ve lived right here in this lonesome, round house, with a little garden back of it and the thick woods all around. All I’ve ever seen of the great Land of Oz, Unc dear, is the view of that mountain over at the south, where they say the Hammerheads live—who won’t let anybody go by them—and that mountain at the north, where they say nobody lives.”

“One,” declared Unc, correcting him.

“Oh, yes; one family lives there, I’ve heard. That’s the Crooked Magician, who is named Dr. Pipt, and his wife Margolotte. One year you told me about them; I think it took you a whole year, Unc, to say as much as I’ve just said about the Crooked Magician and his wife. They live high up on the mountain, and the good Munchkin Country, where the fruits and flowers grow, is just the other side. It’s funny you and I should live here all alone, in the middle of the forest, isn’t it?”

“Then let’s go away and visit the Munchkin Country and its jolly, good-natured people. I’d love to get a sight of something besides woods, Unc Nunkie.”

“Why, I’m not so little as I used to be,” answered the boy earnestly. “I think I can walk as far and as fast through the woods as you can, Unc. And now that nothing grows in our back yard that is good to eat, we must go where there is food.”

Unc Nunkie made no reply for a time. Then he shut down the window and turned his chair to face the room, for the sun was sinking behind the tree-tops and it was growing cool.

By and by Ojo lighted the fire and the logs blazed freely in the broad fireplace. The two sat in the firelight a long time—the old, white-bearded Munchkin and the little boy. Both were thinking. When it grew quite dark outside, Ojo said:

“Eat your bread, Unc, and then we will go to bed.”

But Unc Nunkie did not eat the bread; neither did he go directly to bed. Long after his little nephew was sound asleep in the corner of the room the old man sat by the fire, thinking.
L. Frank Baum

The Patchwork Girl of Oz; Tik-Tok of Oz; The Scarecrow of Oz