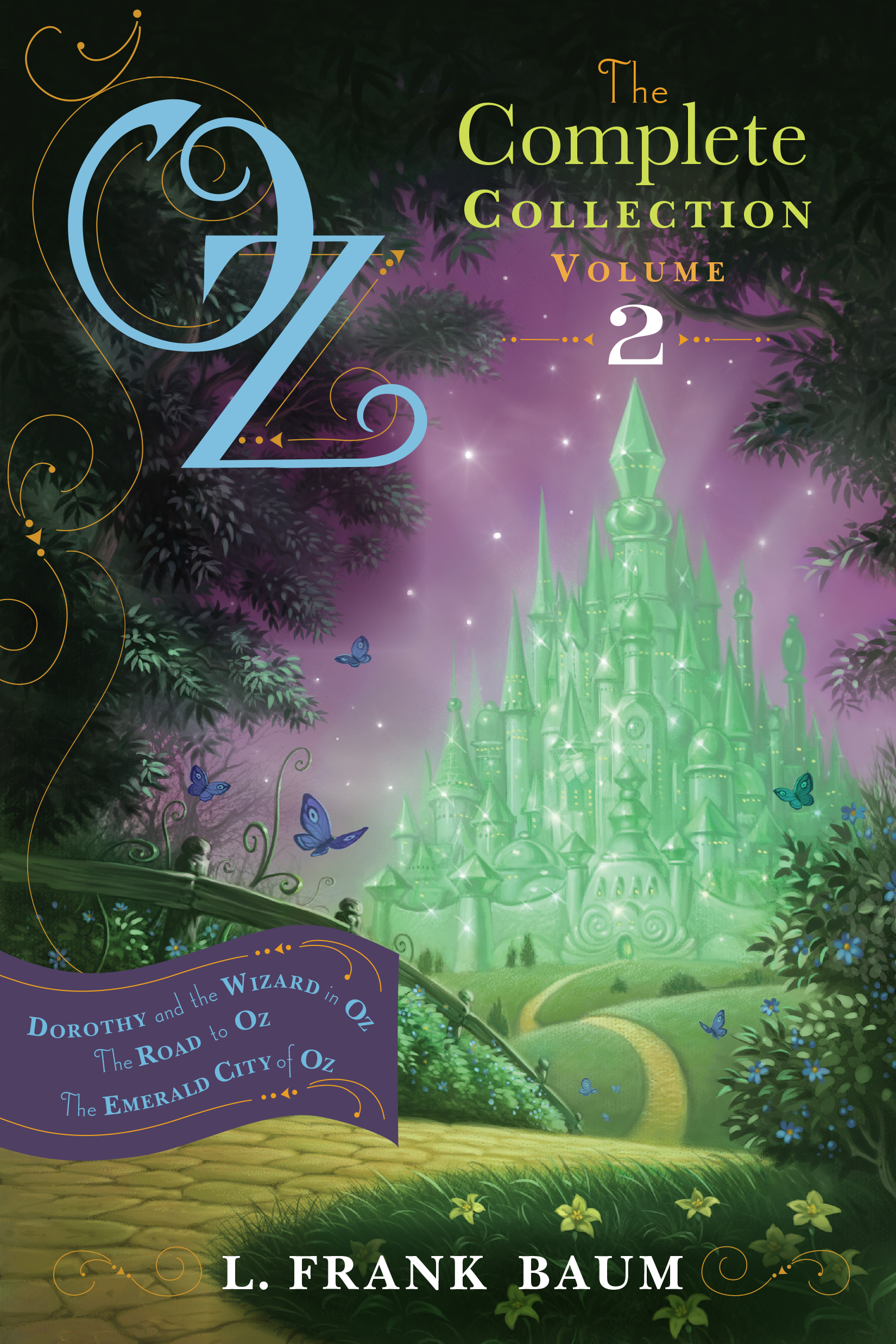 Dorothy and the Wizard in Oz; The Road to Oz; The Emerald City of Oz

Delve deeper into the world of Oz in this collection of books four through six in L. Frank Baum’s classic American fairy tale series.

The fourth, fifth, and sixth titles of the iconic Oz series, now in one collection!

In The Road to Oz, Dorothy sets out on another adventure with some new friends like the Shaggy Man, Button-Bright, and Polychrome, and some old ones like the Scarecrow and the Tin Woodman. Will they reach the Emerald City in time for Ozma’s birthday?

In The Emerald City of Oz, Dorothy, her Uncle Henry, and Aunt Em are going to live in the Emerald City. They set out of explore the land of Oz with the help of Dorothy’s friends, but must rush home again when they discover that the Nome King is busy gathering an army for an invasion of Oz. Will they be able to stop the invasion?

Oz, the Complete Collection, Volume 2 Chapter 1 The EARTHQUAKE
he train from ’Frisco was very late. It should have arrived at Hugson’s Siding at midnight, but it was already five o’clock and the grey dawn was breaking in the east when the little train slowly rumbled up to the open shed that served for the station-house. As it came to a stop the conductor called out in a loud voice:

At once a little girl rose from her seat and walked to the door of the car, carrying a wicker suit-case in one hand and a round bird-cage covered up with newspapers in the other, while a parasol was tucked under her arm. The conductor helped her off the car and then the engineer started his train again, so that it puffed and groaned and moved slowly away up the track. The reason he was so late was because all through the night there were times when the solid earth shook and trembled under him, and the engineer was afraid that at any moment the rails might spread apart and an accident happen to his passengers. So he moved the cars slowly and with caution.

The little girl stood still to watch until the train had disappeared around a curve; then she turned to see where she was.

The shed at Hugson’s Siding was bare save for an old wooden bench, and did not look very inviting. As she peered through the soft grey light not a house of any sort was visible near the station, nor was any person in sight; but after a while the child discovered a horse and buggy standing near a group of trees a short distance away. She walked toward it and found the horse tied to a tree and standing motionless, with its head hanging down almost to the ground. It was a big horse, tall and bony, with long legs and large knees and feet. She could count his ribs easily where they showed through the skin of his body, and his head was long and seemed altogether too big for him, as if it did not fit. His tail was short and scraggly, and his harness had been broken in many places and fastened together again with cords and bits of wire. The buggy seemed almost new, for it had a shiny top and side curtains. Getting around in front, so that she could look inside, the girl saw a boy curled up on the seat, fast asleep.

She set down the bird-cage and poked the boy with her parasol. Presently he woke up, rose to a sitting position and rubbed his eyes briskly.

“Yes,” she answered, looking gravely at his tousled hair and blinking grey eyes. “Have you come to take me to Hugson’s Ranch?”

He laughed at that, and his laugh was merry and frank. Jumping out of the buggy he put Dorothy’s suit-case under the seat and her bird-cage on the floor in front.

“Oh no; it’s just Eureka, my kitten. I thought that was the best way to carry her.”

“Eureka’s a funny name for a cat,” he remarked.

“I named my kitten that because I found it,” she explained. “Uncle Henry says ‘Eureka’ means ‘I have found it.’”

She climbed into the buggy and he followed her. Then the boy picked up the reins, shook them, and said “Gid-dap!”

The horse did not stir. Dorothy thought he just wiggled one of his drooping ears, but that was all.

“Perhaps,” said Dorothy, “if you untied him, he would go.”

The boy laughed cheerfully and jumped out.

“Guess I’m half asleep yet,” he said, untying the horse. “But Jim knows his business all right—don’t you, Jim?” patting the long nose of the animal.

Then he got into the buggy again and took the reins, and the horse at once backed away from the tree, turned slowly around, and began to trot down the sandy road which was just visible in the dim light.

“Thought that train would never come,” observed the boy. “I’ve waited at that station for five hours.”

“We had a lot of earthquakes,” said Dorothy. “Didn’t you feel the ground shake?”

“Yes; but we’re used to such things in California,” he replied. “They don’t scare us much.”

“The conductor said it was the worst quake he ever knew.”

“Did he? Then it must have happened while I was asleep,” he said thoughtfully.

“How is Uncle Henry?” she enquired, after a pause during which the horse continued to trot with long, regular strides.

“He’s pretty well. He and Uncle Hugson have been having a fine visit.”

“Is Mr. Hugson your uncle?” she asked.

“Yes. Uncle Bill Hugson married your Uncle Henry’s wife’s sister; so we must be second cousins,” said the boy, in an amused tone. “I work for Uncle Bill on his ranch, and he pays me six dollars a month and my board.”

“Isn’t that a great deal?” she asked, doubtfully.

“Why, it’s a great deal for Uncle Hugson, but not for me. I’m a splendid worker. I work as well as I sleep,” he added, with a laugh.

“What is your name?” said Dorothy, thinking she liked the boy’s manner and the cheery tone of his voice.

“Not a very pretty one,” he answered, as if a little ashamed. “My whole name is Zebediah; but folks just call me ‘Zeb.’ You’ve been to Australia, haven’t you?”

“Yes; with Uncle Henry,” she answered. “We got to San Francisco a week ago, and Uncle Henry went right on to Hugson’s Ranch for a visit while I stayed a few days in the city with some friends we had met.”

“How long will you be with us?” he asked.

“Only a day. Tomorrow Uncle Henry and I must start back for Kansas. We’ve been away for a long time, you know, and so we’re anxious to get home again.”

The boy flicked the big, boney horse with his whip and looked thoughtful. Then he started to say something to his little companion, but before he could speak the buggy began to sway dangerously from side to side and the earth seemed to rise up before them. Next minute there was a roar and a sharp crash, and at her side Dorothy saw the ground open in a wide crack and then come together again.

“Goodness!” she cried, grasping the iron rail of the seat. “What was that?”

“That was an awful big quake,” replied Zeb, with a white face. “It almost got us that time, Dorothy.”

The horse had stopped short, and stood firm as a rock. Zeb shook the reins and urged him to go, but Jim was stubborn. Then the boy cracked his whip and touched the animal’s flanks with it, and after a low moan of protest Jim stepped slowly along the road.

Neither the boy nor the girl spoke again for some minutes. There was a breath of danger in the very air, and every few moments the earth would shake violently. Jim’s ears were standing erect upon his head and every muscle of his big body was tense as he trotted toward home. He was not going very fast, but on his flanks specks of foam began to appear and at times he would tremble like a leaf.

The sky had grown darker again and the wind made queer sobbing sounds as it swept over the valley.

Suddenly there was a rending, tearing sound, and the earth split into another great crack just beneath the spot where the horse was standing. With a wild neigh of terror the animal fell bodily into the pit, drawing the buggy and its occupants after him.

Dorothy grabbed fast hold of the buggy top and the boy did the same. The sudden rush into space confused them so that they could not think.

Blackness engulfed them on every side, and in breathless silence they waited for the fall to end and crush them against jagged rocks or for the earth to close in on them again and bury them forever in its dreadful depths.

The horrible sensation of falling, the darkness and the terrifying noises, proved more than Dorothy could endure and for a few moments the little girl lost consciousness. Zeb, being a boy, did not faint, but he was badly frightened, and clung to the buggy seat with a tight grip, expecting every moment would be his last.
L. Frank Baum

Dorothy and the Wizard in Oz; The Road to Oz; The Emerald City of Oz