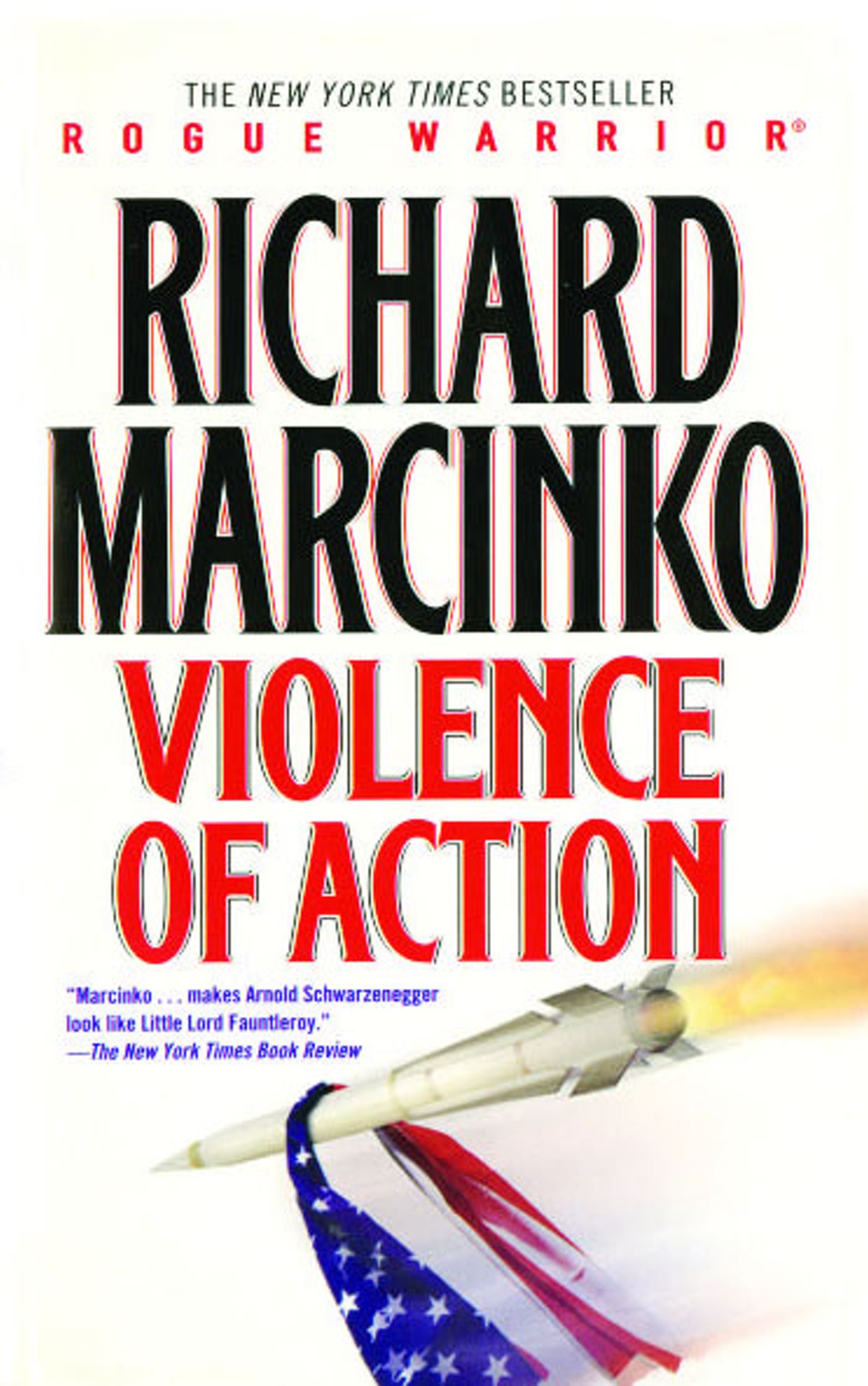 Bolder, brasher, and badder than ever before -- with an all-new team, the Rogue Warrior faces his ultimate challenge.
A suitcase nuke is on its way to a major American city, and there's only one man who can stop it. Back from self-imposed exile, during which he recommitted himself to the cause, and with a brand-new team of operatives straining at the leash, the Rogue Warrior has entered a whole new phase of his amazing career. The threat this time is from domestic terrorists intent on a holy war -- military insiders gone bad -- and what's worse, they possess suitcase-sized nuclear weapons. The city of Portland, Oregon, is under the ultimate threat, but what these dangerous terrorists will find, however, is a new and improved Rogue Warrior -- not only has age weathered him into the ultimate fighting machine, but he's also got an entirely new team together, a multicultural band of the toughest operatives available.
The ensuing chase to avoid nuclear annihilation is ripped-from-the-headlines stuff, and takes the Rogue Warrior to a new pitch, in which the very survival of his country is at stake. Can Demo Dick and his new band of Seals save the day, or is America heading for destruction? He's never had a harder task...is he up to it, or has the Rogue Warrior finally met his match?

"There are occasions when daring and risky operations, boldly executed, can pay great dividends."

The stranger slouched comfortably in the driver's seat of his rented black Lexus, a new Panasonic DVD player perched in his lap. Outside, a cool mist had descended over the deserted, tree-lined street. Raindrops pattered a soothing rhythm against the car's roof and windows. The small, yellow flames of the neighborhood's gas streetlamps flickered weakly against the gloom. Extraordinarily expensive, they'd been selected for their graceful lines, not their usefulness. Waiting patiently, the man welcomed the inclement weather like an old friend who'd showed up unexpectedly on his doorstep. In his business, bad weather was an ally.

He studied the DVD player's miniature screen as the image of Samuel Beckstein appeared in a clip from a recent evening news broadcast. Like a conquering hero, Beckstein was vigorously striding down the massive flight of stairs in front of a marble-columned courthouse, coming to a halt before a jackal-like mob of reporters. The camera zoomed in on the civil rights attorney's face as he pontificated about his latest legal victory. It had to be said, Beckstein was not a handsome man. His weary face was riddled with deep age lines and irregular patches of discolored skin, suggesting years of overexposure to the sun. A shock of longish, ill-kept, iron gray hair sprouted from his oblong skull. For an instant, his eyes, deeply set in cave-like sockets, seemed to stare directly at the man in the car. "You're a tired old fuck, aren't you?" the man whispered to himself. The electronic file played through a few other similar video clips and then ended.

He checked his watch, a simple Swiss Army officer's model on a stainless-steel band. It was time to move. He'd dressed appropriately for tonight's occasion in a lightweight black wool suit, a black turtleneck, and hand-sewn black leather lace-up shoes with rubber soles. His powerful hands were encased in a pair of thin, black leather shooting gloves. Soft and supple as a baby's skin. The overall effect suggested a stylish, modern-day grim reaper. Appropriate indeed.

His right front coat pocket held a tight fitting assault mask -- a black Nomex balaclava. The mask would conceal his most noticeable feature, a nasty scar running dead center across his forehead. The deep channel was the result of an unfortunate encounter with a Russian rocket-propelled grenade during the invasion of Panama.

He shut off the DVD player, set it on the seat beside him, then slipped an S&W Model 13 .357 Magnum revolver out of the sturdy leather shoulder holster beneath his left armpit. His hand-tailored suit coat concealed the weapon perfectly. The revolver's blued cylinder was loaded with six rounds, each a 158-grain soft lead, hollow base wadcutter seated backwards inside a shiny brass casing. He'd designed and tested the round himself. Upon contact with soft tissue or bone, it would reliably expand to roughly the size of a .70-caliber projectile. Satisfied his weapon was ready, he returned the revolver to its holster.

There was no one in sight on the street as he slid from the cozy warmth of the Lexus. He softly closed and locked its door behind him and began the half-block walk through the damp night air to Beckstein's home. Strolling casually along the wet sidewalk he keyed a pre-programmed number for the lawyer's private line into his cell phone. After several rings Beckstein answered.

"Ed!" exclaimed Beckstein. The lawyer's voice assumed its nationally famous courtroom drawl. "Wonderful of you to call. Yes, yes of course. You're close?"

Closer than you think, cocksucker, the advancing gunman thought to himself. "Yes, Samuel. Just around the corner. Home alone?"

"Yes," Beckstein replied. "My bodyguard is off tonight. Fucking some sweet little bitch barely over the legal age, or so I'm told."

The man in black smiled. "Some guys have all the fun. See you soon."

"I'll deactivate the security gate," said Beckstein. "Come straight up to the front door and I'll let you in."

"Shouldn't be but a minute." He didn't wait for a response, but punched the end button on the phone and slid it back into his jacket pocket.

Reaching the house's outer perimeter, he took out the ominous black hood and pulled it over his head in one practiced motion. A subtle adjustment here and there ensured a seamless fit. He pushed open the wrought iron security gate just wide enough to slip past it. He stopped, listening and watching for anything unexpected. The rain was falling harder now. Big, fat drops of icy-cold water hammered against the top of the executioner's hood and soaked into his powerful shoulders. Sensing nothing unusual, he swiftly mounted the short flight of steps leading up to a massive front door of lustrous, dark wood. As his research had indicated, the townhouse's exquisitely restored Federal facade hadn't been marred by anything as practical as an exterior security camera, or even a low-tech peephole in the door. Why bother to employ some musclebound bodyguard if you couldn't take the most basic precautions yourself, he wondered? The asshole deserved whatever he got.

He eased the big Magnum revolver free of its holster and rapped its heavy, 3" barrel against the door. Moments later he heard the deadlock turning from the inside. His every muscle prepared to strike.

As soon as he felt the door opening his whole body sprang forward hard. His left hand violently pushed the door aside as he exploded into the foyer. The astonished Beckstein stumbled backwards as the inside doorknob flew from his grasp and the masked intruder exploded into his home.

The man smashed the butt of the revolver into Beckstein's face, crushing his nose and producing a spray of broken cartilage and rich red blood. As the lawyer's hands instinctively flew upward to protect his now ruined nose, the gunman raised his revolver level with Beckstein's gleaming forehead and pulled its custom-tuned trigger. No explanation, no hesitation.

Beckstein's face caved in as the lead wadcutter burrowed its way through his forehead and into his cranium. The soft, wide mouth of the bullet began expanding upon contact and reached an impressive .72-caliber in diameter by the time it ruptured the attorney's brain. It proceeded to punch a massive chunk of bone out of the back of his skull. Sloppy, pinkish-red gobs of pulped brain matter were sucked through the jagged hole as the lead chunk exited, landing with a satisfying splatter on the foyer's walls and floor.

Beckstein never knew what -- or who -- hit him.

Keeping the Magnum on target, the killer watched as Beckstein's body slumped to the floor. Then he straddled the fallen figure and fired a second bullet directly into the oozing mass of Beckstein's face. "If you were ugly in life," he whispered, "you're a beautiful motherfucker in death!" Dropping all of his weight onto one knee, he delivered a massive crunch to the center of Beckstein's chest. The sternum-shattering blow released a harsh spray of foamy red bubbles from the man's unmoving lips. Holstering the revolver, the killer slipped a microcassette tape from his front pants pocket and placed it next to the dead man's shattered skull.

As he rose, the hollow chime of an antique wall clock began to toll midnight. He stepped over the dead attorney like he was stepping over a piece of rotten meat and silently padded through the foyer to a large, lavishly decorated reception room. Moving swiftly across the room's glistening parquet floors and museum-quality Oriental rugs, he made his way to a side door that opened directly into a corner of the back garden. Slipping past a jumble of patio furniture, he located the rear gate exactly where he'd been told it would be, obscured behind a thick cascade of slippery green ivy. Once through the gate, he was in a long, narrow alleyway that allowed service people discreet access to the grand houses that lined these blocks. He slipped down the dimly lit alley keeping to the shadows, avoiding the garbage cans neatly stacked behind each house he passed. His pace was cautious but even. As he moved steadily away from the night's killing ground he scanned his flanks and rear for anyone foolish or unlucky enough to follow him, but he was all alone.

At the end of the long alley, he found the tan Mazda coupe that had been left for him earlier. Before opening the door and slipping into the car he checked its backseat. More than one sorry asshole had found himself mugged by an unexpected visitor with a Slim Jim and sharp knife. Satisfied, he belted himself into the driver's seat and started the car. He fished the cell phone out of his pocket and punched a speed dial button. After three rings, his call was answered by a clipped New England accent.

"Of course," replied the voice. "He'll be pleased." The line went dead.

Thirty minutes later, the man in black arrived back at his downtown hotel. Going directly to the luxury suite he'd rented the day before under a false name, he called room service and ordered a Caesar salad and a porterhouse steak, bloody rare. Sipping a glass of excellent cabernet, he stepped out onto the room's private balcony and took in the breathtaking view of the city's monuments spread out before him. Once upon a time, the gleaming structures had actually inspired awe in him, but now he could see them only as monuments to a terrible vanity. Vanity of vanities, all is vanity. Raising his glass, he silently congratulated his men for the night's success. They'd done well. It had been, as always, a team effort. Samuel Beckstein's assassination would be the means of delivering their message to the president of the United States and then to the world.

The doomsday clock had begun its countdown.