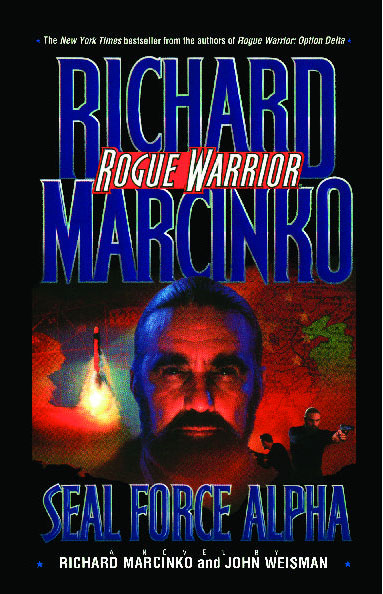 AS A US NAVY SEAL, RICHARD MARCINKO KNEW NO LIMITS—AS THE ROGUE WARRIOR, HE OBEYS NO RULES!

The Rogue Warrior's taking a flying leap—a high-altitude jump over the South China Sea. His mission: scuttle a Chinese freighter's cargo of nuclear hardware and its crack crew of naval commandos. It's a leave-no-tracks, take-no-prisoners operation—in short, business as usual. But on board Marcinko makes a chilling discovery: a cache of state-of-the-art command and control equipment, all made in the USA—and primed for America's destruction!
Marcinko takes his findings back to Washington, where he runs into a wall of doublespeak and double deals. But not everyone wants to see America go down the drain. General Tom Crocker, chairman of the Joint Chiefs of Staff, unleashes the SEALs of war—Marcinko and a Pentagon-based unit, SEAL Force Alpha—to neutralize a global maze of political deceit that begins all too close to home.

The Chinese sense victory. They have a mole in the White House, and five thousand years of military strategy on their side. But neither the traitor nor all the wisdom of Sun Tzu are prepared for Marcinko and his men. They, after all, live by the Rogue Warrior's Tenth Commandment of SpecWar: "There Are No Rules—Thou Shalt Win At All Cost."

Back to the business at hand. After all, there was work to be done -- to wit, I had to guide us to the second phase of the mission and set us down ten nautical miles due south of our target. I pressed the switch on the Magellan GPS unitthat sat next to the altimeter on my chest pack. The screen illuminated, but I saw no information. No distance to target. No beading. No latitude. No longitude. No nothing.
WTF. I pressed the on/off switch again. And again, the display came up blank.
Let me pause here for just a few seconds to explain the kind of unkosher pickle I was in.
Looking for a single ship in the South China Sea can be a problem if: if you are coming from the air, if it is night; if the ship does not want to be found; and if you do not know where the fuck you are relative to the target. Am I making things plain enough for you?
Yes, I had a compass. I could steer north, south, east, and west. I had an altimeter. I knew how high I was. But without the Magellan, which gets its signals from a GPS, or Global Positioning Satellite, I had no way of knowing where I was in relation to the target. I had no course to follow. No glide path to glide along.
My men had Magellans. But I couldn't use their units to help me because we had no way of making contact. Sure I was carrying a radio -- but it and all its gear was stowed securely in my chest pack, and there was no way to use it. More to the point, even if I pulled it out and set it up, my guys' radios were in their chest packs.
Now, both you and I know that the Magellan was working just fine not ten minutes ago. But that was then and this was now and I was being screwed with by Mr. Murphy more than I wanted to be.
Okay. Let us be logical here. The batteries were working. That I knew because the screen lit up. But the antenna obviously wasn't working. Why wasn't it working? I stared at it and tried to be logical. And in staring, I had an epiphany. Y'know, as my old shipmate Doc Tremblay has told me more than once, sometimes I do have fartbeans for brains. The goddamn thing wasn't working because I'd forgotten to plug the antenna, which was located in my helmet, into the unit.
I reached inside my flight suit, brought the connector wire out, plugged it securely into the Magellan's base, and turned the power on once again. Bingo. Full display. Now, perhaps, it was time to sit back and enjoy the ride.