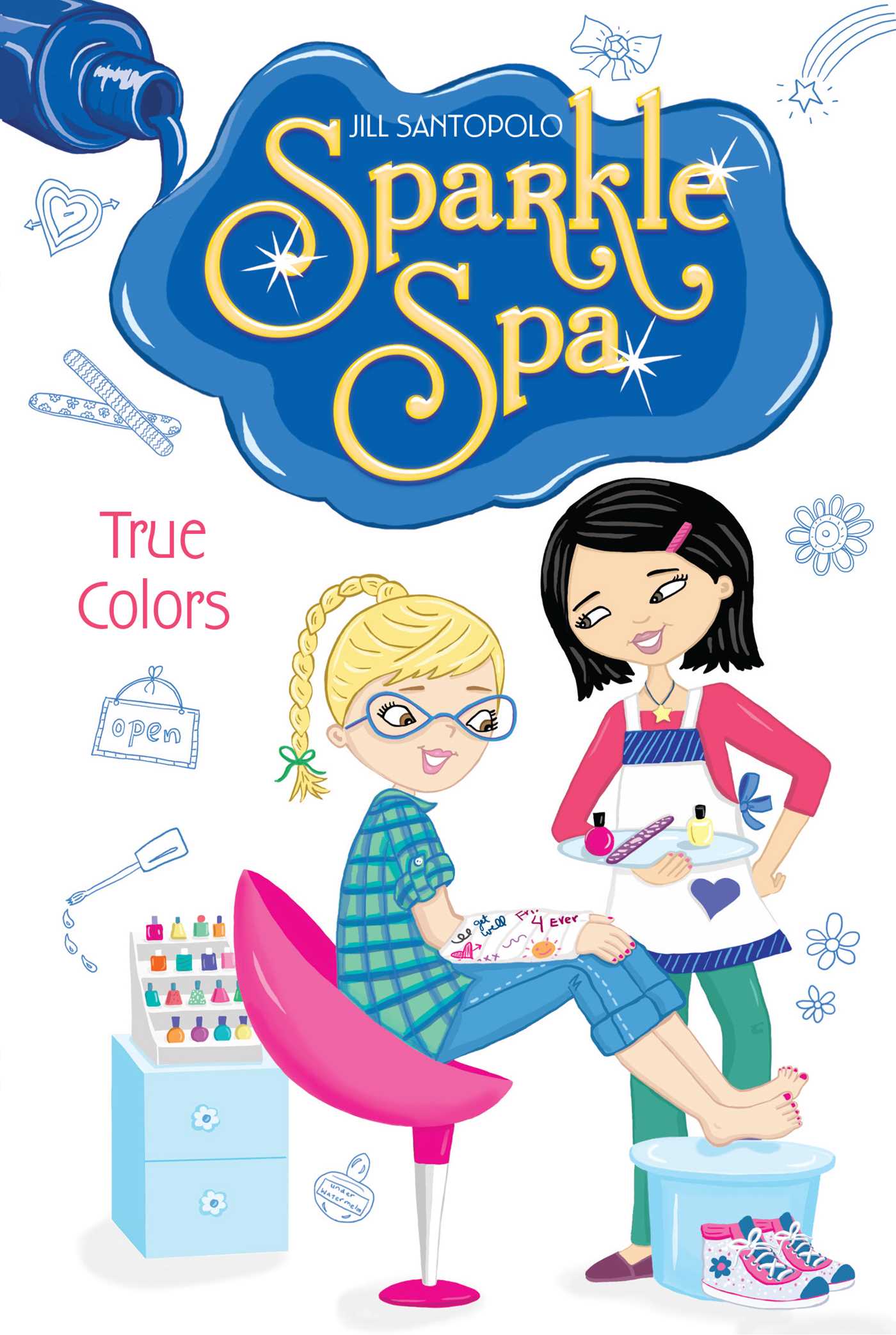 The Sparkle Spa salon has never been busier—which is why it’s a big problem when a broken arm puts Brooke out of commission!

When Brooke breaks her arm, it’s disastrous timing for the Sparkle Spa. The Auden Angels soccer team needs Rainbow Sparkles pedicures for good luck in the quarter finals. The girls in the Fall Dance recital are counting on the Sparkle Spa to make them look awesome. And Brooke can’t possibly do manis and pedis with one hand! Aly needs help—and she needs it fast. So when Brooke’s best friend Sophie proves she’s a super fantastic manicurist, Aly hires her. But when Brooke finds out what her sister’s been up to behind her back, can she see reason instead of red?

one Not-So-Mellow Yellow
Give that back!” Brooke Tanner yelled as she chased her puppy around the living room couch and underneath the leaves of a rubber plant. “Sparkly, I mean it!”

But Sparkly didn’t listen. With Brooke’s glittery Not-So-Mellow Yellow—colored hair band hanging out of his tiny mouth, the puppy raced up the steps and then back down. Brooke was at his heels.

“Maybe if you stopped chasing him, he’d stop running!” Aly Tanner called from the kitchen. It was early Tuesday morning, and Aly was preparing two bowls of cereal for breakfast: a purple bowl for herself, and a pink one for her younger sister, Brooke. Both bowls had granola inside. And blueberries.

“But I want my hair band!” Brooke shouted back to her sister.

“Like I said, if you want it back, just stop running!” Aly yelled into the living room.

“But what if he eats it when I stop?” Brooke sped into the kitchen after Sparkly, who leapt over the girls’ backpacks. Brooke leapt over them too, but her sneaker caught in her backpack strap and—bam!—she crashed to the ground.

Aly went running over. For a minute she wondered if Brooke was fine and just being dramatic, which was the case with Brooke a lot of the time. But tears were running down Brooke’s cheeks, and she was holding her arm against her stomach.

Now it was Aly’s turn to race through the house, ducking under the leaves of the rubber plant, flying around furniture and then up the stairs until she got to their parents’ bathroom.

“Brooke fell! She thinks her arm is broken!” Aly pounded on the door, yelling over the sound of a hair dryer.

“What did you say, sweetie?” the girls’ mom asked as she cracked open the door.

Aly repeated herself, and then Mom took off, racing down the steps two at a time, Aly right behind her. When they reached the kitchen, Brooke was right where Aly had left her, still on the floor, still crying. Sparkly was whining and nudging Brooke’s hair band toward her.

“That won’t help anymore, Sparkly!” Brooke whimpered through her tears.

Mom bent down, asked Brooke a few questions, touched her arm in a few spots—which made Brooke yell even louder—and then said to Aly, “I have to take your sister to the hospital. Please call Joan and tell her what happened. She’ll have to take you to school today.”

As much as Aly liked spending time with Joan—who was the girls’ favorite manicurist at their mom’s salon, True Colors—she didn’t like this plan at all. What if something was really wrong with Brooke? What if Brooke needed her? Aly couldn’t go to school. She had to be there for Brooke. The sisters were a team.

“Can’t I come with you and Brooke?” she asked. “To make her feel better?”

Mom shook her head. “Sorry, Aly,” she said. “I don’t know what’s going to happen at the hospital or how long it’ll take. You can go straight to the salon after school. Either I’ll be there or Joan will fill you in. You have her number, right?”

Aly nodded. “It’s on the refrigerator, just like it always is.”

Brooke wasn’t crying as hard now, which made Aly feel a little bit better about leaving her. But not all better about it.

Mom ran her hand through her hair, which she hadn’t finished drying, and twisted it into a messy bun. “It’s times like these that I wish your father didn’t travel all week long.”

“Do you think he’ll come home early?” Brooke asked, sniffling, as Mom carefully helped her up off the floor.

“Let’s call him from the car,” Mom said.

Once Mom pulled the door shut behind her, Aly called Joan. And when she started explaining what happened, she found herself crying a little.

“I bet that was scary,” Joan said.

“It was,” Aly said, crying a little more now. “And what if Brooke’s really hurt?”

“If Brooke’s hurt, the doctors will make her better,” Joan said. “Now sit tight, and I’ll be right there to take you to school. Get Sparkly’s leash on too, so I can bring him to the salon.”

All day long Aly worried about Brooke. She had trouble paying attention in class. She kept looking at her purple polka-dot watch to see if it was 3:07 yet, the end of the school day, when she could go to True Colors and find out if her sister was okay. But every time she checked, it wasn’t even close to 3:07. Time was moving slower than the snail that Aly and Brooke had watched crawl across the sidewalk the weekend before.

At lunchtime Aly sat with her two best friends, Charlotte and Lily, as usual, but she was too distracted to concentrate on their conversation about the Lewis and Clark project that was due next Monday. She sat, barely touching her bagel and cream cheese, barely even drinking her orange juice, until Lily asked if there were any open appointments left at Sparkle Spa that afternoon.

Aly clapped a hand over her mouth. “Oh no!” she said. “You’re right. It’s Tuesday! And Brooke won’t be there! And the whole soccer team is coming! And they’re going to be in the quarterfinals this weekend! This is going to be a disaster.”

Sparkle Spa was a business that Aly and Brooke started in the back room of their mom’s nail salon. Kids could have their nails and toes polished and not take up time or space in the busy grown-up salon. Plus, it was more fun when it was just kids. They could pretty much do whatever they wanted, and as long as they were quiet, no one really bothered them.

It was because of the soccer team—the Auden Angels—that the spa had started in the first place. Their captain, Jenica Posner, came to True Colors one day, and Aly—not an actual salon manicurist—wound up giving Jenica a rainbow sparkle pedicure. Brooke had come up with the color combination, and Jenica thought it was really cool.

Jenica scored so many goals in the next soccer game that the whole team wanted rainbow sparkle pedicures too. And they still came every week so that their “sparkle power” wouldn’t fade. So far, they were undefeated for the season and had made it all the way to the quarterfinals.

The team insisted it was due to the sparkles. Aly was pretty sure it was because they were awesome soccer players, but she couldn’t risk not giving them sparkle power before the quarterfinals, just in case. Even with Brooke gone, Aly would have to do the Angels’ pedicures this afternoon. She didn’t want it to be her fault if they lost this week. But how would she give all those sparkle pedicures without Brooke’s help?

Maybe if I make a list, I can figure it out, Aly thought.

Making lists was something Aly did to organize her thoughts and help her solve problems.

She took a sheet of paper from her notebook and began writing.

Ways to Make Sure All the Angels Get Their Sparkle Power

1. Walk to True Colors as fast as possible.

2. Ask Jenica if some players can come on other days.

Aly stopped writing and looked up at Charlotte and Lily.

“I know this is a ridiculous question, but is there any chance either one of you learned how to polish nails over the weekend?” Aly asked her friends.

“But we can help with other things!” Charlotte offered.

“Absolutely,” Lily agreed. “We’ll both come with you after school.”

“I guess that’s better than nothing,” Aly said, taking a bite of her bagel, even though she was feeling kind of sick to her stomach. “Thanks.”

She started to think of a fourth item for her list when she heard, “Is it really, really true that Brooke broke her arm?”

Aly turned. It was Brooke’s best friend, Sophie, who had just come in from recess. Her face was flushed, and her dark bangs stuck to her forehead.

“Hi, Soph. I won’t know about Brooke until later. Do you want to come with us to Sparkle Spa after school and find out?”

“Please, can I?” Sophie begged. “I’ll call my mom from there, if that’s all right.” She looked as anxious as Aly felt.

“You can help with the soccer team’s pedicures, if you want,” Charlotte added. “Even if you can’t polish.”

Sophie’s eyes lit up. “I’d be happy to. Anything for Brooke. And for the Sparkle Spa.”

The bell rang for class, and as the girls walked together down the hall, Aly thought, Well, that’s three helpers. But not even three people will equal one Brooke.

Jill Santopolo, a children’s book editor, grew up in Hewlett, New York. She graduated from Columbia University and received a MFA from Vermont College. She is the author of two middle grade mysteries as well as the Sparkle Spa series and lives in New York City. You can visit her online at JillSantopolo.com.