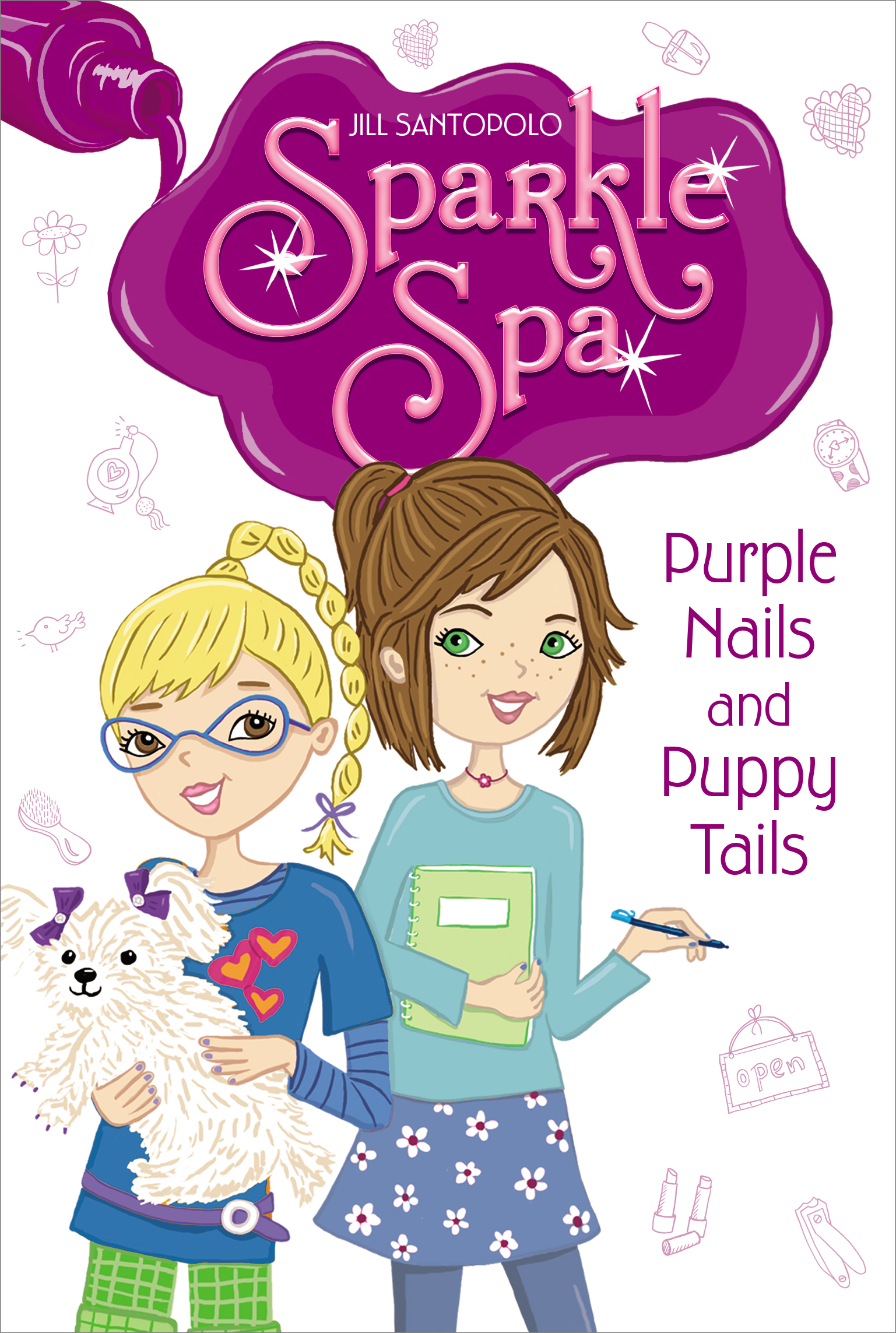 When Aly and Brooke decide to give PET-icures to puppies, it seems like their new Sparkle Spa salon might just go to the dogs!

At Aly and Brooke’s new nail salon, anything goes. Well, almost anything. One of their mother’s regular clients doesn’t go anywhere without her beloved dog Sadie, who’s a canine star. One paw leads to another, and the girls not only polish Sadie’s nails, but also hatch a scheme to do doggy makeovers for the Annual Pup Adoption Day at the local shelter. But dogs aren’t exactly ideal mani-pedi customers, are they? The girls are finding out the ruff way!

“What do you think?” she asked. “Should Shake It Up Silver be our Color of the Week?”

It was a new idea Aly had—picking a Color of the Week so that everyone who came to the Sparkle Spa would get to know all the nail polish choices one by one.

Aly’s younger sister, Brooke, put down the nail file she was using for her best friend Sophie Chu’s pedicure. “I need to take a break, Sophie,” she said. “Just for a second. This is Very Important Polish Business.” Brooke walked over to look at Charlotte’s nails.

“Oooh, it’s so shiny! I love it, Aly,” Brooke said. “Maybe we’ll get to paint everyone’s nails with silver glitter.”

“Silver glitter? Let me see,” Jenica Posner called from the sitting area. Jenica was the captain of the Auden Elementary girls’ soccer team. She already had a special rainbow sparkle soccer team pedicure, which Aly had done three days ago.

Aly topped Charlotte’s nails with clear polish to seal in the sparkles and sent her over to the waiting area to dry—and to show Jenica the color.

“Can you give me a quick manicure too, Aly?” Jenica asked after seeing Charlotte’s nails. “Before my nana’s done out there?”

Aly smiled to herself. She couldn’t believe that Jenica Posner, the most popular sixth grader in their school, was begging her for a manicure.

Just a few weeks ago Aly and Brooke had given Jenica a rainbow sparkle pedicure, which was how the Sparkle Spa began in the first place. In her next soccer game Jenica scored five goals, and then the rest of the team wanted matching pedicures for good luck. It was pretty unbelievable, but ever since they started getting rainbow pedicures, the team hadn’t lost one game. Now Jenica liked to visit and would stop in whenever her grandmother came to True Colors to get her nails done.

The Sparkle Spa was really just a back room of Aly and Brooke’s mom’s nail salon. The sisters had opened it and decorated it with paintings and rainbow-colored pillows to sit on. There were some old pedicure chairs and manicure stations for them to use. And the best part was that their mom let them polish kids’ nails there three days a week—two days after school and one day on the weekend.

Aly opened the door and looked into the True Colors salon, where all the grown-ups were having their nails done. It was Friday afternoon, always a busy time.

Joan—Aly and Brooke’s favorite True Colors manicurist—was taking polish off Jenica’s nana’s nails. Aly figured she could do a manicure almost as fast as Joan could, so the timing might work out perfectly. She waved to Mrs. Franklin, a True Colors regular who had a tiny dog named Sadie that she sometimes brought to the salon with her. Sadie was sitting on Mrs. Franklin’s lap, so Aly waved to her, too. Then she slipped back into the Sparkle Spa.

As Aly started on Jenica and Brooke finished up Sophie, Lily Myers walked in the door. Lily was Aly’s best school friend, along with Charlotte.

“Hey, guys,” Lily said as she climbed into the second pedicure chair, next to Sophie. “Can someone do my toes?”

Brooke looked at Aly with a Secret Sister Eye Message that involved scrunched-up eyebrows. It meant: Our friends need to start making appointments! But she leaned over anyway and turned on the water in a pedicure basin for Lily.

“I’m almost done with Sophie. Then it’s your turn,” Brooke said. “Did you pick a color? If not, I think you might like Shake It Up Silver. It’s on Charlotte’s nails if you want to see. It’s our Color of the Week.”

It seemed like Brooke never stopped chattering. She could paint nails and talk, run water and talk, chew gum and talk—Aly was surprised she didn’t talk in her sleep.

“Color of the Week?” Lily popped out of the pedicure chair to check out Charlotte’s nails. But before she could take even one step, a barking and yapping ball of fur came racing through the door and ran right into Lily’s legs.

Lily jumped up and toppled into the almost-full pedicure basin. The water splashed all over Brooke. And the yapping ball of fur—which was actually Mrs. Franklin’s dog, Sadie—kept barking and running around the Sparkle Spa.

Jenica hopped up from the manicure chair to chase Sadie, waving her wet Shake It Up Silver nails. “Stop! Sit! Stay! Down! Heel!” she yelled.

“Help!” Lily shouted. She was stuck, sitting in the pedicure basin, her knees folded up to her chest.

But Sadie wasn’t paying attention to either girl. She darted by Aly’s feet. Aly dove after her, but the dog got away. Then Sadie headed to the jewelry area and—bam!—knocked over an open box of beads.

Charlotte tried to grab Sadie with her elbows so she wouldn’t mess up her manicure, but Sadie was faster and raced toward the table with the Sparkle Spa donation jar on it.

Brooke wiped her wet glasses on a dry part of her shirt and scooted across the room, catching the big teal, strawberry-shaped jar just before it fell.

Sophie swung her legs back and forth, yelling, “Get her! Get her!”

Aly cornered Sadie between the mini-fridge and a stack of nail polish boxes, bent down, and swooped the panting dog into her arms.

Sadie squirmed and squiggled, but Aly wouldn’t let her go. She tried to calm the dog by stroking her head, but Sadie just yapped and yipped and started whimpering.

Mrs. Franklin burst into the Sparkle Spa, with Jamie, the manicurist who usually did Mrs. Franklin’s nails, behind her.

Aly looked around. The place was a mess!

Pedicure water was everywhere. Bottles of Key Lime Pie, Reddy or Not, and Go for the Gold were all over the floor. Lily was still stuck in the pedicure basin, and multicolored beads were rolling across the carpet from the jewelry-making area.

“I don’t know what got into her,” Mrs. Franklin said, hurrying over to Aly to take the shaking Sadie from her. “A truck horn blared on Main Street, and she took off like a shot.”

While Mrs. Franklin soothed Sadie, Jamie pulled Lily out of the pedicure basin. Brooke handed her a few washcloths from a pile she had grabbed to help dry her off.

“I think I need some new clothes,” Lily said, trying to blot her shorts dry.

“I have an extra pair of soccer shorts in my duffel,” Jenica volunteered, and went over to the couch to get her bag.

“Sadie girl,” Mrs. Franklin said, shaking her head at the dog. “Just look at you! What are we going to do now?”

“She’ll dry pretty soon,” Brooke said. “Or do you want some washcloths? They’re kind of small, but they’re probably about the right size for Sadie.”

Mrs. Franklin shook her head again. “It’s not that,” she said. “Sadie was just groomed this morning. She has a dog-modeling job tomorrow at three o’clock. She’s the new spokes-dog for the shelter on Taft Street, Paws for Love. They’re planning to photograph her for a poster to promote pet adoption. And she’s a mess! I’m even going to have to clean her toenails.”

Sadie was finally quiet, happy to be in Mrs. Franklin’s arms. It was funny how they kind of looked alike. They both had fluffy hair that was mostly white, and Sadie’s red collar matched the red sweater Mrs. Franklin had draped over her shoulders.

“Hey, that’s the shelter I volunteer at,” Jenica said, still rifling through her duffel bag for shorts. “I didn’t realize Sadie was the dog that was going to be on the Adoption Day posters.”

“Mrs. Franklin? Are dog toenails like people toenails?” Brooke asked. She dropped the wet towels she was holding into the basin and walked over to inspect Sadie. Aly followed her. She’d never really looked closely at a dog’s toenails before either.

Mrs. Franklin held up Sadie’s paw. “Here they are,” she said. “Different from ours.”

Brooke took Sadie’s paw in her hand. And then she looked at Aly. She was wearing a face that said: I have an idea!

Aly got it, and she giggled for a second too. But then she stopped. She wasn’t sure this was the best idea Brooke had ever had. Brooke had lots of ideas all the time. Some were really good, like the name Sparkle Spa. But a puppy pedicure? That sounded like trouble.

Jill Santopolo, a children’s book editor, grew up in Hewlett, New York. She graduated from Columbia University and received a MFA from Vermont College. She is the author of two middle grade mysteries as well as the Sparkle Spa series and lives in New York City. You can visit her online at JillSantopolo.com.