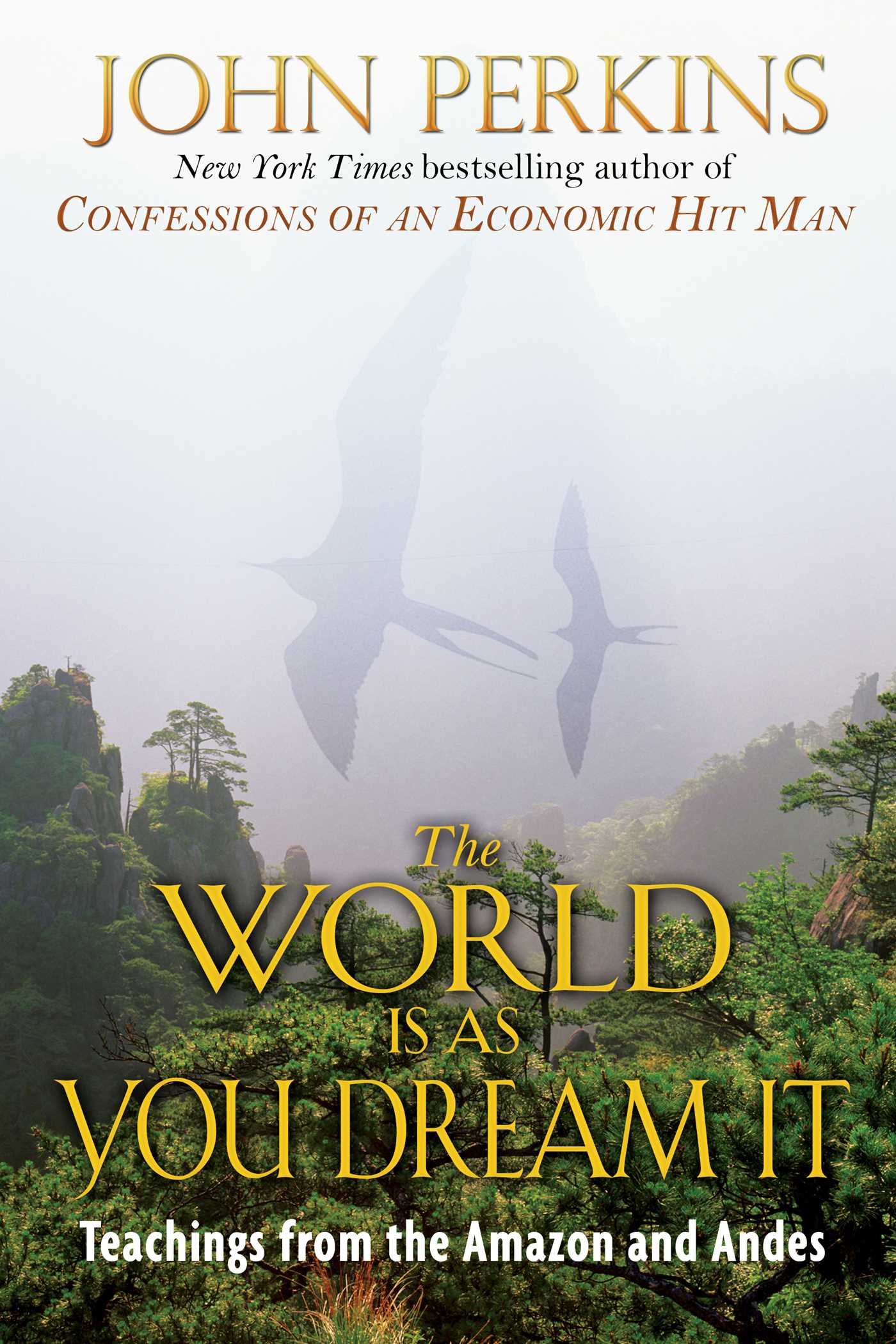 The World Is As You Dream It

Teachings from the Amazon and Andes

The New York Times bestseller Confessions of an Economic Hit Man documents John Perkins’ extraordinary career as a globe-trotting economic hit man. Perkins’ insider’s view leads him to crisis of conscience--to the realization that he must devote himself to work which will foster a world-wide awareness of the sanctity of indigenous peoples, their cultures, and their environments. Perkins’ books demonstrate how the age-old shamanic techniques of some of the world’s most primitive peoples have sparked a revolution in modern concepts about healing, the subconscious, and the powers each of us has to alter individual and communal reality.

Deep in the rain forests and high in the Andes of Ecuador, native shamans teach the age-old technique of dream change, a tradition that has kept the cultures of the Otavalans, Salasacans, and Shuar alive despite centuries of conquest. Now these shamans are turning their wisdom and power to the problem of curing a new kind of illness--that created by the industrial world’s dream of dominating and exploiting nature.

John Perkins tells the story of these remarkable shamans and of the U.S. medical doctors, psychologists, and scientists who have gone with him to learn the techniques of dream change. These shamanic teachings have sparked a revolution in modern concepts about healing, the subconscious, and the powers each of us has to alter individual and communal reality.

As soon as the engine died, the pilot climbed out over the wing. I followed close behind. The Shuar stood quietly, waiting. Their faces showed no sign of welcome or any other emotion. Once we reached them, I began introducing myself. Each shook my hand. Their attitude seemed to change. Several grinned broadly. One, a young man dressed more stylishly than the others, spoke excellent Spanish. His name was Tomas, he said; he attended the university in Quito and was home on vacation. I was very welcome. He ushered me away from the plane, to the edge of the landing strip.

“You wait here," he said, a gold tooth flashing in the sun. "When the plane is unpacked, we will go downriver in canoes." He pointed a narrow hole in the foliage at the edge of the jungle. I nodded agreement. He returned to the plane, where his companions had already begun unloading burlap bags and wooden crates. I watched for several minutes, then ambled over to the hole in the jungle wall. An enticing path, resembling a tunnel, led into the forest. I tried to peer in, but found only darkness.

I wasn't helping by simply waiting, so I stepped inside. It was cool and quiet. The smell of plants and damp soil enveloped me. An occasional birdcall was all that broke the silence in surroundings that felt distinctly mythical. I wandered on. A butterfly fluttered up and alighted on my shoulder. The path took an abrupt turn, and before me was a long, white sandy beach sloping to a swiftly flowing river.

Two dugout canoes were pulled onto the beach. Drawn to them, I felt the urge to touch them both. I went and stood between them and allowed my hands to explore their rough gunwalls. They were well used, full of nicks and bruises, yet about them was the feeling that they were valued, even loved. They were carefully patched in places. Paddles lying in them were beautifully crafted, their blades shaped like giant hearts, or perhaps palm leaves. Suddenly I felt a man’s presence behind me even before I turned to see him.

He had a shock of white hair. He wore no shirt, and his wrinkled skin led me to guess his age at over eighty. But it was his eyes that most amazed me. Deeply set and brilliant, they conveyed a sense of wisdom and of sadness. I thought I sensed in them a timeless knowledge that was at once hypnotic and frightening. “I am Numi," he said as he extended a weathered hand. "In Spanish, my first name is Alberto. You must be the gringo we're expecting.”

I had heard much about him during the days I had spent preparing for this trip. Himself part Shuar, he was married to a full-blood Shuar. Although a former teacher at the Catholic mission school, he was considered a powerful shaman. Above all, people spoke of him as a compassionate human being, a true teacher who formed a bridge between cultures.

He sat down on the edge of a dugout and motioned for me to do the same. Then he began asking questions. He was easy to be open with. His questions didn't pry; they were asked in the manner of a person deeply interested in learning. He was, I sensed, accustomed to helping others with their problems.

He confided that he had tried to return to civilization several times. "It's just too rough," he said. "I'm not tough enough for that kind of life."

I laughed at that. "Where I come from," I told him, “We think of the jungle as rough. If you can live here, you can survive anywhere."

He shook his head and turned to look down the river.

“I know what you mean, though,” I continued. “I’ve grown discouraged by the materialism of my culture. The crime, the divorce, the greed and pollution.”

“You have lost touch with Mother, “ he said. He stood up, held out his arms, and turned in a slow circle.

I watched him in silence. He clenched his hands into fists and drew them to his heart. “Now it begins to hurt.”

"Yes." Incidents from my own life came to mind. "I sometimes think that all we care about is money and dominating things. Other people. Other countries. Nature. That we've lost the ability to love.”

His eyes met mine, a stern look. "You haven't lost the ability." They held mine for the longest moment. Finally they turned away, to the jungle on the far bank.

"The world is as you dream it," he said at last. He walked to the edge of the water. "Your people dreamed of huge factories, tall buildings, as many cars as there are raindrops in this river. Now you begin to see that your dream is a nightmare." He bent to pick up a stone. "The problem is your country is like this pebble." He threw it far out into the river. "Everything you do ripples across the Mother."

I went to stand next to him. "I've seen the line where the destruction ends and the jungle begins." I thought about my own selfish life, the negative dreams I had given my energy to. "It’s a terrible thing. We have forced our greed into your world."

This brought an unexpected chuckle. "Yes," he said. He peered deep into my eyes. "But you want it to be different. Now you must learn to change. Perhaps that's why you've come, to learn from us."

"How can I change, Don Alberto? How can my people change this terrible situation we've created?”

His eyes held mine once again. "That's simple," he replied. "All you have to do is change the dream."

It sounded so easy. "How long will that take?”

He glanced once more down the river. “It can be accomplished in a generation. You need only plant a different seed, teach your children to dream new dreams."

John Perkins has traveled and worked with South American indigenous peoples since 1968. He currently arranges expeditions into the Amazon and has developed the POLE (Pollution Offset Lease on Earth) program with the Shuar and Achuar peoples as a means of preserving their culture against the onslaught of modern civilization. He is also the author of The Stress-Free Habit, Psychonavigation, Shapeshifting, and The World Is As You Dream It.

"A thrilling view of ancient native cultures that make their homes within the rain forest . . . vividly written."

"A magnificent book! It has a place of honor in my personal library. Perkins' The World Is As You Dream It is a masterly and understanding exploration of shamanic inner thinking. It is thought-provokingly written, a most valuable contribution."

"The World Is As You Dream It is one of those rare books that tells a riveting story at the same time as it provides deep insights into what makes us who we are and the world what it is. I was so riveted to this book that I couldn't put it down for a second until I finished reading it."

"Environmentalist, teacher, and activist Perkins established Earth Dream Alliance to preserve indigenous people, their environment, and their shamanic traditions. This book is a fascinating account of how he and others, through contacts with cultures such as that of the Otavalans, Salasacans, and Shuar, concluded "that in order for life to continue as we know it, we must all change our dream from the one of materialism and domination.. . to a more spiritual, cooperative, and Earth-honoring one." He recounts shamanic journeys to encourage the reader's self-empowerment, so that knowledge long buried by Western culture may be rediscovered. Recommended for large public and academic libraries, especially those with New Age and anthropological collections."

“The dream not only drives the action, it also guides the action. Through John Perkins’s narrative we learn this truth as it is taught with special vividness by the indigenous people of South America.”

The World Is As You Dream It

Teachings from the Amazon and Andes