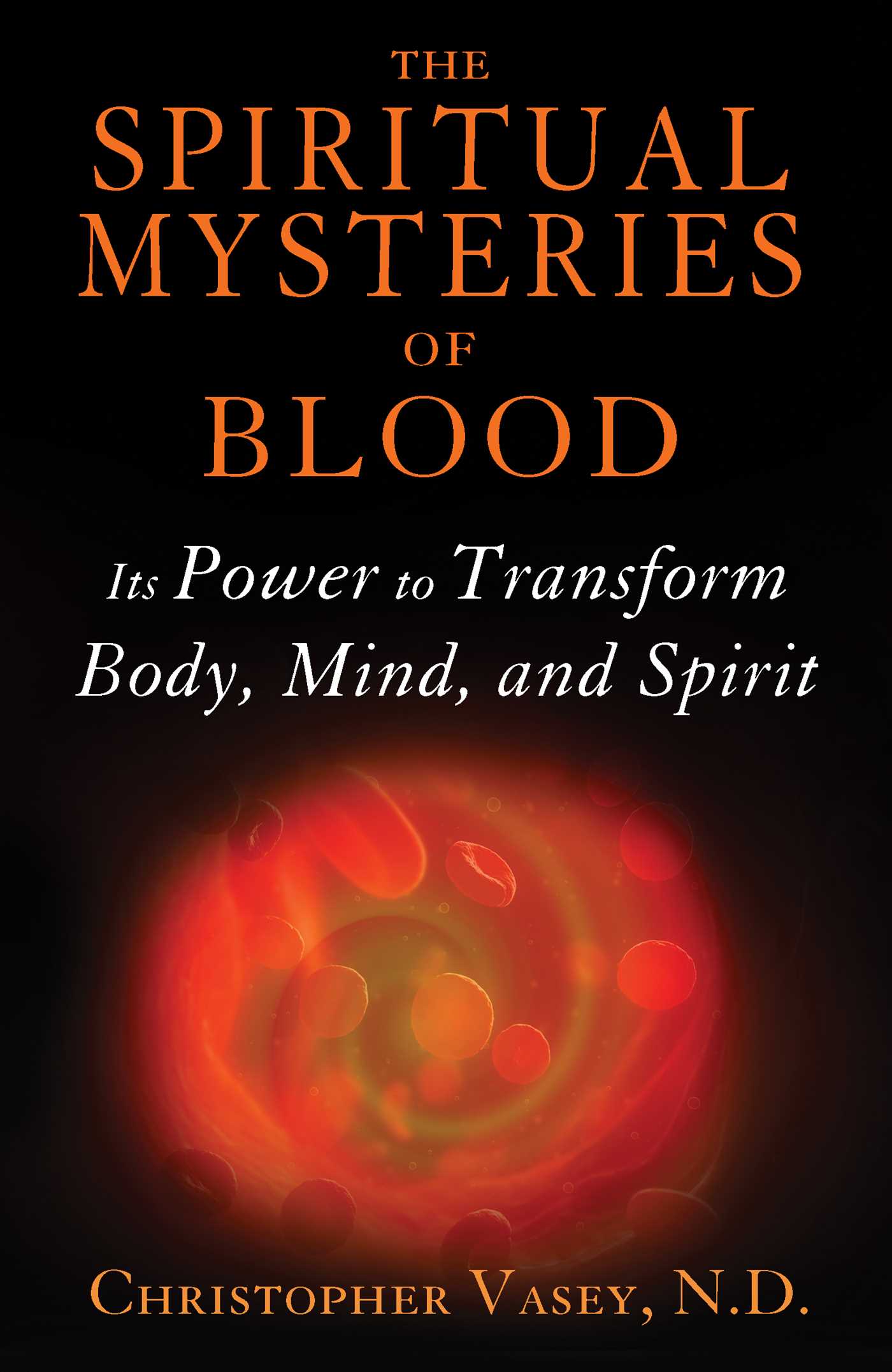 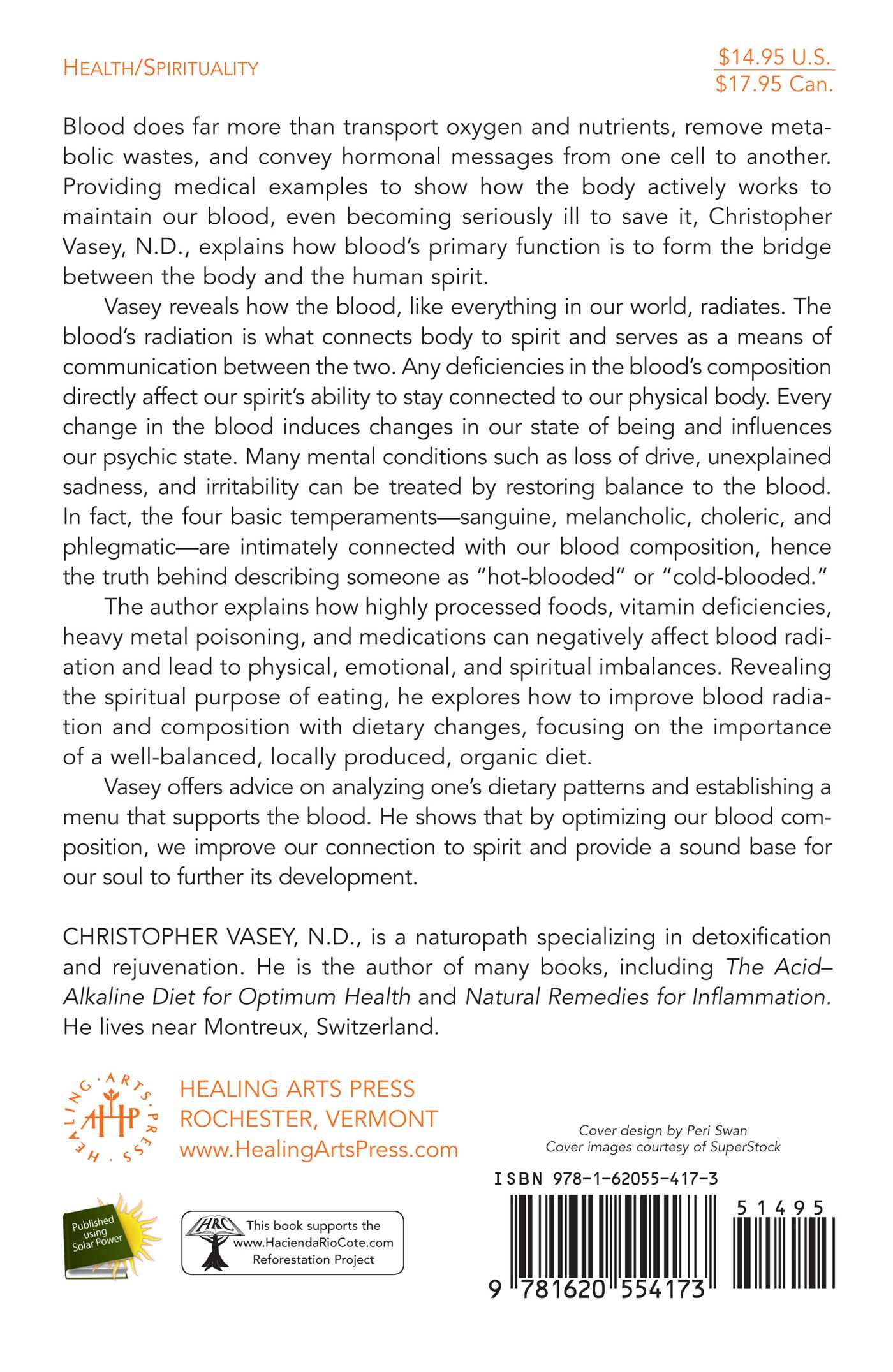 The Spiritual Mysteries of Blood

Its Power to Transform Body, Mind, and Spirit

• Provides advice on the ideal diet for each individual, whether omnivore, vegetarian, or allergy-prone, to optimize blood radiation

Blood does far more than transport oxygen and nutrients, remove metabolic wastes, and convey hormonal messages from one cell to another. Providing medical examples to show how the body actively works to maintain our blood, even becoming seriously ill to save it, Christopher Vasey, N.D., explains how blood’s primary function is to form the bridge between the body and the human spirit.

Vasey reveals how the blood, like everything in our world, radiates. The blood’s radiation is what connects body to spirit and serves as a means of communication between the two. Any deficiencies in the blood’s composition directly affect our spirit’s ability to stay connected to our physical body. Every change in the blood induces changes in our state of being and influences our psychic state. Many mental conditions such as loss of drive, unexplained sadness and irritability can be treated by restoring balance to the blood. In fact, the four basic temperaments--sanguine, melancholic, choleric, and phlegmatic--are intimately connected with our blood composition, hence the truth behind describing someone as “hot-blooded” or “cold-blooded.”

The author explains how highly processed foods, vitamin deficiencies, heavy metal poisoning, and medications can negatively affect blood radiation and lead to physical, emotional, and spiritual imbalances. Revealing the spiritual purpose of eating, he explores how to improve blood radiation and composition with dietary changes, focusing on food that is organically produced and additive-free to avoid introducing any toxins or artificial ingredients into the bloodstream.

Vasey offers advice to find the ideal diet for each individual, whether omnivore, vegetarian, or allergy-prone. He shows that by optimizing our blood composition, we improve our connection to spirit and provide a sound base for our soul to further its development.

Five
The Influence of the Blood on the Spirit

In the previous chapter we discussed the role of blood radiation as a bridge between body and spirit. Now we shall see what part blood radiation plays in the perceptive capacity of the spirit.

Blood Radiation and the Spirit’s Perception of Its Surroundings

The main task of the blood consists of offering the spirit the radiations it requires. These radiations depend on the composition of the blood. Each blood component--red blood cells, proteins, minerals, etc.--plays its role in the formation of the overall radiation. Healthy blood, which contains all these components in certain exact quantities, therefore offers the spirit all the necessary radiations.

If the levels of the different components change, the blood radiation also changes. If one of the substances needed for forming the blood is missing then the corresponding radiation is no longer present. The spirit is then deprived of that particular radiation. If on the other hand some substance suddenly appears in the blood that normally is not a part of blood composition--for instance after poisoning--then the blood radiation will again be changed but in a way unfamiliar to the spirit. Depending on the substance, the effect on the blood could merely throw the person a little off balance or he could become completely perturbed. The connection between the spirit and the body could even be put at risk.

The spirit’s perception of its surroundings is mediated through the blood radiations. Each one, according to its nature, its properties, and its “color,” contributes to providing the spirit the entire range of radiations needed for its activity in the material world and for the absorption of impressions and information from its earthly surroundings.

The importance of blood radiation goes far beyond anything previously imagined. Let us look at a few examples.

When the blood sugar level is 95 mg/dL, a person feels comfortable, has drive, is dynamic and enterprising. But when the glucose content falls to 60 or 50 mg/dL he feels tired and unwell. Not only is there no more energy, but his entire view of the world changes. Where just a short while ago it was rosy, now it becomes dark and gray. A person in a hypoglycemic crisis becomes anxious and afraid of all kinds of things not seen as frightening by those around him; simple questions become insurmountable problems. No reasoning or encouragement is of any help. And just as quickly as his outlook darkened, with the return of a normal blood sugar level, the world again becomes as beautiful and simple as before.

Other substances that change the blood’s radiation--for instance, heavy metals such as lead--can originate from air, water, or soil pollution.

Symptoms of lead toxicity are long-term, leading to impairment of memory and concentration. A person whose blood contains too much lead is subject to delusions, nightmares, and hallucinations.

According to a study undertaken in Switzerland, the lead concentration in the blood of convicts is twice as high as in other population groups. Of course lead does not create criminals, but in changing the blood radiation it contributes to clouding perception and judgment.

Even a substance that is beneficial in small quantities can have detrimental effects on blood radiation at higher doses. The normal blood level of copper is between 64 and 143 μg (micrograms) per 100 g of blood. If the level of copper increases beyond the normal range, harmful effects appear. Everything the spirit sees makes it irritable and hot tempered, as well as depressed and paranoid.

To counteract this condition and lower the copper content of the blood, we use its antagonist, zinc. Taking zinc gets rid of the surplus copper and at the same time changes the blood radiation and the general condition of the patient. His usual temperament quickly returns, and he again feels full of joy and love toward those around him. However, his state of well-being would again be lost as soon as his copper level rises. A patient who requires this treatment easily sees how his condition improves as long as he takes zinc on a regular basis, and how he worsens when he forgets to take it.

Sensitivity to various substances, dietary or otherwise, varies from one person to the next. The same substance can be perfectly well tolerated by a great number of people but can cause serious difficulties for others.

Since the early twentieth century, a new and unusual pattern of behavior has been seen among the youth in countries around the world. These children are hyperactive, unable to sit still, moving constantly. Their power of concentration is low, and they are easily distracted. They cannot keep to one activity, frequently jump from one thing to another, and end up finishing nothing. They can be careless, absentminded, and neglectful. In spite of a great need for affection, they have difficulty establishing relationships, mostly because of their unpredictable, stubborn, and unmanageable nature.

One says of these children that they act as if they were “being driven by someone else,” seemingly oblivious, unconcerned, and “absent.” The core of their personality, their spirit, does not seem to be present and in control of the situation. Their body acts on its own, as if controlled by something stronger than them.

Parents, teachers, and therapists who sought to help these children gradually became aware that they were dealing with something quite specific, and that the usual explanations like parent-child conflicts, spoiling, etc., did not apply. It was eventually recognized that the behavioral disturbances manifested when the diet was changed from baby food to their present diet. It turned out to be a reaction to an additive, phosphate, a preservative in meat and sausages also used as a flavor enhancer in soups and colas and as an anti-caking agent.

By following a strict diet, without phosphates, the abnormal blood radiation can be corrected, giving the child every chance to succeed in life.
Christopher Vasey

Christopher Vasey, N.D., is a naturopath specializing in detoxification and rejuvenation. He is the author of The Acid-Alkaline Diet for Optimum Health, The Naturopathic Way, The Water Prescription, The Whey Prescription, and The Detox Mono Diet. He lives near Montreux, Switzerland.

The Spiritual Mysteries of Blood

Its Power to Transform Body, Mind, and Spirit

SEE ALL
See more by Christopher Vasey
Thank you for signing up, fellow book lover!