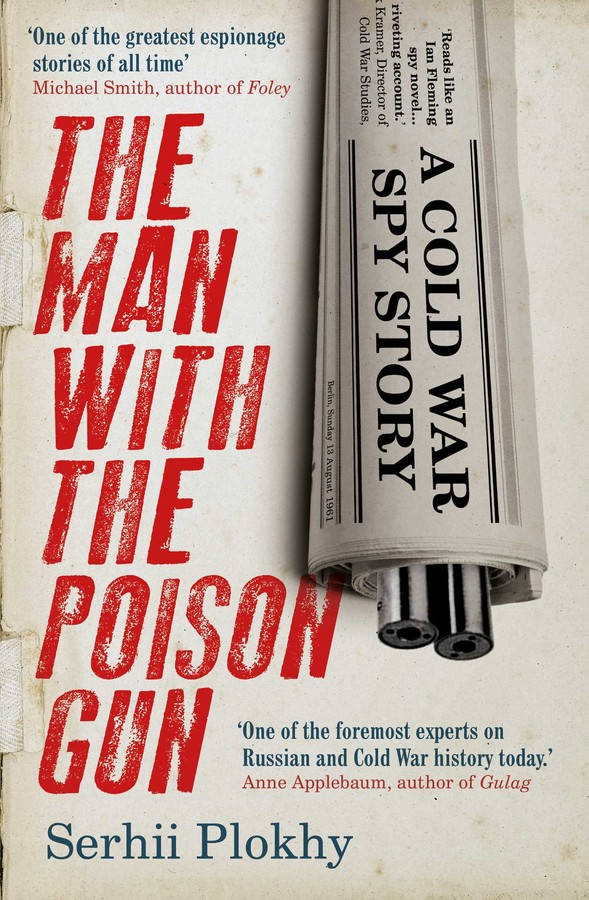 The Man with the Poison Gun

1961. The height of the Cold War. Just hours before work begins on the Berlin Wall, a KGB assassin and his young wife flee for the West before the Iron Curtain comes down and traps them in the East forever.

This gripping story of real-life espionage and intrigue began when the Soviets invented a special weapon that killed without leaving a trace and put it in the hands of Bogdan Stashinsky. It is a tale of exploding parcels, fake identities, forbidden love and a man who knew the truth about the USSR’s most classified programme. By the time Stashinsky had his day in court, the whole world was watching.

‘Remarkable…moves nimbly from midnight shenanigans in Berlin to the bigger picture of superpowers arguing over captive nations.’

‘Brims with skulduggery…balances its cloak-and-dagger element with historical insight.’

‘One of the greatest espionage stories of all time. Plokhy’s riveting tale of how a KGB assassin came in from the cold reads like a thriller because it is a thriller and all the more powerful because every word is true.’

‘This is a remarkable story about one Soviet agent’s attempt to free himself from the overweening and terrifying grip of the KGB at the height of the Cold War. Serhii Plokhy superbly captures the tense mood of the late 1950s and early 1960s in the USSR...thrilling.’

‘Evoking classic spy thrillers, Serhii Plokhy – one of the foremost experts on Russian and Cold War history alive today – masterfully tells the stranger than fiction tale of soviet spy Bogdan Stashinsky and the most publicized assassination case of the Cold War.’

– Anne Applebaum, author of Gulag: A History and Iron Curtain

‘The Man with the Poison Gun is the classic old-school Cold War spy tale. It’s all here—the trench coats, the cigarette smoke, the high stakes, the special weapons—deeply documented and smoothly told by Professor Plokhy. In the literature on 20th-century espionage, this book belongs on the top shelf.’

‘This book often reads like an Ian Fleming spy novel, but it is actually about real events that occurred during the tensest phase of the Cold War in the late 1950s and early 1960s. Serhii Plokhy provides a riveting account of the exploits of a Soviet assassin who used poison gas to kill exiled opponents of the Soviet regime amid East-West preparations for all-out war. Plokhy’s meticulously researched book sheds valuable light on the Soviet regime’s continued use of political assassinations in foreign countries long after the death of Joseph Stalin. A wonderful read for scholars and spy novel fans alike.’

‘A gripping portrait of an assassin and his journey from recruitment to mission to defection, The Man with the Poison Gun exhumes one of the Cold War’s stranger episodes—the KGB’s murder of Ukrainian émigrés with a spray gun that squirted poison. Author Serhii Plokhy tells an evocative and informative tale, based on original archival research, that immerses us in the tradecraft of Soviet spies operating in Western Europe.’

– Peter Finn, co-author of The Zhivago Affair: The Kremlin, the CIA, and the Battle Over a Forbidden Book

‘Serhii Plokhy, one of the most brilliant historians of our era, has retraced the steps of a murderer and this gripping book is the result. The Man with the Poison Gun will appeal equally to students of history and lovers of spy thrillers.’

– Mary Elise Sarotte, author of The Collapse: The Accidental Opening of the Berlin Wall

‘Serhii Plokhy has alighted upon a fascinating episode in the history of Soviet intelligence…Plokhy, a leading Harvard professor, details the story in startling clarity and pinpoint accuracy from an impressive array of sources, German, Russian, Ukrainian and American. Yet he carries his learning lightly, which makes for a very readable story that could as well have emerged from the pen of a spy thriller writer.’

‘An extraordinary story told with verve and scholarship.’

The Man with the Poison Gun