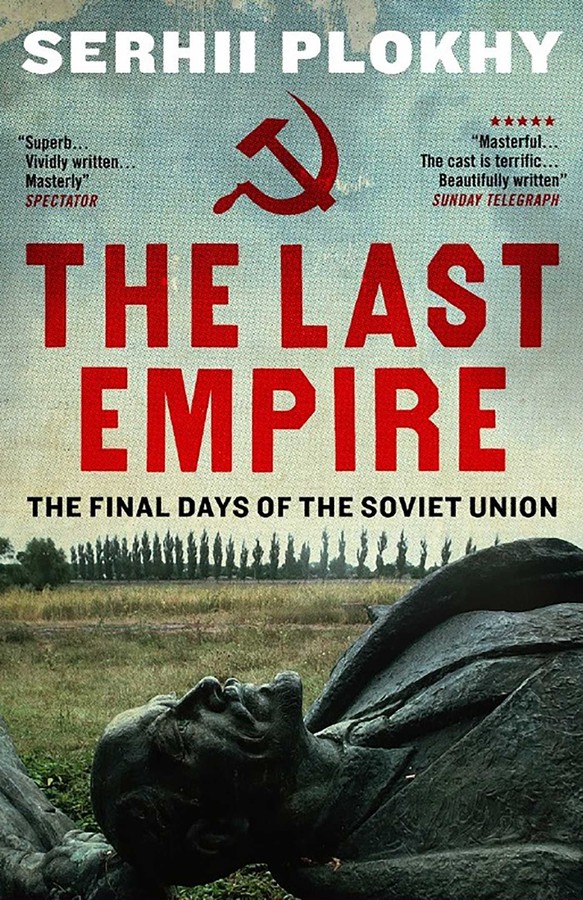 The Final Days of the Soviet Union

BY THE AUTHOR OF CHERNOBYL: HISTORY OF A TRAGEDY, WINNER OF THE BAILLIE GIFFORD PRIZE 2018

On Christmas Day 1991 Mikhail Gorbachev resigned as president of the Soviet Union. By the next day the USSR was officially no more and the USA had emerged as the world’s sole superpower. Award-winning historian Serhii Plokhy presents a page-turning account of the preceding five months of drama, filled with failed coups d’état and political intrigue.

Honing in on this previously disregarded but crucial period and using recently declassified documents and original interviews with key participants, he shatters the established myths of 1991 and presents a bold new interpretation of the Soviet Union’s final months. Plokhy argues that contrary to the triumphalist Western narrative, George H. W. Bush desperately wanted to preserve the Soviet Union and keep Gorbachev in power, and that it was Ukraine and not the US that played the key role in the collapse of the Soviet Union. The consequences of those five months and the myth-making that has since surrounded them are still being felt in Crimea, Russia, the US, and Europe today.

With its spellbinding narrative and strikingly fresh perspective, The Last Empire is the essential account of one of the most important watershed periods in world history, and is indispensable reading for anyone seeking to make sense of international politics today.

‘Written like a good thriller, The Last Empire recounts how chance events and quirky personalities led within a few months in 1991 to the disintegration of the empire built and maintained by generations of Russian tsars and Soviet apparatchiks’.

'A poignantly accurate examination of the last four months in the existence of the USSR...a grippingly captivating story'.

‘Fascinating and readable… the cast is terrific… Beautifully written’

'Almost a day-by-day, blow-by-blow account of the actions and reactions of the main figures… Very relevant to today's Ukrainian crisis... The dramatic events of the second half of 1991 are very well recounted'

‘Serhii Plokhy’s great achievement in this wonderfully well-written account is to show that much of the triumphalist transatlantic view of the Soviet collapse is historiographical manure… The author explains as no one in English has until now, just how central Ukraine was to the viability of any sort of Soviet bloc… it’s bracing and timely… well worth reading’

‘A superb work of scholarship, vividly written, that challenges tired old assumptions with fresh material from East and West, as well as revealing interviews with many major players... masterly’

'In this highly original reanalysis, drawing on rarely used sources scattered from Texas to Ukraine, Serhii Plokhy gives us a whole new perspective on the Fall of the Soviet Union. Did the USA really ‘win’ the Cold War, he asks – or did democracy undo the Soviet Empire from the inside?'

– Ian Morris, Professor of History at Stanford University and author of Why the West Rules – For Now

'Gripping, vivid and incisive – essential reading for anyone wanting to counter modern Russian myth-making about the Soviet collapse.'

– Edward Lucas, senior editor at the Economist and author of The New Cold War

'Indispensable. At last, a definitive account of the breakup of the USSR: for the first time, Serhii Plokhy tells the story not just from the point of view of Moscow, and not from Washington, but also from Ukraine and the other republics where many of the most important decisions were actually made. If you don't understand what really happened in 1991, then you'll find it impossible to understand the politics of the region today.'

'A brilliant work of political narrative: vivid, original, urgent and, above all, wise. Serhii Plokhy’s dramatic account of the high politics behind the collapse of the Soviet Union could not be more timely. In the context of what many see as a new Cold War between Russia and the West, it is crucial that we understand what really happened in 1991.'

'By far our best account yet of the death spiral of the USSR. Serhii Plokhy’s fine book combines a colorful, fast-paced narrative with trenchant analysis of key players in the Soviet collapse.'

– William Taubman, Pulitzer Prize-winning author of Khrushchev: The Man and His Era

'A masterful account of the end of the Soviet Union. The narrative tale alone, enriched by reams of new evidence, makes it well worth reading for anyone interested in the making of the contemporary world. But The Last Empire is equally notable for its penetrating analysis. It is particularly revealing on the contradictions built into US policy and on the contributions to the outcome of the many nations of the USSR, including the Ukrainians, whose pivotal role has often been neglected in previous studies.'

– Timothy Colton, Professor of Government at Harvard University and author of Yeltsin: A Life

'Masterful... Provocatively places Ukrainian independence as the central factor in the Soviet Union’s collapse. Gripping reading, full of surprises and revelations for everyone, especially on the American role in this revolutionary event.'

– Vladislav Zubok, Professor of International History at the London School of Economics

The Final Days of the Soviet Union