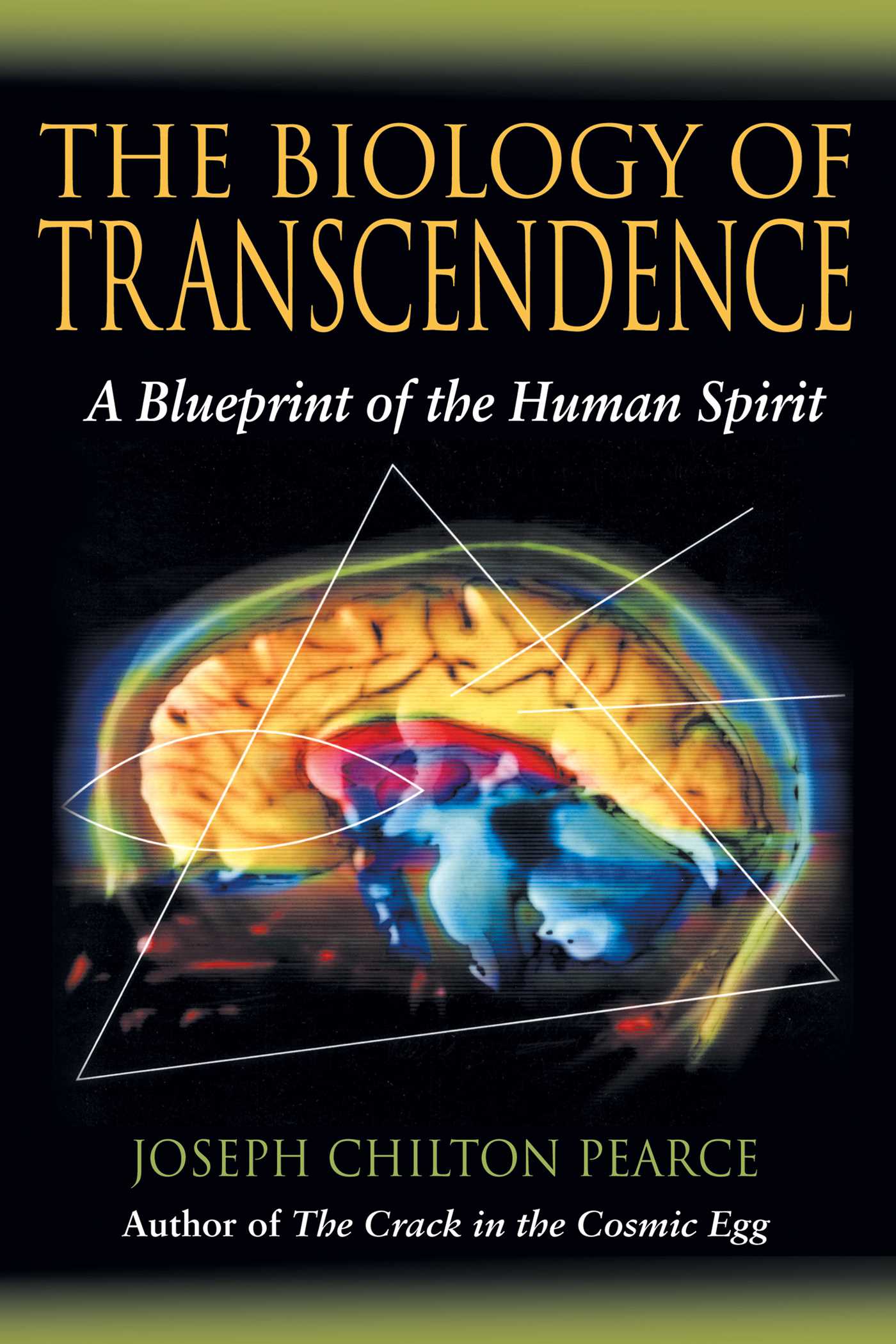 • Explores the idea that Jesus, Lao-tzu, and other great beings in history are models of nature’s possibility and our ability to achieve transcendence

Why do we seem stuck in a culture of violence and injustice? How is it that we can recognize the transcendent ideal represented by figures such as Jesus, Lao-tzu, and many others who have walked among us and yet not seem to reach the same state?

In The Biology of Transcendence Joseph Chilton Pearce examines the current biological understanding of our neural organization to address how we can go beyond the limitations and constraints of our current capacities of body and mind--how we can transcend. Recent research in the neurosciences and neurocardiology identifies the four neural centers of our brain and indicates that a fifth such center is located in the heart. This research reveals that the evolutionary structure of our brain and its dynamic interactions with our heart are designed by nature to reach beyond our current evolutionary capacities. We are quite literally, made to transcend.

Pearce explores how this “biological imperative” drives our life into ever-greater realms of being--even as the “cultural imperative” of social conformity and behavior counters this genetic heritage, blocks our transcendent capacities, and breeds violence in all its forms. The conflict between religion and spirit is an important part of this struggle. But each of us may overthrow these cultural imperatives to reach “unconflicted behavior,” wherein heart and mind-brain resonate in synchronicity, opening us to levels of possibility beyond the ordinary.

Looking up at the starry sky, poet Walt Whitman asked:

When we become the enfolders of those orbs,
and the pleasures and knowledge of everything in them,
shall we be satisfied then?
And my spirit answered No, we but level that lift
to pass and continue beyond.

"The ability to rise and go beyond" is the definition of transcendence and the subject explored in the following pages. While this force constitutes our nature and fires our spirit, an honest exploration of it must contend with this counter-question: Why, with a history so rich in noble ideals and lofty philosophies that reach for the transcendent, do we exhibit such abominable behaviors? Our violence toward ourselves and the planet is an issue that overshadows and makes a mockery of all our high aspirations.

Sat Prem, a French writer transplanted to India following World War II recently asked this question: "Why, after thousands of years of meditation, has human nature not changed one iota?" In the same vein, this book asks why, after two thousand years of Bible quoting, proselytizing, praying, hymn singing, cathedral building, witch burning, and missionizing has civilization grown more violent and efficient in mass murder? In exploring the issue of transcendence, we explore by default the issue of our violence. The two are intertwined.

A great being appeared some two millennia ago, looked at our religious institutions with their hierarchies of power, professional classes, policy makers, lawyers, and armies, and observed that we should "know them by their fruits." That is, we should ask: What are the actual, tangible results of these lofty religious institutions that we have known throughout history? If we examine them by the fruits they produce, rather than by the creeds, slogans, concepts, and public relations that sustain them, we would see that spiritual transcendence and religion have little in common. In fact, if we look closely, we can see that these two have been the fundamental antagonists in our history, splitting our mind into warring camps.

Neither our violence nor our transcendence is a moral or ethical matter of religion, but an issue of biology. We actually contain a built-in ability to rise above restriction, incapacity, or limitation and, as a result of this ability, possess a vital adaptive spirit that we have not yet fully accessed. While this ability can lead us to transcendence, paradoxically it can also lead to violence; our longing for transcendence arises from our intuitive sensing of this adaptive potential and our violence arises from our failure to develop it.

Historically our transcendence has been sidetracked--or derailed altogether--by our projection of these transcendent potentials rather than our development of them. We project when we intuitively recognize a possibility or tendency within ourselves but perceive this as a manifestation or capacity of some person, force, or being outside of ourselves. We seem invariably to project onto each other our negative tendencies (" . . . if it weren't for the likes of you . . . that government . . . those people . . . "), while we project our transcendent potentials onto principalities and powers "out there" on cloud nine or onto equally nebulous scientific laws. The transcendence we long for then seems the property of forces to which we are subject. Like radar, our projections bounce back on us as powers we must try to placate or with which we must struggle. Perennially our pleas to cloud nine go unheeded, our struggles against principalities and powers are in vain, and we wander in a self-made hall of mirrors, overwhelmed by inaccessible reflections of our own mind. Handed down through millennia, our mythical and religious projections take on a life of their own as the cultural counterfeits of transcendence.

Culture has been defined by anthropologists as a collection of learned survival strategies passed on to our young through teaching and modeling. The following chapters will explore how culture as a body of learned survival strategies shapes our biology and how biology in turn shapes culture. Religious institutions, cloaked as survival strategies for our minds or souls, are the pseudo-sacred handmaidens of culture brought about through our projections of the transcendent aspects of our nature. Thus this trinity of myth, religion, and culture is both the cause and source of our projections. Each element of the trinity brings the other into being and all three interlocking phenomena--myth, religion, and culture--are sustained by the violence they generate within us.

Our greatest fear, the late philosopher Suzanne Langer said, is of a "collapse into chaos should our ideation fail us." Culture, as the collected embodiment of our survival ideation, is the mental environment to which we must adapt, the state of mind with which we identify. The nature or character of a culture is colored by the myths and religions that arise within it, and abandoning one myth or religion to embrace another has no effect on culture because it both produces and is produced by these elements.

Science has supposedly supplanted religion--but it has simply become our new religious form and an even more powerful cultural support.

If our current body of knowledge, scientific or religious, is threatened, so are our personal identities because we are shaped by that body of knowledge. Such threat can lead us to behaviors that run counter to survival. This book explores how our violence arises from our failure to transcend, and how our transcendence is blocked by our violence; how it is that culture is a circular stalemate, a kind of mocking tautology, self-generative and near inviolate. That we are shaped by the culture we create makes it difficult to see that our culture is what must be transcended, which means we must rise above our notions and techniques of survival itself, if we are to survive. Thus the paradox that only as we lose our life do we find it.
Joseph Chilton Pearce

“This is a masterpiece of science and spirit, love over law, and the stunning biological truth of the capacity for transcendence that the universe has placed within us. Here, in brilliant and incisive words, is the foundation for a new mind and a new world.”

– Jean Houston, author of A Passion for the Possible and Jump Time

"The Biology of Transcendence will transform your worldview and change forever your understanding of our past, present, and future. Riveting, insightful, and penetrating, Pearce has laid out one of the most startling and powerful visions of our future. . . . You won't be able to put this book down, and when you've read it, you won't be able to stop talking about it with everybody you know."

– Thom Hartmann, author of The Last Hours of Ancient Sunlight

"I've spent over thirty years pioneering wellness programs, always trying to grasp why it is such a struggle for people to attain and maintain the well-being that is their birthright. In the last decade I finally came to appreciate what Pearce discovered long ago: that the heart and key to wellness lies in how we nurture our young--enabling them to thrive, rather than merely survive."

"Joseph Chilton Pearce has profoundly altered my view of religion and culture and has left me with both the understanding and the tools to go beyond limitations to the joy of love and all its possibilities."

– Carla Hannaford, Ph.D., author of Smart Moves: Why Learning Is Not All in Your Head and Awakening th

". . . an engaging blend of scientific research and personal accounts of altered states, [this book] outlines the anatomy of levels of consciousness."

"Rarely does a single book encompass such far reaching vistas and disturbing revelations as The Biology of Transcendence."

"Revolutionary significance for anyone...seeking clues on how to develop the magnificent but frustrated potential that is our birthright."

"...a survey of spiritual transcendence so linked to science that it earns a place of respect in the spheres of science, health, and metaphysics."

"This book must be read by anyone wanting a better future for the world."