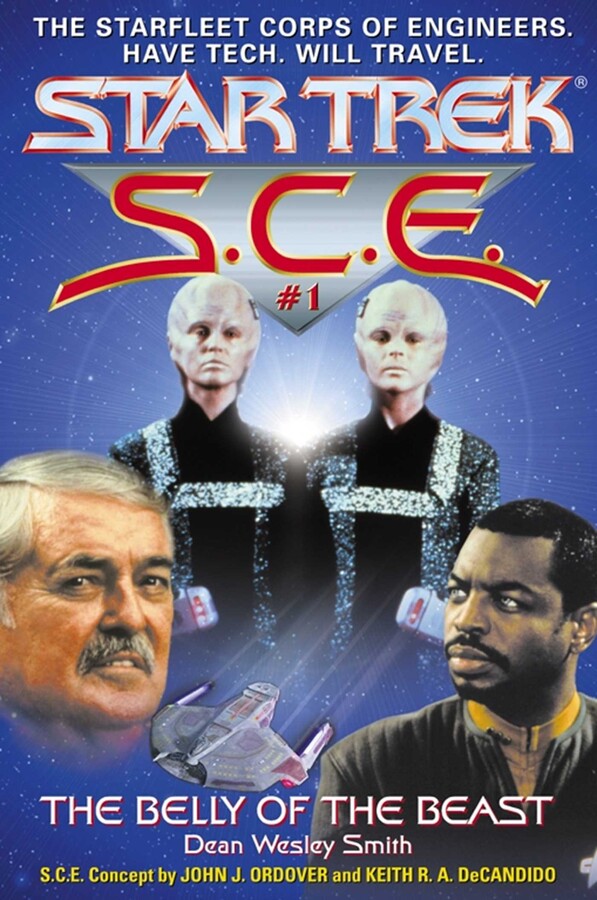 Star Trek: The Belly of the Beast

When ancient alien technology is found on a colony world, when robot soldiers from an eons-old interstellar battle restart their war in a highly populated sector, when a global computer system starts to break down or take over, in goes the Starfleet Corps of Engineers. Overseen by Captain Montgomery Scott from his office at Starfleet Headquarters, the S.C.E. can build, rebuild, program, reprogram, assemble, reassemble, or just figure out everything from alien replicators to to doomsday machines. Just don't expect them to perform miracles -- unless they have to.
The U.S.S. Enterpriseè has defeated a gigantic marauding starship from parts unknown. Now that the immediate threat has been neutralized, the S.C.E. has been called in to probe the vanquished hulk in search of both new technology and the secret of its origin. Lieutenant Commander Geordi La Forge has temporarily transferred from the Enterprise to assist Captain David Gold and the crew of the S.C.E. ship, the U.S.S. da Vinci, on this fascinating mission. La Forge works with Gold and his top-of-the-line group of technical specialists to unravel the high-tech mysteries of the supposedly dead alien vessel, only to discover that the real danger has just begun!

Considered one of the most prolific writers working in modern fiction, USA TODAY bestselling writer, Dean Wesley Smith published far over a hundred novels in forty years, and hundreds of short stories across many genres. He currently produces novels in four major series, including the time travel Thunder Mountain novels set in the old west, the galaxy-spanning Seeders Universe series, the urban fantasy Ghost of a Chance series, and the superhero series staring Poker Boy. During his career he also wrote a couple dozen Star Trek novels, the only two original Men in Black novels, Spider-Man and X-Men novels, plus novels set in gaming and television worlds.

Star Trek: The Belly of the Beast