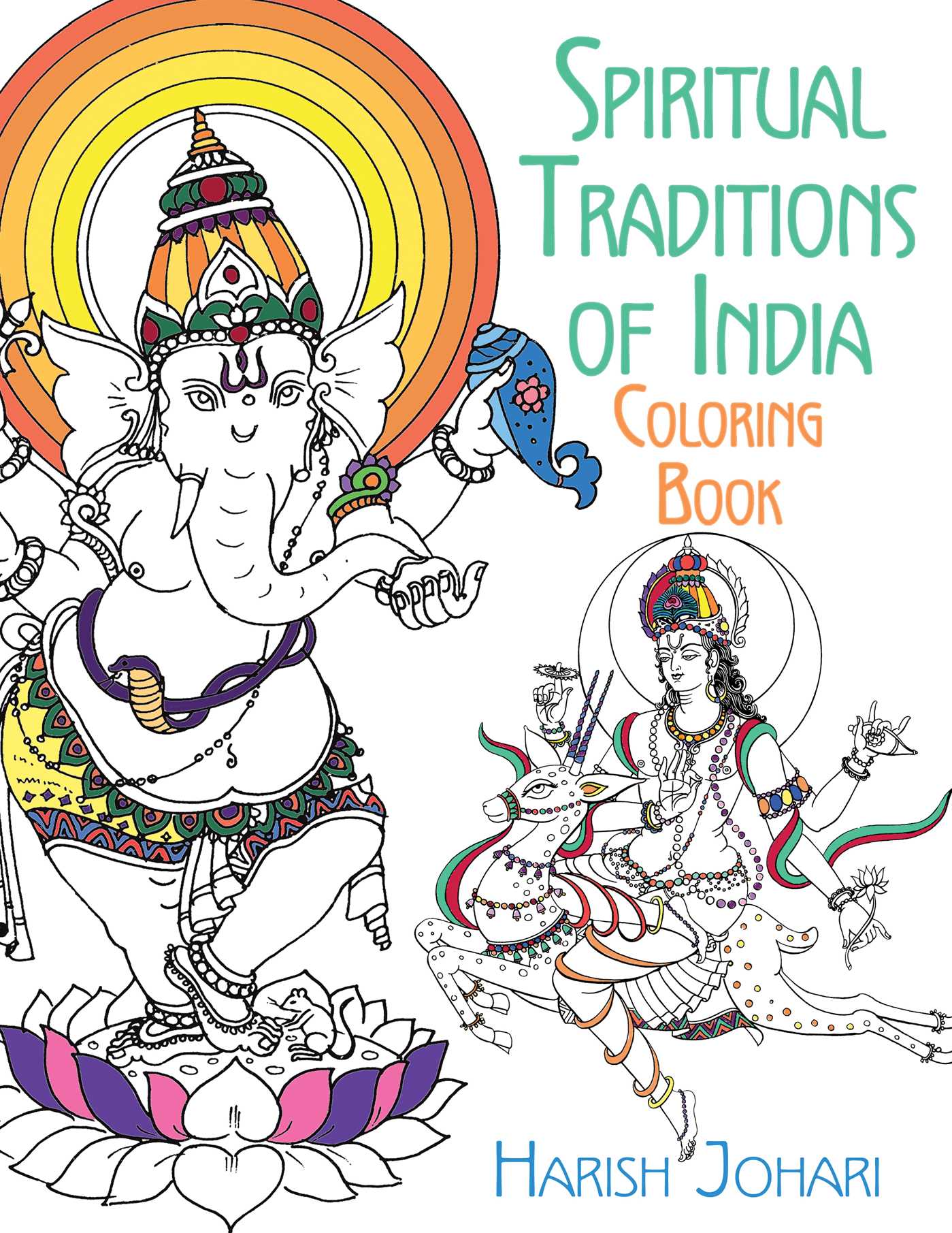 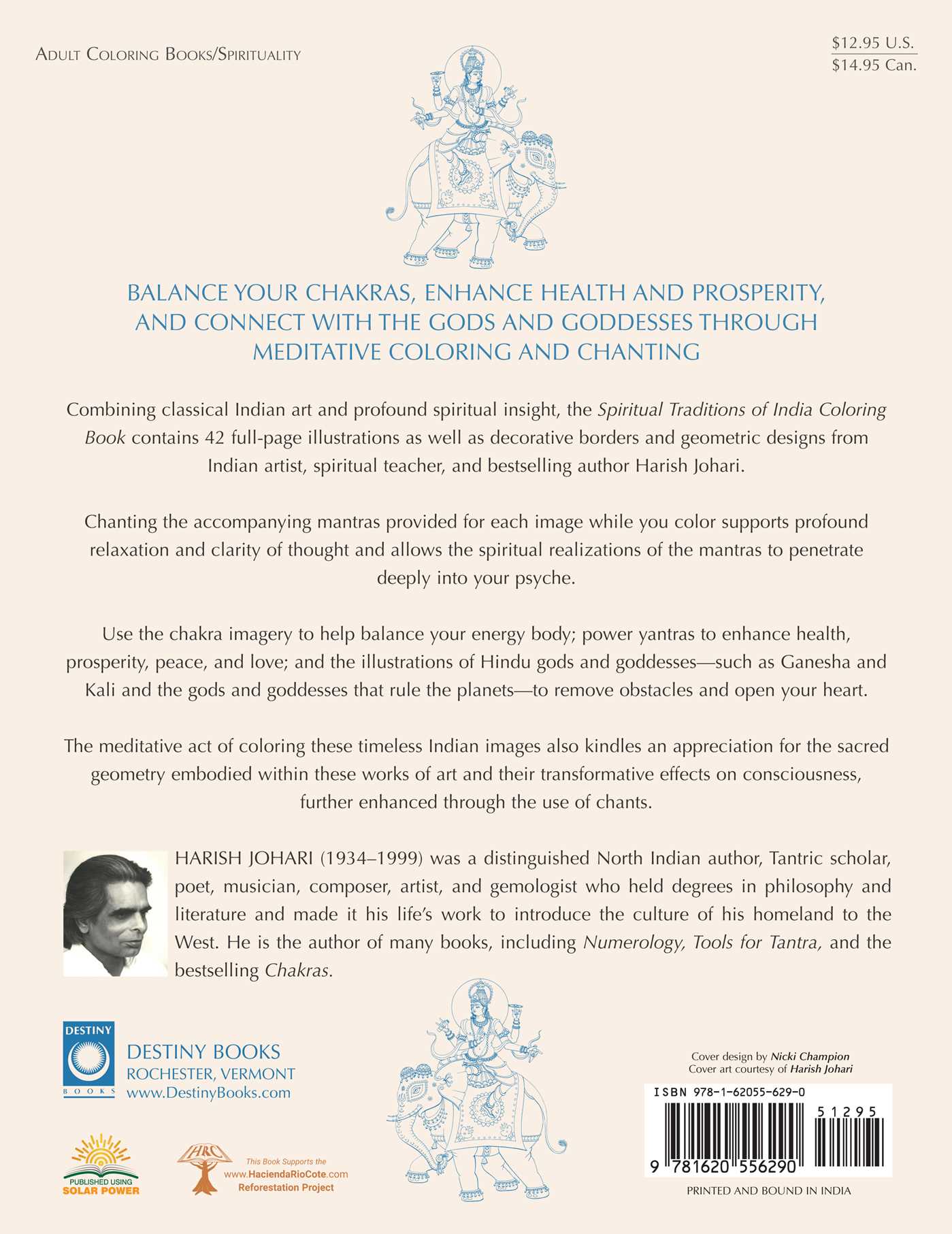 Balance your chakras, enhance health and prosperity, and connect with the gods and goddesses through meditative coloring

• Includes chakra imagery to balance your energy body; power yantras to enhance health, prosperity, peace, and love; and illustrations of Hindu gods and goddesses such as Ganesh and Hanuman to remove obstacles and open your heart

Combining authentic Indian art and profound spiritual insight, the Spiritual Traditions of India Coloring Book pairs line illustrations from accomplished traditional Hindu artist and spiritual teacher Harish Johari with meditative statements from his bestselling books. Focusing your mind on the accompanying mantras while you color supports profound relaxation and clarity of thought and allows the spiritual realizations of the mantras to penetrate deeply into your psyche.

Containing 42 coloring illustrations, the book includes chakra imagery, power yantras, planets, and scenes of Hindu gods and goddesses, such as Ganesh, Hanuman, Shiva, and Parvati. Coloring the chakras enables you to visualize the energy centers in your own body, enhancing your ability to open the chakras and balance your flow of energy. Coloring the power yantras allows you to align your mind and spirit with the energies of good health, tolerance, prosperity, peace, and love, attracting these virtues to your life. Coloring the planets, gods, and goddesses allows you to connect with these powerful entities, inviting their help and influence in your life.

Conveying the timeless wisdom of an ancient lineage passed down from teacher to student for thousands of years, Johari’s words and art reveal the tantric virtues of each yantra, chakra, mudra, celestial body, and deity, such as how Ganesh is the remover of obstacles and how Hanuman enables you to open your heart and experience the unconditional love for your friends, family, and loved ones. The meditative act of coloring these classical Indian images also kindles an appreciation for the sacred geometry embodied within these works of art and their transformative effects on consciousness.

About the Author and the Illustrations

Harish Johari (1934-1999) was a distinguished North Indian author, Tantric scholar, gemologist, poet, musician, composer, painter, and sculptor who held degrees in philosophy and literature and made it his life’s work to introduce the culture of his homeland to the West. He authored 12 books on Eastern spirituality, including Tools for Tantra, Chakras, Numerology, The Planet Meditation Kit, and Ayurvedic Healing Cuisine, and he created the illustrations that accompanied each of them.

The painting tradition founded by Harish is a combination of the overall spiritual Indian art traditions and the special wash painting technique that he learned from his teacher Shri Chandra Bal, who himself learned it from Shri Bhawani Prasad Mittal, who learned it at Shanti Niketan.

The style of the figures is a mixture of three existing forms of Indian artwork that can be found in the painted or sculptured art forms in temples throughout India.

The faces--specifically the eyes, nose, and lips--and the hands and feet are drawn in the style of the paintings located in the Ajanta caves. They represent a two-thousand-year-old fresco style of artwork.

The proportions used in the figures are like those of the sculptures in the Elephanta caves near Bombay. These proportions were chosen because they are so beautiful and delicate, unlike the proportions found in the Ajanta cave paintings, which are very heavy and result in dwarflike figures. The sculptures in the Elephanta caves represent a style that is thousands of years older than the familiar Rajasthan style of artwork that is generally recognized as Indian art.

The postures and movements are inspired by the ancient sculptures of the Ellora caves and the Khajoraho temple because of the grace, preciseness, and expressiveness that these sculptures exemplify.

The images can evoke spiritual feelings in the viewers, while for those that use the illustrations as objects of meditation, the images can become a vehicle for spiritual contact with the divine beings.

As Harish said of the subjects of Indian spiritual art, “science is very beautifully explained in Indian iconography; the entire science of physics, the science of psychology, the science of sociology, interpersonal relationships . . . all these things are interwoven in Indian painting and in mythology.”
Harish Johari

SEE ALL
See more by Harish Johari
Thank you for signing up, fellow book lover!