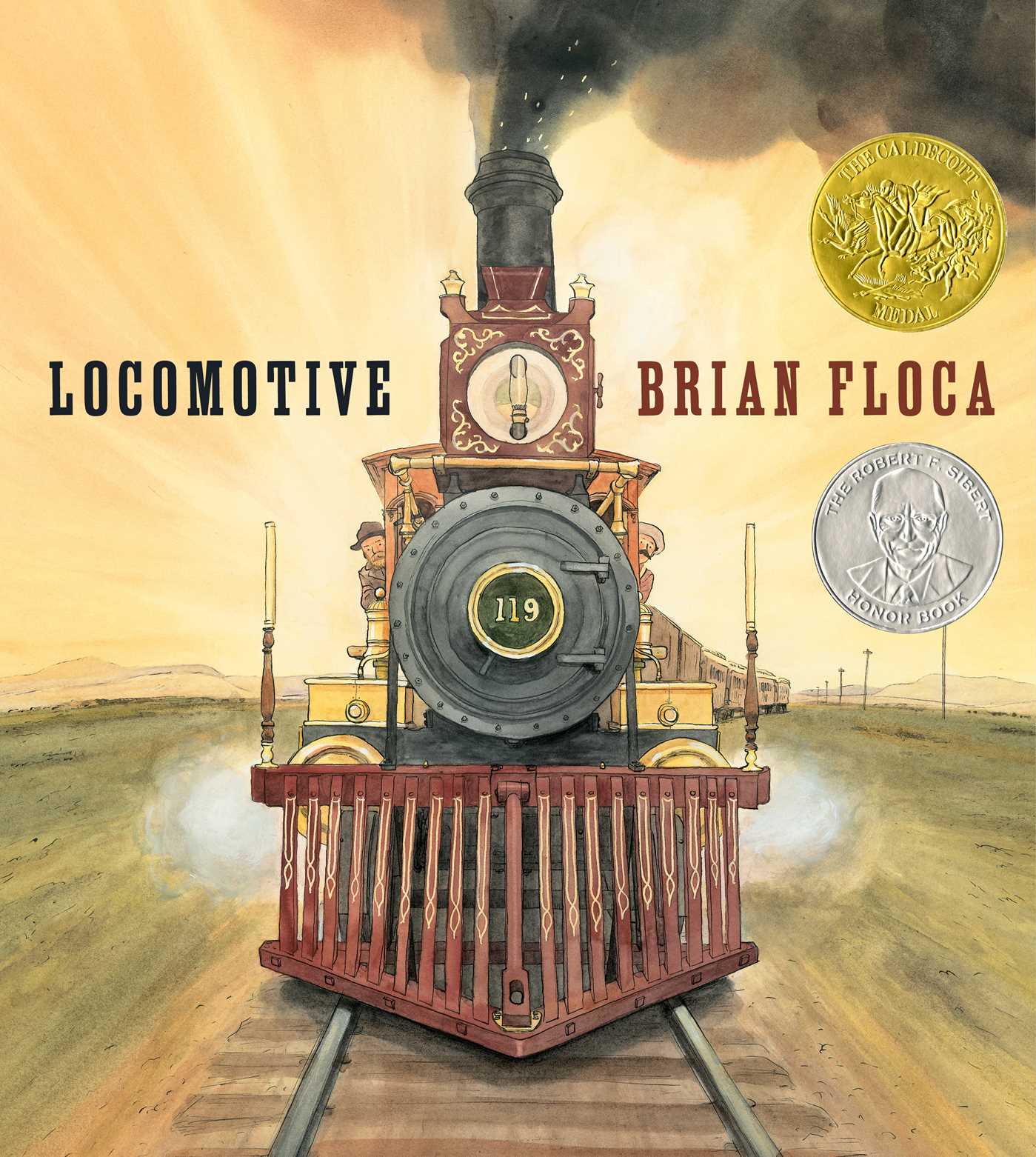 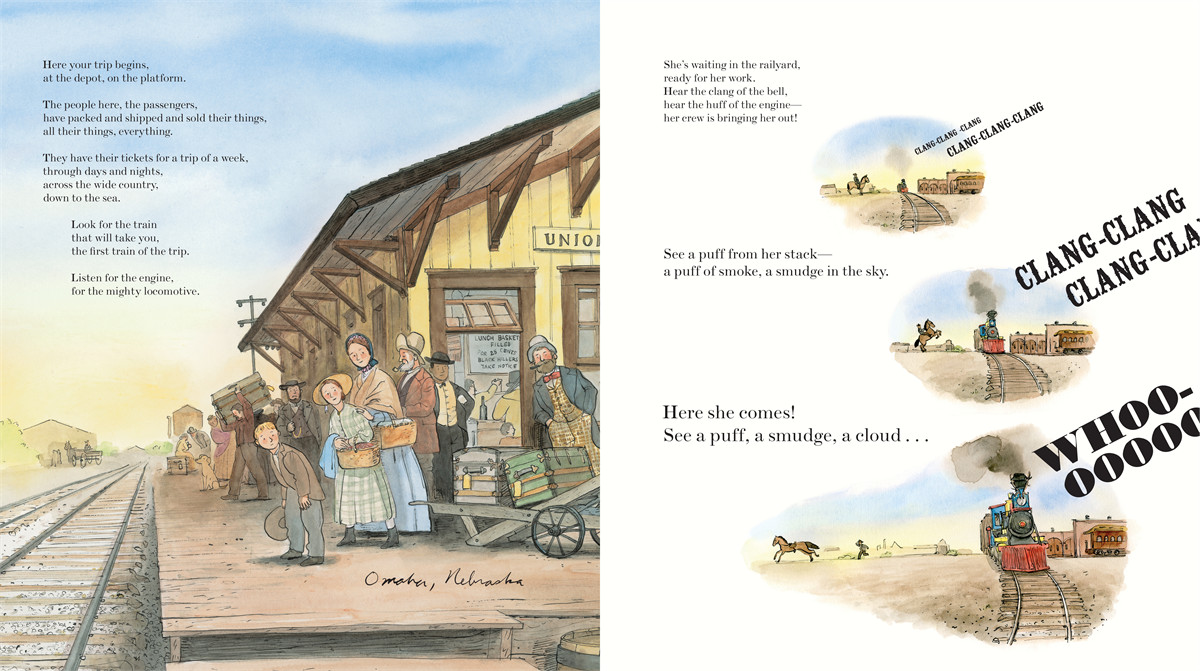 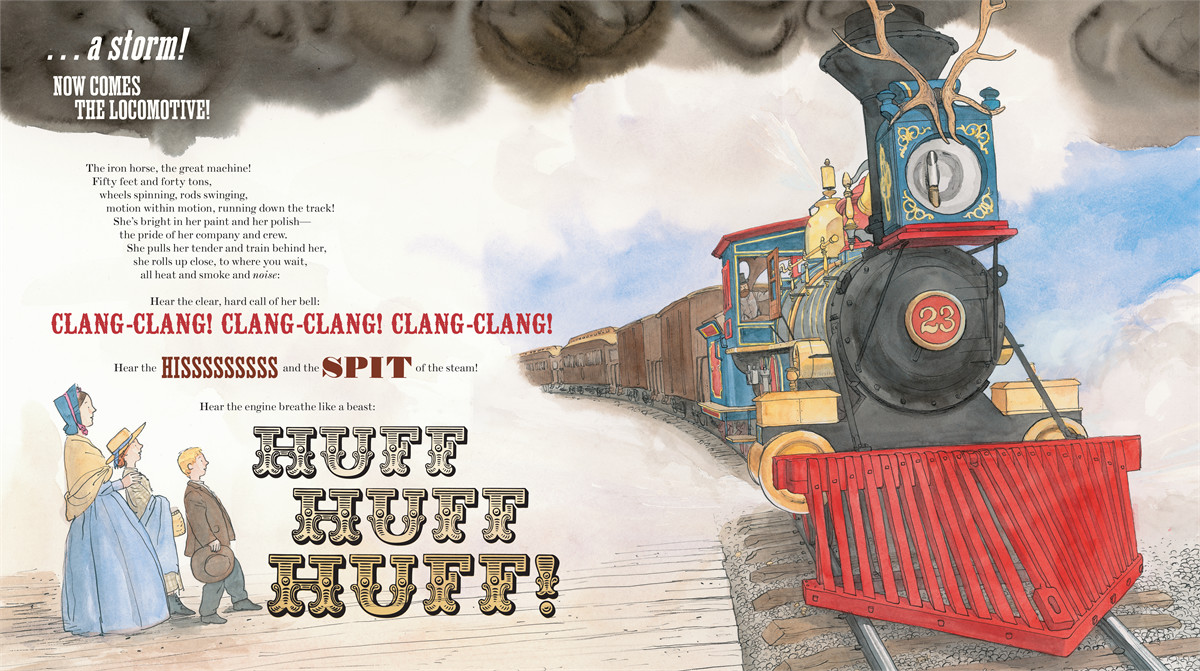 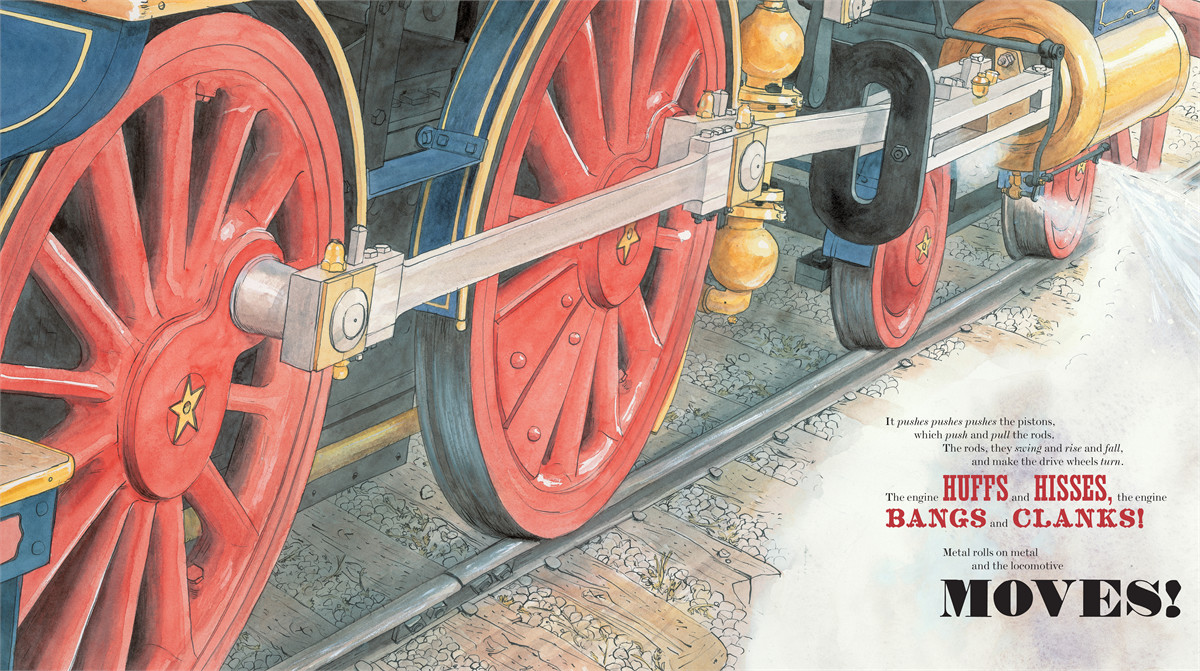 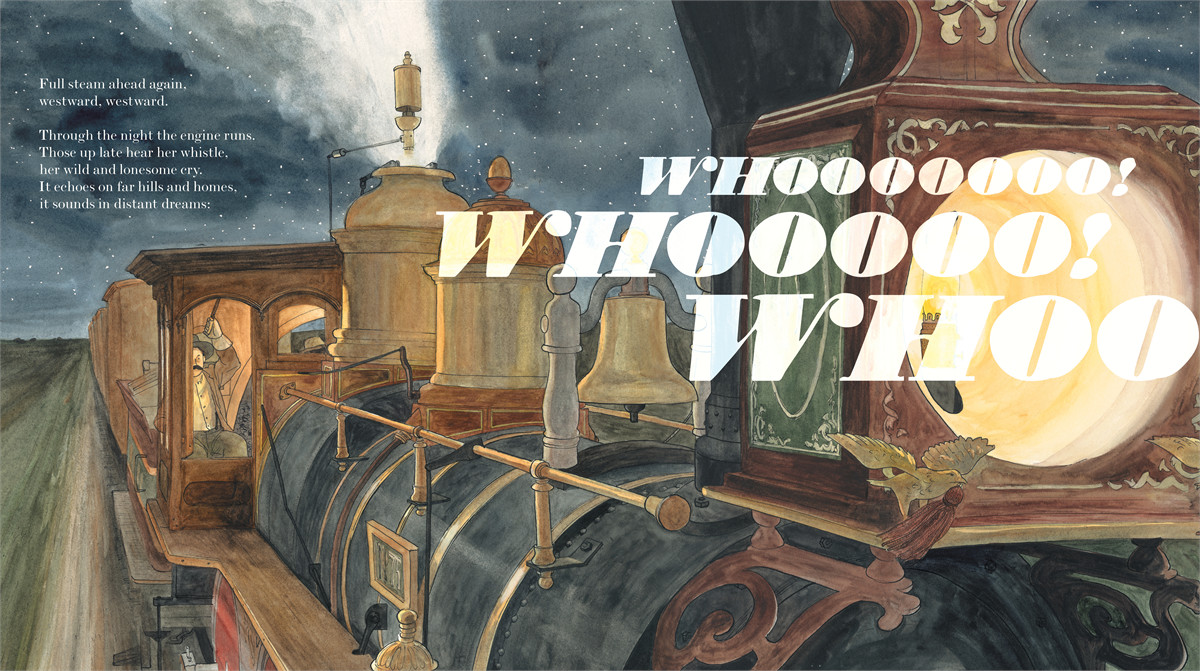 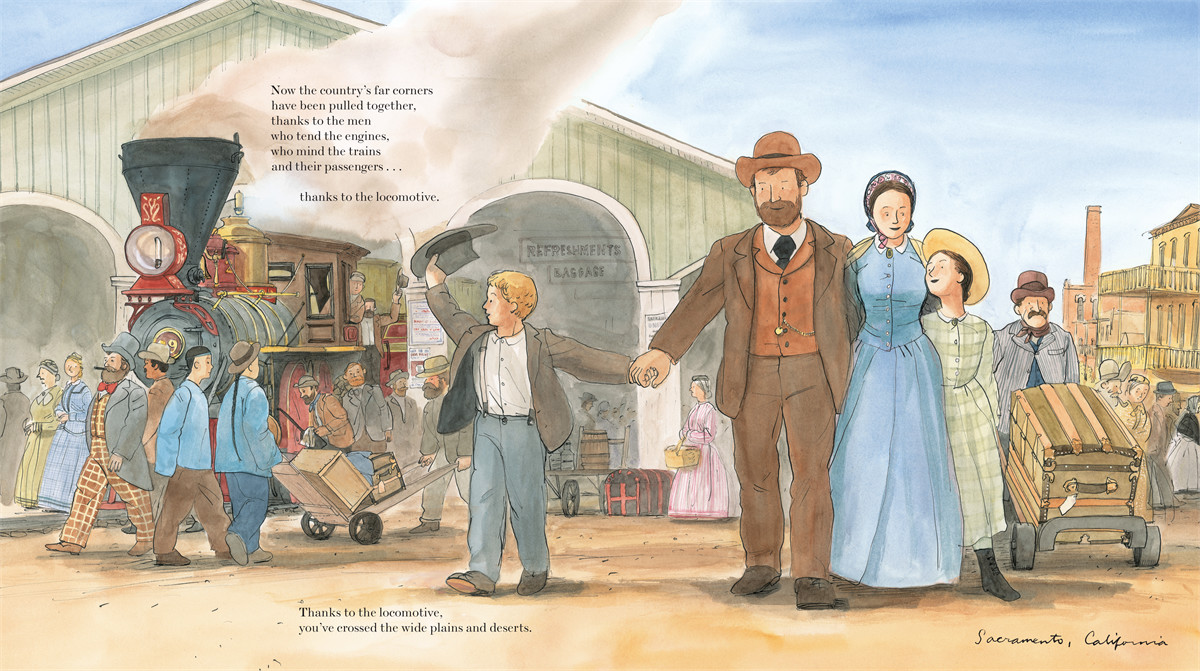 The Caldecott Medal Winner, Sibert Honor Book, and New York Times bestseller Locomotive is a rich and detailed sensory exploration of America’s early railroads, from the creator of the “stunning” (Booklist) Moonshot.


It is the summer of 1869, and trains, crews, and family are traveling together, riding America’s brand-new transcontinental railroad. These pages come alive with descriptive details of the journey: the sounds, speed, and strength of the mighty locomotives; the work that keeps them moving; and the thrill of travel from plains to mountain to ocean.

Come sit inside the caboose, feel the heat of the engine, watch the landscape race by. Come ride the rails, come cross the young country!

Brian Floca is the author and illustrator of the acclaimed picture books Locomotive, winner of the Caldecott Medal and a New York Times bestseller; Moonshot: The Flight of Apollo 11; and Lightship, each a Robert F. Sibert Honor Book. He is the illustrator of numerous additional books, including Avi’s Poppy series. You can visit him online at BrianFloca.com.

Brian Floca is the author and illustrator of the acclaimed picture books Locomotive, winner of the Caldecott Medal and a New York Times bestseller; Moonshot: The Flight of Apollo 11; and Lightship, each a Robert F. Sibert Honor Book. He is the illustrator of numerous additional books, including Avi’s Poppy series. You can visit him online at BrianFloca.com.

* "Floca took readers to the moon with the Apollo 11 mission in Moonshot (2009); now he takes them across the country on an equally historic journey of 100 years earlier.

In a collegial direct address, he invites readers to join a family—mother, daughter and son—on one of the first passenger trips from Omaha to Sacramento after the meeting of the Union Pacific and the Central Pacific in May 1869. With encyclopedic enthusiasm, Floca visually documents the trip, vignettes illustrating the train’s equipment as well as such must-know details as toilet and sleeping conditions. Full- and double-page spreads take advantage of the book’s unusually large trim for breathtaking long shots of the American landscape and thrilling perspectives of the muscular engine itself.... Unjustly undersung as a writer, Floca soars with his free-verse narrative, exploiting alliteration, assonance and internal rhyme to reinforce the rhythms of the journey. Frequent variations in font and type (“HUFF HUFF HUFF!” is spelled out in ornate, antique letters) further boost the excitement. Front endpapers provide detail on the building of the transcontinental railroad; back endpapers show the steam engine in cross section, explaining exactly how coal and water made it go.

Nothing short of spectacular, just like the journey it describes."

* “Floca follows up the acclaimed Moonshot: The Flight of Apollo 11 (2009) with this ebullient, breathtaking look at a family’s 1869 journey from Omaha to Sacramento via the newly completed Transcontinental Railroad…. It’s impossible to turn a page without learning something…multiple wow moments...will knock readers from their chairs. Fantastic opening and closing notes make this the book for young train enthusiasts.”

* "It all started with “a new road of rails/made for people to ride” where “covered wagons used to crawl.” Almost 150 years ago–just after the Civil War–the completion of the transcontinental railway radically changed both this country’s landscape and the opportunities of its people. The book traces the advent of cross-country train travel, focusing on an early trip from Omaha to Sacramento. As in Moonshot (2009) and Lightship (2007, both S & S), Floca proves himself masterful with words, art, and ideas. The book’s large format offers space for a robust story in a hefty package of information…the travelogue scheme will read aloud nicely and also offers absorbing details for leisurely personal reading. Substantial introductory and concluding sections serve older readers. There’s also a detailed explanation of the author’s efforts and sources in exploring his subject. Train buffs and history fans of many ages will find much to savor in this gorgeously rendered and intelligent effort.”

* “In 1869, not long after the golden spike is driven into the rails at Promontory Summit, a mother and her two children climb aboard the Transcontinental Railroad, leaving behind their old life in Omaha for a new one in California, where Papa awaits. Floca (Moonshot) chronicles their journey from multiple perspectives: documentarian, poet, historian, tour guide, and irrepressible railroad geek. With the rhythmic, verselike text that’s become his signature; expressive typography; and handsome, detailed watercolor, ink, and gouache paintings, he celebrates the majestic (the passing western landscape), the marvelous (the engineering and sheer manpower required to keep the engine safely on its course), and the mundane, from the primitiveness of the toilets to the iffiness of depot food (“If the chicken/ tastes like prairie dog,/ don’t ask why”). It’s a magisterial work (even the endpapers command close reading), but always approachable in its artistry and erudition. And readers will come away understanding that the railroad wasn’t just about getting a group of passengers from Point A to Point B; it carried an entire nation into a new, more rapid world.”

"
Talk about a youth librarian’s dream come true: a big new book about those ever-popular trains from a bona fide picture-book-nonfiction all-star. Striking cinematic endpapers lay the groundwork, describing the creation of the Transcontinental Railroad in the 1860s. Then, in a sort of historical-fiction-meets-travelogue narrative, Floca zeroes in on one family’s journey from Omaha to San Francisco. Floca excels at juxtaposing sweeping panoramas with intimate, slice-of-life moments: here a widescreen shot of the train chugging across the Great Plains; later a vignette at a “dollar for dinner” hash house (“If the chicken tastes like prairie dog, don’t ask why,” cautions the narrator). Varied font sizes and styles on the large pages beautifully capture the onomatopoeia (“Hisssssssss”; “huff huff huff”; “chug-chug chug-chug chug-chug”) of the train and the feel of the Old West. One spread finds the train precariously crossing a trestle (“The train is so heavy, the bridge is so narrow, and rickety rickety rickety!”); the concluding ricketys are displayed in an appropriately jarring shadowed font alongside a picture of passengers shaking—and praying—in their seats. Luckily, our family makes it safely to its destination: “the country’s far corners have been pulled together…thanks to the locomotive.” An author’s note and thorough discussion of the sources used are included, and don’t miss the back endpapers—the steam power diagram would make David Macaulay proud."

SEE ALL
See more by Brian Floca
Thank you for signing up, fellow book lover!