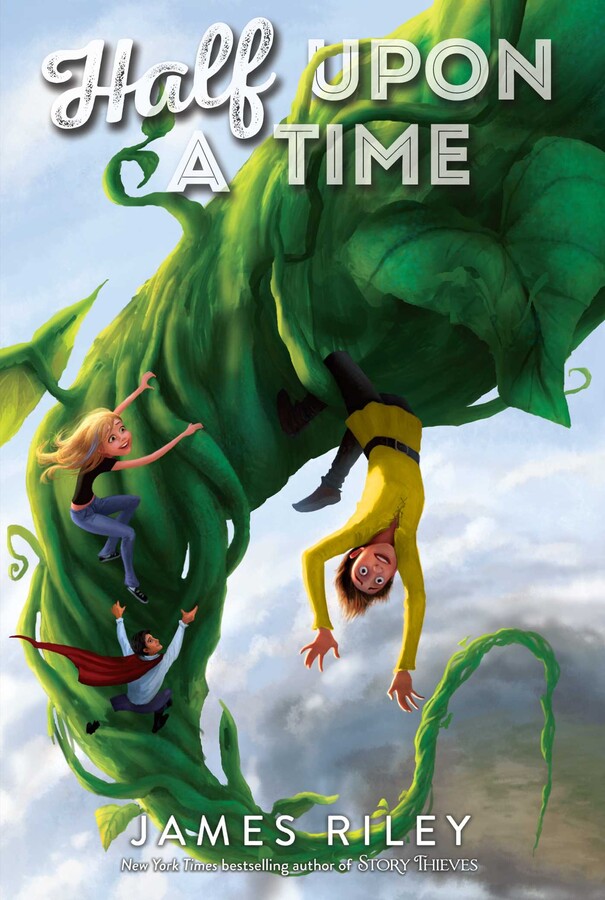 Book #1 of Half Upon a Time
By James Riley
LIST PRICE: AU$ 17.99
PRICE MAY VARY BY RETAILER

In this hilarious fractured fairy tale series from New York Times bestselling author James Riley, Jack, and “punk princess” May must navigate twists and turns unlike anything you’ve seen before!

Jack lives in a fantasy world. Really. He's the son of the infamous Jack who stole the magic beans from the giant, and he's working hard to restore his family's reputation. He finds the perfect opportunity when a “princess” lands in front of him, apparently from the land of Punk, as her Punk Princess sweatshirt implies. May is from our world, and she’s utterly confused to find herself in the midst of the fairy tale characters she has read about. But Jack and May have more in common than they realize—and together, they embark on a hilarious and wild adventre in this highly accessible, modern middle grade fantasy novel.

2. How does the symbolism in the story affect what you’re reading it? For example, if the Wolf King were the Sheep King, how would you expect his character and motives to be different? If the Black Forest were the Orange Forest, would it still be as threatening?

3. At one point when things aren’t going well, May tells Jack, “This isn’t how fairy tales work.” How do fairy tales work? Is it fair to always expect there to be a “happily ever after?” How do you feel when you read or watch a story without a happy ending? Can you name a satisfying story that has an unhappy ending?

5. May tells Jack that “Heroes always know they’re right and always know what to do. They never have any doubts.” Do you believe this? Can you give examples from this book or others to prove, or disprove, this idea? Do you think Jack is a hero? Is Phillip?

6. Jack tells Eudora that he has “some magical stuff” but that he can’t actually do magic. What’s the difference? Do you think it’s better to know how to make magic or have a magical object? Why? Which magical object from the story would you like to command? Would it be more useful to have a knife that can cut anything except people, or a genie that could grant wishes?

7. The Wolf King can transform into human shape. Is this a power you find appealing? Which animal(s) would you like to be able to change into? Can you name other stories with shape-shifters? At which points in the story would it have been helpful for Jack and May to have this power?

8. The Magic Mirror is the powerful object at the center of the story. Discuss the symbolism of mirrors: reflection, seeing clearly, vanity, etc. Why do you think it’s considered bad luck to break a mirror? What do you think it means when Merriweather and the genie are imprisoned in the mirror?

9. May gives up her sarcasm to the imp in exchange for Jack’s freedom. How is her dialogue different without the sarcasm? Do you like her better? Is she less funny? Why is it funny when someone makes a sarcastic comment? Would you be able to talk without your sarcasm? What would you be willing to give up in order to save a friend?

10. Grandpa tells Jack that his curiosity “might just get you into some trouble someday.” Do you think that curiosity is a blessing or a curse? What are the dangers of being too curious?

11. Do you think that someone as evil as the Wicked Queen could really love her granddaughter? Can bad people have good feelings or do good things? Is the opposite true? Do good people sometimes do bad things? Can a truly evil person be reformed? How might that come about?

12. Were you surprised to find out that May’s grandmother was the Wicked Queen? How does it feel to find out someone is not who you thought they were? How does May feel? How might this kind of surprise add depth to the story?

14. The knight tells Jack that the sword has the possibility for evil, but that it “can be used for great good, in the hands of the right person.” How do we know that Jack is the right person, especially when his father was a thief? When Jack says, “We’re going to win because we’re good, decent people trying to accomplish something noble,” do you believe him? Do they deserve to win because they are good and brave?

15. Why do you think the title of the book is Half Upon a Time? Can you suggest some alternate titles? The book’s sequel is called Twice Upon a Time. Does that give you any clues about the plot? What do you think will happen in the next book? Will Jack and May’s relationship get better or worse? Will things they’ve learned in the first book help them do a better job next time?

Guide written by Bobbie Combs, a consultant at We Love Children's Books.

James Riley lives in Virginia. He is the New York Times bestselling author of the Half Upon a Time, Story Thieves, and Revenge of Magic series.

Book #1 of Half Upon a Time
By James Riley
LIST PRICE: AU$ 17.99
PRICE MAY VARY BY RETAILER

More books in this series: Half Upon a Time