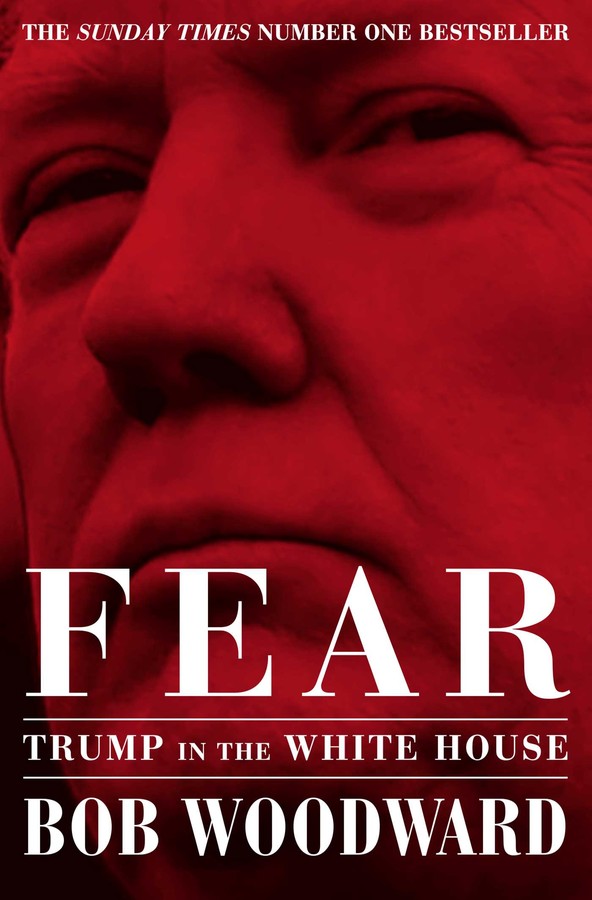 Trump in the White House

THE INSIDE STORY ON PRESIDENT TRUMP, AS ONLY BOB WOODWARD CAN TELL IT.

‘Fear is a meticulously researched account of a White House and a president in financial, legal and personal disorder…essential reading…’ Daily Mail

'The sheer weight of anecdotes depicts a man with no empathy and a pathological capacity for lying.' Financial Times

'Fear depicts a White House awash in dysfunction, where the Lord of the Flies is the closest thing to an owner's manual.' The Guardian

'Though his books are often sensational, he is the opposite of sensationalist . . . He’s Washington's chronicler in chief.' Nick Bryant, BBC

'Horribly fascinating. Strongly recommended. If you can bear it.' Richard Dawkins

'He is the master and I'd trust him over politicians of either party any day of the week.' New York Times

With authoritative reporting honed through eight presidencies from Nixon to Obama, author Bob Woodward reveals in unprecedented detail the harrowing life inside President Donald Trump’s White House and precisely how he makes decisions on major foreign and domestic policies. Woodward draws from hundreds of hours of interviews with firsthand sources, meeting notes, personal diaries, files and documents. The focus is on the explosive debates and the decision-making in the Oval Office, the Situation Room, Air Force One and the White House residence.

Fear is the most intimate portrait of a sitting president ever published during the president’s first years in office.

Bob Woodward is an associate editor at The Washington Post where he has worked for 50 years. He has shared in two Pulitzer Prizes, one for his Watergate coverage and the other for coverage of the 9/11 terrorist attacks. He has authored 20 national bestselling books, 14 of which have been #1 New York Times bestsellers.

'In the worldwide capital of leaks and anonymous dishing that is Washington, secrets can be almost impossible to keep. But somehow over the past 19 months, the fact that America’s most famous investigative journalist was quietly chipping away at a book that delves into the dysfunctions of President Trump’s White House remained largely unknown.'

'Senior officials, acting as lone wolves concerned with preserving their own reputations, spoke to Woodward on their own — with some granting him hours of their time out of a fear of being the last person in the room to offer his or her viewpoint. As one former administration official put it: "He hooked somebody, and that put the fear of God in everyone else." Another former official added: "It’s gonna be killer. Everyone talked with Woodward.”'

'Donald Trump is about to get the Bob Woodward treatment.'

– Robert Gates, former director of the CIA and Secretary of Defense, on Woodward

'I think you’ve always been fair.'

'The sheer weight of anecdotes depicts a man with no empathy and a pathological capacity for lying.'

'Fuelling his narrative is an astonishing cast of rogues, ideologues, self-made millionaires and men in uniform who have spent the past two years in and out of Trump's administration.'

'In Woodward’s meticulous account of office intrigues, the president’s men don’t seem to be trembling with fright. What they mostly feel is contempt for Trump or pity for his ignorance and the “teenage logic” of his obsessively vented grievances.'

'Horribly fascinating. Strongly recommended. If you can bear it.'

'To me the standout message from the book . . . is that the president is a bit clueless, a bit vain, a bit dangerous even; but his people are utterly at sea . . .’

'He is the master and I'd trust him over politicians of either party any day of the week.'

'His work has been factually unassailable . . . In an age of "alternative facts" and corrosive tweets about "fake news", Woodward is truth’s gold standard.'

'Fear depicts a White House awash in dysfunction, where the Lord of the Flies is the closest thing to an owner's manual.'

'I wonder how many journalists have arrived in Washington over the years dreaming of becoming the next Bob Woodward . . . Though his books are often sensational, he is the opposite of sensationalist. He’s diligent, rigorous, fastidious about the facts, and studiously ethical. There’s something almost monastic about his method . . . He’s Washington's chronicler in chief.'

'I’ve been on the receiving end of a Bob Woodward book. There were quotes in it I didn’t like. But never once – never – did I think Woodward made it up. Anonymous sources have looser lips and may take liberties. But Woodward always plays it straight. Someone told it to him.'

‘As special counsel Robert Mueller’s probe into the murky 2016 election that brought Trump to power moves towards a likely-to-be-sensational finale, Fear will help you discuss the inevitable crisis intelligibly.’

Trump in the White House

SEE ALL
See more by Bob Woodward
Thank you for signing up, fellow book lover!