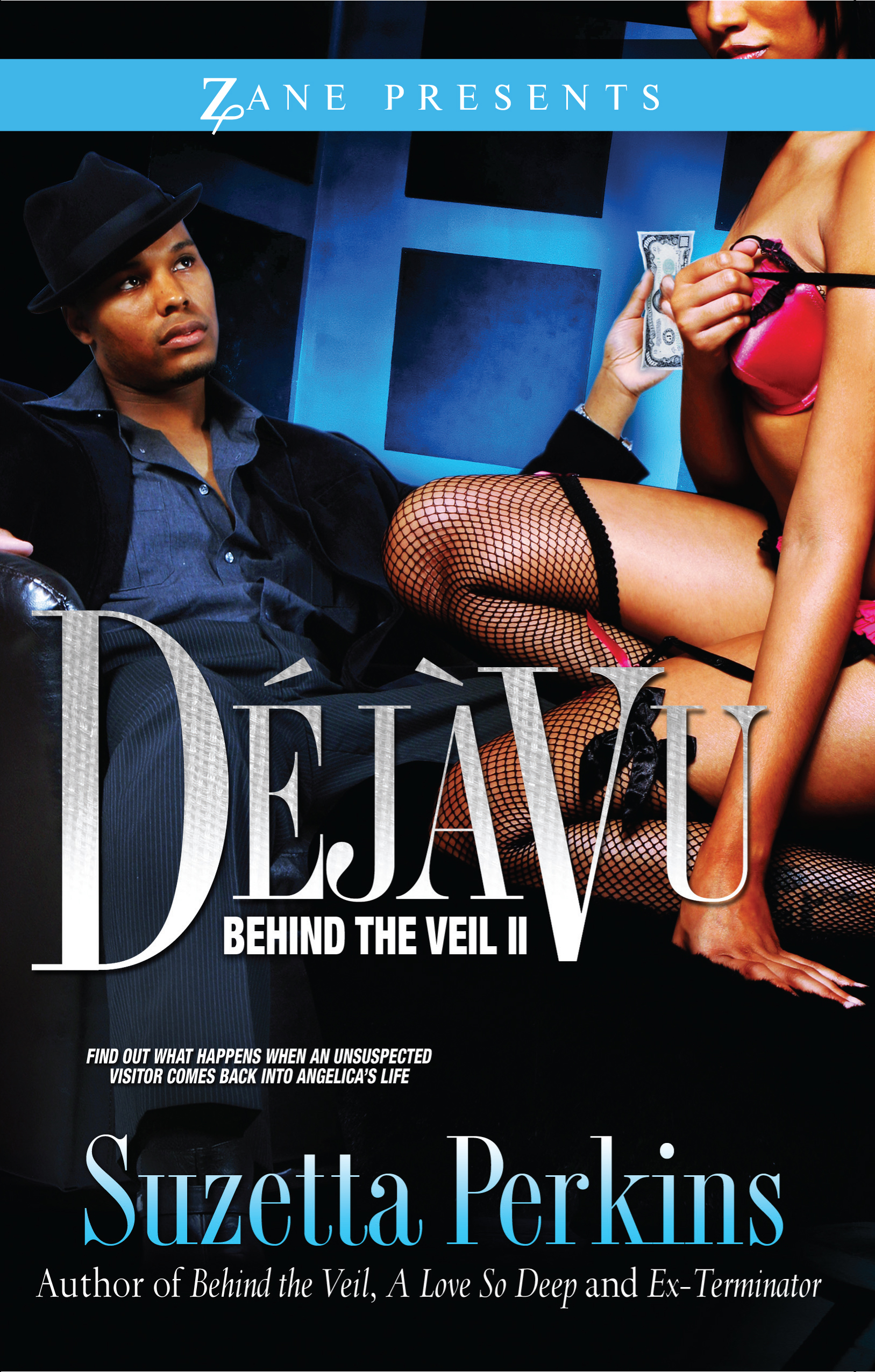 As the former mistress of a notorious crime boss, Angelica Barnes struggles to lead a normal life—but it seems that every avenue she takes is filled with pain, mayhem, and danger.

Angelica Barnes has been released from prison in Raleigh, North Carolina, having served a five-year sentence for being complicit in the illegal activities of her ex-boyfriend, Robert Santiago. She’s a convicted felon and integrating back into society hasn’t been easy—that is, until she accepts an offer she can’t refuse and moves to New York City. But her hopeful dreams of a better life are shattered when she winds up having to fall back on her past life—pole dancing—to make ends meet.

Unbeknownst to Angelica, Santiago is waiting in the shadows, choosing the right moment to reel her back into his grasp. Unable to defend herself, Angelica becomes a prisoner in his posh house in the Hamptons. However, the murders of Angelica’s ex-husband and his cousin have Santiago’s name written all over them, and she realizes she might be his next victim. With the help of a friend, Angelica attempts a daring escape to be free of him forever. But will she ever really be free?

“Hey, hey, hey. What’s all the commotion about?”

Twenty-five occupants of dorm “L” dressed in prison blue moved back from the two inmates who were in an intense shoving match as the plump corrections officer in a starched, slate-blue uniform and curly Afro wig approached the quad, giving everyone a once-over like she owned the joint. The two women continued to push and curse each other until one of them got in a lucky punch and knocked the other to the floor, but then offered a hand to help her up.

The two women stood erect and glared in defiance at the intruder. The inmates were serving five years to life, and Ms. Macy didn’t scare them. In fact, no one liked Ms. Macy. She had a mean attitude. She was Sgt. Macy at the control desk but was Ms. Macy to the inmates. Some speculated that Ms. Macy had endured a tough life…that someone had done her awfully wrong. Others thought Ms. Macy might have served time in prison, too, because she looked like a cold-blooded killer.

Ms. Macy swung her arm out and pierced the air with her long finger, stopping short of one of the inmates’ faces.

“You don’t have to say anything—none of you. Somebody will snitch you out. But I better not catch none of you passing another lick because you’ll be mine, if you get my meaning.”

The twenty-seven women stared at Ms. Macy who had her nose stuck in the air like she hadn’t said a word. She was “Big Bark” to them because they knew Ms. Macy wasn’t going to do anything, that is not if she expected to reap any sexual favors from “her girls” while the others kept quiet.

“Sgt. Macy, please report to the control room immediately,” said the voice over the loudspeaker.

Angelica pushed her nose as high as Ms. Macy’s and nodded her head. The other women crowded around Angelica. Ms. Macy looked on, and then turned abruptly and left the quad.

“Hey, sister. Getting ready to get up out of this joint, huh? Tell that fine brother of yours to do what he can to get me out of this hellhole.”

“I’ll miss you, Angel,” another inmate said. “You are the only sane person around here. I appreciate all you did to protect me from Ms. Macy. I don’t know what will become of me once you’re gone.”

“Don’t worry. Ms. Macy is not going to touch you. If she does, let me know. There are ways to take care of the big, bad wolf.”

“It’s just that the other corrections officers are so nice and Ms. Macy is so full of hate. She makes it her business to see that we suffer anytime she’s around.”

“Like I said, don’t worry about Ms. Macy. My brother is an attorney, and even though he couldn’t save me, Ms. Macy wouldn’t want to face him in a court of law.”

Angelica looked around at the place she had called home for the past five years. Sharing a room with twenty-six other inmates dressed in seasick blue didn’t compare to the cozy home with the moat around it that she had left. Her mansion was a gift to herself made possible by a messy divorce from ex-husband Hamilton Barnes. Hamilton was serving a life sentence at Central Prison a stone’s throw away from where Angelica lived at the North Carolina Correctional Institution for Women. She had been a model prisoner, and now her time here had expired. Angelica was ready to get her release papers, which lay between where she stood and the outside world.

Angelica stopped to hug the few women she had befriended. It had been tough on her, but these women made her time bearable.

She had had very few visitors in her five years at the prison, but what saddened Angelica most was that the one person she thought would come didn’t. Margo Myles was her best friend once, and the cost of betrayal was too high and painful to think about. But Margo had forgiven her, or so Angelica thought. Margo’s name was on the visitor’s list, but not once in the five years Angelica was in prison had Margo shown up and signed in, which seemed to confirm what Angelica didn’t want to believe to be true.

Sgt. Macy eyed Angelica from head to toe. Angelica’s hourglass figure made Sgt. Macy squeeze her hand like she was holding a glass of chocolate milk that she was about to consume. She licked her lips for emphasis, and her breathing intensified every time Angelica took a step.

“I can hook you up on the outside—get a place for you to stay, if you like,” Sgt. Macy whispered, her voice raspy and deep.

“And why would I want you to do that, Ms. Macy?” Angelica said, turning around to look at Ms. Macy with contempt in her eyes and heart.

“Because you don’t have nowhere else to go? I hear your brother had to sell your place to pay your attorney’s fees.”

“What’s it to you?” Angelica barked, her finger pointed at Ms. Macy’s nose. “You need to keep your nose out of other people’s business. I do want to make one thing absolutely clear, though. There is nothing you can do for me.”

Ms. Macy grabbed Angelica’s arm and gripped it tight. “Don’t play with me, girl. You ain’t even all that anyway. You just sugar with some paint on it. Good riddance.”

“Whatever. Now take your hands off me.”

“You’ll never be far. I hear that your ex-husband and boyfriend are at Central Prison.”

Angelica flinched. The last time she saw Jefferson, he was being placed in an ambulance after the shootout at the courthouse. It was also the last time she saw Margo. She had tried to see Hamilton, but his family made sure that she had no access to him.

“Process me out, Ms. Macy. Today is a new chapter in my life. If prison taught me anything, it taught me to be strong, to be tough, and let nobody change who I am, no matter what is dangled in front of me. I am who I am. I’m ready.”

Ms. Macy wrinkled her nose and rolled her eyes. “You’ll be back before Christmas. You can’t survive by yourself. Let’s get you out of here.”

Suzetta Perkins is the author of fourteen books, including Stormy, Free to Love, What’s Love Got to Do With It?, A Love So Deep, In My Rearview Mirror, Silver Bullets, Hollywood Skye, and more. She is the cofounder and president of the Sistahs Book Club. Visit SuzettaPerkins.com to learn more.