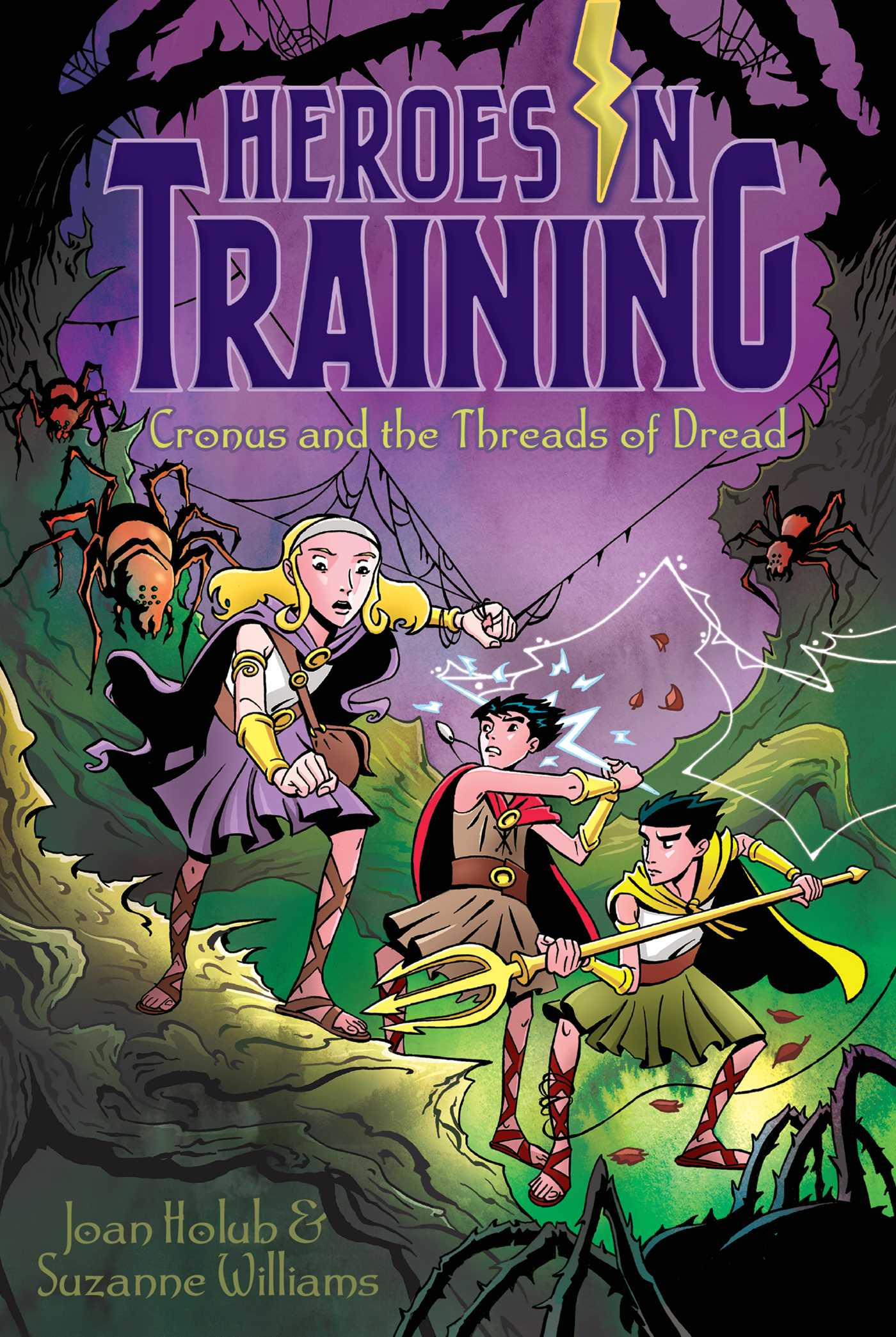 Zeus and the Olympians must deal with monstrous spiders and dangerous webs in this Heroes in Training adventure.

A giant spiderweb in the sky with the words “Surrender Olympians” shows Zeus and his friends that they are in for another battle. Dodging the silky and sticky webs, the Olympians find themselves scattering in all directions to avoid getting caught.

But those dangerous webs actually contain a hidden gem—Athena’s magical object. And the Olympians soon discover that the Threads of Dread might not be as dreadful as they appear…

Nine young Olympians—Zeus, Hera, Poseidon, Hades, Hestia, Demeter, Apollo, Ares, and Athena—stared at the sky in horror. The words appeared in a huge spiderweb that had been spun between the clouds. The web looked like it covered the entire sky!

Suddenly, sticky strands shot down from the clouds. One of them wrapped around Poseidon’s ankle and yanked him away.

Zeus, their leader, grabbed the lightning bolt attached to his belt.

The magical weapon grew until it was as big as Zeus. Weeks before, he had pulled it from a stone in the Temple of Delphi. It had helped him battle all kinds of monsters, beasts, and the Crony army ever since.

Zeus ran after Poseidon as another thread shot down and grabbed Hestia’s ankle. Then another thread grabbed Demeter around her waist, and the next one circled Hera’s arm!

“Help!” they cried as the sticky threads dragged them away.

“What’s happening?” Hades asked, catching up to Zeus as they chased after the four captured Olympians. Apollo, Ares, and Athena followed at their heels.

Craig Phillips has been creating cover art and drawings for books, comics, and magazines for nearly two decades. He is most at home working on tales about myth and magic. His latest book—Giants, Trolls, Witches, Beasts: Ten Tales from the Deep, Dark Woods—is a 200-page graphic novel about just that! It will be in stores in May 2017. When he is not drawing and writing, he likes to swim in the lakes and walk in the forests and mountains of New Zealand. Visit him at CraigPhillips.com.au.