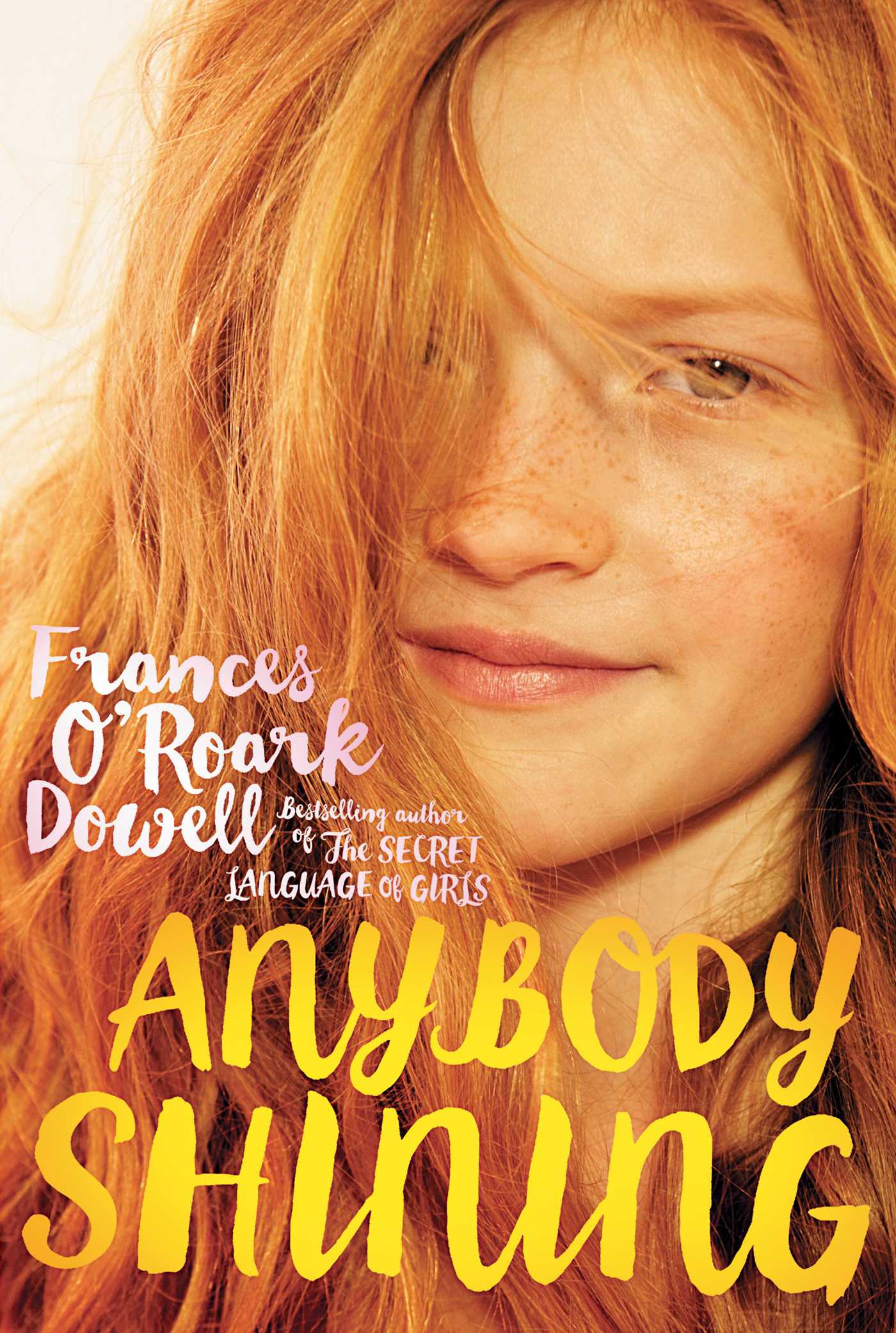 Can one mistake destroy the chance of a lifetime? A girl discovers there are many ways of being true in this magnificent ode to handwritten letters and the shining power of friendship from the author of Dovey Coe, set in the Appalachian mountains of 1920s North Carolina.

One true friend. Someone shining. That’s all twelve-year-old Arie Mae wants. But shining true friends are hard to come by deep in the mountains of western North Carolina, so she sets her sights on a cousin unseen, someone who lives all the way away in the big city of Raleigh, North Carolina. Three unanswered letters later, Arie Mae learns that a group of kids from Baltimore are coming to spend a summer on the mountain.

Arie Mae loves her smudge of a town—she knows there’s nothing finer than Pa’s fiddling and Mama’s apple cake, but she also knows Big City folk might feel differently. How else to explain the song catcher ladies who have descended upon the village in search of “traditional tunes” and their intention to help “save” the townspeople? But when the group from Baltimore arrives, it seems there just might be a gem among them, one shining boy who doesn’t seem to notice Arie Mae wears the same dress every day and prefers to go barefoot. So what if he has a bit of a limp and a rumored heart problem—he also is keen about everything Arie Mae is keen about, and has all the makings of a true friend.

And so what if the boy’s mother warns him not to exert himself? He and Arie Mae have adventures to go on! In between writing letters to her cousin, Arie Mae leads her one shining friend on ghost hunts and bear chases. But it turns out those warnings were for a reason…

“Arie Mae’s openheartedness and yearning for connection make for a deeply poignant story, one with a richly realized setting and cast. As Arie Mae begins to see her life in a new light, Dowell (The Second Life of Abigail Walker) examines the clash between city and country life and what true wealth really means” (Publishers Weekly, starred review).

Arie Mae desperately wants a friend. Living in the North Carolina mountains in the 1920s, she’s in “a sad and sorry way” because she has so few other twelve-year-olds to choose from. Her pencil races down the paper as she writes letters to a cousin she’s never met, hoping that will bring friendship. And when Tom, a boy from Baltimore, arrives with a group to study traditional crafts, he shines with possibilities. They trade stories and share encounters with a black bear and an elusive ghost. Travel back in time to Arie Mae’s colorful life that’s poor in worldly goods but rich in family, neighbors, music, and unexpected friendships.

1. The opening letter tells a lot about Arie Mae and her personality. Discuss what the letter, its details, and its language reveal about her and her life. What does the letter foreshadow about the rest of the story?

2. Friendship is at the center of Anybody Shining. What efforts does Arie Mae take to make a new friend? Discuss what she and Tom do together. Why do they get along so well? Talk about the incident when Tom gets sick on the way to Aunt Jennie’s, and what it shows about him and Arie Mae. What other friendships are important in the story?

3. “Anybody shining, well, they are the one to be my friend,” says Arie Mae when she first meets Tom. Why does she describe him as shining? Why do you think this supplies the title for the book? The ghost of Oza is also shining. How does that connect to the title and to Arie Mae’s view of Tom?

4. Compare Arie Mae and Lucille, and discuss how they get along. How do they each react to Ruth? What does that show about their personalities? Discuss what the sisters have in common with Ruth and how their lives differ from hers.

5. Arie Mae’s family has given Harlan a home and treats him like one of their own. What does it show about her parents? Describe Harlan’s background and Lucille’s role in helping him. What is he like in appearance and personality, and how does he fit into the family?

6. Arie Mae writes of songcatchers and missionaries, “I wonder why there are so many folks who look at us and are unsatisfied by what they see?” What scenes and conversations show what Arie Mae’s family and neighbors think about outsiders coming to help them? Describe their feelings about it, both positive and negative.

7. Describe what you learn about Mama’s sister, Anna. Why did she cut ties with her family? Why did she keep the letters away from Caroline? What made her change her mind?

8. Miss Keller says that the songs on the radio “lack the nobility of our mountain ballads,” Arie Mae reports. Describe the conflict between Arie Mae’s father and the songcatchers. What does Miss Keller mean by the “nobility” of the traditional music? What is Daddy’s attitude toward the traditional and new music? Discuss how the barn dance in Chapter 19 helps resolve their differences.

9. Similarly, the settlement school teaches crafts like weaving cloth and baskets, many of which are rarely practiced in the mountains anymore. Arie Mae says of split-bottom chairs that she’d rather get her chairs from the Sears catalog. Why is the settlement school teaching the crafts? Why do the Baltimore people want to learn them? Explain why Arie Mae and her family might prefer store-bought furniture and clothes.

10. What is the significance of Mama’s apple stack cake? Explain why Arie Mae changes her mind about sharing it at the picnic and how Miss Pittman later reacts to the cake. In what way does that type of cake connect Arie Mae and Caroline?

11. Tom’s tutor says of writing, “It’s all about collecting the details.” Find details in Arie Mae’s letters to Caroline that paint vivid pictures. Choose a person that Arie Mae describes in her letters and identify details that bring them to life for the reader.

12. Near the end, Arie Mae writes to Caroline, “We knowed we was rich, Cousin Caroline, even if we was poor.” What does she mean by this? Discuss ways that her family is rich and ways that they are poor. Consider which outsiders would agree with Arie Mae’s view and why you think that.

13. The story takes place in the mountains of North Carolina in 1924. Elaborate on the setting in terms of time and place, and analyze how important the setting is to the story. What are some indications that life in Baltimore or Raleigh is different from life in Stone Gap?

14. Why did the author choose the device of telling some of the story through letters to Cousin Caroline? Discuss the impact of the letters on the reader, and how the story would be different if it were all a straightforward first person narrative. Talk about Arie Mae’s voice, including her use of colorful language and what it adds to the story.

Have students, working alone or in pairs, create a large Venn diagram to compare and contrast their lives with Arie Mae’s. They can consider topics like food, clothes, communication, and transportation as well as the role of family and friends. Once the diagram is complete, have students compare their results and discuss how much the book revealed about Arie Mae’s life.

When Arie Mae saw she had a letter from Cousin Caroline, she “feared it would be short and polite . . . but that weren’t the case at all.” Have students write the letter that Caroline might have sent, using clues from Arie Mae’s last letter. Have the students share their letters in small groups and note the similarities and differences.

Have students compile the different views expressed in the book about traditional crafts versus store-bought items. Assign each student one side of the issue and have them debate one another about which is best, combining thoughts from the book with their own ideas. After the debates, discuss the topic as a group and examine the validity of both sides.

Arie Mae’s mother sings “Barbry Allen” and her father plays “Cluck Old Hen.” As a class, listen to the versions below of these songs, which were recorded in the 1930s and 1960s. Have students compare the versions and compare the music, including the quality of recordings, to the music they listen to themselves for pleasure.

Arie Mae says that woolly worm stripes can predict winter weather, and Tom shares a weather belief about acorns. As a class, compile a list of weather prediction beliefs, starting with those in the book and ones that students have heard. Have students add to the list through print and digital research, and by asking people they know. They should also look for scientific proof, if any, and share it in a class discussion.

Have students pick a time in Arie Mae’s future and write a narrative about what happens to her. It could be in the near future, such as Cousin Caroline’s visit, or it could be when Arie Mae is an older teen or adult. Their ideas should be grounded in the novel and Arie Mae’s character. Have each student present their narrative to the class and answer questions from their classmates.

Guide written by Kathleen Odean, a former school librarian and Chair of the 2002 Newbery Award Committee. She gives professional development workshops on books for young people and is the author of Great Books for Girls and Great Books about Things Kids Love.

Frances O’Roark Dowell is the bestselling and critically acclaimed author of Dovey Coe, which won the Edgar Award and the William Allen White Award; Where I’d Like to Be; The Secret Language of Girls and its sequels The Kind of Friends We Used to Be and The Sound of Your Voice, Only Really Far Away; Chicken Boy; Shooting the Moon, which was awarded the Christopher Award; the Phineas L. MacGuire series; Falling In; The Second Life of Abigail Walker, which received three starred reviews; Anybody Shining; Ten Miles Past Normal; Trouble the Water; the Sam the Man series; The Class; How to Build a Story; and, most recently, Hazard. She lives with her family in Durham, North Carolina. Connect with Frances online at FrancesDowell.com.