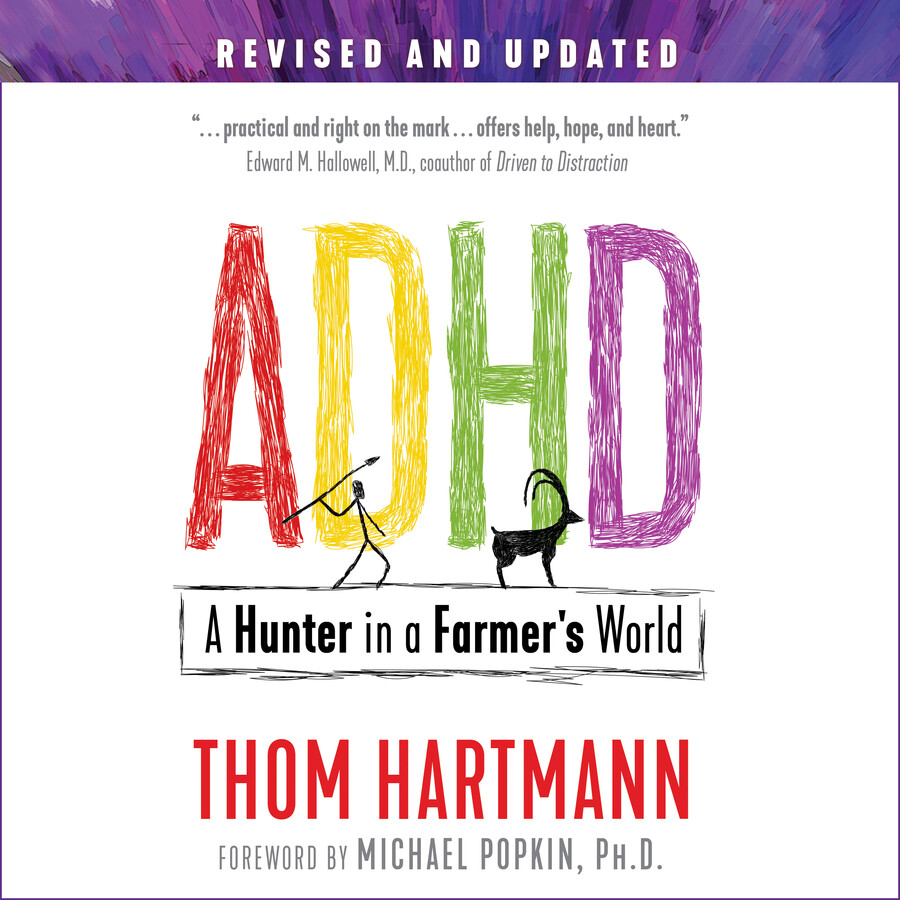 A Hunter in a Farmer’s World

• Explains that people with ADHD are not disordered or dysfunctional, but simply “hunters in a farmer’s world”--possessing a unique mental skill set that would have allowed them to thrive in a hunter-gatherer society

• Offers concrete non-drug methods and practices to help hunters--and their parents, teachers, and managers--embrace their differences, nurture creativity, and find success in school, at work, and at home

• Reveals how some of the world’s most successful people can be labeled as ADHD hunters, including Benjamin Franklin, Thomas Edison, and Andrew Carnegie

With 10 percent of the Western world’s children suspected of having Attention Deficit Disorder, or ADHD, and a growing number of adults self-diagnosing after decades of struggle, the question must be raised: How could Nature make such a “mistake”?

In this updated edition of his groundbreaking classic, Thom Hartmann explains that people with ADHD are not abnormal, disordered, or dysfunctional, but simply “hunters in a farmer’s world.” Often highly creative and single-minded in pursuit of a self-chosen goal, those with ADHD symptoms possess a unique mental skill set that would have allowed them to thrive in a hunter-gatherer society. As hunters, they would have been constantly scanning their environment, looking for food or threats (distractibility); they’d have to act without hesitation (impulsivity); and they’d have to love the high-stimulation and risk-filled environment of the hunting field. With our structured public schools, office workplaces, and factories those who inherit a surplus of “hunter skills” are often left frustrated in a world that doesn’t understand or support them.

As Hartmann shows, by reframing our view of ADHD, we can begin to see it not as a disorder, but as simply a difference and, in some ways, an advantage. He reveals how some of the world’s most successful people can be labeled as ADHD hunters and offers concrete non-drug methods and practices to help hunters--and their parents, teachers, and managers--embrace their differences, nurture creativity, and find success in school, at work, and at home. Providing a supportive “survival” guide to help fine tune your natural skill set, rather than suppress it, Hartmann shows that each mind--whether hunter, farmer, or somewhere in between--has value and great potential waiting to be tapped.

Chapter 3. Hunters in Our Schools and Offices

Prior to the early 1970s, when ADHD was first characterized as a specific disorder, ADHD children and adults were largely treated simply as “bad people”. They were the kids who always got into trouble, the James Deans of the world, the rootless and unsettled adults like Abraham Lincoln’s father, The Lone Ranger, or John Dillinger.

More recent research, however, has demonstrated a high incidence of ADHD among the parents of ADHD children. This discovery caused some psychologists to initially postulate that ADHD was the result of growing up in a dysfunctional family; they suggested that ADHD may follow the same pattern as child or spousal abuse. The dietary-cause advocates contended that children pattern their parent’s eating habits, and this accounts for the generational patterns of ADHD. Other studies suggest that, like Down’s Syndrome or muscular dystrophy, ADHD is a genetic disease, with the A1 variant of the D2 dopamine receptor gene identified by scientists as the leading candidate.

But if ADHD is a genetic disease or an abnormality, it’s a popular one, possibly afflicting as many as 25 million individuals in the United States. With such a wide distribution among our population, is it reasonable to assume that ADHD is simply a quirk? That it’s some sort of an aberration caused by defective genes or child abuse? Where did ADHD come from? The answer is: people with ADHD are the leftover hunters, those whose ancestors evolved and matured thousands of years in the past in hunting societies.

As the human race moved from its earliest ancestors, two basic types of cultures evolved. In the areas that were lush with plant and animal life and had a low human population density, hunters and gatherers predominated. In other parts of the world (particularly Asia), farming or agricultural societies evolved.

Be it pursuing buffalo in North America, hunting deer in Europe, chasing wildebeest in Africa, or picking fish from a stream in Asia, these hunters needed a certain set of physical and mental characteristics to be successful:

• They constantly monitor their environment. Failure to be fully aware of the environment and notice the faint sound might mean a swift and painful death or the difference between a full belly and hunger.

• They can totally throw themselves into the hunt; time is elastic. Another characteristic of a good Hunter is the ability to totally focus on the moment, abandoning all consideration of any other time or place. When the Hunter sees the prey he gives chase simply living totally in that one pure moment. When involved in the hunt, time seems to speed; when not in the hunt, time becomes slow. While a Hunter’s ability to concentrate in general may be low, his ability to utterly throw himself into the hunt at the moment is astonishing.

• They’re flexible, capable of changing strategy on a moment’s notice. If the wild boar vanishes into the brush, and a rabbit appears, the Hunter is off in a new direction. Orderliness is not particularly important to a Hunter, but the abilities to make a quick decision and then act on it are vital.

• They can throw an incredible burst of energy into the hunt, so much so that they often injure themselves or exceed “normal” capabilities, without realizing it until later. Not unlike that quintessential of all Hunters, the lion, they have incredible bursts of energy--but not necessarily a lot of staying power.

• They think visually. Hunters often describe their actions in terms of pictures, rather than words or feelings. They create outlines in their heads of where they’ve been and where they’re going. Hunters often aren’t much interested in abstractions.

• They love the hunt, but are easily bored by mundane tasks, such as having to clean the fish, dress the meat, or fill out the paperwork. Kemmons Wilson, the founder of Holiday Inns, had a group of executives he called Bear Skinners who would take care of the details of “skinning and cleaning” after Wilson had “shot the bear” (negotiated a new hotel site, brought in new financing, opened a new division, etc.).

• They’ll face danger that “normal” individuals would avoid. A wounded boar, or elephant, or bear, can kill you--and many a Hunter has been killed by his would-be prey. If you extend this analogy to warfare, where the Hunters are often the front line infantry or the most aggressive officers, the same is true. Hunters take risks.

• They’re hard on themselves and those around them. When your life depends on split-second decisions, your frustration and impatience threshold necessarily tend to be low. A fellow Hunter who doesn’t get out of the way of a shot, or a soldier who defies orders and smokes on a dark night showing the enemy your position, cannot be tolerated.

People with ADHD Are Descendants of Hunters

It is my hope that this book will help us remove the stigma of “illness” or “deficit” associated with a diagnosis of ADHD and related conditions. A second, and equally important, goal is to provide specific tools to “work around” the dilemma of being an ADHD “Hunter” in a contemporary society that is largely structured for and by non-ADHD “Farmers,” a concept we will explore in detail. The individuals with whom I’ve shared this theory have found it both positive and transformational. This is the spirit in which this book is offered, with the sincere hope that it may help more teachers, psychologists, psychiatrists, and parents to empower and enable rather than label as sick or disabled ADD children and adults.
Thom Hartmann

Thom Hartmann is the host of the nationally and internationally syndicated talkshow The Thom Hartmann Program and the TV show The Big Picture on the Free Speech TV network. He is the award-winning New York Times bestselling author of 24 books, including Attention Deficit Disorder: A Different Perception, ADHD and the Edison Gene, and The Last Hours of Ancient Sunlight, which inspired Leonardo DiCaprio’s film The 11th Hour. A former psychotherapist and founder of the Hunter School, a residential and day school for children with ADHD, he lives in Washington, D.C.

“In this groundbreaking book, Thom Hartmann makes a unique contribution to our understanding of ADHD. In considering ADHD in an evolutionary context, Thom was the first to point out the survival advantages of ADHD in hunter-gatherer societies and also the first to identify the link between ADHD and creativity. As such, Thom will be recognized as a pioneer contributing to the reconceptualization of ADHD from being considered only a ‘disorder’ to being viewed as a ‘mode of thought’ characterized by enhanced flexibility and creativity.”

“It is refreshing to find a book that places ADHD in a framework that does not imply dysfunction. . . . The metaphor of a ‘hunter in a farmer’s world’ fits so many of the ADHD youngsters and adults with whom I have worked.”

“Why are attention deficit hyperactivity disorder and related conditions so common? Could they in some way be advantageous? These questions and some possible answers are woven through this book, providing basic factual information about ADHD with a twist that helps readers recognize the value--sometimes quite special--of people who have it.”

“This book did for our family what years of being in and out of therapy failed to accomplish. It helped us to understand and appreciate each other’s unique way of doing and seeing.”

“A clear and positive view of our remarkable children with practical tips for the parent.”

“I highly recommend this book to parents and educators.”

“This book helped me better understand ADHD and gave me practical strategies on how to deal with these children in the classroom.”

“ADHDers aren’t abnormal; they are uniquely gifted individuals in their own right. Thom Hartmann describes these ideas in a book that belongs in the hands of every educator, counselor, doctor, and parent.”

A Hunter in a Farmer’s World