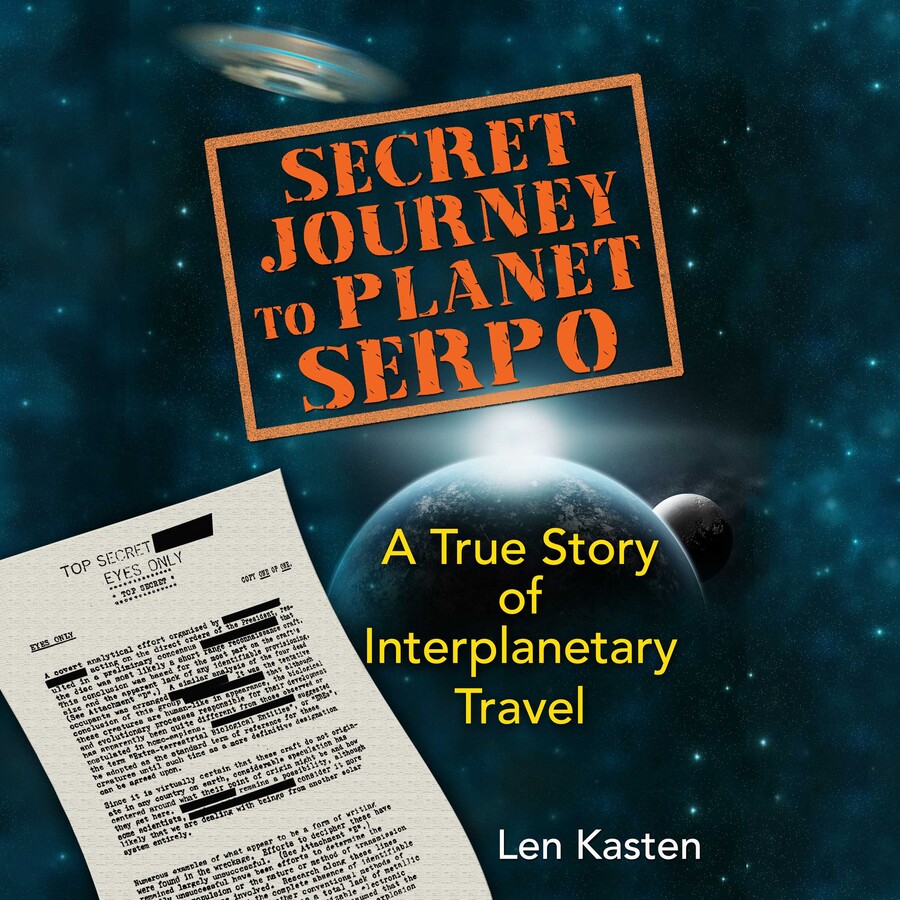 A True Story of Interplanetary Travel

Documents how 12 people, as part of a top-secret U.S. government program, traveled to the planet Serpo and lived there for 13 years

On July 16, 1965, a massive alien spacecraft from the Zeta Reticuli star system landed at the Nevada test site north of Las Vegas. Following a plan set in motion by President Kennedy in 1962, the alien visitors known as the Ebens welcomed 12 astronaut-trained military personnel aboard their craft for the 10-month journey to their home planet, Serpo, 39 light-years away. In November 2005, former and current members of the Defense Intelligence Agency--directed by Kennedy to organize the Serpo exchange program--came forward to reveal the operation, including details from the 3,000-page debriefing of the 7 members of the Serpo team who returned after 13 years on the planet.

Working with the DIA originators of the Serpo project and the diary kept by the expedition’s commanding officer, Len Kasten chronicles the complete journey of these cosmic pioneers, including their remarkable stories of life on an alien planet, superluminal space travel, and advanced knowledge of alien technologies. He reveals how the Ebens presented the U.S. with “The Yellow Book”--a complete history of the universe recorded holographically, allowing the reader to view actual scenes from pre-history to the present. He explains how the Ebens helped us reverse-engineer their antigravity spacecraft and develop technology to solve our planet-wide energy problems--knowledge still classified.

Exposing the truth of human-alien interaction and interplanetary travel, Kasten reveals not only that the Ebens have returned to Earth eight times but also that our government continues to have an ongoing relationship with them--a relationship with the potential to advance the human race into the future.

Following the death of team member 308, the Ebens took control of the body without explanation. Upon arrival, the team commander requested the body of 308 and was told that was not possible. In this diary entry, the commander relates how his attempt to retrieve the body escalated into a tense confrontation.

The Body of Team Member 308
The leader of the Ebens is a larger creature than the others. He is more aggressive and seems to be the boss, similar to me, as the team commander. The leader has requested many things from us, most of which we have provided. However, they took 308’s body--that was without my approval. When we finally learned the location of 308’s body and traveled to the building where it was stored, we were confronted by several Ebens. Ebe1 showed up, and I explained that we wanted the body of 308. Ebe1 told us the body was in storage, and we could not take it. We told Ebe1 that we will take it. The eleven of us walked by the Ebens, numbering six, and walked into the building. They did not attempt to stop us. Once inside, we could not open any of the containers. We did find the container housing 308’s body. We decided to send 899 to our storage area to get some explosives to open the container. Ebe2 showed up with the leader. Ebe2 was extremely polite and asked us to wait. She used the word “please” several times. In fact, she actually used the English word “beg.”

We backed off and I told Ebe2 that we wanted our friend’s body and we wanted to examine it. Ebe2 translated that to the leader. There was a long exchange of words between the two. Finally, Ebe2 told us that the leader would like us to go to another location and speak with another Eben, a doctor, about the body of 308. Ebe2 explained that everything we wanted to know about 308’s body would be explained to us by the doctor. I told Ebe2 that I would leave 899 and 754 here to guard the body. Ebe2 translated that to the leader. Again, there was a long, drawn-out exchange of words. Finally, Ebe2 stated that the leader would like all of us to leave this building and go to visit with the doctor. I told Ebe2, no, I would not leave the body of 308. I felt that this was going to be a confrontation. I told 518 and 420 to go back, obtain our handguns and come back ASAP. I was not going to allow the Ebens to countermand my decisions. When Ebe2 heard this, she told me to wait and placed her hand against my chest. I told her to translate that to the leader. Again, there were several minutes of word exchanges between the two. Ebe2 then stated that the leader would bring the doctor here. Ebe2 asked me to please don’t send your men for guns. Guns are not needed, we can settle this without guns. Please don’t. I told Ebe2 that we would not get the guns but we would not leave until we saw 308’s body.

About 20 minutes later, three Ebens showed up inside this building. One of the Ebens identified himself as a doctor. This doctor told us that 308’s body was not inside the container. The Ebens have done experiments with 308’s body, because they considered it an honor to have such a specimen to work with. The doctor told us they have used 308’s body to create a type of cloned human being. I stopped the doctor at this point. I told the doctor that the body of my teammate was the property of the United States of America, planet Earth. The body did not belong to the Ebens, and I did not authorize any experiments on the body of 308. I explained that humans consider a body to be religious. I demanded to see the body. This doctor explained the body was gone and that all the blood and organs were taken out and used to clone other beings. The word “beings” really scared me and the others. 899 became extremely angry. He called the doctor curse names. I ordered 899 to be quiet. I then told 203 to take 899 out of the building. I realized this matter could really blossom into a major incident. I could not allow that to happen. There were just eleven of us and we realized that if the Ebens wanted to imprison us or kill us, they could do it very easily. But I didn’t think the Ebens would resort to such behavior. I was not going to allow this incident to advance into something worse. I realized there wasn’t much we could do about what the Ebens have done with 308’s body.

Ebe2 looked upset. Ebe2 told me that everyone should be nice; she repeated the word “nice” many times. Ebe2 did not want this matter to escalate. I felt sorry for Ebe2. She was trying to mediate the matter. 203 suggested we return to our living quarters and have a team meeting. I told the leader that I did not want any further experiments with whatever is left of 308’s body. I pointed my finger toward the leader’s face. Ebe2 translated. Ebe2 then told me the leader was concerned that we were upset and promised that nothing further would happen. I thanked Ebe2 and had her relay that to the leader. We returned to our huts. Everyone was upset, especially 899. I told each member to calm down. We did not come forty light-years to start a war with the Ebens. A war we could not win. We have to realize our situation and act accordingly. I ordered each member to accept the facts about 308’s body.
Len Kasten

Len Kasten is a UFO researcher and freelance writer. He intensively studied the Edgar Cayce Readings at the A.R.E. in Virginia Beach and has been a lifelong devotee of astrology and theosophy. He is a former member of the National Investigations Committee on Aerial Phenomena (NICAP) and the Mutual UFO Network (MUFON), and he is the president of the American Philosopher Society. He has been a feature writer, with more than 50 published articles, for Atlantis Rising magazine. He lives in Casa Grande, Arizona.

“I cannot overemphasize the importance of this book. Kasten has cast the bright light of scholarship on a subject that cries for understanding and will change our world and everything that we have come to believe about ourselves and our place in the universe. The shocking truth is, we are not alone and have never been alone.”

“Len Kasten’s work is abundant ad infinitum with similar and truthful mind bending revelations known only to insiders; this is a monumental accomplishment. No Ufology’s library is complete without Secret Journey to Planet Serpo. The book is a masterpiece!! Rating: 5 Stars all the way.”

“Secret Journey to Planet Serpo was a ‘mind-blower’ for me. A well-written, easy read, with numerous b&w illustrations and 27 colour plates, I think it will test your powers for discerning its credibility and make you begin to wonder what else of monumental importance is being withheld from the citizens of earth.”

A True Story of Interplanetary Travel