Why did you choose to write a novel about Marie Curie set in two timelines, a real and an alternate one?
I knew I wanted to write a novel about Marie Curie and call it Half Life for a year before I figured out exactly what story I wanted to tell. After two false starts, I kept coming back to one detail about Marie’s life that fascinated me most of all: the fact that she had been engaged to Kazimierz Zorawski as a young woman in Poland, and that the only reason she didn’t marry him was because his mother thought she wasn’t good enough for him. So much about this intrigued me! There was the fact that this amazing, brilliant woman, who would later go on to change the course of science and win two Nobel Prizes, was deemed not good enough as a young poor woman in Poland. And then I read that in his later years, Kazimierz would sit in Warsaw and stare at a statue of her, erected after her death. All those years later, did he still regret not marrying her? But what if he had married her? Her life would’ve turned out totally differently if she’d never moved to Paris to get her education or met Pierre.
One of my favorite movies is Sliding Doors, and I’ve always been fascinated by that concept. How would life have turned out differently with one different choice? The train we missed, the job we didn’t take, the person we didn’t date or marry. I imagined that but on an even larger scale for Marie Curie. What if Marie Curie hadn’t ever become . . . Marie Curie? I was fascinated by the way one choice would not only affect her and her family on a small personal scale but also how it would affect the course of science and history and the world in ways both good and bad.
But the real Marie Curie also had an amazing life filled with personal triumphs and tragedies, and I wanted to delve into that too. So I decided to set her real story side by side with the fictional Marya’s.

What was the most challenging part of telling a story in two timelines, one real and one fictional?
There were so many challenging things! One big one was keeping the two timelines straight and remembering which characters lived (or died) in each. But also it was a challenge to remember how each character was slightly different in each timeline depending on the circumstances. For instance, Pierre Curie in Marie’s timeline is never the same man as Pierre Curie in Marya’s, so I always needed to remember those nuances and keep them straight as I wrote.
Marie’s real life was so fascinating, and filled with so many highs and lows, that it was a challenge as well to stay true to and capture that while also trying to pace the story and make this work as a novel.
But it was Marya’s storyline—the fictional story—that was my biggest challenge of all. I struggled awhile with the right ending for her and with figuring out a way to ultimately make science important in her story, even if it was on a smaller scale.

What was your favorite part of writing this novel? Least favorite?
My favorite part of writing this book was figuring out the ways scenes could echo in both women’s lives but could mean entirely different things. I loved putting Marya and Marie in the same places (in Sweden, for instance, with Pierre and the swans) but deciding how those exact scenes would play out differently due to the differing circumstances. It felt like a really fun puzzle that I was constantly solving and re-solving as I wrote the first draft.
I also loved thinking about all the things Marie might have wanted to change in her own life and giving her the power to do that in Marya’s storyline. She manages to alter the course of her niece’s and nephew’s lives and she stops Pierre from walking in front of a carriage, and her fictional relationship with her musical daughter is much different than the one based on her real-life relationship.
My least favorite part was working on the scenes based on Marie’s life that were marred by tragedy, and there were a lot of them—Pierre’s death and the fallout from her affair and the death of her nephew and niece. I came to have a real fondness and respect for Marie and all the many obstacles she overcame to achieve what she did. So it was emotionally draining to keep reimagining and writing these terrible things that actually happened to her. But then it was inspiring, too, to reimagine the ways she always managed to persevere.

You’re not a scientist, so what was it like to write about a woman whose entire life was science?
I still get a knot in my stomach when I think about my high school chemistry class, so it was admittedly a little daunting when I first considered writing about a woman who won a Nobel Prize in chemistry. But even though this novel is about a scientist, I think, at its heart, it’s really about a woman struggling and pushing to be the very best in a man’s world. I don’t see Half Life as being about science as much as I see it being about gender and class and what it means to achieve as a woman when everything is stacked against you. These things are very relatable to me! That said, I really tried to do a lot of research on the science aspects of the story and hopefully got them right.

What’s something that surprised you while writing this novel?
The most surprising things were details I learned about Marie Curie’s life before I decided to write the novel. I knew that she and Pierre won a Nobel Prize for discovering radium. But the details of her personal life really astounded me. The idea that she almost married Kazimierz in Poland, of course, was surprising. But I had no idea that Pierre died fairly young and so tragically or how that would go on to shape the course of the rest of her life. I was also captivated and surprised by her sisters, and her daughters, and the amazing things they also achieved.

Which character do you relate to most?
I relate to Marya more than Marie on a personal level. Her life is quieter and focused on her family. And even though she has this burning desire to learn and make the world better, she also has this overwhelming connection to her daughter.
But my favorite character in the novel is Pierre Curie, the brilliant dreamer with his head in the clouds. I loved writing him in both timelines, and I was so sad when he died in Marie’s story. I loved that I got to keep him alive in Marya’s story and write him becoming an old man.

This novel is a departure from your last two World War II–era novels. Why did you take that leap?
In all of my novels I’m always drawn to writing stories about strong women who do extraordinary things, and so writing about Marie Curie didn’t feel at all like a departure for me in that regard. I also have a penchant for telling stories that ask “What if?” And Half Life fits with that theme too. The backdrop and setting for this novel are very much different from my previous ones, but I found myself exploring the themes I come back to time and again: motherhood and sisterhood and what it means to be a woman and face adversity.

What are you working on next?
My next novel is called Beautiful Little Fools and will be out in 2022. It’s a reimagining of The Great Gatsby from the women’s points of view. It takes place before, during, and after the original novel and centers on the lives of the women and a detective investigating Jay Gatsby’s death. 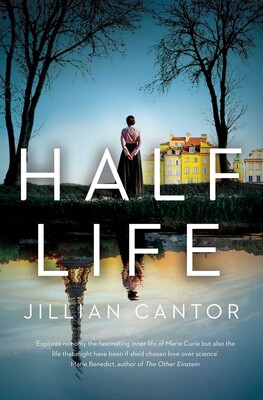 Half Life
By Jillian Cantor

A brilliant sliding-doors reimagining of the passionate life of the first woman to win a Nobel Prize – and the life Marie Curie might have led if she had chosen love over science.

Poland, 1891. Marie Curie (then Marya Sklodowska) was engaged to a budding mathematician, Kazimierz Zorawski. But when his mother insisted Marya was not good enough, he broke off the engagement. A heartbroken Marya left Poland for Paris to study chemistry and physics at the Sorbonne. Marie would go on to change the course of science forever and become the first woman to win a Nobel Prize.

But what if Marie had made a different choice?

What if she had stayed in Poland, married Kazimierz, and never attended the Sorbonne or discovered radium? What if Marie had chosen her first love and a life of domesticity, still ravenous for knowledge in Russian Poland where education for women was restricted, instead of studying science in Paris and meeting Pierre Curie?

Seamlessly entwining the lives of Marya and Marie, Half Life is a powerful story of love and friendship, motherhood and sisterhood, fame and anonymity – and a woman destined to change the world.

Make Half Life your next book club pick with our ready-to-go questions.