1-2 Hours
Serves 9
Inherently sharp, rhubarb is one of my favourite ingredients for its pleasing ability to temper sweetness. As the top layer in this upside-down cake, it not only excels in this role but its pretty pink colour makes for a beautiful presentation. You don’t have to make this ‘parquetry’ design but it’s simpler than it looks and allows you to cut the cake in satisfyingly neat squares.
240g rhubarb stalks
100g castor sugar
1 tsp anise seeds, toasted and roughly crushed
seeds from ½ vanilla bean
Cake mix
120g (3⁄4 cup) self-raising flour
¼ tsp salt
140g almond meal
250g unsalted butter, cubed, at room temperature
250g castor sugar
4 eggs, at room temperature
½ tsp best-quality almond extract (or 1 tsp vanilla extract)
1.  Grease and line the base and sides of a 20cm square cake tin with baking paper and set aside.
2. Wash and dry the rhubarb, trimming away any green (poisonous!) leaves. If stalks are thicker than 2cm, halve by cutting lengthwise. If making the grid pattern, cut the stalks into batons, each about 6.5cm long.
3. Place the sugar in a bowl and rub in the anise and vanilla seeds with your fingers. Toss the rhubarb pieces through the sugar and macerate for 5 minutes.
4. Start by laying the rhubarb batons horizontally in one corner of the lined tin, making sure there are no visible gaps between the stalks. Moving across the tin, lay the next batch of batons vertically, followed again by horizontally. Keep repeating until the rhubarb fills the tin. By laying the stalks in this manner, you’ll create a series of squares. Sprinkle any of the remaining vanilla anise sugar over the rhubarb and set the tin aside.
5. Preheat oven to 180°C (160°C fan-forced).
6. For the cake, sift the flour and salt together in a small bowl. Add the almond meal, stir to combine, then set aside. Place the butter and sugar in the bowl of an electric mixer fitted with the paddle attachment and beat on medium speed for 2 minutes or until light and fluffy. Stop the mixer a couple of times to scrape down the bowl with a rubber spatula to ensure it is evenly mixed.
7. Add the eggs, one at a time, and beat until combined, then spoon in half the flour mixture. Beat on low speed until just incorporated, about 10 seconds, then remove the bowl from the machine and fold in the remaining dry ingredients and almond (or vanilla) extract with a rubber spatula.
8. Spoon the batter carefully over the rhubarb and spread with a spatula to form an even layer. Place on the middle rack and bake for 60–70 minutes or until a skewer inserted into the middle of the cake comes out clean. Remove cake from the oven and allow to cool for 1 hour before turning out onto a serving plate. The cake is best served on the day it is made, but may be kept in a cool place for up to 2 days. 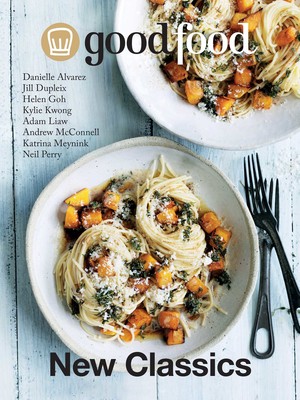 The much-requested second collection of best-loved and requested recipes from the stellar Good Food team. More than 100 classic recipes are given a fresh, extra delicious twist by eight ​of Australia’s ​best-loved chefs.​

Created for home cooks, these are inspirational, easy weeknight dinners, along with plenty of delicious dishes to impress your guests.​