#BOOKTOK 101: Your guide to a major new force in publishing 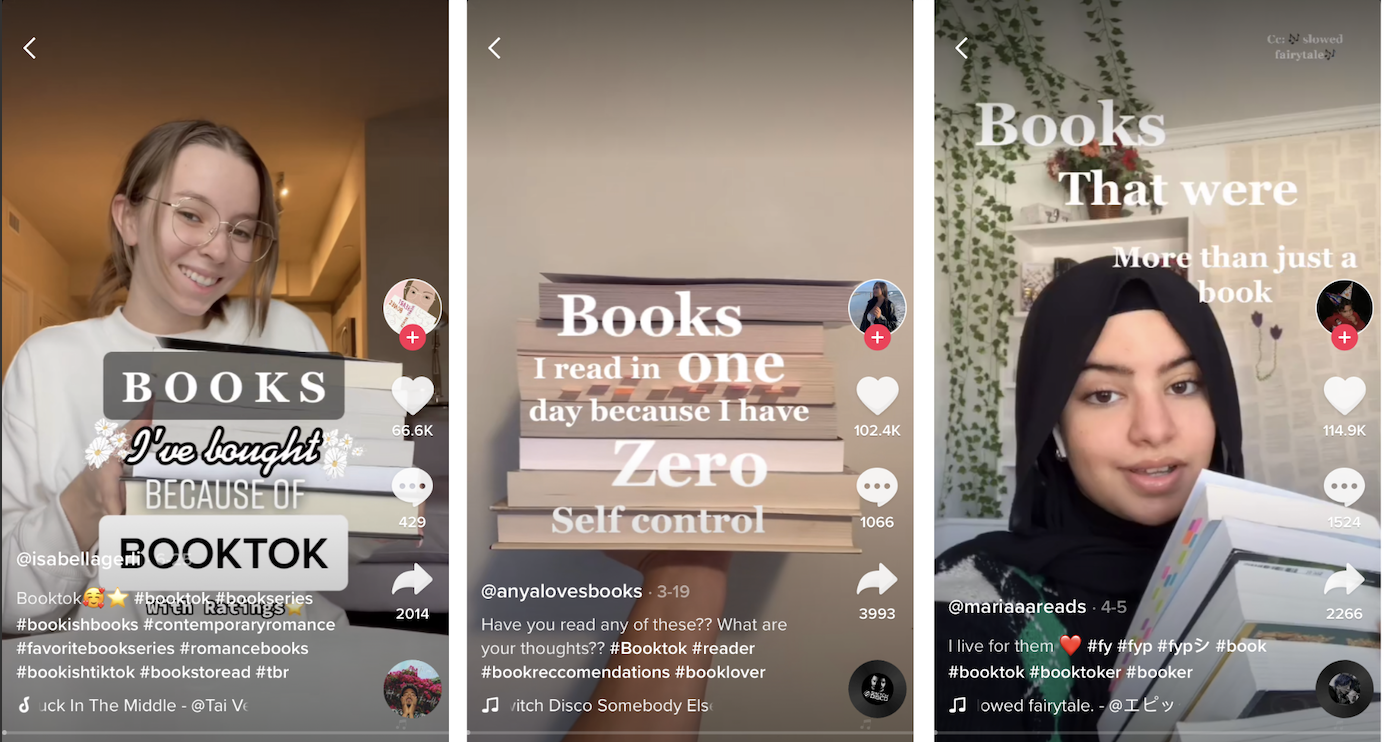 Since TikTok launched in 2016, the video sharing app has given rise to countless viral dances, revived the haunting art of the sea shanty and incited a national feta shortage in Finland due to an insanely popular pasta recipe. Currently, against all sound medical advice, it's encouraging blocked-up users to stuff cloves of garlic up their nostrils.

But it's also selling thousands and thousands of books each week.

As Goodreads, Instagram and YouTube once fundamentally altered the way people read, review and recommend books, TikTok is the latest social media phenomenon to exert a seriously powerful influence on the bestseller lists.

THE BASICS OF TIKTOK: TREND-DRIVEN POWER

TikTok’s popularity has skyrocketed in the past year and a half. There were 1.6 million Australian monthly users in pre-lockdown 2020. Now, there are 6.8 million monthly users. Almost 95 per cent of people logging on to TikTok are Millennials and Gen Zs, and women between the ages of 12 and 25 are the most enthusiastic users.

On average, TikTokkers spend an hour and twenty minutes each day on the app.

TikTok hosts user-generated videos that are generally under a minute long. While other social media platforms such as Instagram only show users content posted by accounts that they follow, most TikTokkers scroll the feed on their ‘For You’ page, where what they watch is dictated by TikTok’s all-powerful algorithm.

The algorithm curates the For You page based on what users view, like, share and comment on, creating a feed tailored to a user’s interests. For this reason, no two TikTok feeds are ever the same.

It’s an incredibly trend-driven platform. Features encourage users to create their own videos, whether they’re filming a video from scratch or replying, remixing or ‘duetting’ an existing TikTok. About a third of users actively contribute their own content to the platform, so once TikTokkers pick up a trend, thousands of videos can be created and posted in response within hours.

It’s this trend-driven virality that sends books soaring to the top of the bestseller lists.

As millions of mystically inclined TikTokkers unite under #WitchTok, readers of the world create and post content using the extremely popular #BookTok hashtag. Videos posted with the hashtag have close to 14 billion views all up.

When a recommendation or reader reaction to a book goes viral on #BookTok, other users are prompted to post their own content about the book, leading to more views and reactions, and the title in question starts flying. In many cases books published years ago are getting swept up by the #BookTok machine and promptly cleared off shelves.

“It become[s] a trend that other users want to jump on and start creating their own content,” Simon & Schuster US marketing and publicity manager Olivia Horrox told The Guardian. “Like the ice-bucket challenge that used to be around on Facebook, these TikTok trends become a challenge in the same way, and you don’t want to miss out on the zeitgeist, so you get the book that everyone’s talking about.”

Users say that between five and 10 titles tend to be discussed by the thriving #BookTok community at any one time. They’re usually YA, fantasy and romance books, but the influence of #BookTok is expanding into other genres, like crime, contemporary fiction and the classics.

A trend that has proved especially impactful involves readers filming themselves as they finish a particularly heartbreaking read. This often involves violent sobbing.

There’s something about watching the raw reaction of a red-eyed reader wailing into the final pages of their latest book that hits a little more powerfully than a star rating on Goodreads. 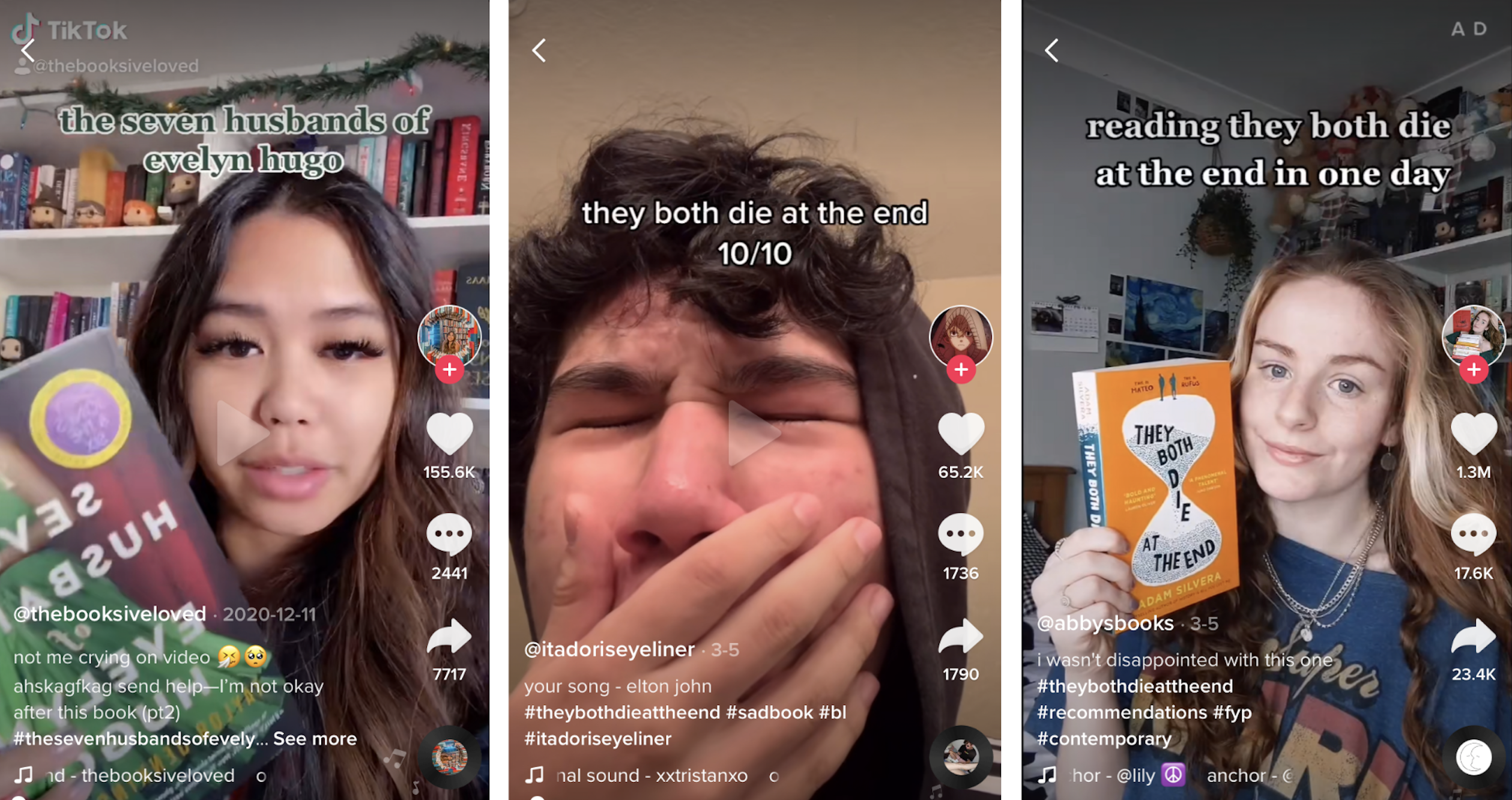 Adam Silvera is an American YA author and the unwitting king of #BookTok.

Thanks to TikTok users picking up his 2017 queer romance novel They Both Die at the End and posting reactions that range from the tearful to the openly weeping, sales of the book began to climb in November 2020 before the trend exploded in February 2021, with a massive sales spike to boot. Videos posted with the #theybothdieattheend hashtag have been watched 41 million times and counting.

In the US, the YA market is up almost 50 per cent in the first half of 2021 thanks to #BookTok, and They Both Die at the End was the bestselling title with 300,000 copies sold. In Australia, more than 25,000 copies have been sold since #BookTok discovered the title. It’s topped the Australian YA charts six times this year and has held its spot in the Top 5 since March.

#BookTok driven sales of They Both Die at the End began to climb in November 2020 before huge sales spikes in February and March 2021. (Source: Nielsen Bookscan)

Other backlist titles supercharged by #BookTok include Colleen Hoover’s heartbreaking love story It Ends With Us, which has seen nearly 5000 copies sold since May despite being published five years ago (also helped along by the Shameless Podcast book club), and The Seven Husbands of Evelyn Hugo by Taylor Jenkins Reid, a 2017 title which has clocked 20 million views on its corresponding TikTok hashtags. Both of these authors have seen a significant surge in sales for their other titles too.

Books by Christina Lauren (the psuedonym of writing partners Christina Hobbs and Lauren Billings) are also enjoying a sales lift as TikTokkers read and rank Lauren's entire catalogue, in some cases awarding a 'spice rating' in the form of chilli emojis depending on how racy they find each book.

But #BookTok doesn’t just unearth backlist gems. In the US the #BookTok juggernaut fixated on Tracy Deonn’s 2020 YA fantasy Legendborn, delivering 6.5 million views on videos about the book so far and setting up the debut author for future success with the series.

The rise of #BookTok is an exciting and unpredictable development in how people find new books to connect with – and a true reminder that when it comes to publishing, readers hold the ultimate power.