1. Wagadhaany’s father, Yarri, warns Henry Bradley when he is building his house that the flat land by the river isn’t suitable because it’s a flood plain. Did you notice any other instances where Wiradyuri knowledge of the land was disregarded? Did you notice any examples of when Wiradyuri knowledge of the land was capitalised on, to the benefit of White people?

2. When the river floods, many families including the Bradleys rely on sandbags to control the water. Did you notice other instances in the book where characters act as if nature can be tamed?

3. Wagadhaany treasures the headband her mother gives her, and she wears it at various times throughout the novel. What other things does Wagadhaany do to try to feel closer to her family?

4. How is the idea of family represented throughout the novel? What does family mean to you?

5. What is the significance of Wagadhaany’s name – who she reveals it to, what she answers to, David and James’s attempts to pronounce it, or their deliberate dismissal of the true way it’s pronounced?

6. What are the different kind of friendships Wagadhaany has, for example with her cousins in Gundagai, with Louisa, with Yiray, and with the other women at the camp in Wagga Wagga? What does each friendship mean to her? Do you have friendships that mean different things to you?

7. Yindyamarra is a stockman. Looking at the language he uses to speak about it, what do you think his feelings might be about his work, especially in terms of the damage stock does to the land?

8. Louisa displays varying levels of self-awareness throughout the novel. What do you think of the difference between what she says and how she acts?

9. What is the significance of food in the novel? You might like to think about cooking food, sharing food, buying food, finding food and a lack of food.

10. Yiray tells us that many of the women working at the Hansen homestead have been sexually abused. Wagadhaany tells us that David often makes her feel uncomfortable. What do you think holds David back?

11. How did the events in Wagadhaany’s life shape her identity? What events have shaped your identity?

12. In light of the Masters and Servants Act, what do you think drove Wagadhaany and Yindyamarra to take such risks, to go back to Gundagai?

13. How do you think Wagadhaany might have felt when she discovered that her family had been forced out of Gundagai and onto a mission?

14. What is the significance of the river? 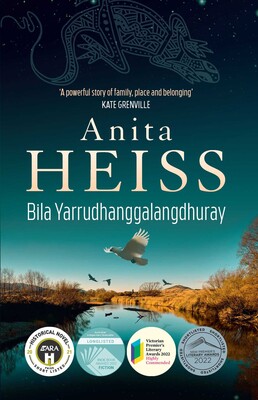 Set on timeless Wiradyuri country, where the life-giving waters of the rivers can make or break dreams, and based on devastating true events, Bila Yarrudhanggalangdhuray (River of Dreams) is an epic story of love, loss and belonging.