Body Count
Stories of heroism, heartbreak and hope from the front lines of the climate crisis 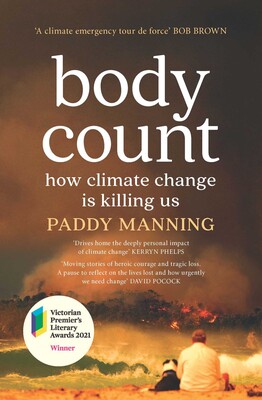 How climate change is killing us

Suddenly, when the country caught fire, people realised what the government has not: that climate change is killing us.

But climate deaths didn’t start in 2019. Medical officers have been warning of a health emergency as temperatures rise for years, and for at least a decade Australians have been dying from the plagues of climate change – from heat, flood, disease, smoke. And now, pandemic.

In this compassionate book, Paddy Manning revisits some headline events which might have faded in our memory – the Brisbane Floods of 2011; Melbourne’s thunderstorm asthma fatalities of 2016 – and brings to our attention less well-publicised killers: the soil-borne diseases that amplify after a flood; the fact that heat itself has killed more people than all other catastrophes put together. In each case, he has interviewed scientists to explore the link to climate change and asks how – indeed, whether – we can better prepare ourselves in the future.

Most importantly, Manning has spoken to survivors and the families of victims, creating a monument to those we have already lost. Donna Rice and her 13-year-old son Jordan. Alison Tenner. The Buchanan family. These are stories of humans at their most vulnerable, and also often at their best. In extremis, people often act to save their loved ones above themselves. As Body Count shows, we are now all in extremis, and it is time to act.

Respected journalist Paddy Manning tells these stories of tragedy and loss, heroism and resilience, in a book that is both monument and warning.

Paddy Manning: The time to act on climate is now