Behind the Book: Beautiful Little Fools

One of the earliest books that made me want to become a writer was The Great Gatsby. I read it (and fell in love) for the first time in a high school English class, then again a few years later in a college class for my English major. I kept my college copy and moved it across the country with me for grad school, where I reread it a third time for inspiration, in the midst of struggling to write my own first novel in a novel writing seminar. In the twenty years since then, that copy has become well-worn, as it has become one of a handful of novels I find myself returning to  read over and over.

What I’ve always loved about The Great Gatsby is the beautiful prose, the way the book is both literary but sizzling with the drama of affairs, murder, and the recklessness of the Roaring 20s. I love that it’s glamorous and atmospheric, dark and eccentric all at once. I love that the characters are often unsympathetic, but there’s still a part me of that wants so much to like them. And most of all, I’m intrigued by the point of view, that Fitzgerald chose the outsider, Nick Carraway, to tell this particular story.

Point of view has always interested me most as a writer, and maybe that’s why I’ve found myself coming back to Gatsby as a reader, again and again. The way different stories unfold differently depending on who tells them is something I’ve considered often in my own work. What happens when we see familiar stories in new ways, from different perspectives? I’ve explored this question in my novels, while also thinking and writing about women’s lives and their unique perspectives. So much so that when I returned again to reread The Great Gatsby a few years ago, I found myself thinking about just this question. What are the women in the novel thinking and feeling?

Everything we know about the women in The Great Gatsby is filtered through the eyes of the narrator Nick Carraway, heavily influenced by his own often glowing perception of the enigmatic Jay Gatsby. But what if it wasn’t? I wondered about Daisy’s and Jordan’s stories, and not just that sultry summer on Long Island, but also in the years leading up to it. And what about the tragic Myrtle and her briefly mentioned sister, Catherine? How different would everything look from these women’s points of view? How would they see Jay Gatsby—and that summer—differently than Nick?

In early January of 2020 I mentioned my curiosity about the women of Gatsby’s world to a few writer friends. One made me promise that I had to write a novel from Daisy’s point of view. Another sent me a message about how her favorite line from The Great Gatsby is the one Daisy says when her daughter is born: “I hope she’ll be a fool, that’s the best thing a girl can be in this world, a beautiful little fool.” A third sent me a news article she’d seen that same morning about the how the copyright for The Great Gatsby was set to expire in January 2021. Suddenly I felt like the universe (and my writer friends) were telling me that this was something I needed to write at this very moment. And I already had a title: Beautiful Little Fools.

I did yet another reread of The Great Gatsby, only this time, I highlighted every line and every detail and every mention of Daisy, Jordan, Catherine, and Myrtle. I constructed a timeline of their lives from 1917–1922, spanning Louisville to France to Chicago to East Egg, spanning Daisy’s first meeting with Jay Gatsby as a teenager to her disastrous marriage to Tom in the years that followed, as well as Jordan’s career and scandal as a golfer, Catherine’s life a single woman in Manhattan and Myrtle’s life in Queens above Wilson’s garage. My own imaginings of these women grew from these small mentions (and this timeline set out) in the original novel. I also decided that my novel would be not just a female take on The Great Gatsby, but also a mystery, in the spirit of Big Little Lies. What if all these women had their own secrets, and they all came to a head that summer of 1922? And what if there was more to Jay Gatsby’s death than Nick Carraway ever would’ve known?

By March, I had excitedly written the first fifty pages and a detailed outline. I had a plan to leisurely spend the next few months delving into the fictional world of these women. Little did I know that the real world was about to shut down, my kids were about to be at home 24–7, and I was going to be worrying about buying toilet paper. I took a break from writing for two weeks. (Remember those days when we thought we would only need two weeks to flatten the curve?) But by April it was clear we were in a worldwide pandemic that wasn’t ending any time soon, and I had Daisy, Jordan, Catherine, and Myrtle paused and waiting for me.

And so there was the stress and worry and homeschooling and figuring out how to use Instacart and curbside pickup, but there was also the glamour and terrible recklessness of Daisy and Tom Buchanan’s marriage, Jordan pushing boundaries as a female golfer, Myrtle being trapped in a loveless marriage and Catherine pushing forward as a suffragette. There were drunken parties in the midst of prohibition, and sober mistakes in a world so unforgiving to women. There was friendship and motherhood, affairs and murder, darkness and eccentricity. Secrets and lies to unravel and reveal.

The week in the beginning of June when my husband and I planned (in pre-pandemic times) to go to Hawaii to celebrate 20 years of marriage, I finished my earliest draft. Instead of the beach in Maui, I was on my back patio, well-worn college copy of The Great Gatsby in my hands, rereading yet again, highlighting details I may have missed that would make it into my revision. A few weeks later when a wildfire broke out in the mountains behind our home and we had to pack up to be prepared to evacuate, my tattered copy of The Great Gatsby went into a box with my most treasured photo albums.

The fire finally burned out, the pandemic raged on. By August I was living in the world’s Covid hotspot, my kids’ school year began remotely, and I dove back in to revise Beautiful Little Fools, debating over the perfect ending. I reread The Great Gatsby one more time and also, at this point, watched every movie adaptation ever made (including my new favorite, a lesser known version with Paul Rudd as Nick Carraway). I found it fascinating to see how each filmmaker in every era re-imagined the world and the women of Gatsby just a little bit differently. They were originally Fitzgerald’s fictional women, but then they were shaped and shifted by the points of view of the filmmakers. While it isn’t a plot point in Gatsby, the hedonistic 1920s were born from the tragedy of the 1918 flu pandemic – the women I was writing about had sprung from such a similar time to the one I was inhabiting. I considered how they had been shaped by my point of view, too, writing them against the backdrop of this century’s pandemic. And I wondered if my joy in bringing them to life, as fully drawn, complex people, who are shaped by the time they lived in, was itself a way for me to rescue this time of my life, to create something beautiful.

Writing fiction has always felt like an escape from the real world for me, but also a way to process my own feelings about whatever is going on in my real life at the time. It’s why I’m drawn to women, mothers, daughters, sisters, wives. I love taking on the roles of my female characters in my head, embodying their voices with my words on the page, but writing about themes that impact my own life too.

In my search for the perfect ending in the final stages of my revision, I realized the story I ultimately wanted to tell was one of women helping women in their darkest moments, of self-preservation, of a fight for survival, and of the importance of home—all things I’d thought about many times in my real life in those long pandemic months. As much as I gave Daisy, Jordan, Catherine, and Myrtle a voice, maybe they gave me one too. 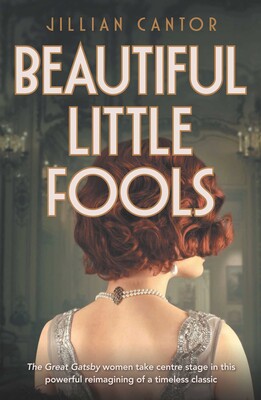 A powerful reimagining of The Great Gatsby from the perspective of the three women whose lives are unravelled by one man’s romantic obsession.