It was September 1973, almost a month before the official opening of the Sydney Opera House by Queen Elizabeth II. I was 11 years old and a child extra (usually called ‘super’ in opera) in The Australian Opera Company’s production of War and Peace.

Like my younger sister, I was a refugee, and our stage directions were to go on with members of the chorus, looking sad, lost and hungry. We wore sack-like costumes and we had smudged dark makeup on our faces, to make us look like we’d been to hell and hadn’t yet made it back. I remember a highlight was that we were given black bread on performance nights to eat on stage. I’d never eaten black bread before. It was so different – I loved it!

In the past, whenever I recalled that first performance, I always thought that I had been pretty cool, calm and collected about being on stage. But I’ve watched myself in a video of that performance recently – Opera Australia made it available to view online – and I’m gazing up overhead at the lights, and all around the set, goggle-eyed.

Someone had advised us not to look at the audience but to focus on the action on stage, to become completely immersed in that world. But I was never very good at doing what I was told and so I did once look out at the audience.

I had thought, because the houselights were down, that I wouldn’t be able to see anyone anyway so I was shocked that I could see people in the front three or four rows. I remember seeing women dressed in very fancy gowns and gorgeous jewellery that winked back at me. I quickly decided it was terrifying to have all those eyes focused on us and from that moment on, I took the advice to simply become part of the world onstage. And what a world it was – of costumes and scenery and makeup and music.

At the end of the scene, I was required to walk all the way across the stage to exit on the Prompt side. One of the most beautiful things I saw in that videoed performance was my dad, in a Russian-style costume, pull me in for a quick hug and a pat on the head as I walked past.

War and Peace has a large cast and as I recall it, we were all on stage for the final curtain call. After the curtains closed, I remember people laughing and hugging and backslapping and just hanging out for what seemed like ages, nobody wanted to leave the stage. It’s that memory that inspired a similar scene in The Understudy.

I was a super in other performances of War and Peace, and in a season of The Magic Flute. I was also a super in Cavalleria Rusticana and wore a beautiful long white dress. But despite the gorgeous gown, I don’t think anything really compared to being in that first performance of War and Peace. To be on that stage, on that night, in our brand-new opera house was, quite simply, magic. 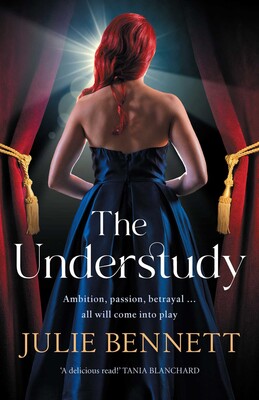 The Understudy
By Julie Bennett

Immersed in the underbelly of the theatre world in the gritty streets of Sydney in 1973, this addictive debut will have you wondering just how dangerous ambition – and love – can be.

It’s opening night. The stage is set, the houselights have dimmed and the handsome male lead is waiting. This is your time. Your chance to prove you are so much more than the understudy.

You have worked so hard and would have done almost anything to get here. But not what they are accusing you of – never that. It’s simply bad luck that Australia’s darling of opera has gone missing, throwing the spotlight on you just as the whole world is watching history in the making.

But the show must go on and it’s all down to you. Take a deep breath and get ready to perform the role of your life.