THE FASCINATING, TRUE STORY OF THE WINTER DRESS

The Winter Dress was inspired by a real shipwreck discovered by a group of amateur divers off the coast of Texel in 2014. Although the divers had known about the wreck for years, accessibility was limited until a big storm blew through the harbour, stripping off the layers of sand and mud. Visibility was so poor they had no idea what they'd found was so valuable until they surfaced. Amongst the many treasures the divers recovered was a silver goblet similar to those crafted by Nuremberg silversmiths in the 1600s and a remarkably preserved silk dress. The dress was quickly identified by the director of the local museum as a particularly unique find since complete historical textiles are rarely, if ever, retrieved from shipwrecks. Seabed conditions are anathema to old and delicate fabric and even very decayed fragments like thick woollen socks or sleeves are rare finds. The dress was displayed for a few weeks on Texel before being moved to an archaeological facility on the mainland for conservation and research. The dress is expected to be placed on permanent display in 2022. Clothing Art: The Visual Culture of Fashion, 1600 - 1914, Aileen Ribeiro

The Winter Dress is a novel about the sacrifices women have always made in order to achieve their ambitions. Although I've chosen to fictionalise aspects of the story (including the identity of the divers and researchers), the island of Texel is an extraordinary character in its own right. I was lucky to visit Texel in May 2019 and I'm very grateful to the local divers and historians for allowing me to interview them. The highlight of the trip was viewing the silk dress at the archaeological facility Huis van Hilde in Castricum, a small town on the Dutch mainland. The Palmwood Wreck is truly a unique discovery, one worthy of every bit of international attention it has received. I recommend reading this article written by Jessamyn Hartcher and published by The New Yorker in 2017 which includes a lot of fascinating detail about Texel including its history as an anchorage and its beach-combing culture. Jessamyn's article really captured my imagination when I first read it a few years after the Palmwood wreck was found and it was the catalyst which set me on the path to researching and writing a novel inspired by the dress's owner. For more information about the initial discovery and theories (now disproven) about who might have worn the dress, check out this article which was published in The Guardian in 2016. 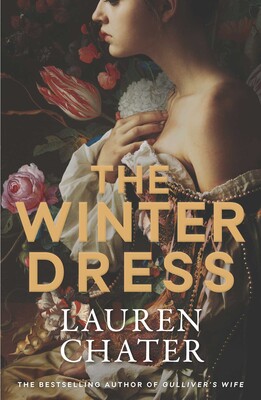 The Winter Dress
By Lauren Chater

‘From a few shimmering strands of truth, Lauren Chater has spun an intriguing story of love, loss and fulfilment.’ Pip Williams, bestselling author of The Dictionary of Lost Words

Two women separated by centuries but connected by one beautiful silk dress. A captivating novel based on a real-life shipwreck discovered off Texel Island by the bestselling author of Gulliver's Wife, Lauren Chater.

Jo Baaker, a textiles historian and Dutch ex-pat is drawn back to the island where she was born to investigate the provenance of a 17th century silk dress. Retrieved by local divers from a sunken shipwreck, the dress offers tantalising clues about the way people lived and died during Holland's famous Golden Age.

Jo's research leads her to Anna Tesseltje, a poor Amsterdam laundress turned ladies’ companion who served the enigmatic artist Catharina van Shurman. The two women were said to share a powerful bond, so why did Anna abandon Catharina at the height of her misfortune?

Jo is convinced the truth lies hidden between the folds of this extraordinary dress. But as she delves deeper into Anna’s history, troubling details about her own past begin to emerge.

On the small Dutch island of Texel where fortunes are lost and secrets lie buried for centuries, Jo will finally discover the truth about herself and the woman who wore the Winter Dress.

Praise for The Winter Dress
‘Vivid, expansive and richly imagined, The Winter Dress weaves together a fascinating historical mystery and an uncompromising portrait of the possibility and price of female autonomy with remarkable and deeply affecting results.’ James Bradley, author of Wrack

'Wrap yourself in Chater's prose. The Winter Dress is a captivating tale of discovery and obsession by one of Australia's very best historical fiction authors. Absolutely essential reading.' Melissa Ashley, author of The Birdman’s Wife