THE TRUE STORY THAT INSPIRED A WOMAN OF INTELLIGENCE

When I decided that I wanted to write about a woman in the 1950s, who was struggling with motherhood against the backdrop of the Cold War, the idea of her being a spy started to form. I’ll admit that at first I wanted her to be an assassin with a LOT of anger, but my editor talked me out of that one! So spy it was.

A friend told me about Elizabeth Bentley, who like us, had gone to Vassar College in New York State. Bentley graduated in 1930 and went on to study Italian, earning a master’s degree in languages from Columbia University in 1933. This background is very similar to the one I give Katharina Edgeworth, my main character, except that I place her as a translator at City Hall and the United Nations after Columbia.

Bentley joined a Communist Party cell at Columbia and fell madly in love with Jacob Golos, a Ukrainian-born revolutionary who conducted Soviet espionage through a Soviet-backed travel agency. He was also a founding member of Communist Party of the United States of America (CPUSA). In the book, I modeled Katharina’s former love interest, Jacob Gornev, after Golos.

In 1941 Bentley started working as a courier for the Communist party, making frequent trips between New York City and Washington, D.C., obtaining confidential stolen government documents and transporting them. This work of Bentley’s had a big influence on the plot of “A Woman of Intelligence,” as this is the work I have Katharina do. Of course the big difference is that Elizabeth Bentley did this for the Russians, and I have Katharina covertly working for the FBI.

So while Elizabeth Bentley certainly inspired the book, I did not follow her story that closely. She wasn’t a mother, and she didn’t live a gilded life in New York. Far from it. But I really liked the idea of giving a struggling mother a secret life and a sense of purpose. In the book, Katharina is not only doing something that very few women did, but she is helping her country, while also helping herself. It’s also a job that forces her to have a lot of secrets, and to meet fascinating people, and I really liked the idea of giving Katharina a secret life. In fact, my first title idea for this book was “Secret Life of Mother,” because I really think every mother deserves to have a life away from her family – secret or not! 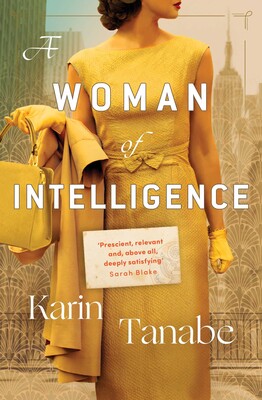 A Woman of Intelligence
By Karin Tanabe

An exhilarating tale of one remarkable woman’s journey to find her purpose, and herself, in post-war America.