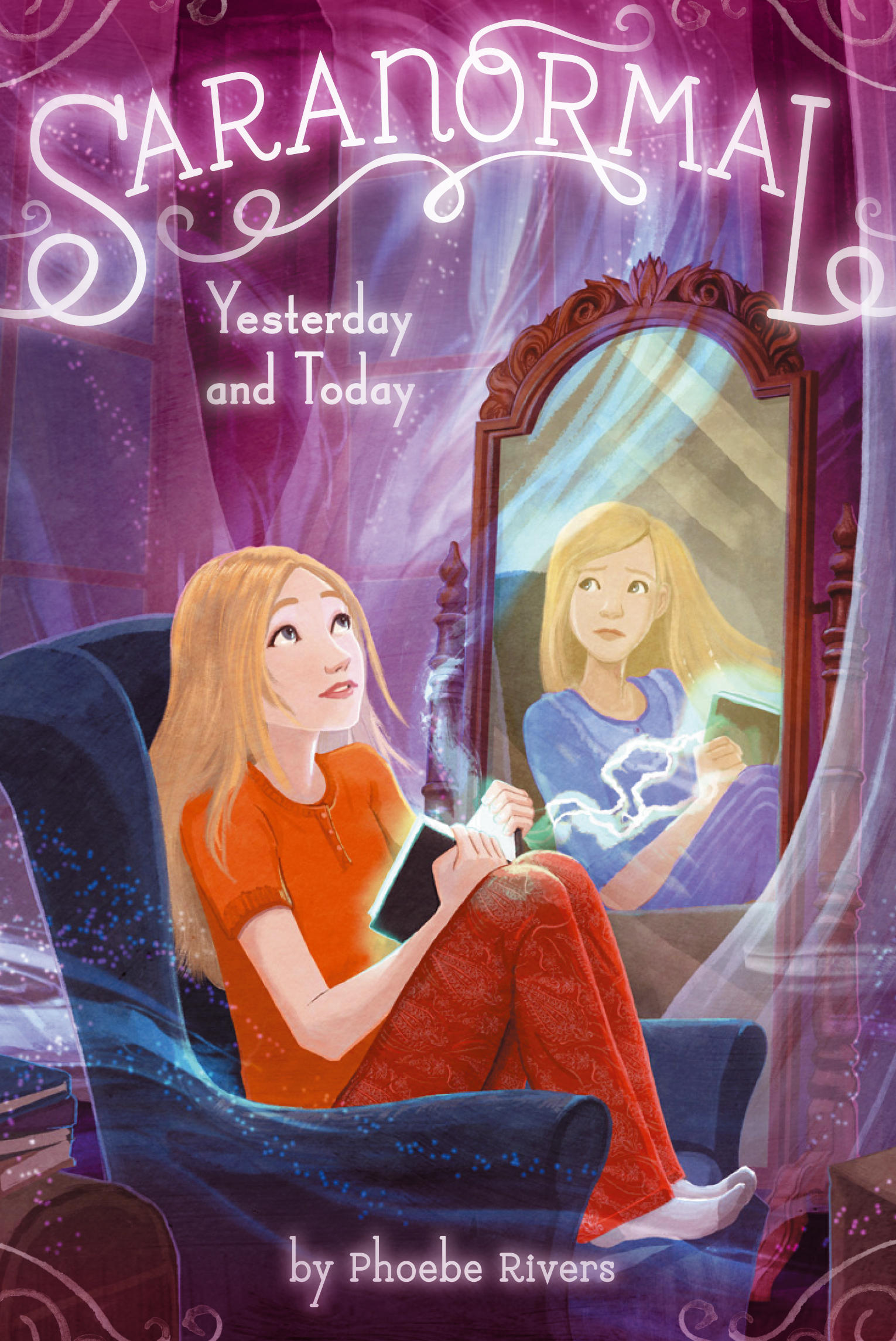 In the conclusion to the Saranormal series, Sara discovers the connections between the past, the present, and her powers.

Sara was absolutely thrilled to find the diary that her mother left hidden away so long ago—but she’s quickly disappointed by what she reads. She learns that her mother had paranormal powers too, and she hated them so much that she somehow managed to get rid of them. How did she do that? And is that the secret message she has for Sara? Will there ever be a way for them to communicate?

Meanwhile, Sara’s crush, Mason, seems to like her back, but he doesn’t want anyone else to know they’re hanging out. Especially not after a rumor gets started about Sara and her paranormal powers. Sara doesn’t care anymore what other people think—but Mason does, and that’s a problem. When Mason begins to fear that his association with Sara will somehow cause his own paranormal secret to be revealed, Sara has to decide: Will she stand up for who she is, even if it means losing the boy she likes so much?

Upstairs in my room, I sat on the floor next to my bed. My hands shook a little as I stared down at the diary. My mother’s diary. My mother, who I had never met because she died giving birth to me. Now I held in my hands the diary she kept when she was my age. I was finally going to “meet” her . . . at least, sort of.

Earlier in the day, my best friend, Lily, and I had found the diary hidden in a secret closet in a room I usually refer to as “the blue bedroom” because of the blue walls in there. But now Lily had gone home. She’d known without me having to tell her that I wanted to be alone with my mom’s diary. I shared just about everything with Lily, but this was different.

I set it down gently in my lap. Brushed it lightly with my fingertips. Took a deep breath.

“Whatcha got there?” demanded a loud voice in my doorway.

I whirled around to see who it was. Could it be my mother?

It was a spirit. But not my mother’s.

Perhaps I should explain. I can see spirits. People who have died. I’ve been able to see them for as long as I can remember. The house I live in—the old Victorian house in Stellamar, New Jersey, which belonged to my great-grandmother, Lady Azura—is filled with spirits. My dad and I had moved here two summers ago. At first I didn’t know that Lady Azura was my great-grandmother. I’d just thought she was some kooky lady who told fortunes and read tea leaves. She was one of several secrets that had been kept from me for a long time. But I’d grown to love Lady Azura, and by the time I found out she was my great-grandmother, I was thrilled about it.

The spirit standing in my doorway wasn’t one I was familiar with. Not one of our regulars, as I had come to think of them. We had several that inhabited the house, and I knew them all. This was an older woman. She had a lot of makeup on, and her hair was all done up like she’d just stepped out of the salon.

I slipped the diary off my lap and nudged it under my bed. Then I stood up and walked over to her.

“Can I help you with something?” I asked, trying to be polite when in reality I was really annoyed by the interruption.

She wandered into my room, checking out my stuff. I bristled as her semitransparent hands touched my things.

“Don’t suppose so.” She shrugged, examining the photo of my mom on my bedside table. “I was just bored. Name’s Shirley. My son, Harry, and his wife are downstairs. They’re trying to get me to show up and tell them where I hid my will. I think that’s all they care about. And I’ll tell them. But in my own sweet time.” She laughed mischievously. “It’s much more interesting up here.”

That explained it, then. My great-grandmother was a fortune-teller. She could conjure spirits. People flocked here for her services.

Lady Azura must be holding a séance with clients downstairs. She must have summoned this spirit for them. I had to get rid of her. Politely, of course.

“Thanks so much for dropping in,” I said. “I am sure Harry and his wife can’t wait for you to appear to them, though.”

“Pah!” she said, waving her hand. “I doubt it. He’s a good boy, my Harry. Not sure what he was thinking marrying That Girl, but then, he didn’t exactly consult me before he popped the question.” Her voice got lower as she started fiddling with my camera. I think maybe she was getting a little emotional. “I did notice that his wife was wearing my butterfly pin. It’s an old thing, probably not worth very much anymore. I guess Harry gave it to her after I died. I heard her tell the fortune-teller that it belonged to me and how happy she was to have it. It sort of seemed like she meant it . . . but I think she must think it’s valuable and that’s why she likes it.”

“Actually, I don’t think that’s true. I can sense that Harry and his wife want you to show yourself. I think they really miss you.” To be honest, I wasn’t getting much of a vibe from downstairs at all, but I was still pretty sure that what I said was true. And she seemed pleased to hear it. I had learned from Lady Azura that spirits really aren’t all that different from the living. They hold grudges and make mistakes just like people do. Sometimes they just need to be set on the right track. “I sense that they’re waiting for you, Shirley, and that you must be very important to both of them or else they wouldn’t be here.”

She stood up, tugging at her dress and patting her hair. “You can sense all that? Do you have the gift, like the lady downstairs?”

“Well, I am her great-granddaughter,” I replied. Even I could hear the pride in my voice when I said it.

Shirley regarded me carefully for a moment or two, as if she was trying to make up her mind about me. “All right, then,” she said finally. “I shall go join them.” And she shimmered into nothingness.

I waited a minute more. I didn’t want to be interrupted again. But my room was quiet. I sat down and pulled the diary out from under my bed.

It was light blue, with a puffy kind of cover, sort of like a photo album. Slightly scuffed in places. The word DIARY, embossed in gold lettering, was the only thing on the cover. The corners were bent in a little, as though it had been dropped once or twice.

I took a few deep breaths and tried to calm my racing nerves. This was my first real glimpse into my mother’s life, her world. I’d been so eager to meet her, but her spirit hadn’t shown itself to me. I’d found out about the diary from another spirit, that of an old sailor named Duggan. Duggan was one of our regulars, and when he was here, he was usually in the blue bedroom. He’d told me about the diary. And then I’d dreamed about where it was hidden. Only Lily and I knew about the diary. I hadn’t told my dad or Lady Azura about it. Yet. For now, I wanted it to be my secret. Something I shared with my mother. Just the two of us.

With a trembling hand, I opened to the first page.

She would have just turned twelve. The age I was when I first moved to Stellamar. She’d probably received the diary for her twelfth birthday.

A thought struck me. What if she only wrote in the diary for a few days or weeks and then got bored and forgot all about it? That would be really disappointing. But then again, I guessed a small glimpse into my mom’s life was better than nothing.

I fanned the pages. There was a lot of writing. She’d stuck with it. The entries came to a stop about two-thirds of the way through the book. Some days had short entries, just a sentence or two. Other days went several pages, the writing growing more urgent and slanted, as though she’d written while upset or excited. I resisted the urge to read these more interesting-looking entries. I’d start from the beginning and read it all in order. I turned back to the first page.

And then my phone vibrated, telling me I had a text.

In exasperation, I pulled my phone from my back pocket. I was going to shut it off, something I almost never ever did, but I didn’t want to be interrupted. Then I noticed who the text was from: Lily.

SORRY. I KNOW YOU’RE BUSY WITH YOU KNOW WHAT. BUT PLEASE CALL ME ASAP. IT’S MUCHO IMPORTANT!

I quickly texted back.

Then I turned off my phone.

I looked down at the diary. I couldn’t wait to meet her. My mom. Natalie, as she was known to everyone else.

. . . and then everything got a little blurry and I was plunged into a vision.
Phoebe Rivers

Phoebe Rivers had a brush with the paranormal when she was thirteen years old, and ever since then she has been fascinated by people who see spirits and can communicate with them. In addition to her intrigue with all things paranormal, Phoebe also loves cats, French cuisine, and wiling her afternoons away in coffee shops writing stories. She has written dozens of books for children of all ages and is thrilled to now be exploring Sara’s paranormal world.

More books in this series: Saranormal