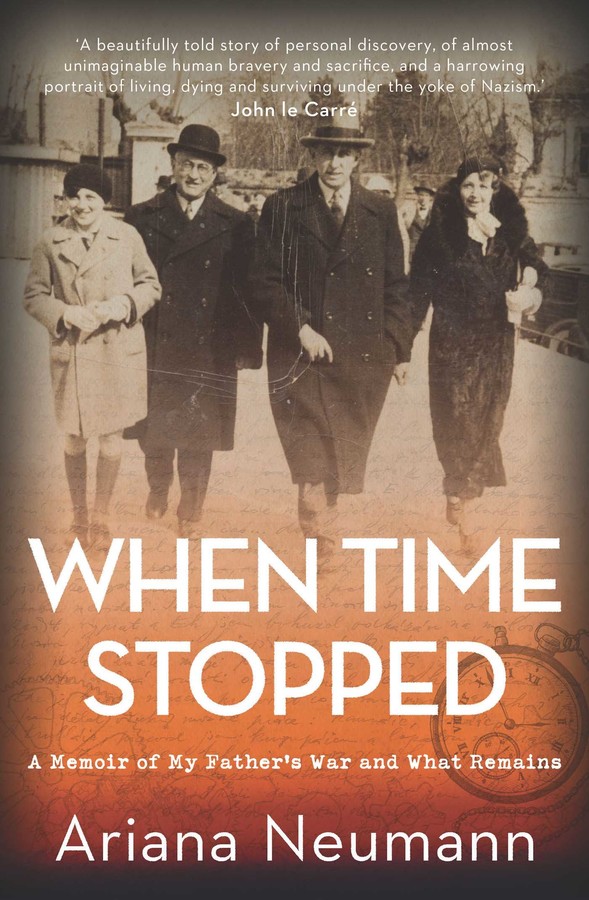 When Time Stopped
By Ariana Neumann
Read by Rebecca Lowman

'It’s not always a grim story. Alongside anger and despair there is love and hope. But the message is stark. This is the way bullies work. When Time Stopped is more than just history. It’s a warning.’ Michael Palin

In this remarkably moving memoir Ariana Neumann dives into the secrets of her father’s past: years spent hiding in plain sight in wartorn Berlin, the annihilation of dozens of family members in the Holocaust, and the courageous choice to build anew.

In 1941, the first Neumann family member was taken by the Nazis, arrested in German-occupied Czechoslovakia for bathing in a stretch of river forbidden to Jews. He was transported to Auschwitz. Eighteen days later his prisoner number was entered into the morgue book.

Of thirty-four Neumann family members, twenty-five were murdered by the Nazis. One of the survivors was Hans Neumann, who, to escape the German death net, travelled to Berlin and hid in plain sight under the Gestapo’s eyes. What Hans experienced was so unspeakable that, when he built an industrial empire in Venezuela, he couldn’t bring himself to talk about it. All his daughter Ariana knew was that something terrible had happened.

When Hans died, he left Ariana a small box filled with letters, diary entries and other memorabilia. Ten years later Ariana finally summoned the courage to have the letters translated and she began reading. What she discovered launched her on a worldwide search that would deliver indelible portraits of a family loving, finding meaning, and trying to survive amid the worst that can be imagined.

When Time Stopped is an unputdownable detective story and an epic family memoir, spanning nearly ninety years and crossing oceans. Neumann brings each relative to vivid life. In uncovering her father’s story after all these years, she discovers nuance and depth to her own history and liberates poignant and thought-provoking truths about the threads of humanity that connect us all. 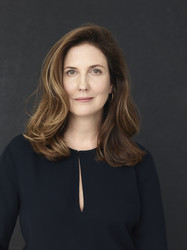 Ariana Neumann was born and grew up in Venezuela. She previously worked as a foreign correspondent for Venezuela’s The Daily Journal and her writing has also appeared in The European. She currently lives in London with her family. When Time Stopped is her first book.

‘When Time Stopped is a beautifully told story of personal discovery, of almost unimaginable human bravery and sacrifice, and a harrowing portrait of living, dying and surviving under the yoke of Nazism.’

'This deeply personal narrative tells the story of Ariana Neumann’s family, many of whom were killed by Nazis, and grapples with Neumann’s attempt to uncover secrets left behind by her Holocaust-survivor father after his death.'

‘Ariana Neumann’s story may strike a chord, and rightly so. The slow and pitiless brutality that took hold of much of Europe in the 1930s is a story that can never be told too often. What makes this account so effective is that it’s personal and, because of the dogged extensiveness of her research, Neumann reminds us of the small details that make the Nazi persecution of the Jews all the more chilling.

It’s not always a grim story. Alongside anger and despair there is love and hope. But the message is stark. This is the way bullies work. When Time Stopped is more than just history. It’s a warning.’

'Reads like a thriller and it is so, so timely. The work and emotion put into [the] book is unbelievable.'

'When Time Stopped is beautiful, deeply moving, and extraordinary in its reach and its depth. I felt such kinship with the way in which Ariana Neumann moved through the world in her journey. It is absolutely remarkable.'

– Edmund de Waal, author of The Hare with Amber Eyes

‘When Time Stopped is an astonishing family memoir that will imprint itself on your psyche as only the best books can, forever changing the way you look at your own family.  With a mastery of the dogged art of research rarely seen, and with an exquisite narrative sensibility to match, Ariana Neumann has breached the hidden surface of her family’s tumultuous past and brought not only their tragedies and sorrows, but also their joys and loves, to indelible light.  I will carry the experience of this book with me for a very long time.’

– John Burnham Schwartz, author of The Red Daughter, Reservation Road and The Commoner

‘In a grand house in Caracas in the 1970s, a young girl comes of age dreaming of becoming a detective and solving mysteries, particularly the mystery of her charismatic, enigmatic father. Four decades later, after he dies, and herself a mother, she embarks on an extraordinary journey through Central Europe and South America to uncover her father's past. Through pre-war Prague's intelligentsia to the rise of fascism in Europe to the horror of Hitler's camps, she combines a daughter's love with a profound yearning for truth.  The result is a love letter to a father who, out of sheer will and determination, did not allow the Nazis to destroy him - and who rose to become one of Venezuela's most successful industrialists.  Part literary memoir, part mystery tale, Ariana Neumann's tribute to her father is a classic story of redemption and love.’

– Janine di Giovanni, 2019 Guggenheim Fellow and author of The Morning They Came for Us: Dispatches from Syria

‘This book is utterly riveting: Ms. Neumann's memoir reads like a detective novel, as she unravels her late father's complex, agonizing yet inspiring trajectory. Conjuring the lives of her relatives murdered in the Holocaust, she brings their lost world to vivid life.’

‘I’ve read countless memoirs. I’ve read hundreds of books about the Holocaust and mysteries and detective stories and rigorously researched tomes of history and psychological studies of the effects of trauma. But never in my reading life have I ever come across anything akin to this magical, brilliant and gripping work of art combining all of these elements into a lyrical tapestry of one woman’s quest to understand her father’s mysterious past and therefore her own. To call this moving is an understatement. It is a journey of untold grace, sorrow and love.’

– Deborah Copaken, bestselling author of Shutterbabe: Adventures in Love and War and The Red Book

‘Growing up in a comfortable Caracas home, surrounded by joy, gaiety and the ‘birds of paradise’ -- and a father so revered that he had streets named after him in Venezuela -- Ariana Neumann willed an adventure to come her way. But nothing could have prepared her for the true-life story which was to unfold upon her beloved father’s death, back into the darkest depths of human history.

Lucidly-written, this is a gripping, heart-wrenching journey back to wartime Prague and Berlin. Ariana Neumann has written the book that her remarkable father simply couldn’t.’

– Georgia Hunter, New York Times bestselling author of We Were the Lucky Ones

‘Ariana Neumann's beautiful, meticulously researched memoir is an extraordinarily moving story of a family’s lost history, a father’s well-kept secret, and a daughter who pieces it all together with courage, tenacity, and most of all, love.’

‘When Time Stopped is Ariana Neumann’s journey of discovery, lyrically set down in this truly exceptional book.  She shines an intimate light upon a time unique in its horror, and tells a story of bravery, and rare survival. Yet the events she describes happened more than two decades before she was born. To a man to whom she was very close, but whose secrets she was only able to pursue after his death - thanks to the one hoard of evidence he never destroyed. This is a work of very great talent.’

‘Grippingly readable, chillingly sad but above all deeply sympathetic and suffused with love and understanding throughout.    A compelling and humane portrait of Ariana Neumann’s father and his courageous decision to survive.’

‘When Time Stopped is a remarkable and beautifully written book. Hans Neumann's story is astonishing, confirming that when it comes to the Holocaust we should expect only the unexpected. This is one of the most powerful and profoundly moving family stories of the Holocaust to have been published in many years and a must read.’

'Profound, gripping, and gut-wrenching…This heartbreaking and unforgettable memoir belongs in every library for the important history Neumann unearths. Like Anne Frank's diary, it offers a story that needs to be told and heard.'

'Neumann debuts with a deeply moving account of her father’s life during the Holocaust… This gripping, expertly researched narrative will inspire those looking to uncover their own family histories.'

'[An] astonishing story of survival … Neumann’s eloquent, skillfully researched book will appeal to many, especially those interested in family histories and the lives of Holocaust survivors.'

'I’ve read countless memoirs. I’ve read hundreds of books about the Holocaust and mysteries and detective stories and rigorously researched tomes of history and psychological studies of the effects of trauma. But never in my reading life have I ever come across anything akin to this magical, brilliant, and gripping work of art.'

'Through her painstaking work Neumann takes lifeless fragments ensuring her family's obscurity, and magically brings them back to life in this carefully woven beautifully written tapestry. This is a work of resistance against oblivion, a reminder against forgetting, an investigation driven by true love.'