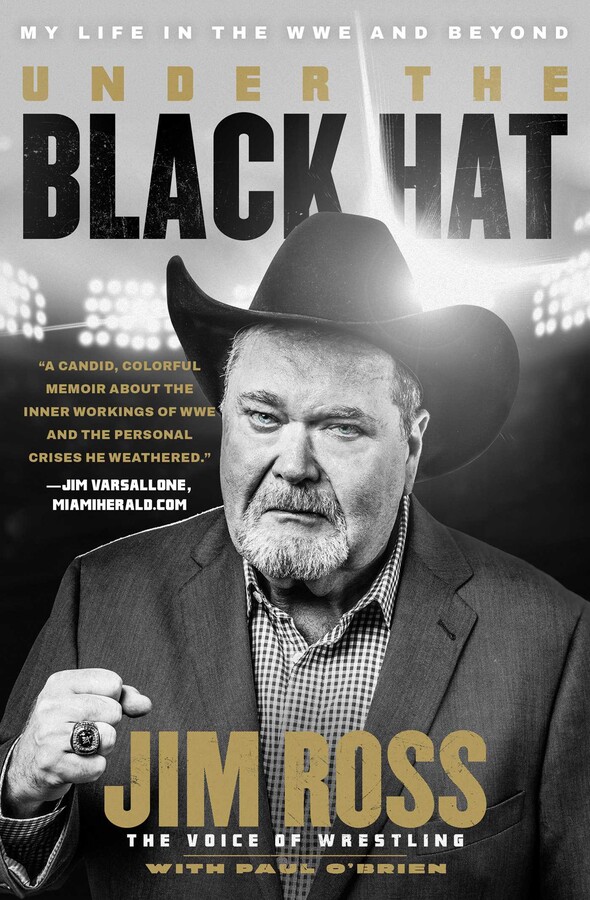 Under the Black Hat

My Life in the WWE and Beyond

From legendary wrestling announcer Jim Ross, this candid, colorful memoir about the inner workings of the WWE and the personal crises he weathered at the height of his career is “a must-read for wrestling fans” (Charleston Post Courier).

If you’ve caught a televised wrestling match anytime in the past thirty years, you’ve probably heard Jim Ross’s throaty Oklahoma twang. The beloved longtime announcer of the WWE “has been a driving force behind a generation of wrestling fans” (Mark Cuban), and he’s not slowing down, having signed on as the announcer of the starry new wrestling venture All Elite Wrestling. In this follow-up to his bestselling memoir Slobberknocker, he dishes out about not only his long career, which includes nurturing global stars like Stone Cold Steve Austin, The Rock, and John Cena, but also about his challenges of aging and disability, his split from collaborator Vince McMahon, and the sudden death of his beloved wife, Jan. The result is a gruff, endearing, and remarkably human-scale portrait, set against the larger than life backdrop of professional wrestling.

Ross’s ascent in WWE mirrors the rise of professional wrestling itself from a DIY sideshow to a billion-dollar business. Under the Black Hat traces all the highs and lows of that wild ride, in which Jim served not only as on-air commentator, but talent manager, payroll master, and even occasional in-ring foil to threats like Paul “Triple H” Levesque and Undertaker. While his role brought him riches and exposure he had never dreamed of, he chafed against the strictures of a fickle corporate culture and what he saw as a narrow vision of what makes great wrestlers—and great story lines. When suddenly stricken with Bell’s palsy, a form of facial paralysis that makes it impossible to smile, he started down his greatest fear—being cast out of the announcing booth for good.

Picking up where Slobberknocker left off and ending on the cusp of a new career in a reimagined industry, Under the Black Hat is the triumphant tale of a country boy who made it to the top, took a few knocks, and stuck around—just where his fans like him. Not only being one of the greatest wrestlers of the WWE, Ross is also “a master storyteller, and this book is the perfect forum for his forty years’ worth of tales” (Chris Jericho, former WWE champion). 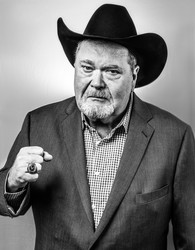 Jim Ross has been involved in professional wrestling for more than forty years. Elected into the WWE, NWA, and National Wrestling Halls of Fame, Ross is also a New York Times bestselling author, a BBQ guru, and the cohost of his own podcast, Grilling JR. He is the weekly voice of All Elite Wrestling: Dynamite, shown on TNT in the United States, TSN in Canada, and ITV and FITE in the United Kingdom. In addition to Under the Black Hat, he is the author of Slobberknocker: My Life in Wrestling and two cookbooks: J.R.’s Cookbook and Can You Take the Heat?

“I realized very quickly at the beginning of my WWE career that if I was going to be successful, I needed a conduit between me and the global audience watching from home. That conduit was Jim Ross. Proud to say we reached that global audience in a very big way." —Dwayne “The Rock” Johnson

“Jim Ross is not only the greatest wrestling play-by-play man ever, he's the architect behing the greatest roster in WWE history. He's also a master storyteller, and this book is the perfect forum for his forty years' worth of tales. So put on your black hat and get ready for an amazing read that's anything but 'bowling-shoe ugly'!" —Chris Jericho, former WWE champion, Inaugural AEW champion, and New York Times bestselling author

“JR is a legend on and off the screen. He has been a driving force behind a big generation of wrestling fans, and has helped to grow one of the greatest media marketing forces in history—and that's just the tip of the iceberg. His ability to connect with some of the most powerful entertainers of our time is unparalled. Any book from JR will be a must-read." —Mark Cuban

"[A] must-read for wrestling fans....Ross is most compelling when he reveals his vulnerability and explores the caverns of his psyche and his heart, detailing how both were tested in his turbulent years working for McMahon and in the wake of his late wife Jan’s death....A master storyteller at the broadcast table, Ross takes the reader on an entertaining ride in this fun memoir." —Josh Needelman, Charleston Post and Courier

“[Under the Black Hat] is a candid, colorful memoir about the inner workings of WWE and that personal crises he weathered.” Jim Varsallone, MiamiHerald.com

“Jim Ross’ latest autobiography is available now in print and digital formats and it is a fantastic read about the latter half of his career and some of the personal adversities he overcame. A follow-up to his bestselling memoir Slobberknocker, he talks about his career in the wrestling business, getting older, leaving WWE and the sudden death of his wife, Jan.” —Wrestle Zone, Mandatory.com

"I literally read Jim Ross’ Under the Black Hat over the course of one day, and just two sittings. I even kept putting off much-needed restroom breaks so I could keep turning the pages. I found myself thinking “just one more chapter,” chapter after chapter… It’s an excellent book, and well worth your time. I definitely put it up there among the best memoirs in the business. —Mick Foley, NYT Bestselling Author and Legendary Pro Wrestler

"Paul O'Brien is one of the best wrestling minds out there, and a truly gifted writer. I knew he and the legendary JR would deliver a book full of humour, pain and triumph. I was not wrong. Loved it.” —Former WWE World Champion “The Man” Becky Lynch

“A cursory glance at the television broadcasting industry shows that Ross is an anomaly. On-air roles are for the young and glamorous, and the elder statesmen are typically ushered out and replaced with their younger counterparts. Ross has persisted and endured, a touch of the past that fits seamlessly into the present” —Justin Barrasso, Sports Illustrated

Under the Black Hat

My Life in the WWE and Beyond