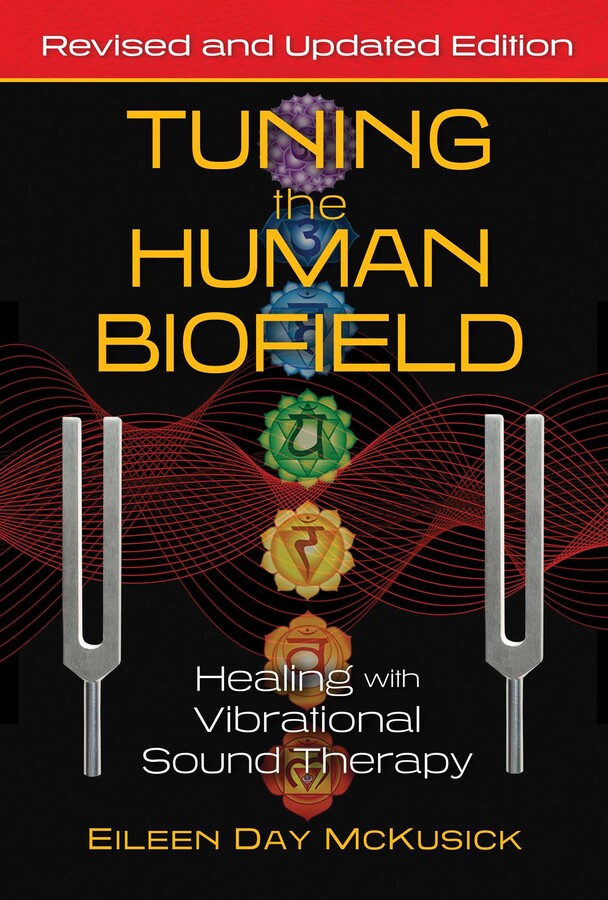 A guide to the basics of Biofield Tuning, using tuning forks to clear trauma stored in the human energy field

• Provides a precise map of the energetic biofield that surrounds the body, showing where specific emotions, memories, traumas, and pain are stored

• Winner of the 2015 Nautilus Silver Award

When Eileen McKusick began offering sound therapy in her massage practice she soon discovered she could use tuning forks to locate and hear disturbances in the energy field, or biofield, that surrounded each of her clients. She found these energetic disturbances correlated with the emotional and physical traumas her clients had experienced throughout their lives, with the biofield acting as a record of pain, stress, and trauma from gestation onward. Passing the tuning forks through these areas in the biofield not only corrected the distorted vibrational sounds she was hearing but also imparted consistent, predictable, and sometimes immediate relief from pain, anxiety, insomnia, migraines, depression, fibromyalgia, digestive disorders, and a host of other complaints. Now, more than 20 years later, McKusick has fully developed her sound healing method, which she calls Biofield Tuning, and created a map of the biofield, revealing the precise locations where specific emotions, memories, ailments, and traumas are stored.

In this book, McKusick explains the basics of Biofield Tuning practice and provides illustrations of her Biofield Anatomy Map. She details how to use tuning forks to find and clear pain and trauma stored in the biofield and reveals how the traditional principles and locations of the chakras correspond directly with her biofield discoveries. Exploring the science behind Biofield Tuning, she examines scientific research on the nature of sound and energy and explains how experiences of trauma produce “pathological oscillations” in the biofield, causing a breakdown of order, structure, and function in the body.

Offering a revolutionary perspective on mind, energy, memory, and trauma, McKusick’s guide to Biofield Tuning provides new avenues of healing for energy workers, massage therapists, sound healers, and those looking to overcome chronic illness and release the traumas of their past.

From Chapter 7. The Anatomy of the Biofield

Using the Chakras and the Biofield in Sound Healing

In this chapter we will go through the biofield anatomy in depth (please refer to the Biofield Anatomy map in appendix C for a visual reference). We’ll start at the feet and work our way up to the head. In each section we will learn the information that I have discovered in both the front and the back of the body.

In this biofield model, information found at the outer edge of the field--around five feet on most people--relates to gestation, birth, and early childhood. Information found close to the body is current or recent. All other years fall in between, like rings in a tree, or light-years. As we generate the information, it moves away from us. The fields of adults and children are about the same size, but the rings get smaller as we get older. A person age forty will have information from when they were age twenty stored at the midpoint of the field (relative to the edge of the body, not the midline of the body).

I have discovered that there appears to be a north-south axis as well as an east-west axis within the biofield. The north-south axis runs along the body from head to toe and appears to relate to what we understand to be the transverse waves of electromagnetism. It includes the toroidal-shaped bubble that comprises the bioplasmic body, or “soul,” and is time-bound, meaning it’s related to the three-dimensional space-time continuum in which our human lives exist. The east-west axis runs in the direction of outstretched hands parallel to the ground. It exists within the torus but also beyond it, to infinity, and in all directions. It appears to relate to the longitudinal waves of electromagnetism, also called Tesla waves, scalar waves, torsion waves, aether, or even the Higgs field. I relate this field to “spirit,” and it seems to contain, like the Akashic Record, the record of the soul’s journey, perhaps through multiple lifetimes; as such it is outside of time. Our human body in this lifetime appears to exist at the juncture of these two axes. It could also be called a convergence of energy and information.

The sides of each chakra are like file drawers containing records of a specific emotion or state of mind. We energize different parts of the bioplasmic body depending on what we think, feel, and experience. When we routinely spend a lot of time in a particular state of mind--for example, guilt-driven overdoing (related to the right hip)--we create an imbalance in the field that can lead to a breakdown of order, structure, and function in that region. In Biofield Tuning we are able to detect these areas of imbalance because of the perceived resistance present as reflected in the way the tone shifts in the tuning fork. We can then correct the imbalance by gently supporting the energy to return to the neutral midline down the center of the body, while modulating the tonal quality to a more balanced expression. I go into detail on the technique of using tuning forks in Biofield Tuning, as well as how to choose your tuning forks, in the next chapter.

Healthy/balanced: Thoughts and feelings in accord with actions; present in the now; comfortable in the home; right livelihood; high energy level

The left side of the root chakra speaks of things we want to be doing, to be, or to have, but we are not doing, being, or having them. This could be something like wanting to start one’s own business and thinking about it a lot, but not taking any action--this would show up immediately off the left side of the body. There is a sense with energy stuck on this side that “the rubber isn’t getting on the road,” spinning tires, and an inability to move forward toward goals, dreams, and desires.

This is an area I also often see activated in people who have eating or body-image disorders. There is a strong inclination to engage in different behavior, but an inability to do so due to the inner battle and sense of powerlessness. I recently treated two women in the same day who were both suffering from left-side sciatic pain, and they both had the same energetic imbalance in this area due to eating disorders.

I myself occasionally have left-side sciatica pain flare up, and it almost always happens when I am folding laundry--my least-favorite chore. I would rather be doing just about anything other than folding laundry.

The right side of the root chakra speaks of being busy, but not necessarily doing the things we want to be doing. A person who is very busy will have a lot of resistance around this hip. There is another key place, about fourteen to eighteen inches off the side of the body on the right side, which I call “busy mind” (see figure 7.2). This is something found in almost everyone except for skilled meditators. And even meditators can have what I call the “meditators’ paradox,” whereby the person knows how to go into spaciousness and presence, but when not meditating that person’s mind is just as busy as anyone else’s.

Just inside the busy-mind region is the busy-body region, which occupies the distance from the surface of the body to about twelve or so inches out. This is an area that will be energized if the person is always in motion. People who have a lot of energy in this area are often trying to avoid their feelings, particularly feelings of sadness. As long as they stay in motion, they stay out in front of their feelings, which tend to settle on them when they stop, so they keep going. I recently ran into a friend whom I hadn’t seen in a while who was limping and using a cane. I asked him what was going on, and he said that he had to get his right hip replaced. I said to him, “Ah, the hip of chronic overdoing,” and he said, “Exactly--I’ve been overdoing my whole life.” So here he was, only sixty years old and he had worn out his right hip. People who are very busy will often end up with right-hip issues, including sciatica and arthritis.

The back of the root chakra speaks to me of our physical home. If there is a lot of static or a diminished tone here, it usually relates to some kind of stress regarding the home: a renovation, clutter, needing but not being able to afford a new roof (or floor or drywall repair--that sort of thing), an uncomfortable roommate situation, having to move, etc.

The back of the root chakra can also speak of a tailbone injury, which will show up as static even many years after the injury occurred. I recently worked with a woman who suffered a tailbone accident while snowboarding. She had just moved to a new home, had two small children, and had to do the lion’s share of the domestic work because her husband was busy working. She was exhausted from doing way too much but was determined to get out and have some fun. The accident pushed her tailbone over toward the right, where the bulk of her root energy had shifted to (i.e., the overdoing side) while jamming it up into the sacrum, resulting in swelling and pain in her left sacral area (i.e., frustration). There is no doubt that she was very frustrated from overdoing around the home, and the pattern of her accident revealed exactly this.
Eileen Day McKusick

Eileen Day McKusick is a researcher, inventor, writer, educator, and practitioner who has been studying the effects of audible acoustic sound on the human body since 1996. She is the originator of a unique sound therapy method called Biofield Tuning (formerly sound balancing) that uses tuning forks to detect and correct distortions and static in the biofield (human energy field/aura). She is the author of the book Tuning the Human Biofield: Healing with Vibrational Sound Therapy. Eileen teaches Biofield Tuning nationally and internationally and speaks at conferences about sound, consciousness, and cosmology. She has an MA in Integrative Education and has currently paused her pursuit of a PhD to write her second book. She continues to pursue research and has partnered with a group of scientists to apply the scientific method to her Biofield Anatomy Hypothesis.