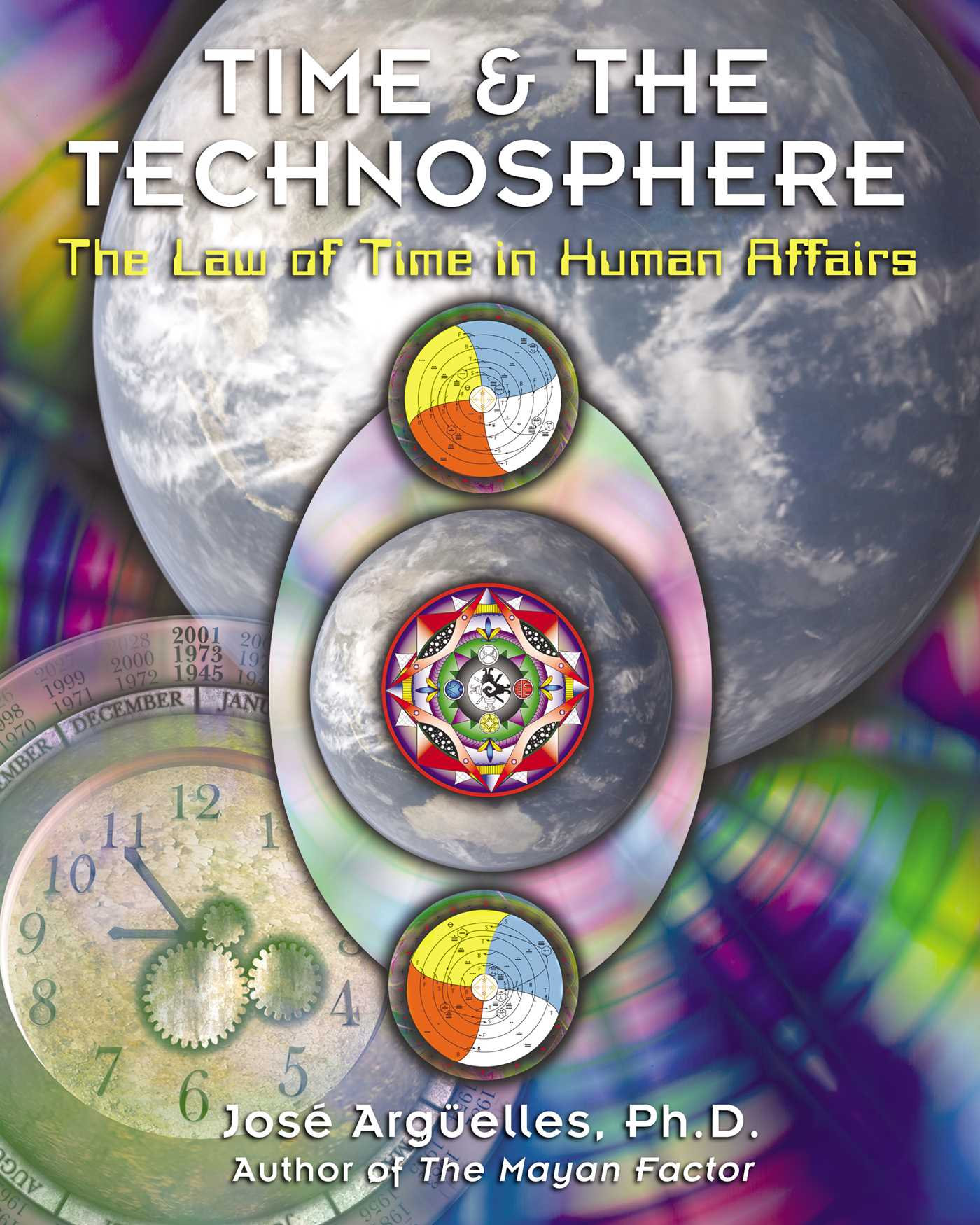 Time and the Technosphere

The Law of Time in Human Affairs

A groundbreaking study that distinguishes the natural time of the cosmos from artificial mechanistic time.

• Reveals September 11 as the signal of the end of artificial time according to the Law of Time.

• Explains the Great Calendar Change of 2004 and its enormous potential for the future of humanity.

In Time and the Technosphere, José Argüelles presents a groundbreaking study that distinguishes the natural time of the cosmos from the artificial mechanistic time under which we currently live. Argüelles defines the actual nature of time as the frequency of synchronization. Applying this Law of Time to an understanding of the entire system of life on Earth, he shows that in order to not destroy Earth's ability to sustain life, we must change our definition of time and adopt a natural harmonic calendar based on the 13-moon 28-day cycle. Until the creation of the Gregorian calendar and the 60-minute hour, most of humanity lived by the 28-day cycle of natural time. The adoption of artificial time has subjected us to a 12:60 time frequency that governs the entire global industrialized civilization--the technosphere. With the collapse of the Twin Towers on September 11, a fissure was created in this artificial technosphere, opening up the noosphere (Earth's mental envelope).
Humanity has a golden opportunity to leave the strife of the past and enter a time of peace by adopting a harmonious natural calendar that will repair the damages caused by the irregular tempo of technospheric time. Our last best chance to adopt this natural time and step into the bright new future promised by the galactic shift of 2012 is the Great Calendar Change of 2004, a new discovery based on the author's mathematical research into the Mayan calendar first begun in his landmark work The Mayan Factor. In Time and the Technosphere, Argüelles reveals the clear distinction between third-dimensional astronomical time and the fourth-dimensional synchronic order of the Law of Time, which holds enormous potential for the future of humanity.

A science or any scientist that unquestioningly follows the Gregorian calendar is, in reality, not worthy of the name. What is science? A concern for logic and precision of measure, we might answer, as well as standards of measure which utilize uniform units of measure in accord with what is being measured. Yes, the year is calculated as being 365.241299 days in length, but if the annual standard of measure that is used is irregular and unscientific, then it avails nothing, and indeed deforms the mind leading it down byways that may only end in self-destruction. Thus, the pursuit of a true and accurate year in itself may be an illusory pursuit, blinding us to the actual nature of time, and leading us away from a genuine understanding of ourselves, and our role and purpose on this Earth.

To change and replace the calendar with the thirteen moon standard is to return us to our original purpose, leading us back to pathways of harmony and natural health. According to the Law of Time, the damage already inflicted in the time humanity last hesitated and lost the chance to alter its timing frequency, 40 years ago, has been incalculable. The final opportunity to change the calendar and the timing frequency is now upon us. Because of this we must be very clear and unshakable in our understanding and determination to expose and eliminate the current civil calendar for once and for all. Even apologist David Duncan's unabashedly pro-Gregorian book Calendar (1999) concludes with its time line on the date 2012, "Current Mayan Great Cycle will end."11 But will we also end? By 2012, it will be too late to change. We must begin to change now.

In reviewing the quirks and twists of history that constitute the Gregorian calendar, we must ask: why do we continue to use such an instrument, and what are its effects? Is a calendar something more than a tool for scheduling the payment of debts (calends), or is it an instrument of synchronization? The harmony or disharmony of time is a profound matter rooted in the instrument of time reckoning that we use. There can be little question that we live more in a time of chaos than of harmony. We may also say in regard to the effect of standards of measure on the mind, that the chaos of the time is embedded in the calendar we use. If we are to leave this time of chaos and enter a time of harmony, then we must exchange the instrument in which the chaos is embedded for an instrument that is the very model of harmony?the Thirteen Moon/28-day count. This is the choice humankind must now make.
The issue of the nature of time, or of the times in which we are living, cannot be separated from the issue of the calendar. The very nature of the calendar that the world follows has stunted the mind and warped the body's innate timing sensibility, reducing the understanding of time to being merely a matter of chronology. "Chronology is a register or reckoning of successive years, a time scale. It may also be described as a system of registering time massively."12 Virtually all time reckoning has proceeded from astronomical indicators, the major exception being the Maya, who actuated from a solely mathematical outlook. Yet, with this mathematical outlook, the Maya devised a chronological method that has never been surpassed, a fact attested to by many, including the architects of the Kitt Peak Observatory, Tucson, Arizona, where a mosaic mural depicting the civilization of the Maya asserts the superiority of their calendar over that of the Europeans.

It is significant that the earlier calendar reform movement, while occasionally acknowledging the brilliance of the Maya, made no use of the Mayan knowledge. But this was because the time sensibility was restricted to thinking of time solely in terms of chronology, or at best as a schedule for keeping good accounts, with little comprehension at all of the synchronic nature or order of time. And since the system of chronology was synonymous with the system of control embedded in the Gregorian calendar system, the earlier reform movement failed altogether to make any impact on the Vatican, much less on the global power structure itself.

All of the thought, action, and good intention put into the years of calendar reform notwithstanding, the Gregorian calendar prevailed, and tragically, not one of the proposals or recommendations was ever even considered for adoption by the papal authorities who maintain control over the calendar. In the 1930s, the propaganda of the Church was aimed at limiting any possibility of reform, for it would not give up the succession of the seven day week. In any perpetual calendar, such as the Thirteen Moon/28-day calendar, the observance of the Day Out of Time is necessary for maintaining the harmony of the 52 weeks which completes itself in 364 days. The continuous succession of the week does not stand in a constant relation with the other elements of the calendar and is one of the main causes of confusion in the Gregorian calendar. Arguing that such a break as a Day Out of Time, no day of the week at all, would plunge the world more deeply into chaos, barbarism and war, the Vatican effectively blocked all effort at reform. The completion of the century of total war, capped by the Inevitable Event, roundly refutes this point. It may just as easily be argued that because we did not change the calendar, we are now plunged into the final barbarism and unholy war.
José Argüelles

José Argüelles, Ph.D. (1939-2011), worked full time on behalf of the World Thirteen Moon Calendar Change Peace Movement and was president of the Foundation for the Law of Time. He was the author of numerous works, including The Mayan Factor, Earth Ascending, and Surfers of the Zuvuya.

"José Argüelles' timely work Time and the Technosphere makes a vital contribution to the great paradigm shift in human cultures that is now accelerating. There is a higher dimension of natural time inscribed in the cosmos and a natural calendar that would help humanity mature into the awakening global consciousness that is now essential for future sustainability and well being. This book is an important contribution to the awakening event that is now emerging on a planetary scale."

Time and the Technosphere

The Law of Time in Human Affairs