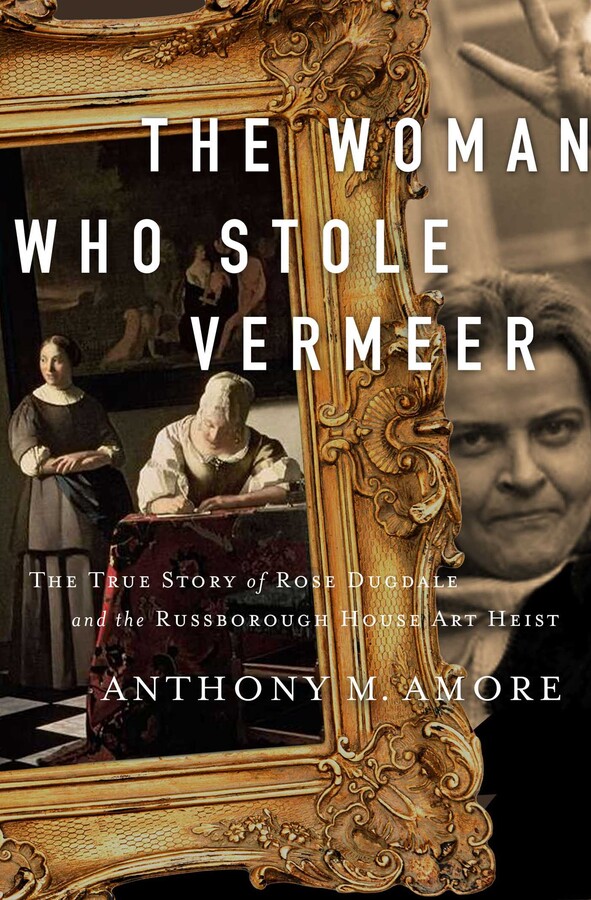 The Woman Who Stole Vermeer

The extraordinary life and crimes of heiress-turned-revolutionary Rose Dugdale, who in 1974 became the only woman to pull off a major art heist.

In the world of crime, there exists an unusual commonality between those who steal art and those who repeatedly kill: they are almost exclusively male. But, as with all things, there is always an outlier—someone who bucks the trend, defying the reliable profiles and leaving investigators and researchers scratching their heads. In the history of major art heists, that outlier is Rose Dugdale.

Dugdale’s life is singularly notorious. Born into extreme wealth, she abandoned her life as an Oxford-trained PhD and heiress to join the cause of Irish Republicanism. While on the surface she appears to be the British version of Patricia Hearst, she is anything but.

Dugdale ran head-first towards the action, spearheading the first aerial terrorist attack in British history and pulling off the biggest art theft of her time. In 1974, she led a gang into the opulent Russborough House in Ireland and made off with millions in prized paintings, including works by Goya, Gainsborough, and Rubens, as well as Lady Writing a Letter with her Maid by the mysterious master Johannes Vermeer. Dugdale thus became—to this day—the only woman to pull off a major art heist. And as Anthony Amore explores in The Woman Who Stole Vermeer, it’s likely that this was not her only such heist.

The Woman Who Stole Vermeer is Rose Dugdale’s story, from her idyllic upbringing in Devonshire and her presentation to Elizabeth II as a debutante to her university years and her eventual radical lifestyle. Her life of crime and activism is at turns unbelievable and awe-inspiring, and sure to engross readers.

Anthony Amore is Director of Security and Chief Investigator at the Isabella Stewart Gardner Museum, where he is charged with the ongoing efforts to recover thirteen works of art stolen from the museum on March 18, 1990. Additionally, he is the co-author of Stealing Rembrandts (a Wall Street Journal bestseller) and author of The Art of the Con (a New York Times bestseller) and provides analysis on issues related to security and terrorism for the BBC, NBC News, NPR, CNN, FOX, and others. He lives in Boston, MA. Learn more at www.anthonyamore.com.

“Amore illustrates with an irresistible blend of wryness and affection [the] engaging pleasures [of] The Woman Who Stole Vermeer. Rose is terrific company: clever, forthright and flamboyant. She is still alive today and is now praised by the former Irish republicans. Her Facebook profile photo is the Russborough Vermeer.”

"Dugdale's fair-minded biographer pronounces her a 'major figure in the annals of criminal history.'"

"Anthony M. Amore’s engrossing new book is the first deep dive into the peculiar life of Rose Dugdale, the 33-year-old British heiress with a PhD who, at the time of her arrest, was also wanted for gunrunning, a bombing attempt and armed hijacking."

“Amore charts in this engrossing account the transformation of Rose Dugdale from a privileged English debutante into a committed radical and fighter for the liberation of Northern Ireland from British rule. Thorough research is matched by prose that keeps the reader turning the pages. True crime and history buffs will revel in the saga of this truly fascinating woman.”

"A rollicking biography of a female art thief. In his lively third book about art and crime, Amore, the director of security at the Isabella Stewart Gardner Museum, tells the story of a “fiery, bold, and brash” Englishwoman who stole for nationalistic reasons...A captivating, detail-rich biography of a 'criminal legend.'"

"Anthony Amore has written an engrossing character study of Rose Dugdale, a remarkable criminal. I'm very familiar with Anthony and his work, and there are similarities in how he analyzes thefts of art to come up with a specific offender profile and my process for analyzing crimes of violence. Why + How = Who."

“Absorbing. Amore provides effective context for Dugdale’s radical actions and offers an examination of the significance of Vermeer’s art that bolsters the sophistication of her crimes. Readers will be enthralled by the many worlds Dugdale seemed to inhabit. A captivating book that will entertain fans across genres with its seamless blend of true crime, biography, and art history.”

"Masses of detail, with insights into the history and culture of the time when Bridget Rose Dugdale's ideas and activities were front-page news. The views of senior IRA people concerning her remarkable adventures as reputational matters are lucid and compelling."

“Amore does a fine job of presenting the facts of Dugdale’s life and dispelling the myths about her exploits. A fascinating account of political fervor and purpose and a woman who had the courage of her convictions.”

"A meticulous account of the impassioned British heiress who robbed the greatest private art collection in the world—riveting."

– Matthew Hart, author of the award-winning "The Irish Game: a True Story of Crime and Art," and the thriller "The Russian Pink"

"Amore creates a compelling, illuminating portrait of a woman of deep conviction and daring. He has an uncommon nuance in his analysis, and nobody can surpass him for expertise when it comes to the theft of priceless art. The story he tells is a complex one of morality, transgression, and invention.”

A fine portrait of one of the 20th century’s oddest criminals: Rose Dugdale, reluctant debutante turned art thief and would-be-terrorist.

As beguiling, complex, and deftly wrought a portrait of Rose Dugdale as the Vermeer she so famously stole. A feat of scholarship and storytelling that will surely go down as the definitive account of the many lives of one of modern history’s most compelling—and confounding—women.

“An astonishing personal story and a fascinating art heist tale, The Woman Who Stole Vermeer promises to be a page-turner.”

The Woman Who Stole Vermeer