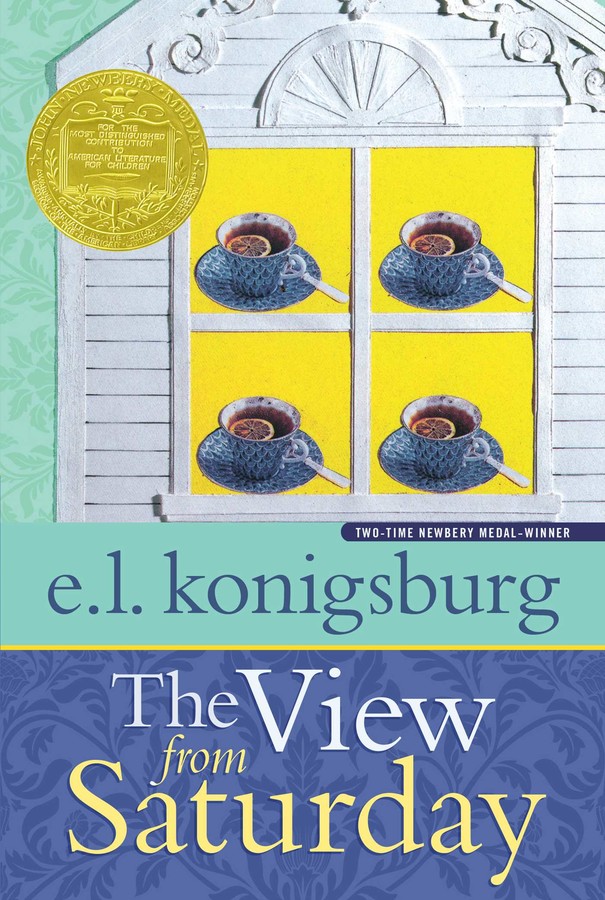 The View from Saturday

HOW HAD MRS. OLINSKI CHOSEN her sixth-grade Academic Bowl team? She had a number of answers. But were any of them true? How had she really chosen Noah and Nadia and Ethan and Julian? And why did they make such a good team?
It was a surprise to a lot of people when Mrs. Olinski's team won the sixth-grade Academic Bowl contest at Epiphany Middle School. It was an even bigger surprise when they beat the seventh grade and the eighth grade, too. And when they went on to even greater victories, everyone began to ask: How did it happen?
It happened at least partly because Noah had been the best man (quite by accident) at the wedding of Ethan's grandmother and Nadia's grandfather. It happened because Nadia discovered that she could not let a lot of baby turtles die. It happened when Ethan could not let Julian face disaster alone. And it happened because Julian valued something important in himself and saw in the other three something he also valued.
Mrs. Olinski, returning to teaching after having been injured in an automobile accident, found that her Academic Bowl team became her answer to finding confidence and success. What she did not know, at least at first, was that her team knew more than she did the answer to why they had been chosen.
This is a tale about a team, a class, a school, a series of contests and, set in the midst of this, four jewel-like short stories -- one for each of the team members -- that ask questions and demonstrate surprising answers.

Teaching Guide
About the Book
Mrs. Eva Marie Olinski is charged with appointing four students to represent her sixth-grade class in the Epiphany Middle School Academic Bowl competition. Though she doesn't have a clue as to why she chooses Noah, Ethan, Nadia, and Julian, she has a premonition that her decision is a good one. These four students, calling themselves "The Souls," surprise everyone by defeating the seventh and eighth graders and winning the school-wide competition. When they go on to win the state Academic Bowl Championship, Mrs. Olinski begins to realize what she didn't know in the beginning. Each of "The Souls" had been on a journey -- a journey that interlocked their lives like pieces of a jigsaw puzzle. What Noah, Ethan, Nadia, and Julian had learned along the way is the true meaning of friendship. What they discover when they find one another is that kindness and friendship make them a team.
Pre-reading Activity
The View from Saturday is about teamwork. Divide the class into three teams. Assign each team five questions taken from the fifteen questions at the end of the novel. Allot the teams one class period to find the answers to the questions. Tell them that they may use reference sources in the media center or search for answers on the Internet. Allow each team time to share their answers with the class. Then engage the class in a discussion about teamwork. How does a group become a team? What is the responsibility of each team member? Ask each group to explain how they organized their team.
Discussion Topics
Reaching Across the Curriculum: Activities and Research
LANGUAGE ARTS
Pretend that you are on the staff of The Epiphany Middle School newspaper. Write a feature article about "The Souls." Include an interview with each of "The Souls" and Mrs. Olinski.
Read From the Mixed-Up Files of Mrs. Basil E. Frankweiler by E. L. Konigsburg. How might Claudia and Jamie Kincaid be considered "Souls?" Write a letter that Claudia and Jamie might write to "The Souls" congratulating them on their victory.
SOCIAL STUDIES
Izzy Diamondstein and Margaret Draper are married in a Jewish ceremony. Research the meaning of the chupah, the bridal canopy, and other significant parts of the ceremony. Contrast their wedding ceremony with wedding ceremonies in other religions.
Margaret Draper and Izzy Diamondstein do volunteer work in their community. Margaret volunteers at the garden club, and Izzy at the public library. Find places in your city or community that use senior citizens as volunteers. Are there places or agencies that use the volunteer services of young teenagers? How does volunteering relate to teamwork? Why is teamwork essential for a strong and healthy community?
SCIENCE
The sea turtles that Nadia and Ethan help save are a threatened species. Find out the difference between threatened and endangered. What animals that live in your area of the country have been placed on the threatened or endangered species list by the Environmental Protection Agency? What state and federal laws protect them? How are the laws enforced in your state?
Nadia gets an A on a report that she writes about the five kinds of sea turtles. Brainstorm the kind of information that Nadia might have included in her paper. Prepare a report on one of the following types of sea turtles: loggerheads, greens, leatherbacks, hawkbills, or Kemp's ridley.
MATH
Develop a list of behavioral characteristics that you would label mischief and those that you would label malice. Observe student behavior in your school for one week and chart behaviors in the two categories. Construct a graph that illustrates the occurrences of such behavior in your school. What can you deduct from your observation about student behavior in your school?
CULMINATING ACTIVITY
Have a victory tea party for "The Souls" at Sillington House. Prepare typical foods for high English tea. Write invitations to the party in calligraphy. Play background music that would be especially appealing to "The Souls." Select from among your belongings at home an appropriate item as a gift for each of "The Souls" and Mrs. Olinski. Be prepared to share why you chose each specific gift.
This guide was prepared by Pat Scales. She is the library media specialist at Greenville Middle School, Greenville, South Carolina, and she teaches children's literature at Furman University.

The View from Saturday