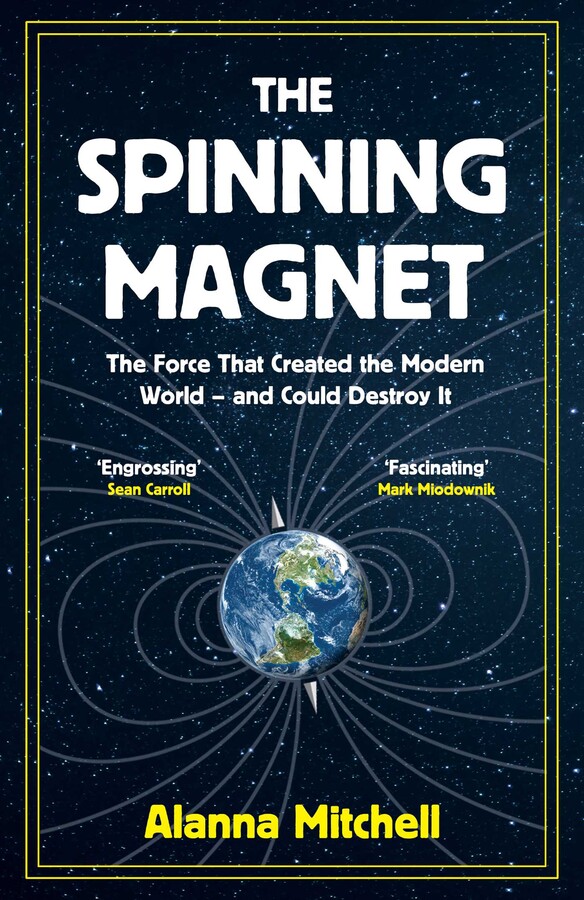 The Force That Created the Modern World – and Could Destroy It

Many times through deep history Earth’s magnetic poles have switched places, leaving our planet’s protective shield weaker and life vulnerable to devastating solar storms. The last time it happened was 780,000 years ago, long before humans emerged, but it won’t be long until it happens again.

And when it does, will it send us back to the Stone Age?

The Spinning Magnet is a fascinating insight into what may lie ahead.

From the pivotal discoveries of Victorian scientists to the possibility of solar radiation wiping out power grids, and the secrets of electromagnetism, Alanna Mitchell reveals the truth behind one of the most powerful forces in the universe.

An award-winning journalist, Alanna Lentin is the author of Dancing at the Dead Sea: Tracking the World's Environmental Hotspots, which has won international acclaim and published in the US, Canada and the UK (Transworld).

‘Stokes the reader’s curiosity about one of the most critical but invisible forces in the universe.’

‘Mitchell’s portrait gallery is researched with a depth and breadth that make its protagonists’ triumphs and failures compelling. She also gives entertaining accounts of today’s working geoscientists… Her interviews provide insights into their thoughts and actions that transcend the stereotypes of inscrutable nerd or heroic explorer.’

‘The Earth’s magnetic field…tends to be taken for granted. In reality it’s a fickle, ill-understood phenomenon. Alanna Mitchell delves into the mystery, in an engrossing book that features a new surprise on every page.’

‘A fascinating untold story of science that is full of mystery and intrigue, and written with a great deal of style.’

‘A compelling yarn describing our historical efforts to understand the force that created the world, and as the subtitle warns, could bring about its end…Destined to become a classic of popular science.’

‘A compelling tale of unseen and unforeseen natural forces – and a reminder that we’ve staked our home on a planet that remains infinitely strange, dangerous – and ever full of wonder.’

‘In The Spinning Magnet, Alanna Mitchell pulls off the rare trifecta in science writing: an engrossing plot of a planetary mystery, authentic character portraits of scientists and their passion for their work, and explanations of complex physics in easily understandable terms.’

‘Mitchell draws us into a spellbinding scientific detective story, told over the ages, as she nimbly explains magnetism’s role in everything that matters. Each chapter is filled with exciting new revelations written in clear crisp prose. A skilled writer, Mitchell puts magnetism on the map!’

The Force That Created the Modern World – and Could Destroy It