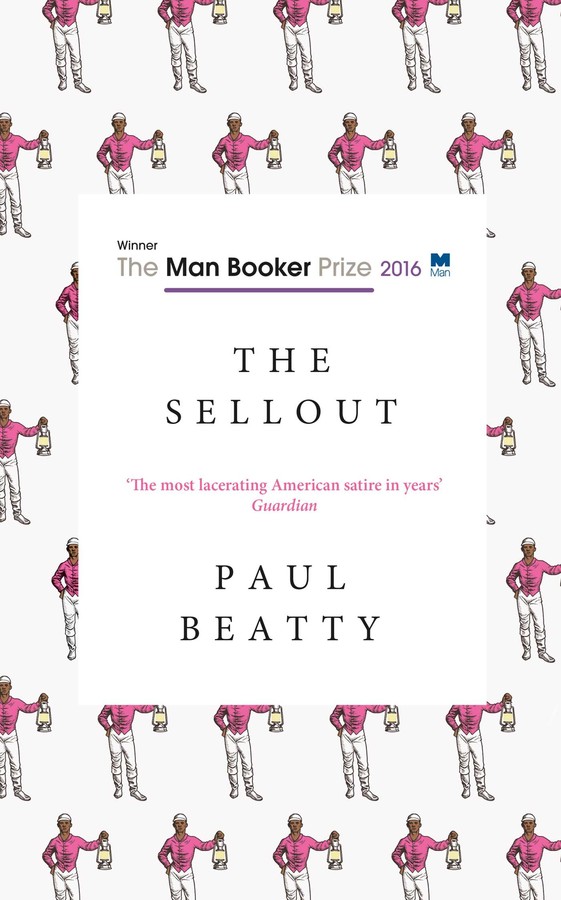 WINNER OF THE MAN BOOKER PRIZE 2016

A biting satire about a young man's isolated upbringing and the race trial that sends him to the Supreme Court, The Sellout showcases a comic genius at the top of his game.

Born in Dickens on the southern outskirts of Los Angeles, the narrator of The Sellout spent his childhood as the subject in his father's racially charged psychological studies. He is told that his father’s work will lead to a memoir that will solve their financial woes. But when his father is killed in a drive-by shooting, he discovers there never was a memoir. All that’s left is a bill for a drive-through funeral.

What’s more, Dickens has literally been wiped off the map to save California from further embarrassment. Fuelled by despair, the narrator sets out to right this wrong with the most outrageous action conceivable: reinstating slavery and segregating the local high school, which lands him in the Supreme Court.

In his trademark absurdist style, which has the uncanny ability to make readers want to both laugh and cry, The Sellout is an outrageous and outrageously entertaining indictment of our time.

‘A no-holds-barred satire about the history and legacy of racism in America’.

– Guardian, Best Books of the Year

‘A book of coruscating satire and the darkest humour whose bilious narrative voice leaves you at once enthralled and exhausted’.

‘One of the few books of recent years that has made me choke with laughter’.

‘Wow, the Man-Bookers got it right! Nothing is harder to write or easier to read than a full-on comic-philosophic novel that makes you laugh and think, sometimes at the same time. Nathanael West and Joseph Heller are hooting from heaven for this one. If you haven’t already read Paul Beatty’s The Sellout, your life is more meagre for the omission’.

– Telegraph, Books of the Year

‘A hilarious, anger-fuelled cadenza that feels as if it were written in one manic burst’.

‘I was banned from reading in bed because I was laughing so much.’

‘A timely satire as well as a hugely entertaining and memorable novel’.

‘A sharp satire of contemporary America and an irreverent but poignant take on the country’s racial tensions’.

‘There is so much to enjoy in this profane battering-ram of a novel’.

‘A breathtakingly confrontational American race satire with a big laugh and a gasp on every page’.

'This brilliant satire on racial politics in the US is at once timely, hilarious and outstanding’.

‘One of the most astute pieces of satire to have discussed the heightened racial tension in the USA in recent years…one of the most compelling and funny pieces of politically relevant fiction seen for some time’.

‘A compelling act of demonstrative rhetoric, a masterful show of verbal energy that questions just how far equality has come and where it hopes to go’.

‘Beatty is an original and irreverent talent.’

‘Paul Beatty’s blistering The Sellout shares DNA with the work of Swift, as well as possessing some of the savagery of Wyndham Lewis, and the single-minded absurdity of Myles na gCopaleen.’

‘There’s satire and then there’s satire, and without question Paul Beatty’s caustic third novel, The Sellout, definitely falls into the latter category…Brutally honest and very funny.’

‘An outrageous scattergun satire taking aim at racism and what racism has done to black Americans…The Sellout aims to do for race relations what Joseph Heller’s Catch-22 – a favourite novel of Beatty’s – did for the Second World War…Beatty’s sharp humour challenges pieties from all sides, while never losing sight of the fundamental issue: America’s racism and the legacy of slavery. Intelligent and entertaining.’

‘Not for the faint-hearted.’

‘Both riotously experimental and touching…erudite…and viscerally engaging…Exceptional comic writing makes the skeletal plotting work…Beatty’s inspiring new novel about the impossibility of “post-racial” anything in America is much more than “scathing” – it is constructive.’

‘There’s satire and then there’s satire, and without question Paul Beatty’s caustic third novel, The Sellout, definitely falls into the latter category…brutally honest and very funny’.

‘Both riotously experimental and touching…erudite…and viscerally engaging…Exceptional comic writing makes the skeletal plotting work…Beatty’s inspiring new novel about the impossibility of “post-racial” anything in America is much more than “scathing” – it is constructive’.

‘Beatty is an original and irreverent talent’.

‘The longer you stare at Beatty’s pages, the smarter you’ll get.’

‘[A] howl-a-passage assault on the pieties of race debates in America…outrageous, hilarious and profound…It takes a whole other level of sheer audacity to expose atrocious things through the play of wit. Beatty plays for high stakes – but he wins. His brilliant, beautiful and weirdly poignant book knocks the stuffing out of right-thinking solemnities and he delivers droll wisdoms besides which the most elevated rants…pale into ponderous sententiousness…Juiciness stains every lovely page of Beatty’s mad, marvellous, toothsome book.’

'[An] outrageous, riff-strewn satire on race in America…[The Sellout] combines effervescent comedy and stinging critique, but its most arresting quality is the lively humanity of its characters.’

‘Scarysmart…A hell of a ride.’

‘[The Sellout] is among the most important and difficult American novels written in the 21st century…It is a bruising novel that readers will likely never forget.’

'I am glad that I read this insane book alone, with no one watching, because I fell apart with envy, hysterics, and flat-out awe. Is there a more fiercely brilliant and scathingly hilarious American novelist than Paul Beatty?’

‘Let’s get this out of the way: The Sellout is a work of genius, a satirical opus on race in 21st-century America.’

'‘[The Sellout] may end up being the smartest, funniest, and most important novel of 2016.’

‘Had we been granted a chunk of pages in this magazine to extol the virtues of Paul Beatty’s uproarious new novel, The Sellout, we could’ve easily and gladly filled them – much as Beatty floods his 288-page racial satire with blistering comic flourishes.’

‘The Sellout isn’t just one of the most hilarious American novels in years, it also might be the first truly great satirical novel of the century…[It] is a comic masterpiece, but it’s much more than just that-it’s one of the smartest and most honest reflections on race and identity in America in a very long time.’

‘Beatty creates a wicked satire that pokes fun at all that is sacred to life in the United States…His story is full of the unexpected, resulting in absurd and hilarious drama.’

'As Mark Twain so ably showed us, America…is rich with material worthy of ridicule. But where is today’s Twain? The answer is Paul Beatty…Beatty has written a wild new book, an uproariously funny, deliciously profane and ferociously intelligent send-up of so much of our culture.’

‘Beatty is funny as hell…Behind all the humor, however, Beatty asks important questions about racism and identity. The Sellout is a knock-out punch.’

‘[Beatty] is back with his most penetratingly satirical novel yet …[A] daring, razor-sharp novel from a writer with talent to burn.’

‘Beatty, author of the deservedly highly praised The White Boy Shuffle (1996), here outdoes himself and possibly everybody else in a send-up of race, popular culture, and politics in today's America . . . Beatty hits on all cylinders in a darkly funny, dead-on-target, elegantly written satire . . . [The Sellout] is frequently laugh-out-loud funny and, in the way of the great ones, profoundly thought provoking. A major contribution.’

‘Paul Beatty has always been one of smartest, funniest, gutsiest writers in America, but The Sellout sets a new standard. It's a spectacular explosion of comic daring, cultural provocation, brilliant, hilarious prose, and genuine heart.’

– Sam Lipsyte, author of The Ask

‘A brutally fun read, but don't misunderstand it as unserious…Beatty delivers brilliant humour with a caustic bite, and parts can be uncomfortable to sit through…But it was unlike anything else I’d read before, at once side-splitting and thought-provoking. It’s a book that forcibly ejects you out of your comfort zone, and once you’re there, you’re going to want to linger a while.’

‘Beatty's towering talent proves there's no subject, no matter how infuriatingly unjust, how outrageously sorrowful, which can’t be made to glitter like gold in the hands of a brilliant writer.’

‘Beatty impresses hugely in this mischievous and caustic satire, which buzzes with inventiveness and iconoclasm.’

‘[The Sellout] is the most lacerating American satire in years, fearless in the way that it takes apart our sacred cows and shared delusions. It responds to America’s tortured relationship with race in the past and the present with the mockery it deserves, sprinkling jokes steeped in tragedy throughout.’

‘The first 100 pages of [Paul Beatty’s] new novel, The Sellout, are the most caustic and the most badass first 100 pages of an American novel I’ve read in at least a decade. I gave up underlining the killer bits because my arm began to hurt…The riffs don’t stop coming in this landmark and deeply aware comic novel…[It] puts you down in a place that’s miles from where it picked you up.’

‘Swiftian satire of the highest order…Giddy, scathing and dazzling.’

WINNER OF THE MAN BOOKER PRIZE 2016