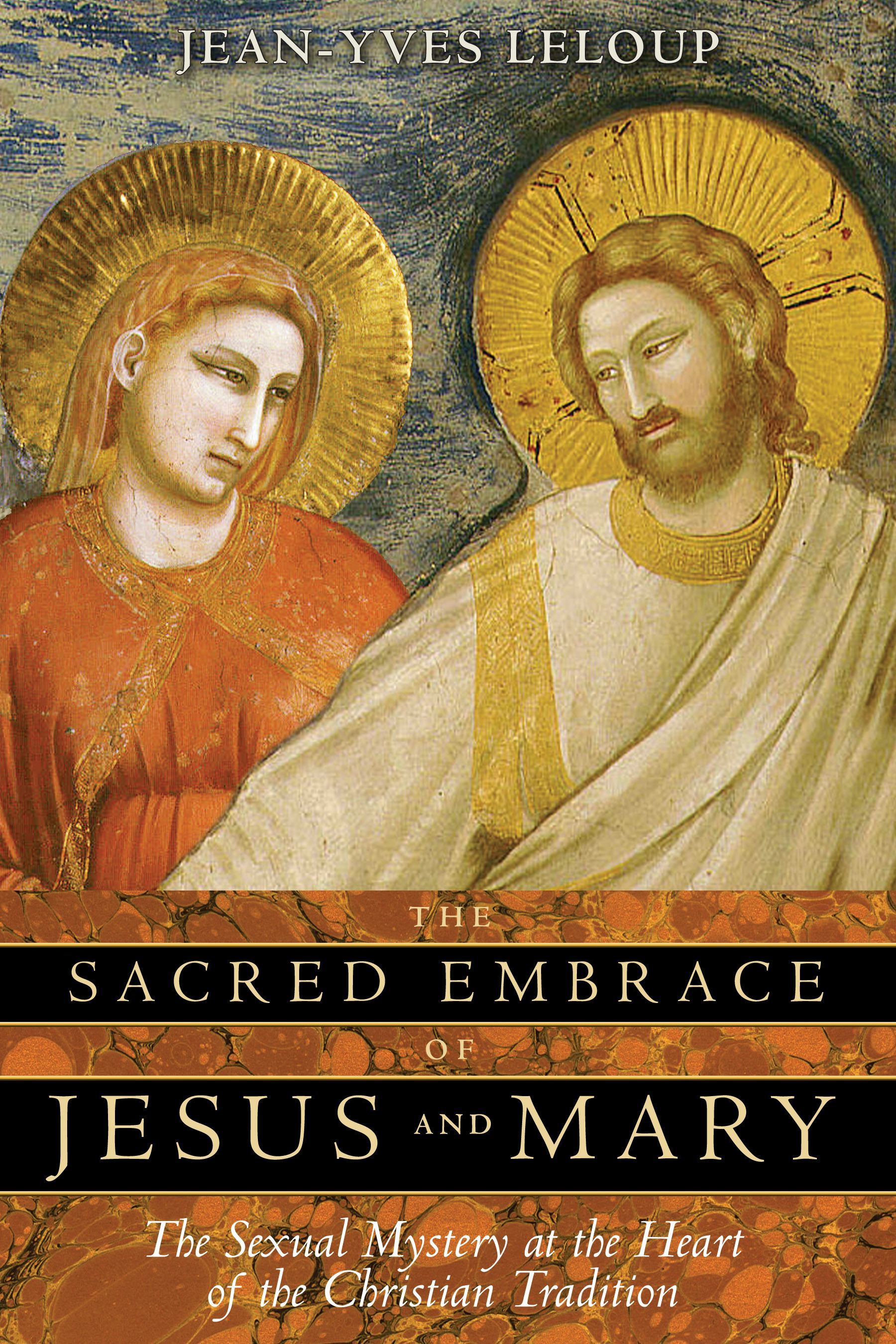 The Sacred Embrace of Jesus and Mary

The Sexual Mystery at the Heart of the Christian Tradition

• Shows that Jesus did not come to redeem humanity from the life of the flesh, but to honor it as a spiritual path

• Uses Hebrew, gnostic, and early Christian source texts to reveal the true context of the words attributed to Jesus

Of all the major religions, Christianity is the only one that has utterly rejected sexuality as one of the many paths that can lead to enlightenment and salvation. But if Jesus was indeed “the Word made flesh” and serious consideration is given to the mystery of his Incarnation, is it reasonable that physical love would have been prohibited to him?

Drawing from the canonical and apocryphal gospels, the Hebrew esoteric tradition, and gnosticism, Jean-Yves Leloup shows that Jesus did not come to save humanity from the life of the flesh but to save the life of the flesh so that it would truly transfigure all people. Leloup explains that when Saint Paul said it was good to be without women, he did not cite any words of Jesus in support of this contention. In fact, Paul’s statement utterly contradicts the words of God in Genesis: “It is not good that man should be alone.” Leloup argues that the elimination of the divine feminine and sacred sexuality set in motion by Paul’s words does not reflect the true teachings of Christ, and that the transformation of Jesus into a celibate is the true heresy. His research restores Christ’s true human sexuality and shows it to be a vital part of humanity’s spirituality. Leloup contends that by understanding the sacred nature of the embrace shared by man and woman as a true reflection of humanity made in God’s image, Christianity can again become the powerful path of transfiguration Christ intended.

The Controversy Regarding Mary Magdalene: Questions and Answers

In none of the gospels is there any mention of Mary Magdalene as a prostitute. What is the origin of this image?
Certain Church Fathers, as well as certain gnostics, were--like Dan Brown, author of The Da Vinci Code--endowed with a novelist’s imagination. It is a great pity that some of them used their imagination to degrade this beautiful image of the feminine, thereby degrading women in general. This has resulted in a Christianity without real women; there are only virgins, mothers, or whores. And because it is women who create men, the logical consequence is that there are no real men either; there are only boys, good fathers, and sexually obsessed males. The restitution of the true character of Miriam of Magdala as a companion of Yeshua of Nazareth can help men and women today realize their potential of Ianthropos, their full humanity, which is both flesh and spirit, both human and divine.

Can we really imagine a sexual relationship between Miriam and Yeshua?
Some have imagined it and have created novels or films about it. Personally, I do not “imagine” anything. I do not indulge in such fantasies, any more than I fantasize about the intimate life of my parents, or of my friends . . . all the more reason not to fantasize about the details of the intimacy between Yeshua and Miriam!

Instead, I study all the gospel texts and see that they are consistent with the doctrine of the Incarnation, which tells us that the Logos manifested not only spiritually, or through the Word, but “in the flesh,” as is said in the prologue to the Gospel of John.

But The Da Vinci Code and other texts often cite the Gospel of Philip, which says: “The Teacher loved her [Miriam] more than all the disciples. / He often kissed her on the mouth.”
I have interpreted this sentence in the Jewish religious context of the time, and its various echoes in Hebrew scripture, especially the Song of Songs. To kiss (nashakh in Hebrew) means to “breathe together,” to share the same breath, or spirit (ruach). In spite of the profound intimacy that this implies, it does not, in itself, imply a sexual relationship.

On the other hand, logion 32 of the Gospel of Philip would seem to be more explicit about this question:
There were three who always walked with the Lord: Mary, his mother; the sister of his mother; and Miriam of Magdala, known as his companion [koinonos]; for him, Miriam is a sister, a mother, and a wife [koinonos]. The term koinonos, in both Greek and Coptic, refers to coupling and could be translated as “fiancée,” “companion,” or “spouse.” In this text, Miriam appears as she who shares a “couple” relationship with the Teacher. But the text further states that she is also like a sister and a mother to Yeshua. Hence we cannot accept the limited image of Miriam as “Mrs. Jesus.” She was far more than a wife for him, at least in the way we conventionally understand that term.

In accordance with the doctrine of the Incarnation, the Gospel of Philip reminds us that love has incarnated in a human relationship that cannot have been merely sexual, for it was infused with agape (love that is pure and free), charis (love that is celebration and praise), eunoia (love that is compassion and service), storgè (tenderness), and finally philia, love that includes respect for our respect for each other in all dimensions of being.

This is indeed an “imagining” worth pursuing: an effort to envision the qualities of love that united Yeshua and Miriam. It could help us to imagine other kinds of relationships between men and women today--relationships that are less shallow, that witness the presence of God in our fleeting and impermanent human forms.

Yeshua loved John or Miriam not more than he loved Peter or Judas, but differently. He loved them all with a universal and unconditional love, but he also loved each of them in a unique and particular fashion. Human love can still function while being subsumed in a divine love that includes all beings, even our enemies. It was this love that he proposed to all who would walk with him. Human love consists of preferences, affinities, particular resonances, and intimacies that are not possible with all. When Miriam realized this divine Love, she was no longer a woman who could be possessed, either by man or by demon. She became the faithful, blessedly happy friend of the one who had delivered her. Henceforth she could not be “had,” not even by death itself, for her lover remained faithful to the great life that spoke through him. This new desire of hers was one that he would never betray.

This is how it is with those who give themselves to love. How can they think of anything better, how can they have any concern other than loving even more, giving themselves with no expectation of return?

When you make the two into One,
when you make the inner like the outer and
the high like the low; when you
make male and female into single One,
so that the male is not male and the female is not female;
when you have eyes in your eyes, a hand in your hand,
a foot in your foot, and an icon in your icon,
then you will enter into the Kingdom.
Jean-Yves Leloup

Jean-Yves Leloup is a theologian and founder of the Institute of Other Civilization Studies and the International College of Therapists. His books include Jesus and Judas, The Sacred Embrace of Jesus and Mary, The Gospel of Mary Magdalene, The Gospel of Philip, and The Gospel of Thomas. He lives in France.

“In this remarkable book, we are invited to encounter the real Jesus, who became incarnate in order to embrace and consecrate flesh, offering ‘life abundant’ through a spiritual path of integration. Springing from Jewish tradition, this Jesus celebrates marriage and sexual union as a theophany manifesting the presence of the divine.”

– Margaret Starbird, author of The Woman with the Alabaster Jar and Mary Magdalene, Bride in Exile

“Jean-Yves Leloup’s bold vision of Jesus opens entirely new doors to the understanding of both Jesus’ full humanity and our own human possibility for conscious love.”

– Jacob Needleman, author of The Wisdom of Love and Lost Christianity

"This thoughtful and detailed discussion has a more academic tone than some of his other books and may seem daunting, but fans of Leloup and true seekers of the meaning of love, the holiness of sexuality and the deeper aspects of the relationship between Jesus and Mary won't be disappointed."

"The controversy of Mary Magdalene and her role in the life and teachings of Jesus Christ is presented by Leloup in a well documented, Biblically cited, text that unlike many others on the subject, is written by an Orthodox theologian."

"It is fascinating to follow the development of this ostensible misogyny into the all-pervasive and quite dysfunctional attitude to sexuality as late as this supposedly enlightened 21st century. This is a deeply philosophical work that is rewarding in a number of ways."

"By resorting to canonical and apocryphical scriptures, philosophy and literature [Leloup] is presenting a contemplative philosophical exercise within this theological domains that we recommend with pleasure."

". . . if you are looking for an in-depth perspective on this topic, this book is a great start. . . . Scholarly, but very intense."

The Sacred Embrace of Jesus and Mary

The Sexual Mystery at the Heart of the Christian Tradition