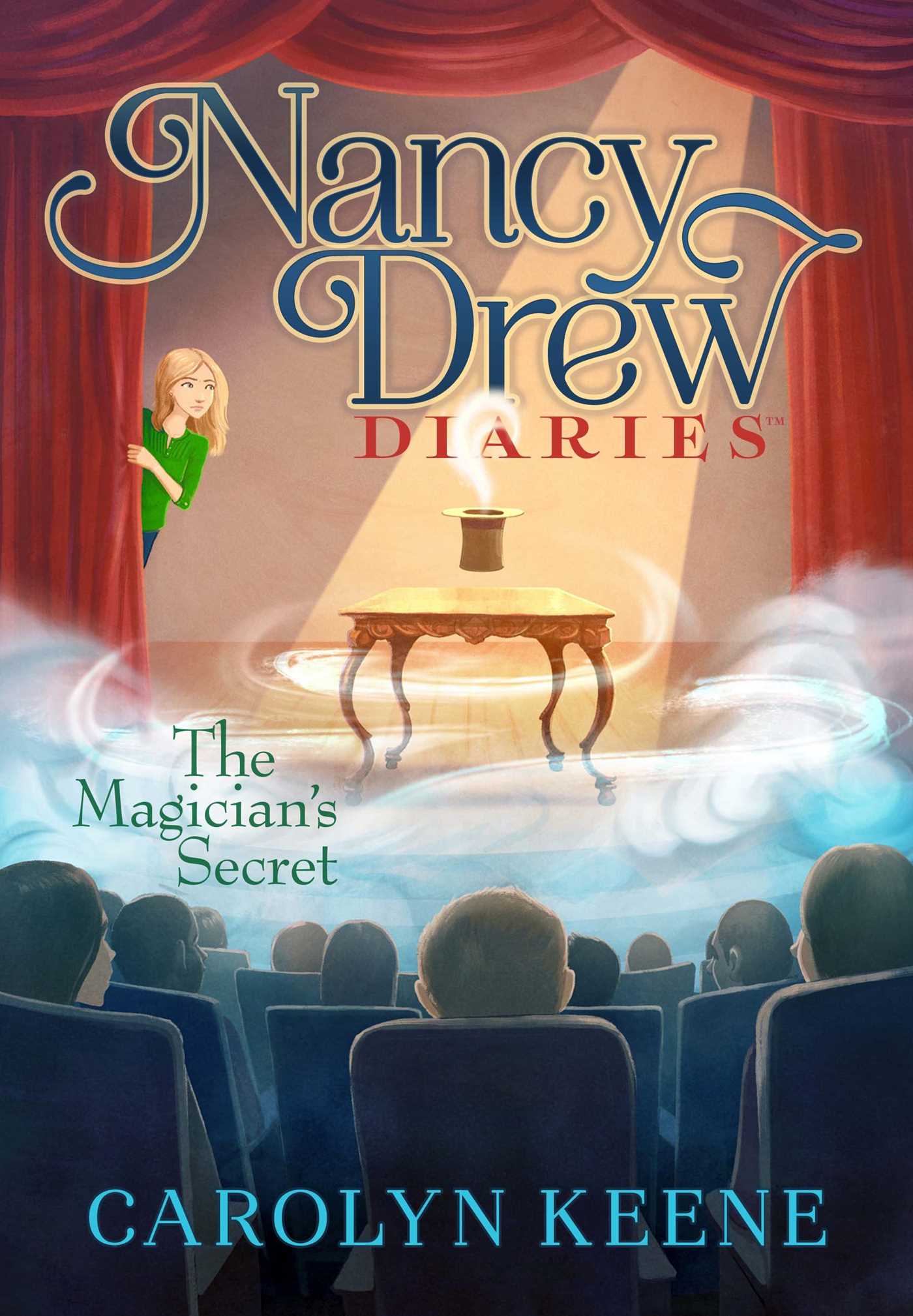 A major magic trick leads to missing murder evidence in this eighth book of the Nancy Drew Diaries, a fresh approach to a classic series.

When she attends a performance by master illusionist Drake Lonestar, Nancy is skeptical. Lonestar is known for his razzle-dazzle wizardry, but can the magician really make the River Heights library disappear?

As it turns out, he can—but that’s not the only thing that goes missing. Key evidence to an upcoming murder trial disappears in the midst of the trick. And one of the trial attorneys just happens to be Nancy’s father, Carson Drew, assisted by her boyfriend, Ned Nickerson.

Nancy, Bess, and George are quick to jump on the case, but not quite quick enough: Lonestar has vanished, too, and not even his closest friends know his whereabouts.

Magic is its own kind of mystery—but is this one Nancy can handle?

The Magician’s Secret CHAPTER ONE

A Magical Day
“I THOUGHT WE HAD PLANS.” I sighed. “This is the third time you’ve canceled.”

My boyfriend, Ned Nickerson, just stood in the front hallway of my house and continued typing a text message into his phone.

He raised his head. “Oh, sorry. I’m in the middle of an important conversation.” He took one more glance at the phone before lowering it to meet my eyes.

“You can’t keep working like this. The stress isn’t good for you.” I squinted, staring at his hair. “In fact, I think I see a strand of gray.”

“No way!” He looked up, startled, then touched his temples.

“Just kidding,” I admitted with a chuckle. “I understand that you have a million things to do. I just wish you could get some time off. Today was supposed to be fun.”

“That’s what you said Thursday,” I replied. “And again yesterday. Now it’s Saturday. You deserve the weekend off.” I put my hands on my hips. “In fact, I’m going to complain to your boss. He’s driving you too hard.”

Ned snorted and grinned. “Good luck.” He tilted his head toward my father’s closed office door. “We both knew I’d be busy when your dad hired me as an intern.” He paused, then added, “I just didn’t realize how busy.”

I knew what he meant. As busy as Ned was, my dad, attorney Carson Drew, was even busier. And his latest case was taking up all his time. My dad was defending a man accused of stealing millions of dollars’ worth of precious gems from a jewelry shop right in our hometown of River Heights. Dad was convinced that his client, John Smallwood, was innocent, but he couldn’t prove it. Not yet, anyway.

Ned glanced down at his hand as his phone began to ring. “I really should—” He looked conflicted between answering what was obviously another important call and continuing the conversation with me.

“Don’t worry.” I picked up my purse from a side table near the front door. “I can go to the show by myself.”

Ned drew his eyebrows together. “Show?”

“The magic show,” I said, looping the purse, a new one my friend Bess had bought me, over my shoulder.

He looked at me blankly.

“Oh, right,” Ned said at last. “You showed me the video of him making the Eiffel Tower vanish.”

“Yes!” I was encouraged. “And the Taj Mahal. And the Sphinx in Egypt. And today, our very own River Heights courthouse.”

Ned was with me now. “I’m so sorry, Nancy. I totally forgot!”

“Want to change your mind?” I held up the tickets and wiggled them in front of him. “We could sneak out the back door.”

Just when I thought I had convinced him, my dad’s office door opened.

“Ned! Oh, good, there you are.” My father walked into the foyer, past me, straight up to my boyfriend. Like Ned, he was wearing a suit, even though they were only working from our house. “You aren’t answering your phone. What’s the status?”

“I’m on it, Mr. Drew,” Ned said, grasping his phone with tight knuckles. “The courthouse is closed today, but I called Judge Nguyen’s clerk at home. She says the materials were transferred out of the judge’s chambers to an evidence locker in the basement.”

“It’s your job to get us in to see that box.” My dad tapped his toe and wrinkled his brow. “Immediately.”

“I’m doing my best,” Ned said. “The clerk is checking to find out if the locker can be opened later today. I’m expecting a call back any minute.”

“I hope she hurries,” Dad replied.

“Me too,” Ned said, then turned to me. “The police gathered evidence at the crime scene. Papers and documents along with the jewelry shop’s security tapes were put into crates and sealed. Then the crates were counted and cataloged at the judge’s office.”

“That’s all perfectly normal. It’s a big case,” my dad put in. “The judge is keeping a personal eye on everything. Lawyers are only allowed to review the materials at certain times. When I went over there yesterday, Mr. Walton was there too.” He frowned. I knew my father had worked with prosecuting attorney Ted Walton before, and he didn’t trust him.

Ned continued, “The police also collected materials from Mr. Smallwood’s hotel room. Along with clothes and papers, they found a locked box. No one could figure out how to open it without breaking in, and with so little time to review the materials, the box was put aside.” He sighed.

“The police think the stolen gems are inside,” Ned said.

“They don’t know that for sure,” my dad cut in. “The prosecution is basing the whole case on assumptions. That’s why it’s so important that we open the box.”

“Did you ask Mr. Smallwood what’s in there?” A feeling bubbled inside me—that same feeling that always happens when a mystery presents itself.

“He doesn’t know, but he insists that the box isn’t his,” Ned replied.

“Where did it come from, then? Whose is it?” I asked. “Does he have an explanation for why it was in his hotel room?”

I blushed but didn’t back down. I’d been solving mysteries my whole life. In fact, there was already a list forming in my head. CLUE: Unopened box. SUSPECT: John Smallwood. My nerve endings popped with excitement as I imagined the lists growing and then diminishing as I crossed off potential suspects and sorted through clues.

My father shook his head. “I wish I had more to tell you. Whatever is in that box might be the very thing to free my client.”

“But if the jewels are inside and it can be proven that the box belongs to Mr. Smallwood, then the box might be the very thing to put your client in jail,” I reminded him.

“At this point, we need to trust that Mr. Smallwood is telling the truth; he didn’t rob the store and the strange box isn’t his. So”—he looked at Ned and tapped his wristwatch—“pretrial hearings start Monday. There’s no time to waste. I found a locksmith who says he can open the box without damaging it; we just need access. Time to get back to it, Ned.”

Ned gave me an apologetic look and, gripping his cell phone, took a step back.

My dad reached into his coat pocket. “Oh, Nancy, I almost forgot. A past client gave me two tickets to this afternoon’s performance of that magic show everyone’s talking about,” he said, handing me an envelope. “I thought you might want to take either Bess or George.”

He said that as if I would be able to take one of my two best friends without taking the other. That would so never happen. Dad would have realized it himself if he hadn’t been so distracted.

Of course, now I had four tickets total, so I could invite them both and still have one left over for Ned. I took the envelope. “Thanks.”

“Great,” he said. “Have fun. I can’t wait to hear all about it at dinner.” He gave me a quick hug, then scooted Ned into his office.

I stood alone in the foyer. Somewhere in the bottom of my purse my cell phone buzzed. It was a text from Ned.

I smiled and quickly typed back, K. HOPE TO SEE YOU THERE.

Then I phoned George and Bess in a three-way call.

“Give me five minutes,” George said after I explained what had happened. “I’ll grab my stuff.” I imagined her throwing a jacket and some loose cash into an old tote bag. “Just pull up out front. I’ll jump in the car and then we can go get Bess.”

“I need at least fifteen minutes!” Bess insisted. “And I call shotgun!”

“I call it again,” Bess argued.

“Whatever,” George replied with a groan.

George Fayne and Bess Marvin were cousins, but no one would ever guess they came from the same genetic material. Where George would show up wearing whatever she found on the floor of her room, dark hair in a tangle, with a tote bag for a purse, Bess would get dressed to the nines, make sure her blond hair was perfectly styled, and change her bag to match whatever outfit she’d selected. Fifteen minutes to Bess meant we’d be waiting for thirty.

“Bess, try to hurry,” I pleaded. “I was hoping to get there a bit early. I want to look around before the show and see if I can figure out how his magic works.”

“Uh-oh. Is this another case for Detective Drew? The Case of the Disappearing Courthouse?” George asked with a giggle.

“Exactly.” I laughed and headed out the door.
Carolyn Keene