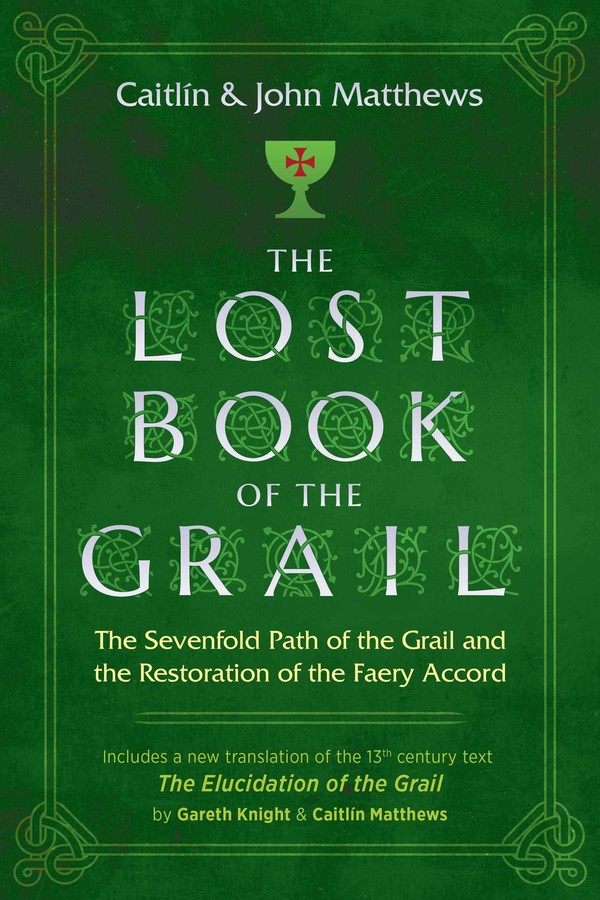 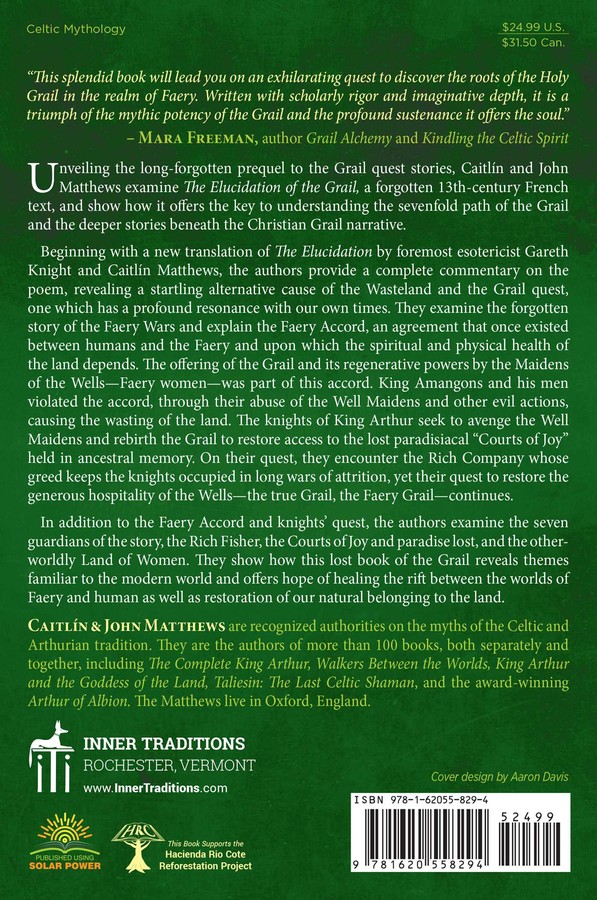 The Lost Book of the Grail

• Includes the complete text of the Grail prequel, The Elucidation of the Grail, a 13th-century poem newly translated by Gareth Knight and Caitlín Matthews

• Discusses the Seven Guardians of the Stories, the Grail Kings and Anti-Grail Kings, the Rich Company, the Courts of Joy, and the otherworldly Land of Women

Unveiling the long-forgotten prequel to the Grail quest stories, Caitlín and John Matthews examine The Elucidation of the Grail, a forgotten 13th-century French text, and show how it offers the key to understanding the sevenfold path of the Grail and the deeper stories beneath the Christian Grail narrative.

Beginning with a new translation of The Elucidation by foremost esotericist Gareth Knight and Caitlín Matthews, the authors provide a complete commentary on the poem, revealing a startling alternative cause of the Wasteland and the Grail quest, one which has a profound resonance with our own times. They examine the forgotten story of the Faery Wars and explain the Faery Accord, an agreement that once existed between humans and the Faery and upon which the spiritual and physical health of the land depends. The offering of the Grail and its regenerative powers by the Maidens of the Wells--Faery women--was part of this Accord. King Amangons and his men violated the Accord, through their abuse of the Well Maidens and other evil actions, causing the wasting of the land. The Knights of King Arthur seek to avenge the Well Maidens and rebirth the Grail to restore access to the lost paradisiacal “Courts of Joy” held in ancestral memory. On their quest, they encounter the Rich Company whose greed keeps the Knights occupied in long wars of attrition, yet their quest to restore the generous hospitality of the Wells--the true Grail, the Faery Grail--continues.

In addition to the Faery Accord and Knights’ quest, the authors examine the Seven Guardians of the Stories, the Rich Fisher, the Courts of Joy and paradise lost, and the otherworldly Land of Women. They show how this lost book of the Grail reveals themes familiar to the modern world and offers hope of healing the rift between the worlds of Faery and human as well as restoration of our natural belonging to the land.

Back in the mid-19th century, with rather less of a flourish of trumpets, the 484 lines that comprise the 13th century French text called The Elucidation were first discovered, bound into the beginning of a manuscript known as the Mons, Bibliotèque communale, no 4568. Within this 13th century French verse text, long seen as a prequel to Chrétien’s Perceval ou Le Conte du Graal, are contained the most astonishing revelations which are never quite elucidated.

The core myth around which The Elucidation dances gives us a completely different causation for the Wasteland from the one we are used to reading in the other Grail texts. Rather than the Dolorous Blow which is struck upon the Grail King, it details how the sacred hospitality of the earth was violated and what results from that violation; it hints at the restoration and healing of the earth but, most disquietingly, it also reveals what happens when that sacred hospitality is not taken to heart. The other astonishing thing that this small text does is to turn back through time, making it a prequel of a mythic order.

A prequel has the power to range through time and space, presuming on our acquaintance with the original story as a foundational basis for understanding, while introducing new matter that interacts with characters and themes already actively in motion. This is certainly the case with the Elucidation, which is why we need to grasp this foundational basis from the outset, for this short poetic story has many windows through time where older and later themes are revisited or freshly introduced.

As with the myth of King Arthur, the Grail myth itself is made up of many individual and different stories, with a central core that is given various treatments and interpretations in the many texts that relate its finding. The many hands that have been at work on the Grail, extending and expanding, collapsing and eliding themes together, have crafted and grafted until a story from Britain has become the lode-bearing deposit of many myths, wherein Passion narratives, faery lore, chivalric adventures, gnostic secrets, and salvific legends all meld together to create a rich mélange. This fusion of myths into one story doesn’t belong to one individual nor to a specific group, but has become a myth from which anyone may learn. The Grail writers, by levelling cultural and spiritual themes with a delightful lack of distinction into one timeless narrative, enable any quester to discover how the relics of the Passion, faery hospitality, knightly honour and Gnostic lore may become part of a day’s quest.

As we approach the Elucidation, this continual unfolding and blending of themes is worth bearing in mind, because then we can find refractions and echoes that enable us to understand and illuminate the text.

Chapter 5. The Real Function of The Elucidation

This leaves us to consider what is the true function of the Elucidation. This brief text--the shortest of all Grail stories--is one that many scholars have marked as unsatisfactory because it doesn’t replicate the party line of the bigger, more impressive Grail texts. It fails to explain or elucidate easily. As a result, the Elucidation has been spoken of with slighting contempt or discarded impatiently as irrelevant to the main trajectory of the more-important Grail corpus. Like the all-important corner-stone that was rejected, the Elucidation proves to be a text that we should never discard, since it is a compendium of them all.

As well, like the nesting boxes of Tolkien’s own world of Middle Earth, in which the Hobbit and the Lord of the Rings are contained within the even bigger framework of the Silmarillion, so, too, the many Grail variants and continuations in their proliferation are somehow contained within the seemingly tiny text of the Elucidation.

This very sense of “little-bigness”-- wherein something apparently small contains something absolutely universal - is the uncanny but unmistakable mark of a true myth, and is a sign that we are involved with Faery lore since, in the otherworld, time and space become of little account when we enter into the heart of the myth.

Collapsed into a mere 484 lines, the whole Grail myth is encompassed within its fragile but adamantine frame in truly mind-shattering ways. Containing the whole myth, the Elucidation requires us to hold in the same story, two forms or appearances of the Grail, in an embrace of total and accepting gnosis, wherein dichotomies collapse under an appreciation of the whole picture.

Within the Elucidation, the parallel traditions of the Faery and Holy Grails sit side by side. Dismissed as a mere afterthought to the Grail myth, this short poem contains the synthesis of the whole Grail myth, honouring both sides of the earlier and later traditions which here meet together, as the storyteller relates:

The good that it served will openly
Be taught to all people.

The task of reconciling the human and faery worlds, and the task of healing the breach between the time-bound world and the timelessness of the Grail realm are not contradictory, but complementary. They each lead us to consider the duties of the human state and our relationship with our original wholeness and holiness - these words have the same meaning, although our dualistic world applies them differently. The Elucidation brings us face to face with the consequences of our actions, the outcome of human greed upon the universe, but it also gives us methods of reconciliation and healing. If we follow the way of our quest, the world will no longer be wasteland.
Caitlín Matthews

“This splendid book will lead you on an exhilarating quest to discover the roots of the Holy Grail in the realm of Faery. Written with scholarly rigor and imaginative depth, it is a triumph of the mythic potency of the Grail and the profound sustenance it offers the soul.”

“Any book written by these authors is worth noting, but this is a real tour de force. The Lost Book of the Grail takes us right into the heart of the Grail tradition. It addresses a key, very cryptic text ironically called The Elucidation, and step-by-step we are invited into its secret heart. We are shown the central act of wounding, which devastates the union between human beings, the sacred land, and the Sidhe, who are guardians of the secret life of the land. We are shown the branches of story that lead us into the restoration of the flowing life and love that are the hallmarks of the presence of the Grail. There is so much in this book; it’s sure to become a classic work for all who seek to heal the wasteland and seek the Grail. Thoroughly recommended.”

– Ian Rees, psychotherapist and program director of the Annwn Foundation

“This book is a wonderful new exploration of a little-known work in the rich cycle of Grail legends that elucidates with a new translation and commentary. A product of scholarly work that shows great erudition, it is also a pleasure to read and easily accessible to the general public. Caitlín and John Matthews are unparalleled experts on the Grail and Arthurian legend. Their work shows a whole range of insight that comes from a lifetime of study.”

“I share the Matthews’ view that The Elucidation draws in large part on authentic Celtic lore, as does the Grail legend. As Welsh scholar Sir John Rees suggested well over a century ago, the poem ‘has a very ancient ring.’ The Lost Book of the Grail not only illuminates but, I believe, rightly emphasizes the contemporary witness of the countryside being tragically subjected to relentless, irreparable destruction.”

– Nikolai Tolstoy, author of The Quest for Merlin and The Mysteries of Stonehenge

“You do not just read this book, you experience it as a seeker. Read it slowly and savor each page as it is amap into the mystery of mysteries. A literary tour de force by the authors.”

"In The Lost Book of the Grail, Caitlin and John Matthews combine scholarship and spirituality brilliantly to reveal a long-forgotten prequel to the grail quest stories. Based on a new translation of The Elucidation by foremost esotericist Gareth Knight and Caitlín Matthews, the authors place this prequel in its proper place within the per-Christian world. An excellent addition to the Grail lore."

The Lost Book of the Grail