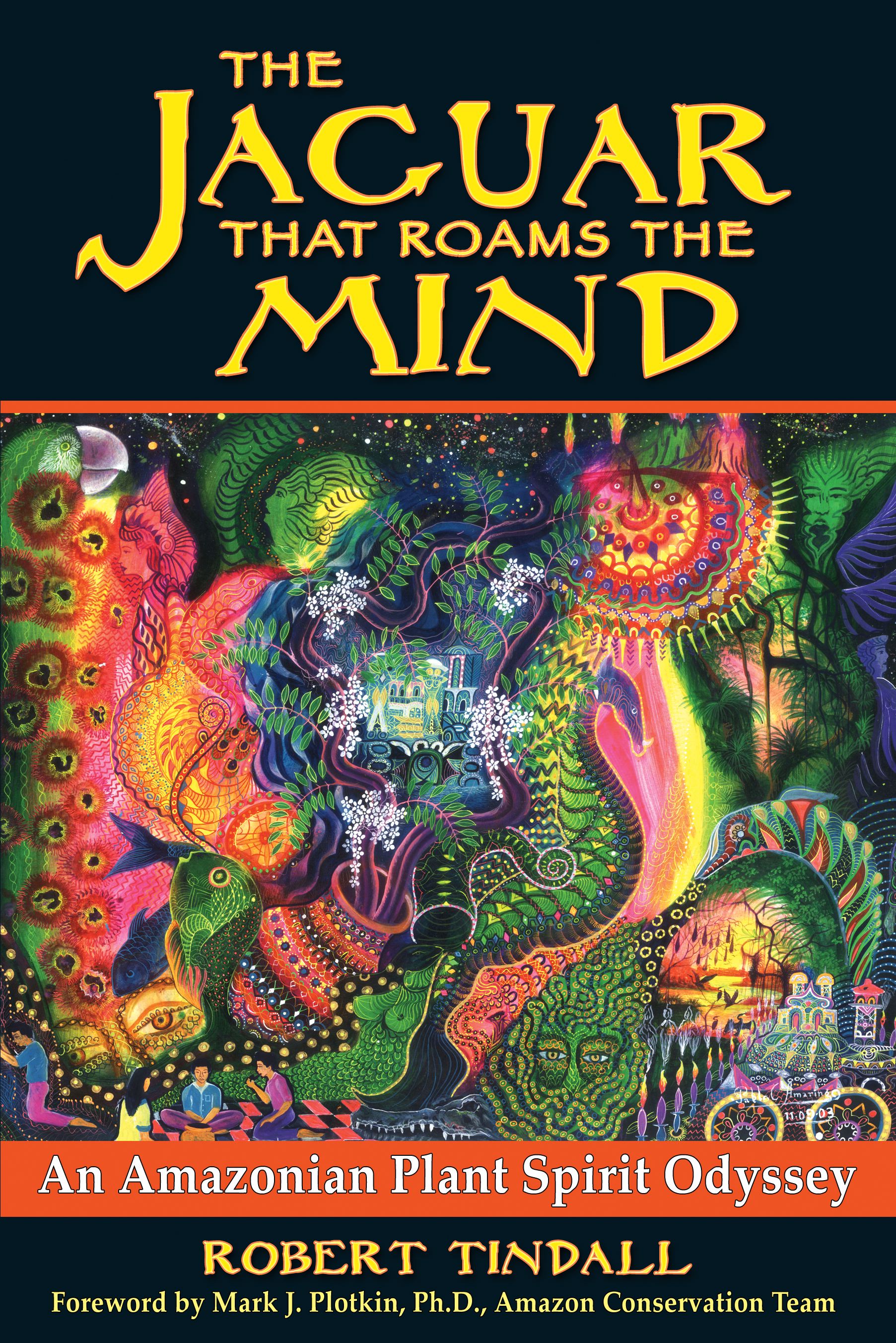 The Jaguar that Roams the Mind

• Shares the experiences of apprenticing with an Ashaninca master shaman

• Reveals the intimate relationship between shamans and plant spirits

The Jaguar that Roams the Mind is a journey into the vanishing world of Amazonian shamanism--an adventure of initiation and return--that explores the unique reality at the heart of the Amazonian healing system. Robert Tindall shares his journeys through the inner and outer landscape of the churches of ayahuasca and with the Kaxinawa Indians in Brazil; his experiences at the pioneering center for the treatment of addiction, Takiwasi, in Peru; and his studies with an Ashaninca master shaman deep in the rainforest jungle.

Moving beyond the scientific approach to medicinal plants, which seeks to reduce them to their chemical constituents, Tindall illustrates the shamans’ intimate relationships with plant spirits. He explores the three pillars of Amazonian shamanism: purging (drawing disease out of the body), psychoactive plants (including the ritual use of ayahuasca), and diet (communing with the innate intelligence of teacher plants). Through trials and revelations, the subtle inner logic of indigenous healing unfolds for him, including the “miraculous” healing of a woman suffering from a brain tumor. Culminating in a ceremony fraught with terror yet ultimately enlightening, Tindall’s journey reveals the crucial component missing from the metaphysics of the West: the understanding and appreciation of the sentience of nature itself.

I was taken to drink. A very ample cup was poured for me. I tossed it down and went and sat, feeling some resistance but not yet clear what it was. I watched the little children of the Forteleza, who danced in their own sections, singing the hymns from memory, and then ran off to play together. Attempting to follow the music, to surrender myself to the experience, I found the reverse was happening.
The monotony of the singing, the concrete, the florescent lights were all becoming unendurable. Why can’t they use natural lights? I complained. It is impossible to travel through florescent lights. It’s a brick wall into the world of spirit. Staring at the concrete pad, I felt absolutely cut off from the earth.
Suddenly my body launched me out of the structure, across the lawn, past someone vomiting in the darkness to the outer perimeter of the compound. Leaning upon a post and looking off into the jungle, I felt torn between worlds. The jungle was out there calling while I was stuck with my obligations within the compound. The human world versus the natural world. As I had done so many times in my life, I leaned against the fence and gazed with yearning into the freedom outside.
My head dropped onto the post. A miração washed over me, and I heard the voice of Grandmother Ayahuasca speaking to me. She said, “You have the ability to transform into an animal. It’s a precious gift you have been given, but not everyone can understand it. You can live in both worlds, the human and the animal, and move back and forth without impedance.”
Deep in dream, I heard the sound of approaching footsteps behind me. Turning around, I saw two men in suits, fardadoes who had come out for me.
Ah yes, the Brazilian imperative to incorporate into the group. “Yes, I am fine. Quite well, actually. Thank you so much for coming to check on me. I will return momentarily . . .” I dissembled, but to no avail. I realized they were concerned that in my state a spirit might attack me or I would be led off by a will-o’-the-wisp into the forest. Surrendering, I returned to the safety of the church, but I knew I was radiating foreignness at the moment. I could not sit with the others, and, finding a seat on the outskirts I clutched my prayer beads, holding on for the rest that was to come.
It came hard, waves of repressed material bubbling up and bursting in my mind. It was the apuração, the stage of purification, the emptying out of the storehouses of consciousness. Working my prayer beads, struggling toward the light, I found myself gesticulating and grimacing and could imagine what I must have looked like to the watchful fardadoes. But there was nothing for it. I was holding on for dear life.
Then a spirit flashed into my consciousness. A face like Apollo, a superhero in green with eternal, beautiful, young man’s vitality. Hermes, messenger of the gods. His piercing eyes met mine and I knew him, and his hand flashed out and he slapped a jewel into my forehead and was gone.
Jewels, of course, have medicinal properties. As the miração unfolded further, I saw people were taking seats in preparation for something. I found myself seated smack in the middle of the congregation, fully integrated back into the human world listening to an impassioned, learned disquisition on the economic history of Acre. The speaker, a university professor, orated without notes, focusing his story around the figure of the seringueiro, the rubber tapper whose impoverished, solitary existence as well as his heartless exploitation by the capitalists and landowners is remembered and honored at the Forteleza.
It was, I realized, a Marxist analysis--or a Christian one--where the poor worker, the least of men, is the fundament of the entire economic superstructure, and as the gospels repeatedly stress, the very person of Christ.
The padrinho sat, his legs crossed like a gentleman, listening with rapt attention, as did the rest of the congregation. As the narrative took up the story of Chico Mendez, given with great veneration and a specificity of detail that reflects the depth of grief still existing within the elders of the community, I realized that the man had been speaking for more than two hours and there was still no sign of restlessness in the group. Nor was his energy flagging, unlike my own. The discourse concluded with a vision of humanity’s collaboration with the forest, of the salvific power now emerging from it, and of economic justice for all people of Acre.
Pushing their chairs to the side, the congregation then leaped to their feet and to reinvigorate themselves began running laps around the church. Standing to the side watching them race by laughing like children, I was again struck by wonder for this frontier of humanity. Where in the United States, I thought, would people sit and attend to a discourse of such depth and vision about their own community and its future? Had the revolutionaries and visionaries of the thirteen colonies once done the same in their meetinghouses and churches?
The speechifying continued far into the morning. I realized through my exhausted haze that the padrinho was welcoming me to the church. Then to my astonishment, in the ultimate gesture of acceptance of me as a visitor, he cried out, “Viva os Estados Unidos!” “Long Live the United States!” There are few places indeed upon this earth where the common people will still cry out for the long life of the United States of America. But now I understood. It is only through veneration of one another that we can awaken to our own true nature.
Robert Tindall

Robert Tindall is a writer, classical guitarist, and inveterate traveler who has lived in England, Argentina, Peru, and Mexico. His work explores themes of pilgrimage and the crossing of frontiers into other cultures and states of consciousness. With his wife, Susana, he leads groups into the Amazon rain forest to encounter the indigenous healing traditions there. In addition to The Jaguar that Roams the Mind, he is the author of The Battle of the Soul in Sir Gawain and the Green Knight. He lives in the San Francisco Bay Area.

“A beautifully crafted account of a man’s psychospiritual healing quest, from his traumatic childhood and early drug addiction, to an ill-fated pilgrimage to the Sahara, to finally finding his path in the depths of the Amazon. Robert Tindall writes with exquisite fluid clarity and fearless, openhearted honesty. The book is a riveting, pleasurable read but is also profoundly sophisticated and deeply informative. I couldn’t put it down.”

“Like the twists and turns of ayahuasca, the sacred vine of the Amazon, this wonderful narrative of love and self-discovery connects vast inner worlds of dream and vision, power and magic, with a passionate pilgrimage in time and space. A joy to read.”

“If you want to know what vegetalismo is really like, you could go to the Amazon, or you could read this book.”

"I invite you to sink your mind into one of the most delectable and rapturous soul-twisters I have read in quite a while. It is completely worth the effort and will leave you permanently changed."

"It is an exploration into the mind of the seeker as Tindall struggles to comprehend the culture around him--and, himself. . . . Well-crafted, this quest of indigenous healing in the Amazon could be read like a novel."

“There are an increasing number of psychospiritual drug narratives that centre around ayahuasca and the Amazon, and while they all retain a great number of similar threads, Tindall’s The Jaguar the Roams the Mind manages to stand out from the crowd; not least because there is a more learned literary repartee being made use of metaphorically. For the scholar of pharmacography this is an excellent example of ayahuasca literature and, for the general reader, it is an illustrative and engaging story that probes both mind and culture.”

The Jaguar that Roams the Mind