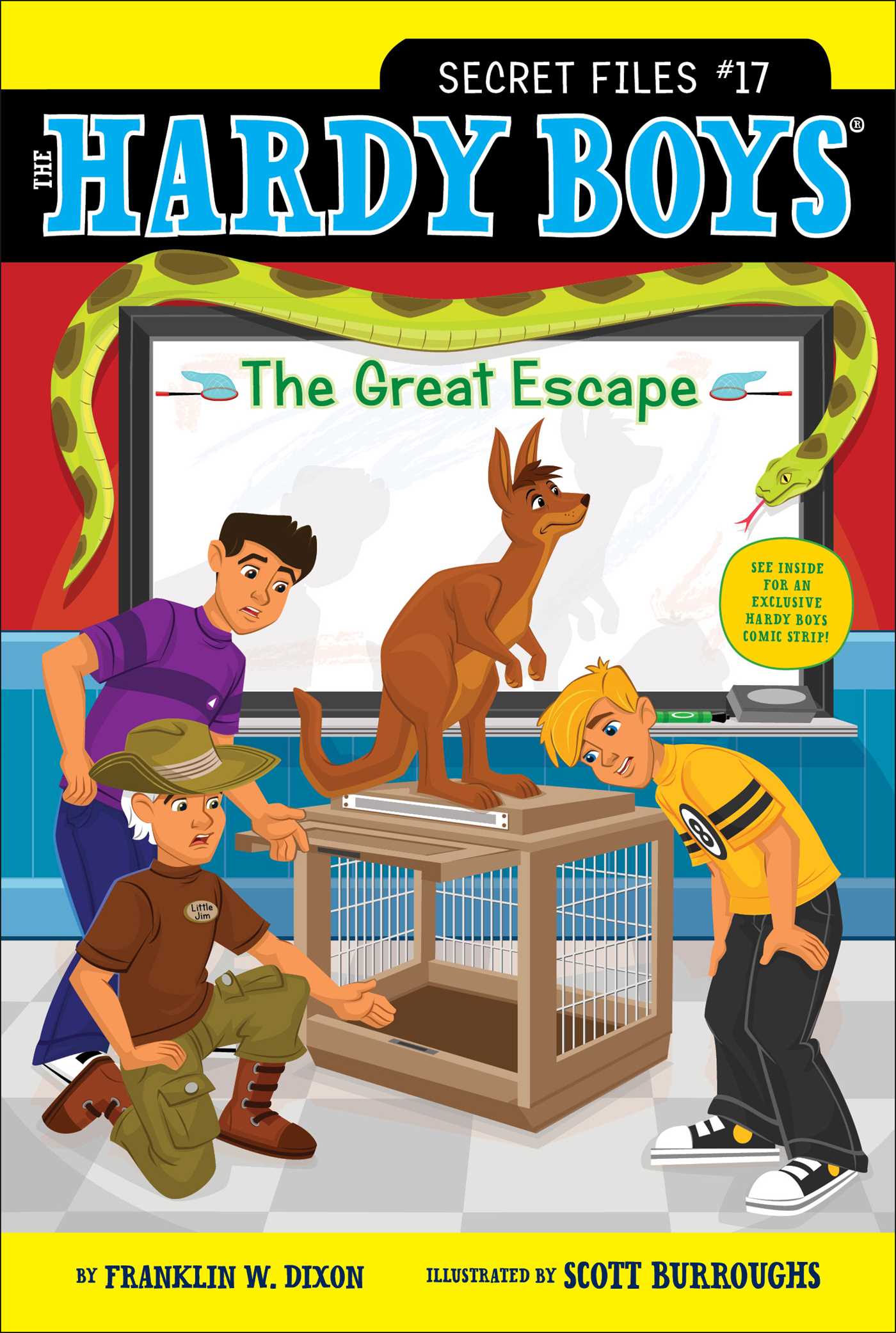 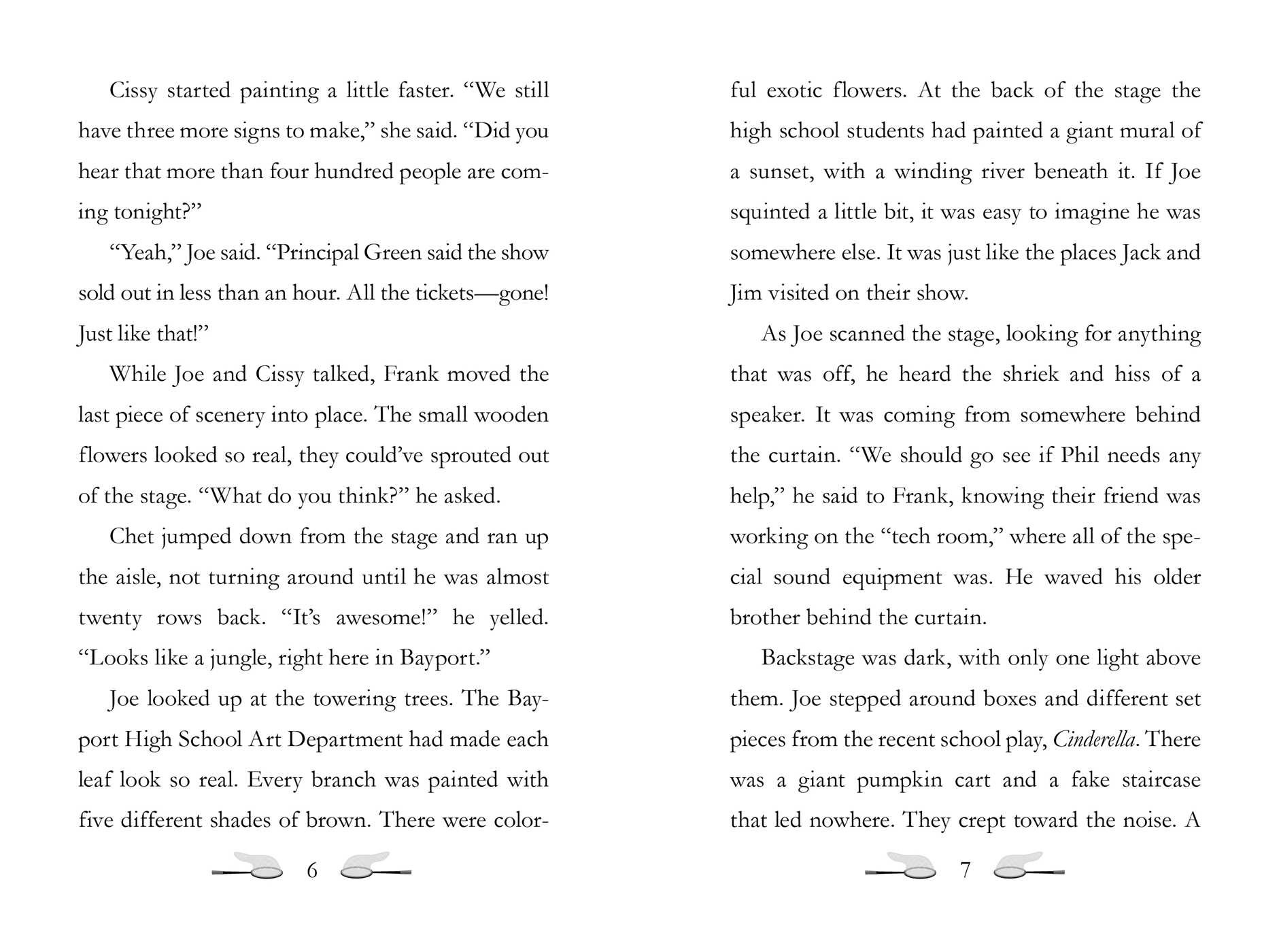 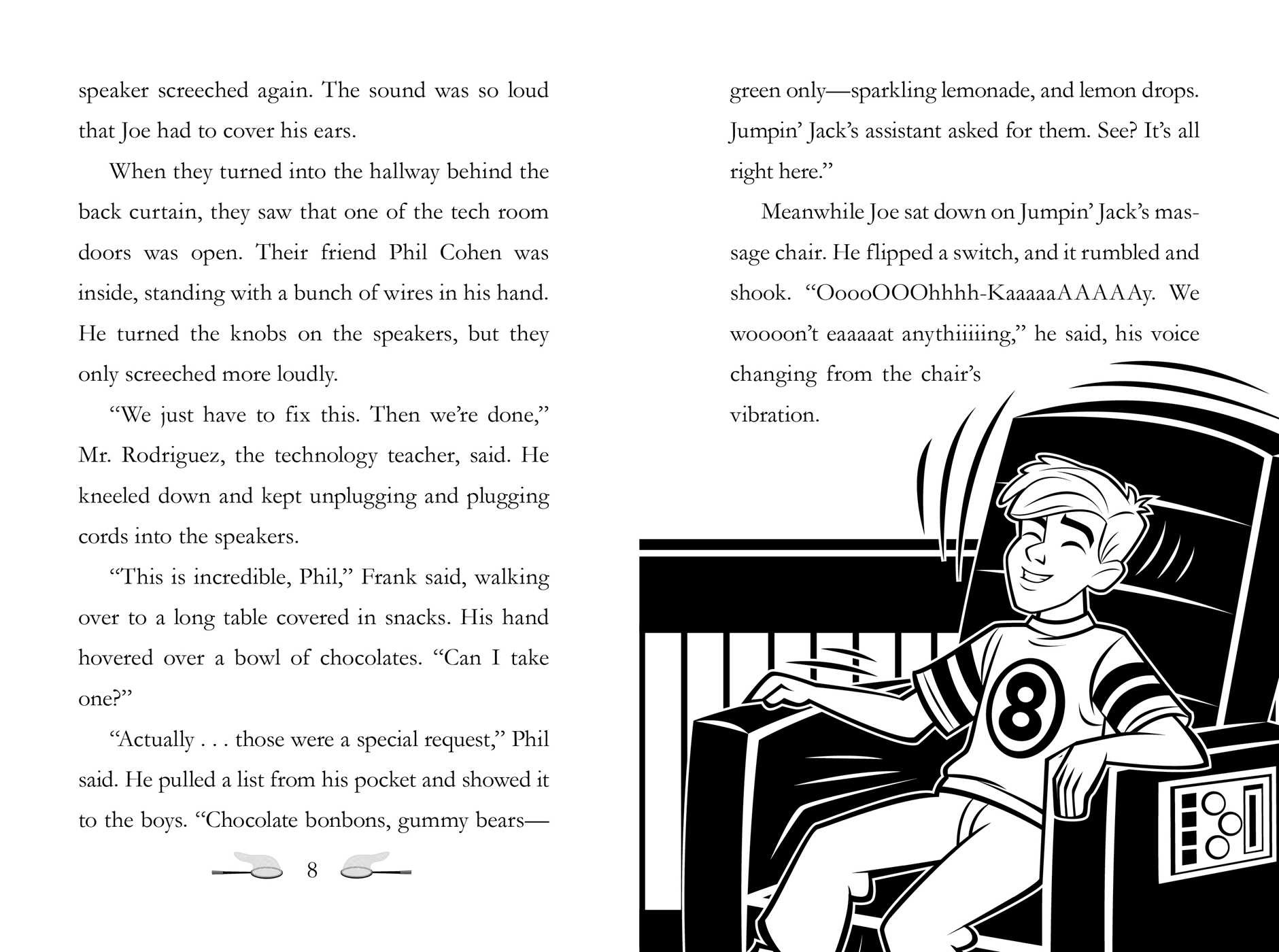 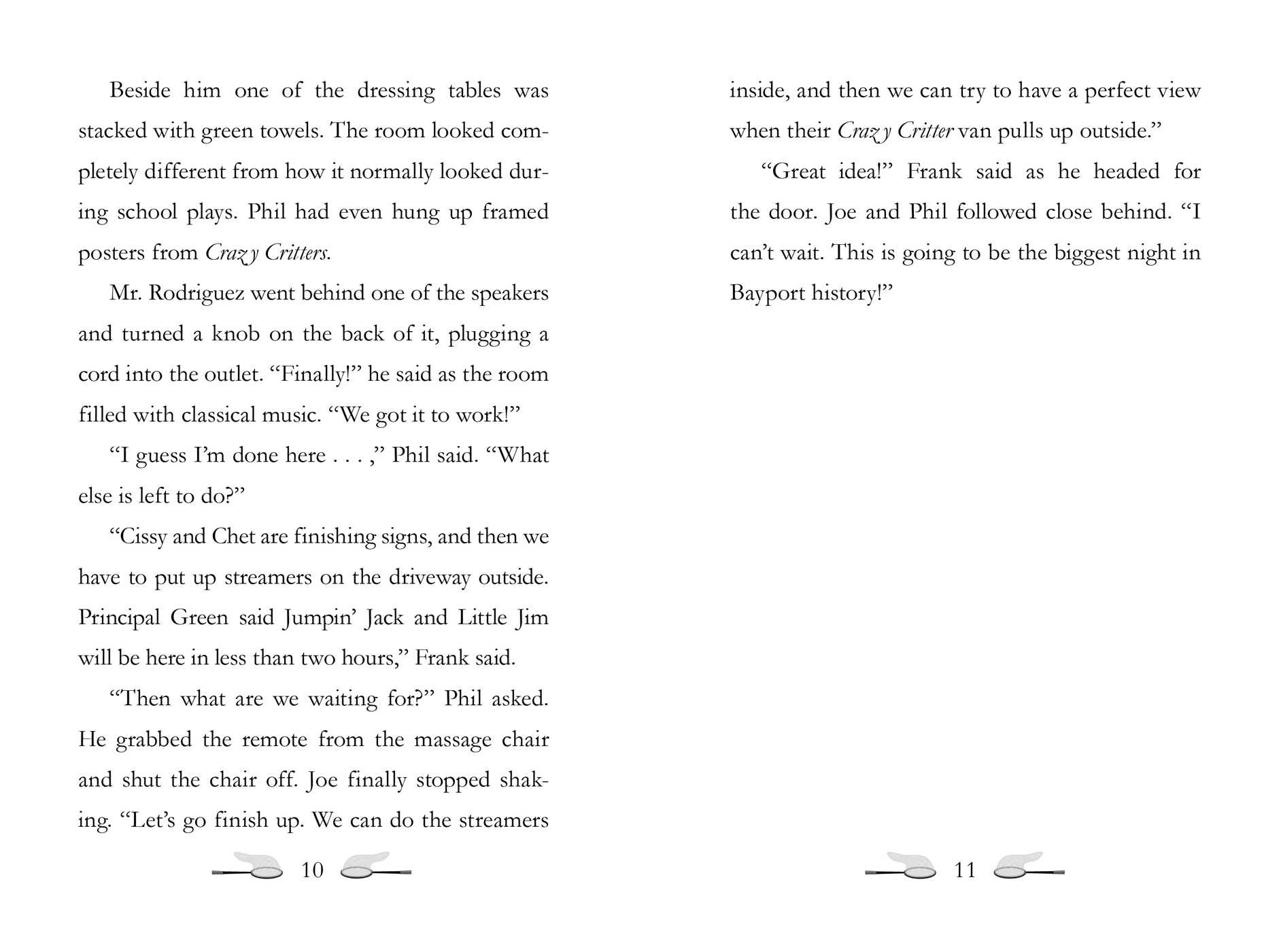 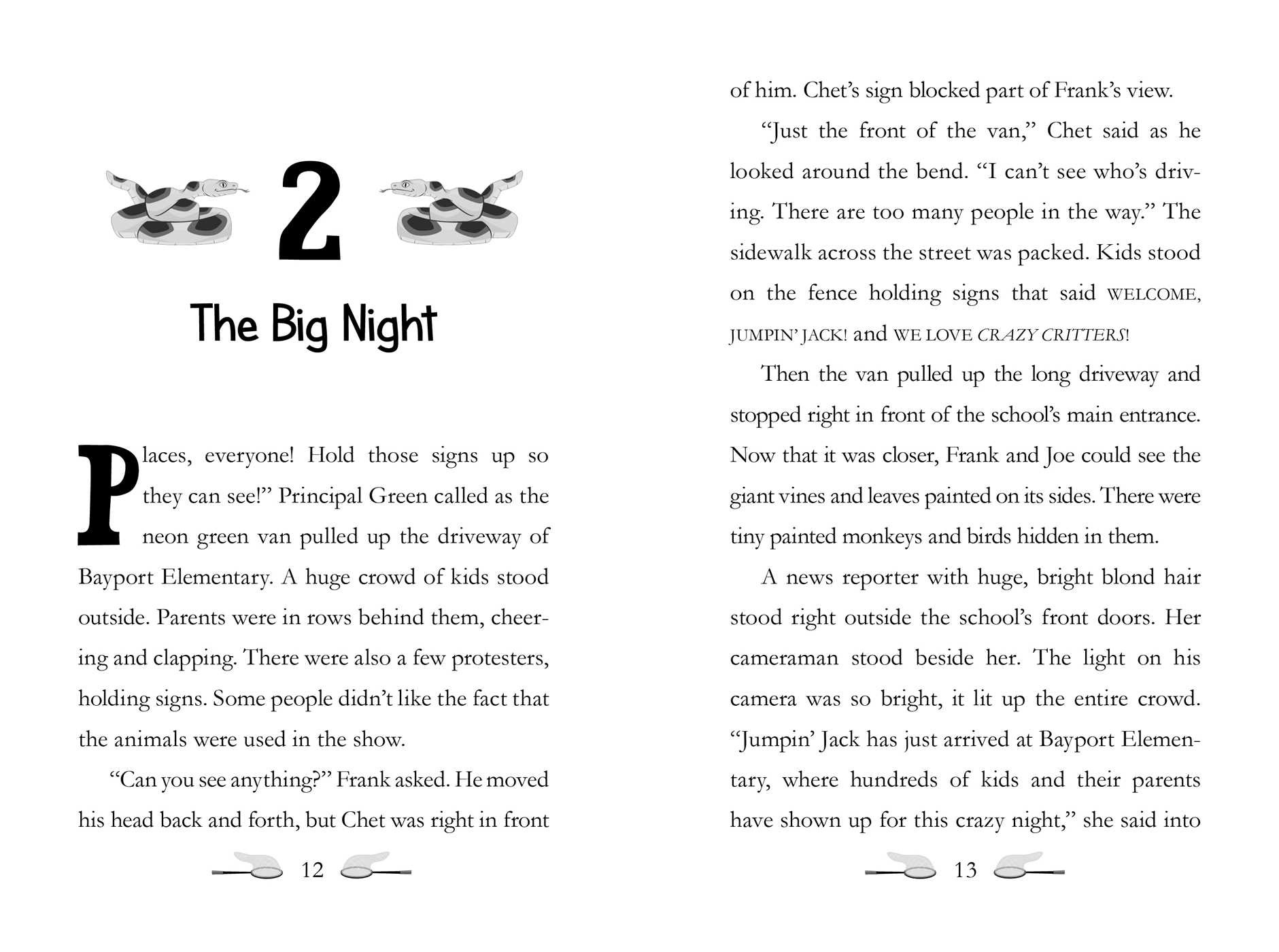 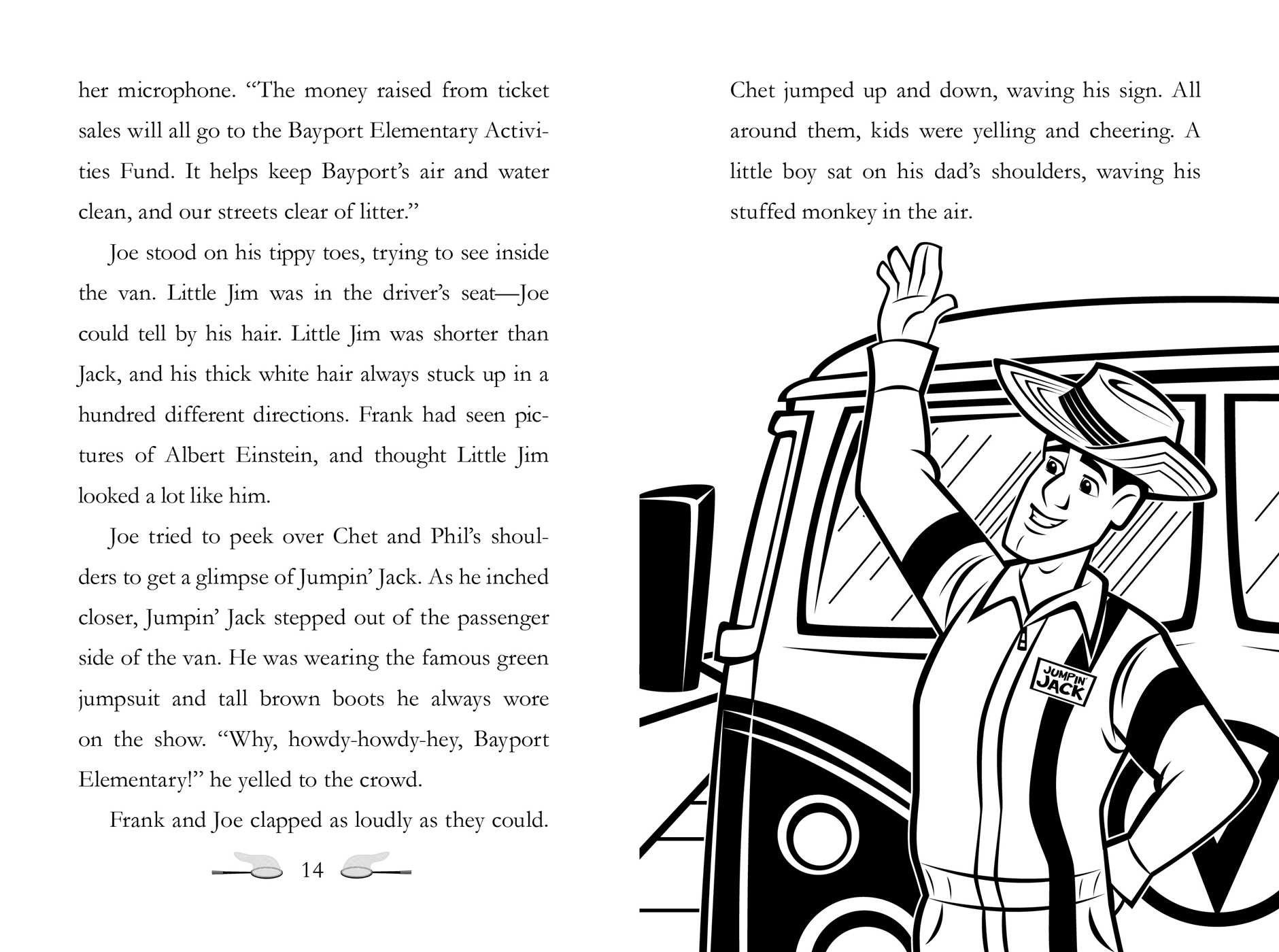 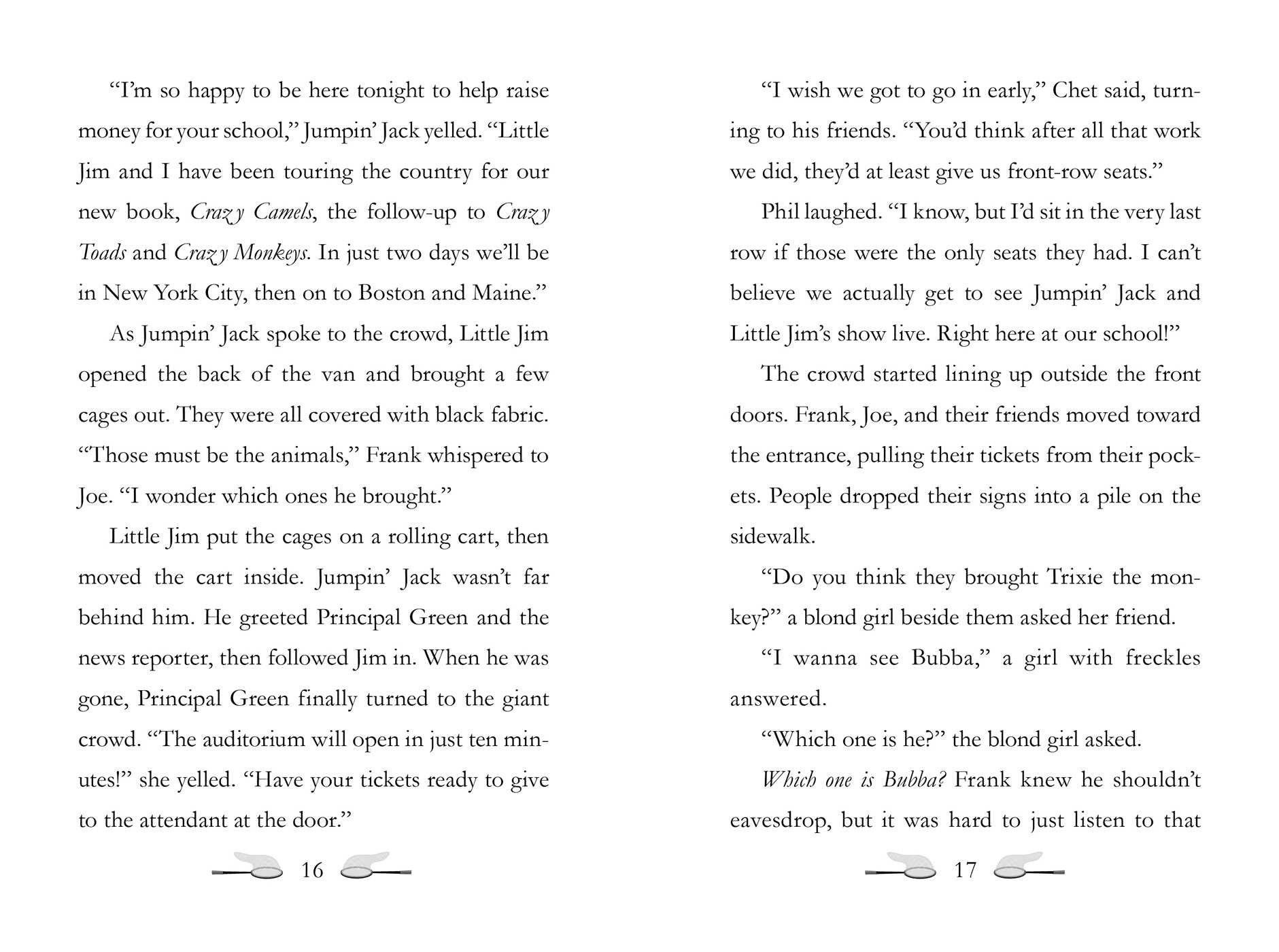 When wildlife celebrities come to Bayport Elementary, Frank and Joe are soon on the case of a missing snake in this Hardy Brothers Secret Files adventure.

Jumpin’ Jack and his son, Little Jim, have been on television for years, taming tigers and wrestling alligators, but now they’re bringing their traveling menagerie to schools—and Bayport Elementary is next!

During the event, they show students a baby kangaroo, a boa constrictor, a flying squirrel and other exotic animals. Frank, Joe, and their friends are all having a great time, until they realize Bubba the Boa is missing! He’s not in his cage or in Jack’s giant van. Can they figure out what happened to this slippery snake before it’s too late?

The Great Escape 1 Welcome, Jumpin’ Jack!
Did you hear that Channel Eleven News is going to be here tonight?” Frank Hardy, holding jungle scenery in both hands, squeezed through the back curtains of the stage in the Bayport Elementary auditorium. The giant wooden tree he was carrying was heavy. His whole face was red.

Luckily, his brother, Joe Hardy, was holding on to the other side of it, helping Frank set it down at the back of the stage. Suddenly it looked as if they were lost in a forest. “It’s the biggest news story this year!” Joe exclaimed. He pointed to a newspaper that was lying offstage. The headline read STARS OF THE HIT TELEVISION SHOW CRAZY CRITTERS COME TO BAYPORT ELEMENTARY!

Frank wiped the sweat from his forehead. “I wonder if Jumpin’ Jack is as crazy in real life as he is on his show—”

“Of course he is!” Chet Morton called from the front of the stage. He was kneeling down, painting a giant sign with Cissy Zermeño. The sign read THE KIDS OF BAYPORT ELEMENTARY WELCOME THE CRAZY CRITTERS GANG!

“I mean . . . who else would make all these special requests? He wanted his own personal massage chair in the dressing room,” Cissy said, and laughed. She sat up, tucking her feet beneath her as she continued to paint. She was wearing neon green high-tops, the laces bright white.

Cissy was talking about the list of things Jack and Jim had requested for their show at Bayport Elementary. Jack’s assistant had sent the list to Principal Green. Jack wanted special snacks for backstage, a massage chair to sit in before and after the show, and green towels to clean up with in case of accidents. (Green was his favorite color.) Frank and Joe’s good friend Phil Cohen was helping put everything together. Even though Frank knew that all the requests were a bit silly, that didn’t change the way he thought of Jumpin’ Jack.

Jumpin’ Jack and his sidekick, Little Jim, had been on television for years, starring in their own show. Frank and Joe had spent hours watching Jumpin’ Jack and Little Jim tame tigers and bears. Jumpin’ Jack had jumped on top of alligators. He’d held giant pythons around his neck and climbed trees in South America. Sometimes it seemed like there was nothing he couldn’t do. Now he was coming to Bayport Elementary with all kinds of wild animals. The show was going to raise money for their school. Frank and Joe had thought someone was playing a joke on them when they’d first heard the news. It had just seemed too good to be true.

Just then Principal Green came through the back doors of the auditorium. She stared at the stage, past the currently empty seats, which would be full later. She scanned the wooden trees and vines Frank and Joe had set up. She watched Cissy and Chet painting signs. Then she walked by a few other kids who were working with the auditorium’s sound system. They’d all stayed after school to help get ready for the big event.

“This looks great. Keep up the good work!” she called out, her voice booming down the aisle. “Jumpin’ Jack and Little Jim will be pulling up at seven o’clock, and the show starts at seven thirty. We have less than two hours to finish!”

Cissy started painting a little faster. “We still have three more signs to make,” she said. “Did you hear that more than four hundred people are coming tonight?”

“Yeah,” Joe said. “Principal Green said the show sold out in less than an hour. All the tickets—gone! Just like that!”

While Joe and Cissy talked, Frank moved the last piece of scenery into place. The small wooden flowers looked so real, they could’ve sprouted out of the stage. “What do you think?” he asked.

Chet jumped down from the stage and ran up the aisle, not turning around until he was almost twenty rows back. “It’s awesome!” he yelled. “Looks like a jungle, right here in Bayport.”

Joe looked up at the towering trees. The Bayport High School Art Department had made each leaf look so real. Every branch was painted with five different shades of brown. There were colorful exotic flowers. At the back of the stage the high school students had painted a giant mural of a sunset, with a winding river beneath it. If Joe squinted a little bit, it was easy to imagine he was somewhere else. It was just like the places Jack and Jim visited on their show.

As Joe scanned the stage, looking for anything that was off, he heard the shriek and hiss of a speaker. It was coming from somewhere behind the curtain. “We should go see if Phil needs any help,” he said to Frank, knowing their friend was working on the “tech room,” where all of the special sound equipment was. He waved his older brother behind the curtain.

Backstage was dark, with only one light above them. Joe stepped around boxes and different set pieces from the recent school play, Cinderella. There was a giant pumpkin cart and a fake staircase that led nowhere. They crept toward the noise. A speaker screeched again. The sound was so loud that Joe had to cover his ears.

When they turned into the hallway behind the back curtain, they saw that one of the tech room doors was open. Their friend Phil Cohen was inside, standing with a bunch of wires in his hand. He turned the knobs on the speakers, but they only screeched more loudly.

“We just have to fix this. Then we’re done,” Mr. Rodriguez, the technology teacher, said. He kneeled down and kept unplugging and plugging cords into the speakers.

“This is incredible, Phil,” Frank said, walking over to a long table covered in snacks. His hand hovered over a bowl of chocolates. “Can I take one?”

“Actually . . . those were a special request,” Phil said. He pulled a list from his pocket and showed it to the boys. “Chocolate bonbons, gummy bears—green only—sparkling lemonade, and lemon drops. Jumpin’ Jack’s assistant asked for them. See? It’s all right here.”

Meanwhile Joe sat down on Jumpin’ Jack’s massage chair. He flipped a switch, and it rumbled and shook. “OoooOOOhhhh-KaaaaaAAAAAy. We woooon’t eaaaaat anythiiiiing,” he said, his voice changing from the chair’s vibration.

Beside him one of the dressing tables was stacked with green towels. The room looked completely different from how it normally looked during school plays. Phil had even hung up framed posters from Crazy Critters.

Mr. Rodriguez went behind one of the speakers and turned a knob on the back of it, plugging a cord into the outlet. “Finally!” he said as the room filled with classical music. “We got it to work!”

“Cissy and Chet are finishing signs, and then we have to put up streamers on the driveway outside. Principal Green said Jumpin’ Jack and Little Jim will be here in less than two hours,” Frank said.

“Then what are we waiting for?” Phil asked. He grabbed the remote from the massage chair and shut the chair off. Joe finally stopped shaking. “Let’s go finish up. We can do the streamers inside, and then we can try to have a perfect view when their Crazy Critter van pulls up outside.”

“Great idea!” Frank said as he headed for the door. Joe and Phil followed close behind. “I can’t wait. This is going to be the biggest night in Bayport history!”
Franklin W. Dixon