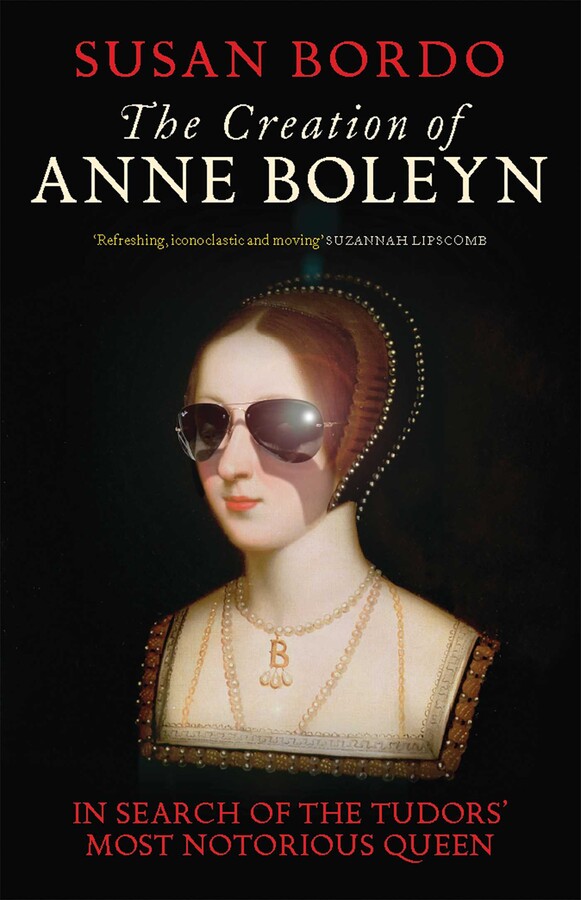 The Creation of Anne Boleyn

In Search of the Tudors' Most Notorious Queen

Part biography, part cultural history, The Creation of Anne Boleyn is a fascinating reconstruction of Anne's life and an illuminating look at her afterlife in the popular imagination.

Why is Anne so compelling? Why has she inspired such extreme reactions? What did she really even look like?! And perhaps the most provocative questions concern Anne's death more than her life. How could Henry order the execution of a once beloved wife? Drawing on scholarship and popular culture Bordo probes the complexities of one of history's most infamous relationships.

In her inimitable, straight-talking style Bordo dares to confront the established histories, stepping off the well-trodden paths of Tudoriana to expertly tease out the human being behind the myths.

Susan Bordo, Otis A. Singletary Chair in the Humanities at the University of Kentucky, is the author of the classic gender studies book Unbearable Weight and The Male Body. She lives in Lexington, Kentucky.

'Bordo rightly observes that the attempt to erase Anne from history had a different result to the one Henry had intended. Deprived of hard facts about her, Anne was not forgotten but instead became a kind of metaphor for successive generations to vent their idée fixes.'

– Suzannah Lipscomb, broadcaster and author of 1536

'An interesting and timely reappraisal'

"By her own confession, philosopher Susan Bordo is obsessed with Anne Boleyn. The very cover of her new book alerts the reader to the fact they are about to experience something more than straightforward history… This isn't just a narrative of the controversies of Anne's life, although Bordo achieves that with clarity and insight, it is an energetic and delightful deconstruction of Anne as an icon, for a post-modern audience…

Without question, this book is going to prove controversial. In fact, it already has. Dismissed by some academics on the basis of the cover alone, considered a travesty and insult to the Queen, its tone of irreverent reverence has already irked some readers used to a more traditional narrative approach. This is a shame, as Bordo's style will embrace a whole new readership and strides boldly into new territory…

Even for those who come to the text with a background in the period, there are still surprising discoveries to be made in the way that the Victorians perceived Anne and her feisty post-war construction…

Perhaps most enjoyable of all is the personal nature of The Creation of Anne Boleyn. Readers are invited to accompany Bordo on her own voyage of discovery, sharing her own experiences in the search for Anne, from being hit by a London bus to her conversations with actress Natalie Dormer… Recent years have seen far too much belittling of popular history and Bordo bravely strides into the no-man's land between serious historical narratives and the perceived "dumbing-down" of shows designed to entertain. The Creation of Anne Boleyn represents a new approach to an old topic, an iconoclastic study of how modern culture has appropriated the sixteenth century for its own purposes. Bordo has reclaimed Anne for a new generation."

'Moving, disconcerting and exhilarating… I loved it.'

'Lively… an interesting and timely reappraisal of representations of Anne in the years since her death.'

'An exposé of Tudor history as tittle-tattle: A jaunty canter through all the wildly differing views of Anne Boleyn across the centuries.'

'With telling quotations and a piquant sense of humour, Susan Bordo offers readers a fascinating and intelligent insight into historical story-telling. Incisive and perceptive.'

– Susan Doran, University of Oxford, author of The Tudor Chronicles

'Bearing her scholarship lightly and writing with fire and wit, Susan Bordo asks a profound question: what is real in history? A smashing book.'

'If you think you know who Anne Boleyn was, think again. Rigorously argued yet deliciously readable...Bordo knocks it out of the park. Brava!'

– Robin Maxwell, author of The Secret Diary of Anne Boleyn and Mademoiselle Boleyn

– Margaret George, author of The Autobiography of Henry VIII and Elizabeth I

'By turns sassy and serious, playful and profound, Susan Bordo cuts through the layers of legend, fantasy and untruth that history and culture have attached to Anne Boleyn, while proving that the facts about that iconic queen are every bit as intriguing as the fictions.'

– Caroline Weber, author of Queen of Fashion: What Marie Antoinette Wore to the Revolution

'Bordo has pulled off an important coup...reminds us that, while history is fascinating, so is the history of history. Enthralling.'

– Derek Wilson, author of A Brief History of Henry VIII

‘Energetic and delightful...Bordo has reclaimed Anne for a new generation.’

– Amy Licence, author of In Bed with the Tudors

One of the top ten royal history books of 2013

'A great read for Boleyn fans and fanatics alike.'

'[Bordo does] a superb job of separating fact from fiction in contemporary accounts of Boleyn’s life, before deftly deconstructing the myriad and contradictory portraits of her that have arisen in the centuries since her death.'

The Creation of Anne Boleyn

In Search of the Tudors' Most Notorious Queen