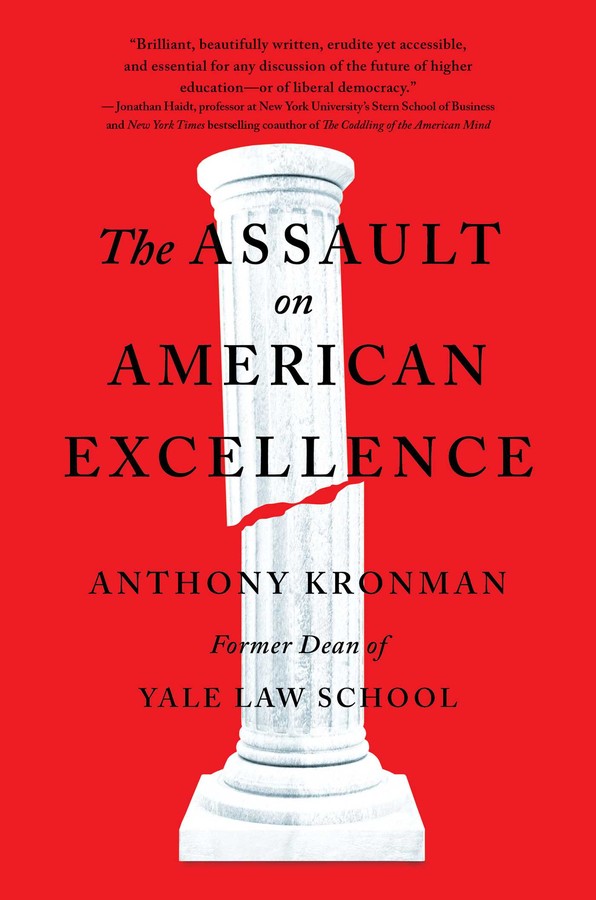 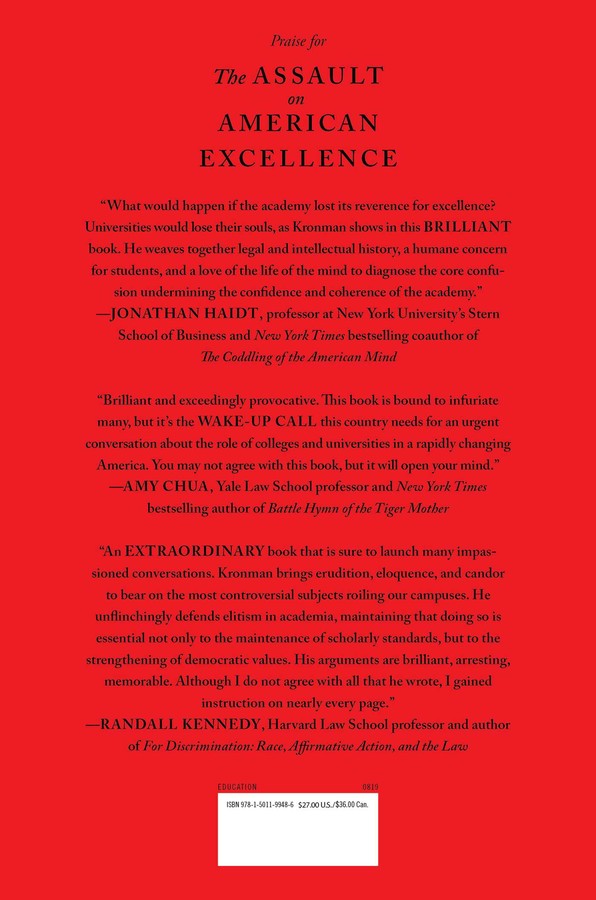 The Assault on American Excellence

The former dean of Yale Law School argues that the feverish egalitarianism gripping college campuses today is out of place at institutions whose job is to prepare citizens to live in a vibrant democracy.

In his tenure at Yale, Anthony Kronman has watched students march across campus to protest the names of buildings and seen colleagues resign over emails about Halloween costumes. He is no stranger to recent confrontations at American universities. But where many see only the suppression of free speech, the babying of students, and the drive to bury the imperfect parts of our history, Kronman recognizes in these on-campus clashes a threat to our democracy.

As Kronman argues in The Assault on American Excellence, the founders of our nation learned over three centuries ago that in order for this country to have a robust democratic government, its citizens have to be trained to have tough skins, to make up their own minds, and to win arguments not on the basis of emotion but because their side is closer to the truth. In other words, to prepare people to choose good leaders, you need to turn them into smart fighters, people who can take hits and think clearly so they’re not manipulated by demagogues.

Kronman is the first to tie today’s campus debates back to the history of American values, drawing on luminaries like Alexis de Tocqueville and John Adams to show how these modern controversies threaten the best of our intellectual traditions. His tone is warm and optimistic, that of a humanist and a lover of the humanities who is passionate about educating students capable of living up to the demands of a thriving democracy.

Incisive and wise, The Assault on American Excellence makes the radical argument that to graduate as good citizens, college students have to be tested in a system that isn’t wholly focused on being good to them. 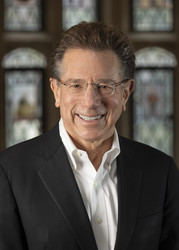 Anthony Kronman is a writer, lawyer, Sterling Professor of Law at Yale Law School, and a former dean of the Yale Law School from 1994–2004. He is the author or coauthor of five books, including The Assault on American Excellence, Education’s End: Why Our Colleges and Universities Have Given Up on the Meaning of Life, and Confessions of a Born-Again Pagan. Professor Kronman taught at the University of Minnesota Law School and the University of Chicago Law School before joining the Yale faculty. Outside of his academic obligations, Kronman served on the board of various non-profit organizations including the Foote School in New Haven, Yale University Press, and the Slifka Center for Jewish Life at Yale. He is a member of Council on Foreign Relations and a Fellow in the American Bar Foundation, the Connecticut Bar Foundation and American Academy of Arts and Sciences.

“The only way to begin any new endeavor is with a sense of excitement about life. In connection to that, Anthony Kronman has a bracing book on American higher education, its purposes and problems. Mr. Kronman, a professor and former dean at Yale Law School, observes the academy in which he's spent his career and doesn't like everything he sees. He is generally progressive yet opposes the leveling produced by the steamroller of prevalent political, cultural and educational attitudes. It is a rich book, densely argued. I want to call it a cry of the heart, but it's more like a cry of the brain, a calm and erudite one.”
— Peggy Noonan, The Wall Street Journal

“Today’s students are not chafing under some bow-tied patriarchal WASP dispensation. Instead, they are the beneficiaries of a system put in place by professors and administrators whose political views are almost uniformly left-wing and whose campus policies indulge nearly every progressive orthodoxy. So why all the rage? The answer lies in the title of Anthony Kronman’s necessary, humane and brave new book: The Assault on American Excellence.”
— Bret Stephens, The New York Times

“What would happen if the academy lost its reverence for excellence and instead took on the virtues and methods of argumentation found in political life? Universities would lose their souls, as Anthony Kronman shows in this brilliant book. He weaves together legal and intellectual history, a humane concern for students, and a love of the life of the mind to diagnose the core confusion undermining the confidence and coherence of the academy. The book is beautifully written, it is erudite yet accessible, and it is essential for any discussion of the future of higher education—or of liberal democracy.”
— Jonathan Haidt, Thomas Cooley Professor of Ethical Leadership at New York University’s Stern School of Business and New York Times bestselling coauthor of The Coddling of the American Mind

“As a new generation of college students gets ready to return to campus, I’m reminded of the late Allan Bloom, the University of Chicago professor… No one had any reason to expect his 1987 book with the stuffy title The Closing of the American Mind: How Higher Education has Failed Democracy and Impoverished the Souls of Today's Students to be a bestseller. But it was… Now decades after Bloom, a new book by Anthony Kronman, former dean of Yale Law School, in some ways picks up where Bloom left off. But Kronman’s book is enlivened by the new era of Black Lives Matter, antifa and a new campus culture that too often values ‘feelings’ and ‘safety’ over the fundamental values of free speech and rational arguments.”
— Clarence Page, Chicago Tribune

“Brilliant and exceedingly provocative. This book is bound to infuriate many, but it’s the wakeup call this country needs for an urgent conversation about the role of colleges and universities in a rapidly changing America. You may not agree with this book, but it will open your mind.”
— Amy Chua, Yale Law professor and New York Times bestselling author of Battle Hymn of the Tiger Mother and Political Tribes: Group Instinct and the Fate of Nations

“Kronman… is flamboyantly undiplomatic. The Assault on American Excellence may well be the most full-throated attack on the academic embrace of diversity produced by a prominent, if former, senior university official in the entire half-century history of affirmative action in higher education.”
— Nicholas Lemann, The New York Times

“What is college for? The answers that colleges themselves give are almost exclusively utilitarian: A college education prepares you to succeed in the global marketplace, trains you to ‘think critically,’ and so on. Anthony Kronman proposes a very different answer. The true purpose of an undergraduate education, he argues in The Assault on American Excellence... is to induct students into an ‘aristocracy’ of soul and mind.”
— Barton Swaim, The Wall Street Journal

“Last month, a Pew Research Center poll found that only half of Americans believe our colleges have a positive impact on the nation… Some of our most esteemed institutions are starting to feel the blowback… But there's been little obvious soul-searching among academics, until now. Anthony Kronman is an academic insider par excellence: a former dean of Yale Law School, a professor there for four decades and a self-proclaimed progressive who cut his political teeth as a student radical in the 1960s...In his new book, The Assault on American Excellence... Kronman tries to coax academia back from the precipice.  Rooting his argument in 2,500 years of philosophical tradition, he wants to convince his colleagues that they must turn away from politics and reclaim their role as protectors of independent thought and the free search for truth.”
— Mary Kay Linge, The New York Post

“Anthony Kronman, former dean of Yale Law School, is fighting for aristocracy—and not the kind made up of gouty men in brocade and powdered wigs, or Wall Street executive in bespoke suits. He believes in the ‘rule of the best’ as America’s top universities have long defined it: an unabashed elitism that elevates ‘character, wisdom, and excellence’ over the pursuit of wealth and power… [H]is discussion of free speech is an essential guide for all who work in higher education today. A seminar discussion is not a debate, not a therapy session, but 'a joint enterprise' in which students and teachers seek truth by collaborating 'in the production of something whose authorship they share’… At its best, this ‘conversational ideal’ is the democratic gateway to Kronman's aristocracy of excellence.”
— Molly Worthen, Yale Alumni Magazine

“An extraordinary book that is sure to launch many impassioned conversations. Kronman brings erudition, eloquence, and candor to bear on the most controversial subjects roiling our campuses. He unflinchingly defends elitism in academia, maintaining that doing so is essential not only to the maintenance of scholarly standards, but to the strengthening of democratic values. His arguments are brilliant, arresting, memorable. Although I do not agree with all that he wrote, I gained instruction on nearly every page.”
— Randall Kennedy, Harvard Law School professor and author of For Discrimination: Race, Affirmative Action, and the Law

The Assault on American Excellence