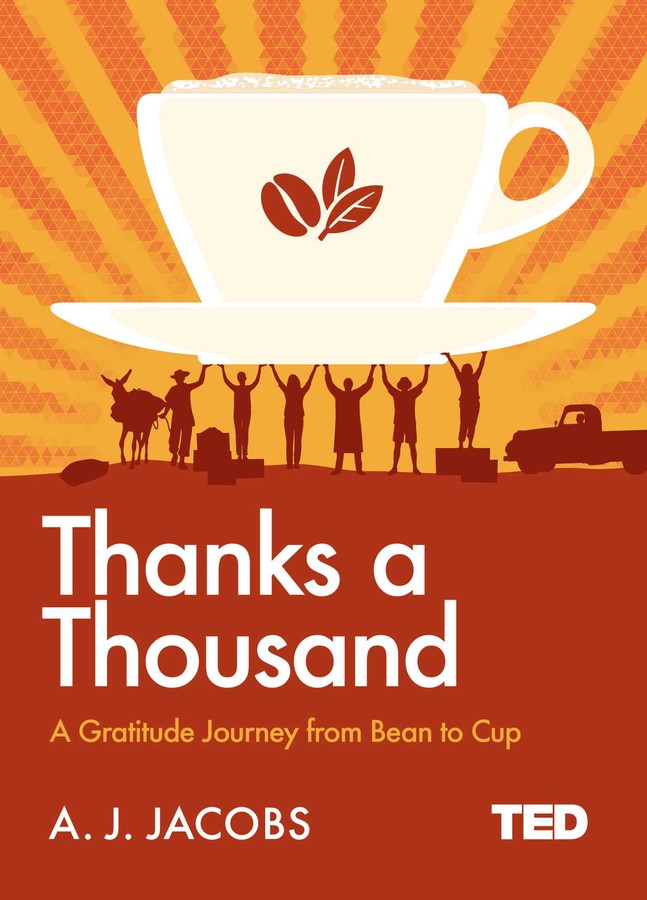 This turns out to be a stunningly large number, including artists, chemists, presidents, mechanics, biologists, miners, smugglers and goatherds. Hundreds of people. Thousands. Maybe more.

Through this seemingly straightforward quest, Jacobs reveals inspiring truths. The book is a reminder of the amazing interconnectedness of our world. It shows us how much we take for granted. It teaches us how gratitude can make our lives happier, kinder and more impactful. And it will inspire readers to follow their own "Gratitude Trails."

Gratitude was not an emotion that came easily to Jacobs. His innate disposition is more Larry David than Tom Hanks. But he knew that gratitude is perhaps the most important key to human happiness, the chief of all virtues, as Cicero said. Science has shown gratitude’s benefits are legion: it helps you sleep, improves your diet, and makes you more likely to recover from illnesses.

Jacobs wanted to inspire his kids to embrace gratitude, so he decided to commit himself to a radical experiment. Over the course of several months, Jacobs went on a journey that took him across continents and up and down the social ladder. He experienced joy, wonder, guilt and depression. He met great characters. He learned just how far-flung are those involved – from the Minnesota miners who get the iron that makes the steel that makes the coffee roasters, to the Madison Avenue marketers who captured his wandering attention for a moment. His adventures include:
A trip to a remote farm in Colombia, where he experienced first-hand how challenging it is to pick the coffee fruits.
Several days with a coffee taster who taught Jacobs the secrets of the trade, and schooled him in the vocabulary that rivals wine sommeliers. (The taster doesn’t just detect notes of apple in his coffee. He says what kind of apple -- Gala? Honeycrisp?)
Because coffee is 98.4 percent water, Jacobs visited the vast upstate reservoirs that supply New York City, and thanked the folks whose homes were destroyed to make way for the lakes.
Jacobs devotes a chapter on the cup-makers, including the rags-to-riches inventor of the “Java Jacket,” that underappreciated cardboard ring you slip over your cup. It has saved millions of fingers and thumbs from burning discomfort, but we never give it a second thought.
The food safety inspectors, who keep our coffee free from an alarming number of diseases and creatures.

Along with entertaining tales, the book is filled with wonderful insights and useful tips. Readers learn how to focus on the hundreds of things that go right every day instead of the handful that go wrong. They read about our culture’s dangerous overemphasis on individuals instead of teams. They learn the art of “savouring meditation”. They learn the pros and cons of globalism. They learn to appreciate the astounding work it takes to create even the most simple items in our lives. There’s even
a gratitude hack to help them fall asleep.